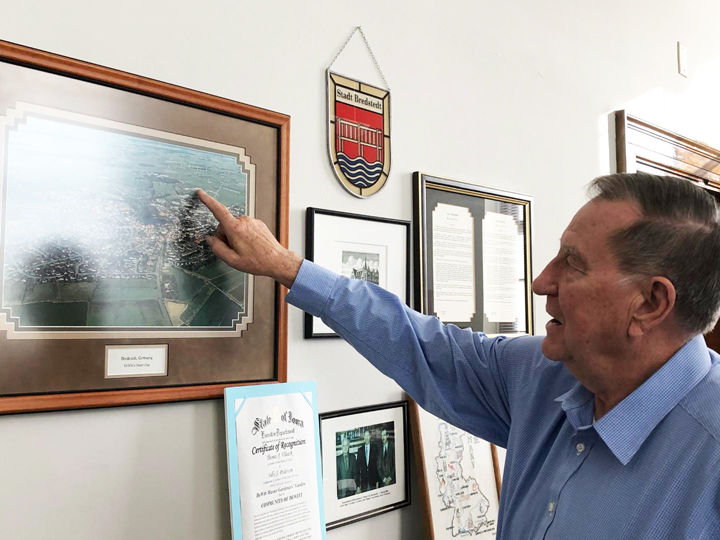 DeWitt Mayor Don Thiltgen points to an overhead photo he has hanging in his office taken of DeWitt’s Sister City, Bredstedt, Germany. He said it is similar in size to DeWitt. Submitted photo 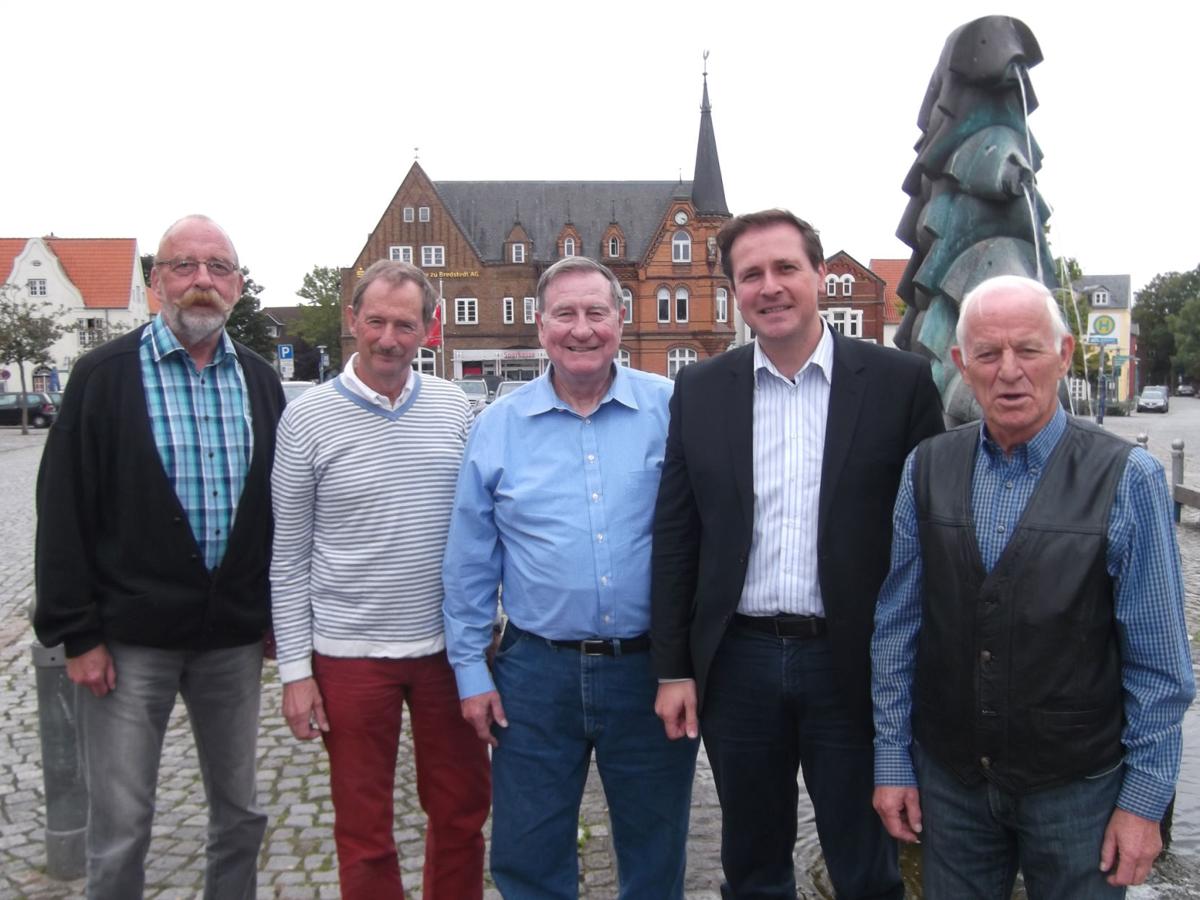 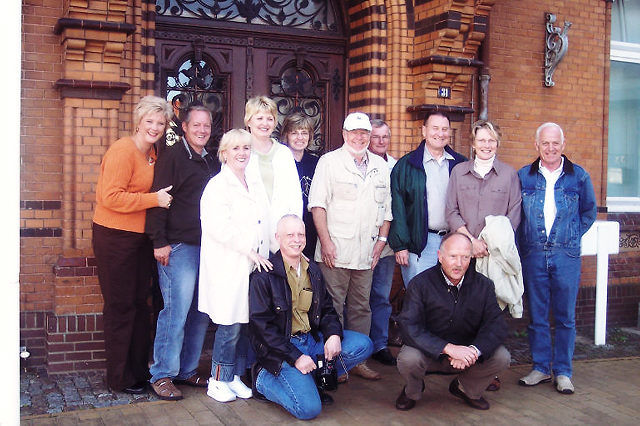 In 2005, area residents including Darrell and Kelly Deutmeyer, of Dubuque; Carole Dunkin, of DeWitt; her sister, Sally Burroughs; and DeWitt Mayor Don Thiltgen and his wife, Peg, traveled to Bredstedt, Germany.

DeWitt Mayor Don Thiltgen points to an overhead photo he has hanging in his office taken of DeWitt’s Sister City, Bredstedt, Germany. He said it is similar in size to DeWitt. Submitted photo

In 2005, area residents including Darrell and Kelly Deutmeyer, of Dubuque; Carole Dunkin, of DeWitt; her sister, Sally Burroughs; and DeWitt Mayor Don Thiltgen and his wife, Peg, traveled to Bredstedt, Germany.

DEWITT — Don Thiltgen hadn’t been mayor of DeWitt for long, when in 2000 he was approached by the late Karl Maas with an intriguing proposition.

Maas resided in DeWitt for more than six decades, and it was where he and his wife, Grete, raised their family. But originally, he was born in Kiel, Germany, and was extremely passionate about his German heritage.

Maas asked Thiltgen if he would be interested in starting a collaboration of sorts — to become a “Sister City” with a community called Bredstedt in Germany, not far from his hometown of Kiel.

Thiltgen said he immediately was on board and eager to explore the idea.

“At that time, about 60% of the people in Clinton County had direct ties to people in Germany,” Thiltgen related. “My mother’s heritage was German as well. It was fairly easy for Karl to talk me into the partnership.”

Members of the City Council at that time, however, were not so receptive.

At least, not at first.

Their initial concern was money, and how much it might cost the city to send the mayor and his guests over to visit Bredstedt or to host German visitors in DeWitt.

But, eager to make the arrangement official, Thiltgen was quick to put their minds at ease.

“When I convinced (the council) that it wouldn’t cost them one nickel of money, they were all for it,” he said with a smile.

Over the years, maintaining the relationship was managed on a volunteer-basis. People opened their homes to visitors, both in DeWitt and Bredstedt, as opposed to paying to stay in hotels.

Maas and Thiltgen reached out to community members, including those in surrounding towns. Residents from Clinton, Delmar, Grand Mound and Goose Lake all offered to be hosts to help their new foreign friends feel right at home.

“We got together a delegation to travel over (to Bredstedt),” Thiltgen explained. “I was unable to go that time, but finally made it over in 2001.”

He traveled at his own expense, and exchanged the proper documentation with the Bredstedt Council and “Burgermeister,” or mayor, at the time, Udo Reichert.

Officials from Bredstedt visited DeWitt the following year. Thiltgen even helped to establish a pen-pal program between students in Bredstedt and Central DeWitt.

In the interest of further involving young people in the partnership, German students came to stay with DeWitt families, including Jim and Jan Nelson and Bob and Gena Owens, in 2005 and 2006.

Gena, now retired after many years of teaching at Ekstrand Elementary, ended up being a positive influence on the teenage foreign exchange student from Germany who stayed with her and her family.

That girl is now a teacher as well in Germany, and the two continue to stay in touch nearly 15 years later.

DeWitt even brought a piece of Germany heritage to town in 2008 in the form of a hausbarn, which is located in Lincoln Park and is home to the DeWitt Chamber and Development Company.

The historic German hausbarn, built in the 1800s, was located near Bredstedt. It was dismantled and transported across the ocean in shipping containers.

It officially was dedicated in October 2009 during DeWitt’s 22nd annual Autumn Fest Celebration.

Thiltgen has remained in touch with past mayors of Bredstedt, which is located in Schleswig-Holstein in northern Germany, near the North Sea and the border with Denmark.

He and his wife, Peg, have cultivated friendships through their travels to and connection with Germany.

After not having been there in a while, Thiltgen decided to return to Germany. A year ago, he and Peg visited some friends near Kiel, which is within an hour’s drive from Bredstedt.

Having recently been in contact with the city’s newest mayor, Christian Schmidt, Thiltgen decided to pay him a visit.

In addition to a kind greeting from Schmidt, Thiltgen also was pleased to learn he had arranged a meeting with the past three mayors of Bredstedt.

Schmidt suggested creating a Facebook page so the Sister Cities could stay in touch and to rekindle the partnership between the two communities.

“We’ve been in touch ever since,” Thiltgen shared.

In fact, a group visit to Bredstedt is now in the planning stages.

Thiltgen said he is looking to have six to 10 people travel to Germany in September 2020.

In turn, residents of Bredstedt are planning to visit DeWitt sometime in 2021.

“I’m working to get the word out whenever I get the chance,” Thiltgen noted. “I’m trying to get people involved through Facebook; we’re putting information on the city’s Facebook page. The mayor in Bredstedt suggested it might be nice to bring one of our volunteer firefighters … I guess they have a really nice fire brigade over there.”

The trip will consist of traveling to Bredstedt, where visitors will stay in residents’ homes for one or two nights. Then, Thiltgen will lead the group on a week-long tour of other areas in Germany, depending on participants’ interests.

He said getting the group established early is important given that Octoberfest is in September and will be happening during the visit. Hotel rooms for the latter part of the trip will be hard to come by the closer it gets to September.

Anyone who is interested in going to Bredstedt is encouraged to contact Thiltgen at city hall by calling (563) 659-3811, or via email at cdmayor@gmtel.net.

Thiltgen is delighted to re-establish a connection with DeWitt’s Sister City, if for no other reason than it simply feels like home.

“A lot of the food and sayings (in Bredstedt) … they remind me of how I was raised,” he related. “That’s where my roots are. That’s where a lot of people’s roots are, or their relatives’ or friends’ roots are. Besides that, it’s nice to have a cultural connection.

“Having a Sister City is about creating ties, building relationships,” he continued. “People from Germany either visit here, or people from DeWitt go there and they’re comfortable with the culture. Every time I’m there, I feel like I fit in.”

Lucille B. Schroeder, 97, died November 25, 2020, at Crestridge Care Center, Maquoketa. A family service will be held at 2:00 p.m. Friday at Elmwood Cemetery, DeWitt and will be streamed at https://www.facebook.com/schultzfuneralhomes/live. Complete obituary at www.schultzfuneralhomes.com.

Todd Cox, 60, formerly of DeWitt died Wednesday afternoon, November 25, 2020 at University of Iowa Hospital, Iowa City. A Gathering of Family and Friends will be held in the Spring. Complete obituary at www.schultzfuneralhomes.com.