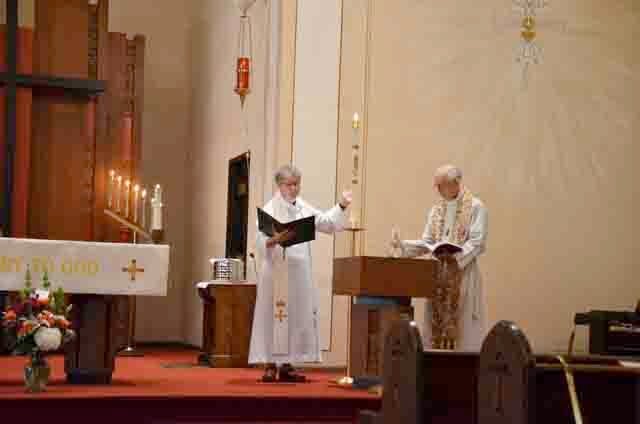 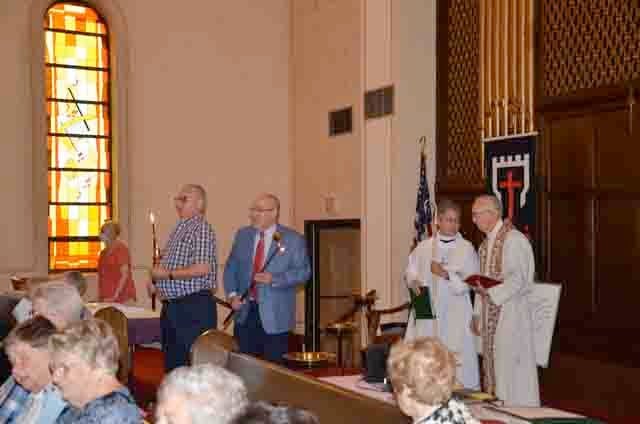 Bishop Amy Current, second from right, and Pastor Paul Holmer, right, prepare for the procession about to start at Immanuel Lutheran Church in Clinton on Sept. 11.

Bishop Amy Current, second from right, and Pastor Paul Holmer, right, prepare for the procession about to start at Immanuel Lutheran Church in Clinton on Sept. 11.

CLINTON — After 150 years of ministry and with a dwindling number of congregants, Immanuel Lutheran Church has formally closed its doors, but in doing so has given a monetary boost to local organizations.

Holy Closure of Immanuel Lutheran Church, 819 S. Fifth St. in Clinton, took place Sept. 11; the service included the distribution of $120,000 of the church’s Legacy Plan in donations to 24 non-profit organizations.

The aging congregation had numbered about 20 members in recent years.

“People don’t go to church like they used to,” Vice President and Treasurer LeAnn DePue says. “I think it was just they knew that we were on our way out and they wanted to make the most of every service that we had.”

DePue adds that she and the remaining members of the congregation wanted to close on their terms while they still had people who remembered what it used to be like. It definitely wasn’t the issue of a lack of money.

“Most churches, when they close, are not in the position that we are and the big reason that we had all the money left was a number of years ago we knew that we were a beneficiary in a will of a woman,” she said.

Assisted by Pastor Paul Holmer and Pastor Mark Luepke, Bishop Amy Current presided over the service attended by about 100 people, including past members who’d long ago moved hours away.

The service began with the hymn “A Mighty Fortress Is Our God,” written by Martin Luther.

“It doesn’t get much more Lutheran than that,” DePue says.

More hymns than usual followed, accompanied by the music of trumpeters, the organ and a piano. A dinner followed the service.

DePue says she tried to begin the service with its sentimental parts and end with its more upbeat material. Still, she was told by Current that she’d seen some people cry. Jan Near thought she would too but was glad she didn’t.

Near’s father had been attending Immanuel Lutheran Church in Moline, Illinois, until he was invited to attend services in Clinton. There, he decided to stay. The seven children he then had also attended the church in Clinton, so Near, now 86 years old, has been a member of the church her entire life, never having attended anywhere else.

She says the pastors at Immanuel Lutheran Church taught her the importance of welcoming people to services, whether they were there for one service only or were to become members for the rest of their lives. Therefore, Near stood at the back of the church before its final service began, welcoming everyone as they entered.

“It was so meaningful, with having the Bishop and the other pastors all there,” Near says. “It was just a nice, beautiful service.”

After Immanuel Lutheran reopened post-Covid, services were only held on the first Sunday of every month for the purpose of giving members the chance to attend services at other churches, which was to make for a more gradual transition to a new place. Regardless of which church that any member now chooses to attend, “I just hope that they are welcomed,” Near says.

DePue actually feels a sense of relief about the church’s closure. While also working as a teacher in DeWitt, she found herself to be one of few able to climb the church’s stairs with ease, so she’s been working hard to empty out everything upstairs to be included in the building’s contents they’ve been trying to give away.

DePue says their church may be dying, but there’s resurrection of it through the use of its gifts.

If they absolutely cannot find anyone to give or sell the building to, it will become the property of the Southeastern Iowa Synod after the official closing of business in December.

Donations made by Immanuel Lutheran Church include: