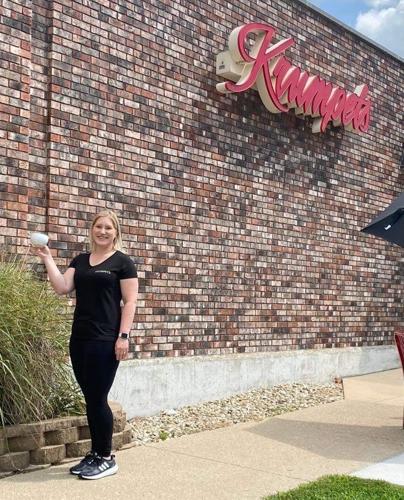 Melanie Kalyan poses outside of Krumpets in Fulton, Ill., near the wall that will feature a mural depicting her profile. 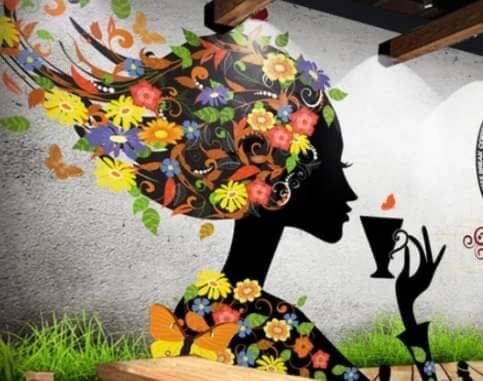 The artwork that inspired Manreet and Melanie Kalyan in selecting the mural design that will be painted on the outside of their business, Krumpets, in Fulton, Ill.

Melanie Kalyan poses outside of Krumpets in Fulton, Ill., near the wall that will feature a mural depicting her profile.

The artwork that inspired Manreet and Melanie Kalyan in selecting the mural design that will be painted on the outside of their business, Krumpets, in Fulton, Ill.

FULTON, Ill. – Manreet and Melanie Kalyan, owners of Krumpets Restaurant and Bakery at 1016 Fourth St., in Fulton, have hired Andrew Holt, of Morrison, Illnois to paint a 32-by-12-foot mural on the southern outside wall of the business later this month.

Having enjoyed Clinton’s recent murals, the Kalyans decided that they wanted something similar in Fulton to brighten the downtown area. More importantly, though, since taking over Krumpets last November, “We’ve been looking for new ways to really reinvent the business, and bring a little bit of my husband and I into it,” Melanie said.

The Kalyans want their business to reflect their passionate support of local artists. Melanie says she and her husband actively seek out ways to work with them, whether it be in the form of selecting a local author’s work for the monthly book club meetings they host in their establishment or booking performances there by local singers. Upon entering the business, customers can see several paintings by local artist Gabi Torres lining the wall. However, Melanie says, even though their passion is evident inside the building, they feel it doesn’t necessarily show on the outside.

Manreet became inspired by an abstract image he’d found of the profile of a woman holding a cup near her lips as if she’s about to take a drink from it while colorful flowers adorn her hair. The image will be recreated with realism on the brick of Krumpets’ facade, depicting the profile of Melanie, Manreet’s wife of 16 years and the face of the business.

Manreet wants the mural to be colorful, symbolizing Melanie’s colorful personality. The artwork will also symbolize Melanie’s Dutch heritage that many others in Fulton will be able to identify with. She says maybe tulips will be painted into her hair, but components of the business will also be represented.

“You might see cookies or cupcakes or scones or some other delicious goodies that, you know, are incorporated into that mural as well.”

Toward the end of August, Holt, a member of Morrison’s Planning and Zoning Commission Board who was recommended to the Kalyans by a customer, will start what Manreet said he indicated to be a two-week long project. When completed, it should easily be able to be seen from the North bridge crossing from Clinton into Fulton. Manreet also said Holt seems very excited about it.

“This gives him an opportunity to highlight his work locally, so it’s been a pleasure for us and for him as well,” Manreet said. “It’s something that I think the downtown really needs.”

Originally fond of the interactive aspect of the mural done on the side of the Midwest Pets For Life building on Fourth Avenue South in Clinton, Melanie believes the more classic imagery they ultimately decided on was the right choice.

“I don’t know if any woman loves the idea of seeing, like, a side of their profile or face,” Melanie says, “but it’s really important for me to challenge my thought process on that too, because I think everyone has something about them that is special and that they should be proud of and I think the imperfections are actually what makes that piece of art even better.”