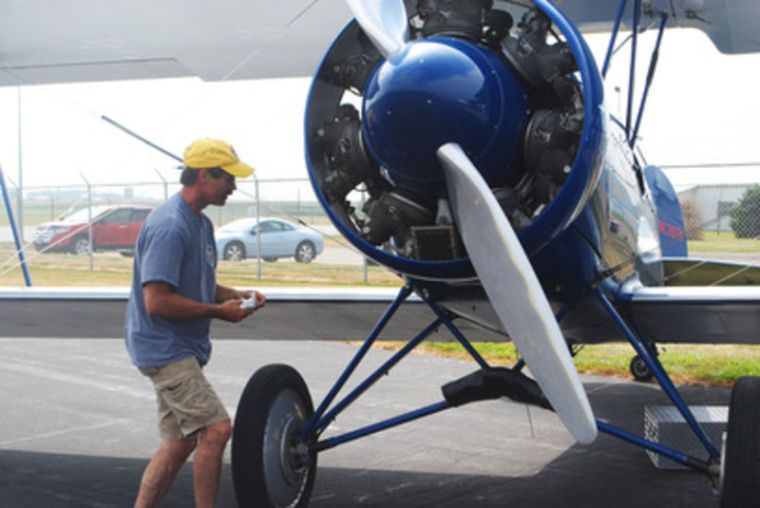 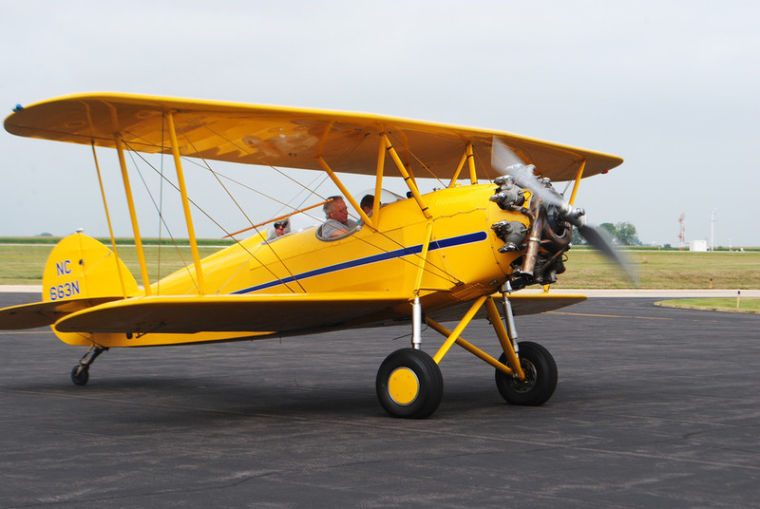 The 1929 WACO Taperwing biplane, piloted by Josh Brownell, gets ready to take off on a tour of the city from up above Thursday at the Clinton Municipal Airport in Clinton. 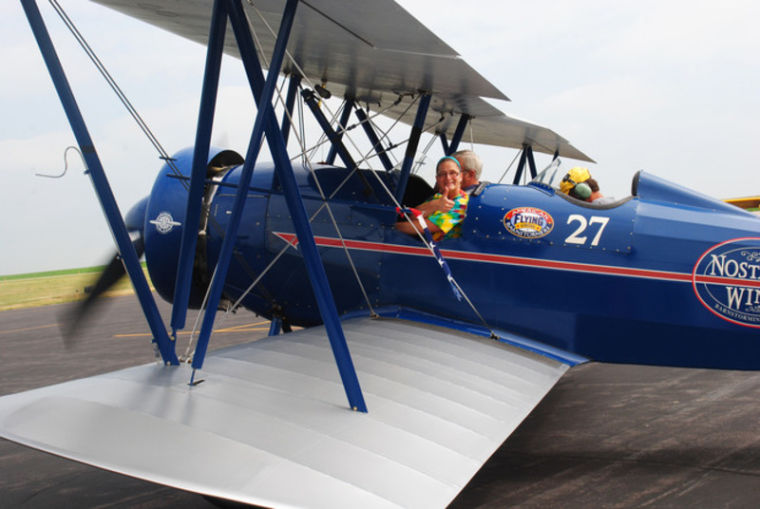 Casey Keister gives a thumbs up to her husband, Tim, and their two children before taking off on a tour in a 1929 Travel Air 4000 open-cockpit biplane Thursday at the Clinton Municipal Airport

The 1929 WACO Taperwing biplane, piloted by Josh Brownell, gets ready to take off on a tour of the city from up above Thursday at the Clinton Municipal Airport in Clinton.

Casey Keister gives a thumbs up to her husband, Tim, and their two children before taking off on a tour in a 1929 Travel Air 4000 open-cockpit biplane Thursday at the Clinton Municipal Airport

CLINTON — The circus had a two-day run in Clinton, but this spectacle did not have a ringleader or trapeze artists.

Inspired by the flying circus of the 1930s, three vintage biplanes from the American Barnstorming Tour arrived at the Clinton Municipal Airport on Wednesday for an extravaganza that offered rides to any and all willing passengers.

The three planes were active Wednesday, totaling out 18 rides for the day. But people were reluctant to come out because of hot temperatures.

“We were hoping for a few more but the heat has been keeping people away,” Gypsy Air Tours co-owner Kerryann DiLoreto said.

Although temperatures were cooler on Thursday, a low cloud ceiling delayed the day’s events for nearly an hour before the sun started to peak out and the clouds began to lift.

Once it became safe to fly, the 1929 WACO Taperwing and pilot Josh Brownell took off into the sky with two eager passengers on board for a once-in-a-lifetime tour of the city.

Tim Keister remembers his experience from last year when the American Barnstorming Tour made a stopover in Clinton and gave him an opportunity to fly in one of the vintage biplanes.

“I had never seen Clinton from the air before,” Keister said. “That was pretty neat.”

He, his wife, Casey, and their two children, Ben and Lila, enjoyed meeting the Barnstormers and exploring all the planes that were on display at the airport.

One of those Barnstormers, Ted Davis, pilots the 1929 New Standard D-25, and has been flying for 37 years.

Although he is a commercial pilot, Davis does not work for an airline but instead uses the New Standard for its intended purpose — giving rides.

“There were only 72 of these made and only seven left that all are flying,” Davis said.

The New Standard is unlike the other two biplanes that were present Thursday because it is designed to give pleasure rides.

The WACO Taperwing and the Travel Air 4000 are both equipped with two passenger seats located in front of the pilot’s seat, but the New Standard holds four passengers.

“These were built for rides,” Davis said. “Back in the 20s and 30s they were a big deal because a lot of people experienced their first airplane ride in one of these.”

The New Standard is larger than the other two planes but is powered by the same size engine, which is surprisingly easy to maintain, according to Brownell.

“These engines were mass produced around World War II so now it is easier to take care of them because it’s not that difficult to find parts,” Brownell said.

Although the biplanes have many similarities, each one offers a different experience and a different captain to go along with it.

One of those captains, Adams, is the heart, soul and foundation of the American Barnstormers.

A commercial pilot with Delta Airlines, Adams has flown 128 different types of airplanes in his 41-year career and says that his 1929 Travel Air 4000 is his favorite to fly.

Because of his love for the open cockpit biplane, he started the American Barnstormers tour in 2006.

“It all started under the wings of this airplane,” Adams said.

His inspiration for the tour came from the old flying circus of the 1930s and his continued passion stems from his love of flying and of his aircraft.

“We’re just caretakers of these planes. Once we sell them someone else becomes the caretaker and it continues,” Adams said. “The worst thing we could see happen is to have these in museums. They are meant to fly, so we need to keep them flying.”

DEWITT [mdash] Jean Gravert, 95, formerly of Delmar, Iowa, passed away peacefully in her daughter's home in Iowa City. Per her wishes, there will be no visitation. A Celebration of Life will be held Sunday, July 25, 2021, from 1:00 until 4:00 p.m. at Grossman Hall in Delmar. Arrangements are…