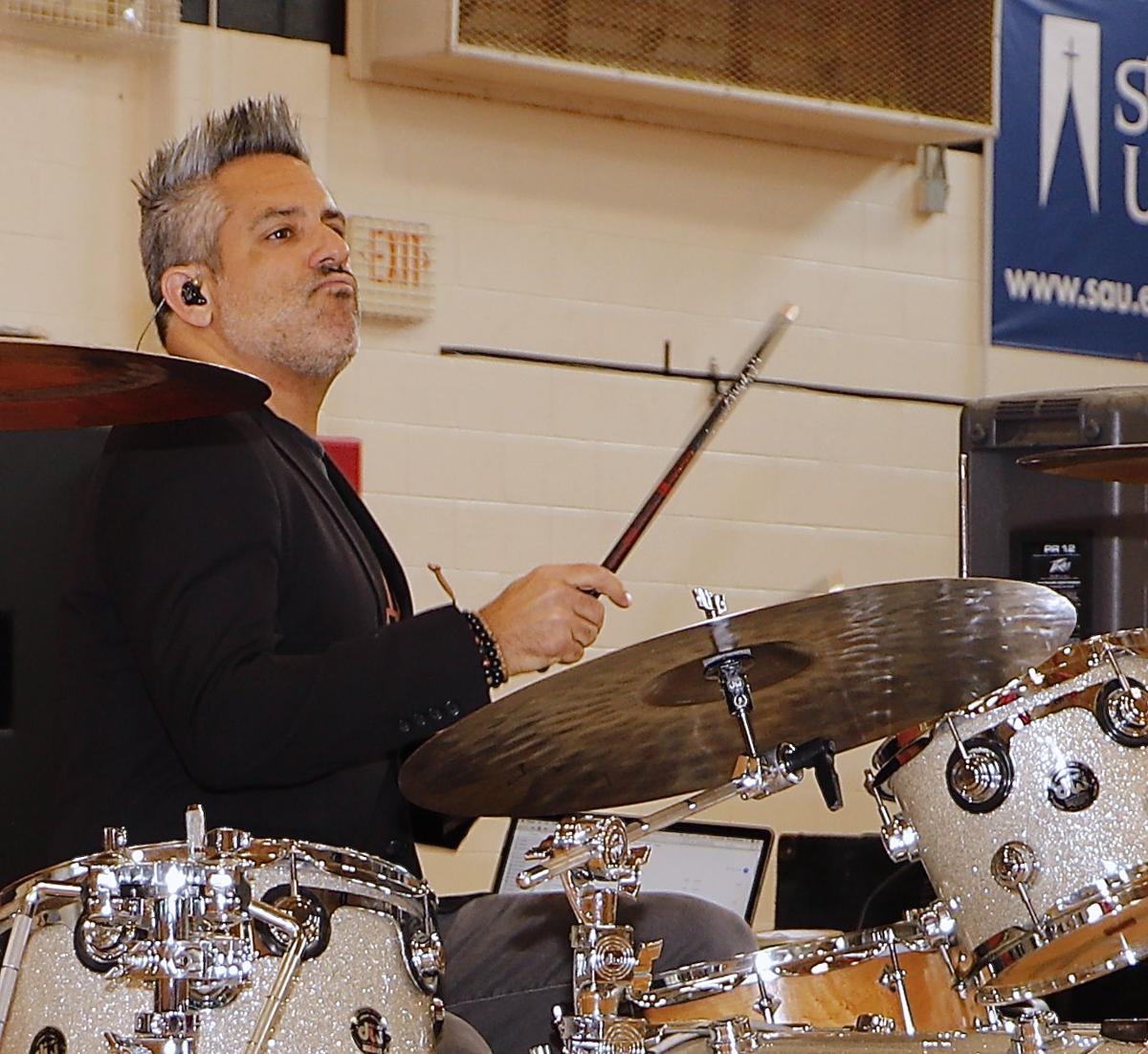 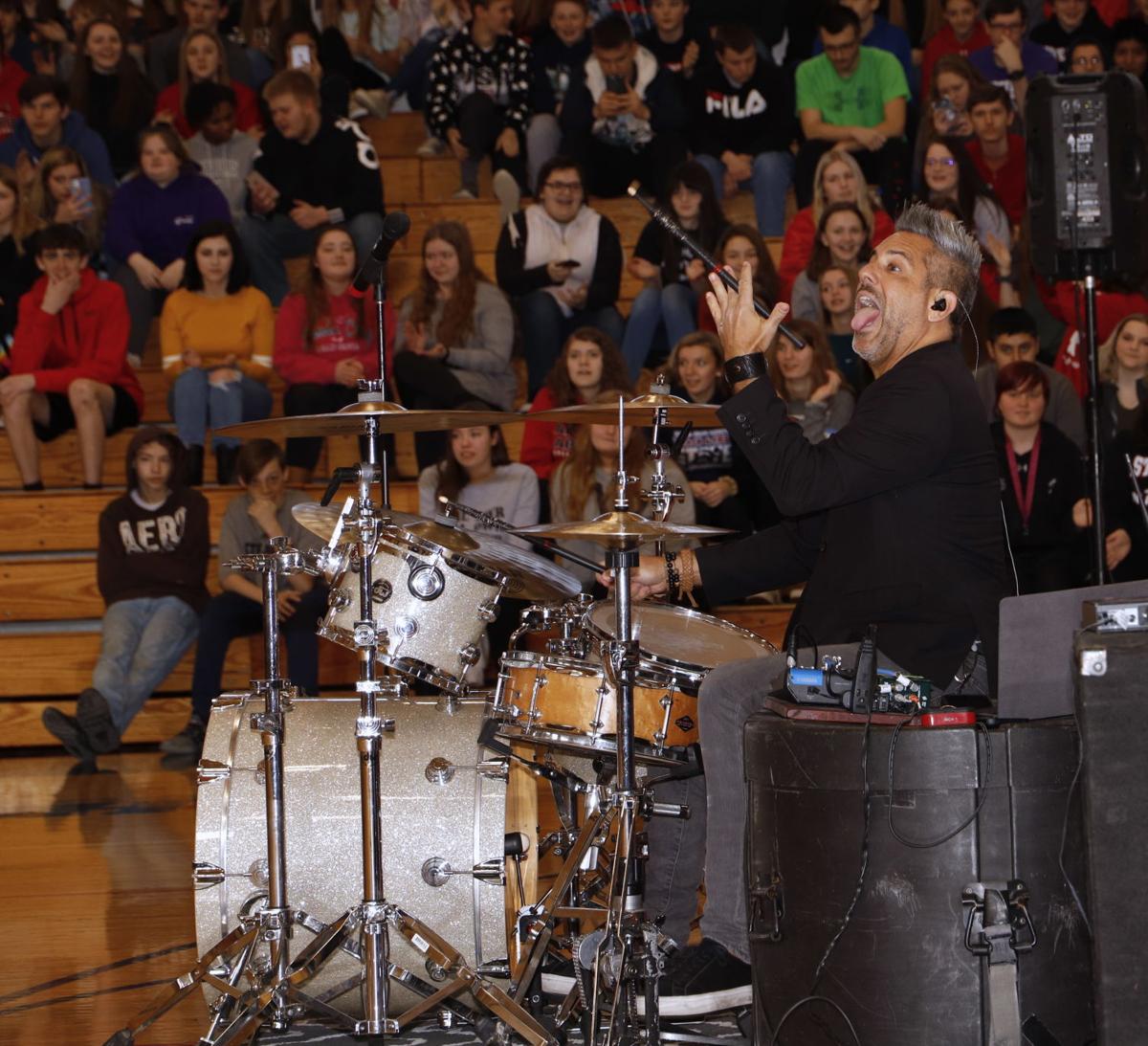 Rich Redmond gives his all during a performance for Fulton High School students. On tour with country music star Jason Aldean, Redmond uses his free time to give motivational speeches. 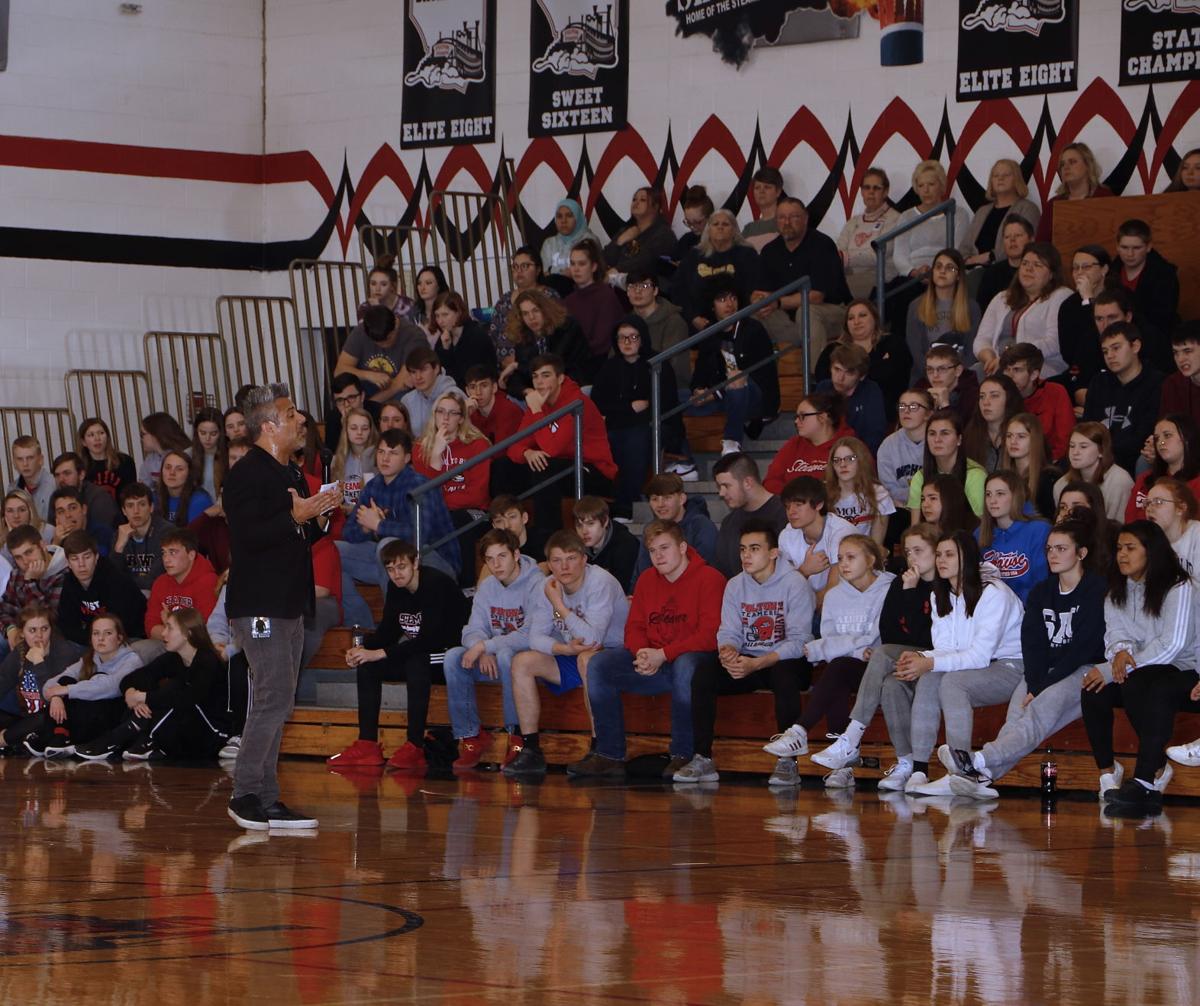 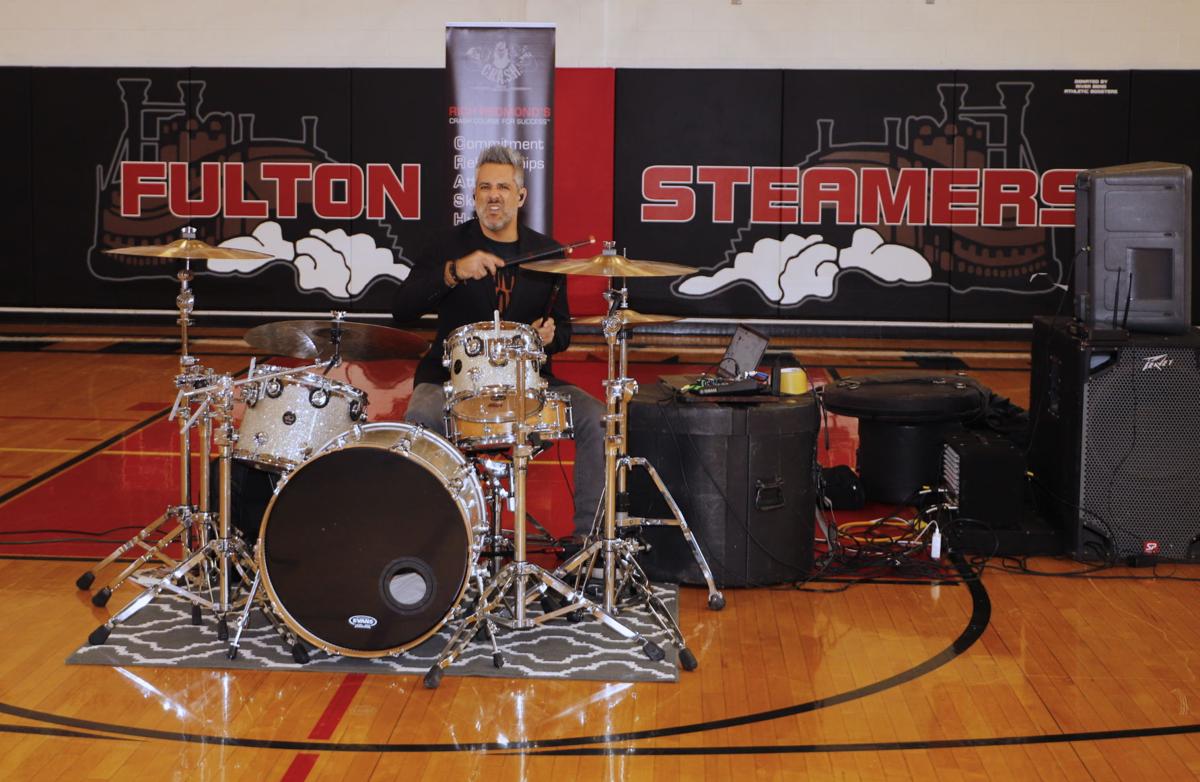 Rich Redmond gives his all during a performance for Fulton High School students. On tour with country music star Jason Aldean, Redmond uses his free time to give motivational speeches.

FULTON, Ill. — When Rich Redmond was only 8 years old, his father asked him if he’d like to take drum lessons.

“I was kind of hitting everything in sight,” said the Milford, Connecticut native.

Then again, maybe the father wanted to live through the son. “I think secretly he wanted to be a drummer,” Redmond said.

But that worked for Redmond.

Now on tour with country music star Jason Aldean, Redmond made a stop at Fulton High School before Thursday’s show in Moline, Illinois to give students a “C.R.A.S.H. Course for Success” through commitment, relationships, attitude, skill and hunger.

“I’ve been playing drums since 1976,” Redmond said as he prepared for his motivational talk in the Fulton High School gymnasium. “I’m behind a set of drums every day.”

Redmond tailors his “C.R.A.S.H. Course” speech, based on a book by the same name, for each audience, from kindergarten students to corporate teams. Redmond tells whomever will listen to find something they love to do every day.

“Life is very long if you’re doing something you hate,” Redmond said.

Music is Redmond’s life. He tours, records and teaches. He’s recorded 27 No. 1 hits, has performed or recorded with Ludacris, Kelly Clarkson, Bryan Adams and Bob Seger and played in venues such as Madison Square Garden, The Hollywood Bowl and Fenway Park.

Music is also Redmond’s method of reaching an audience. “People love the drums,” he said. “Drums and music break the ice.”

Redmond starts his presentation with an exhibition of his craft, playing live with a soundtrack. “I have a very affordable band — my iPod,” he said after performing a sound check.

Redmond gave Fulton High School students the same effort he gives ticket holders — all the faces, all the stick twirls, all the attitude. And the kids loved it.

Then Redmond took the mic, introduced himself, gave the front row high fives and preached to the crowd with the same energy and intensity that he gave to his opening performance.

Redmond told the story of beginning drum lessons at the age of 8 at the suggestion of his father. “I fell in love with my instrument,” Redmond said. He played with his KISS albums and wanted to be a rock star.

Redmond planned to make it big by the time he was 21, he said, but the journey took an additional 20 years.

“Twenty years of doors being slammed in my face,” Redmond said Thursday.

“Like many musicians, I survived hard times by waiting tables, doing construction work and substitute teaching,” Redmond says in his book. “I hit roadblocks, doors were slammed in my face and I heard the word ‘no’ a million times.

“I fell in love with rejection. Every ‘no’ felt like a step closer to my destination. I could have packed my bags and quit, but I didn’t because I had two things: my dream, and my commitment to see it through.”

Each person has to find his purpose in life, Redmond told the Fulton students. “We can achieve what we can conceive, but we have to believe.”

Redmond likes his days free when he tours. He visits with local media or gives a C.R.A.S.H. talk for a school or business.

“Nobody gets to the top by themselves,” says Redmond in chapter two of his book. Success requires relationships.

It was a relationship that took Redmond to Fulton.

Albany Police Chief Wyatt Heyvaert is a musician himself. He knows people who know Redmond, he said Thursday.

Heyvaert has been watching for several years for an opportunity to have Redmond speak in Fulton. Aldean performed in Moline in 2016. “We tried to make it happen then,” Heyvaert said.

A Fulton High School graduate himself, Heyvaert kept an eye on Aldean’s schedule, spoke with Superintendent Darryl Hogue about scheduling the drummer, and brought Redmond and C.R.A.S.H. to Fulton on Thursday.

Redmond has a master’s degree in music education, was named Country Drummer of the Year in Modern Drummer Magazine in 2015-2018 and is an adjunct faculty member at Musician’s Institute in Hollywood and The Drummer’s Collective in New York City.

A fan of acronyms, Redmond is already working on his next book: P.O.W.E.R.