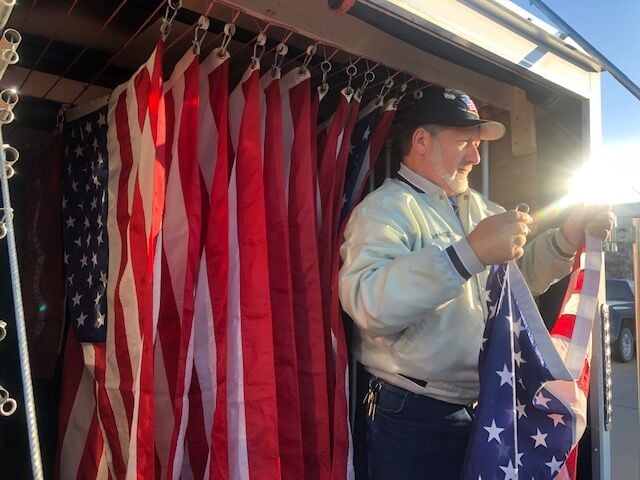 Gregg Obren sets up the American Legion June Van Meter Post 190 trailer at the Wild Rose Casino in Clinton at the conclusion of the Clinton County Development Association meeting Oct. 19. Obren is an ex officio member of the CCDA board, and was appointed by the Clinton City Council to serve on the CCDA as a nonvoting member under a law the Iowa Legislature approved in 2019. 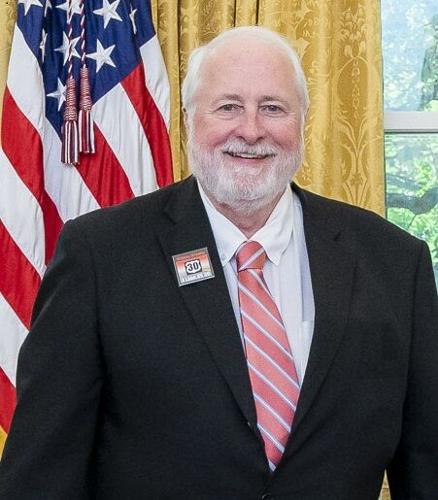 CLINTON — As they prepare for their annual reorganization, Clinton County Development Association board members are bringing on three new members, deciding who will serve in leadership positions, and weighing options on how to get information about DeWitt and other cities’ information to the board.

The CCDA board Wednesday learned that Eric Gettes, Jenny Green and former CCDA board member Matt Stammeyer have been selected and agreed to join the CCDA board pending Iowa Division of Criminal Investigation background checks. The three, whose nominations will be voted upon at the December CCDA board meeting, will be taking the seats occupied by retiring CCDA board members Jerome Burken, Ed Hupfer and Kim Clausen.

In her Nominating Committee presentation at Wednesday’s meeting, CCDA board member Rita Hart also presented a slate of nominees for board leadership positions. The committee’s recommendations for the executive board include David Sivright for president, Joel Dieckmann for vice president, Lester Shields as secretary and Dawn Holesinger for treasurer. Dieckmann and Holesinger also agreed to renew their expiring terms and continue to serve.

Hart also said the committee would like to add an ex officio member representing DeWitt to the 11-member CCDA board.

Currently, the board has an ex officio member representing Clinton and another representing Clinton County under requirements set by the Iowa Legislature in 2019. While that rule is no longer in effect, it stated a city council member from the city in which the casino is located, and a member of the local Supervisors from that county, must serve on the board as nonvoting ex officio members. The city council and Supervisors chose and appointed their own member to the local gaming board under the legislation, said Shields, who is president of the CCDA Board.

“There is no DeWitt ex officio member because there is no casino there,” Shields said. He said while the Iowa Racing and Gaming Commission has not prohibited adding an ex officio board member to a local gaming board, it also has not said a local board can take that action, Sivright said.

“I think we have to ask the IRGC for permission to do that,” Sivright said.

Gregg Obren is the city of Clinton’s ex officio member; Tom Determann, a Clinton County Supervisor, is the county ex officio representative on the board. Each month the ex officio members provide updates on actions their governing bodies have taken.

Hart said her committee wants to add an ex officio member from DeWitt so projects from that area are shared with the board monthly as an agenda item. In some cases, that could provide more clarity to CCDA board members who are scoring grant applications for the spring and fall grant rounds or as they react to grants as they come up, Dieckmann said.

Some board members said officials from cities throughout the county can attend CCDA board meetings to provide information as part of the public comment portion of the agenda.

But Hart likened that to having an office or having an office with your nameplate on it. She said having a DeWitt ex officio member listed on the agenda would provide validity and “the notion of what is happening is part of our routine.”

“I think it would be definitely a sign from the board that we care about the DeWitt area and the surrounding area,” she said. “That this is not about Clinton and only Clinton.”

Other CCDA board members agreed with Hart, saying they also would like more county project information, specifically what is happening in other communities outside of Clinton projects, to be presented by the county representative.

While Determann holds that position now, he will be leaving the Board of Supervisors as he joins the Iowa House of Representatives in January. Determann, who was not present at Wednesday’s CCDA meeting, was elected Nov. 8 to represent District 69 in the Iowa House.

CCDA board members said whichever Supervisor will be following Determann onto the CCDA board should be mentored into obtaining county project information to provide more knowledge to the board.

Wolf said letters also should be sent to city officials twice a year reminding them to attend board meetings to share information about upcoming projects. Burken said the public also can contact CCDA board members to let them know about projects in the area.

Shields said a call will be made to the IRGC to see if the CCDA board can add an ex officio member. Nominations for the three seats and the executive board will be voted upon at the CCDA’s December meeting.

Shields also stressed there have been no allegations of unfairness in how the CCDA has distributed grant funds.

In other action, the board approved a 6-month grant extension to the Clinton County Sheriff’s Office.