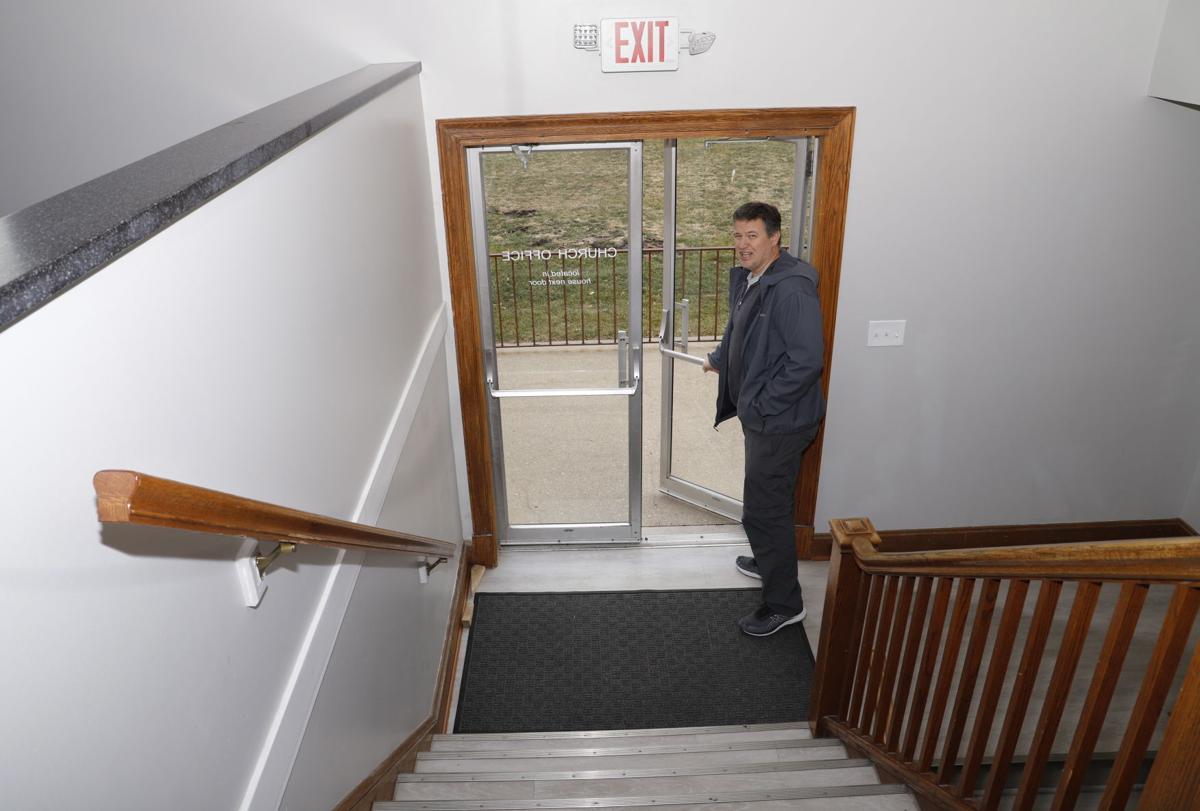 Pastor Scott Stephan of Second Reformed Church in Fulton, Ill., shows the door that all church traffic will eventually be filtered through. The church intends to keep all other doors locked for security after new doors with crash bars are installed on the front. 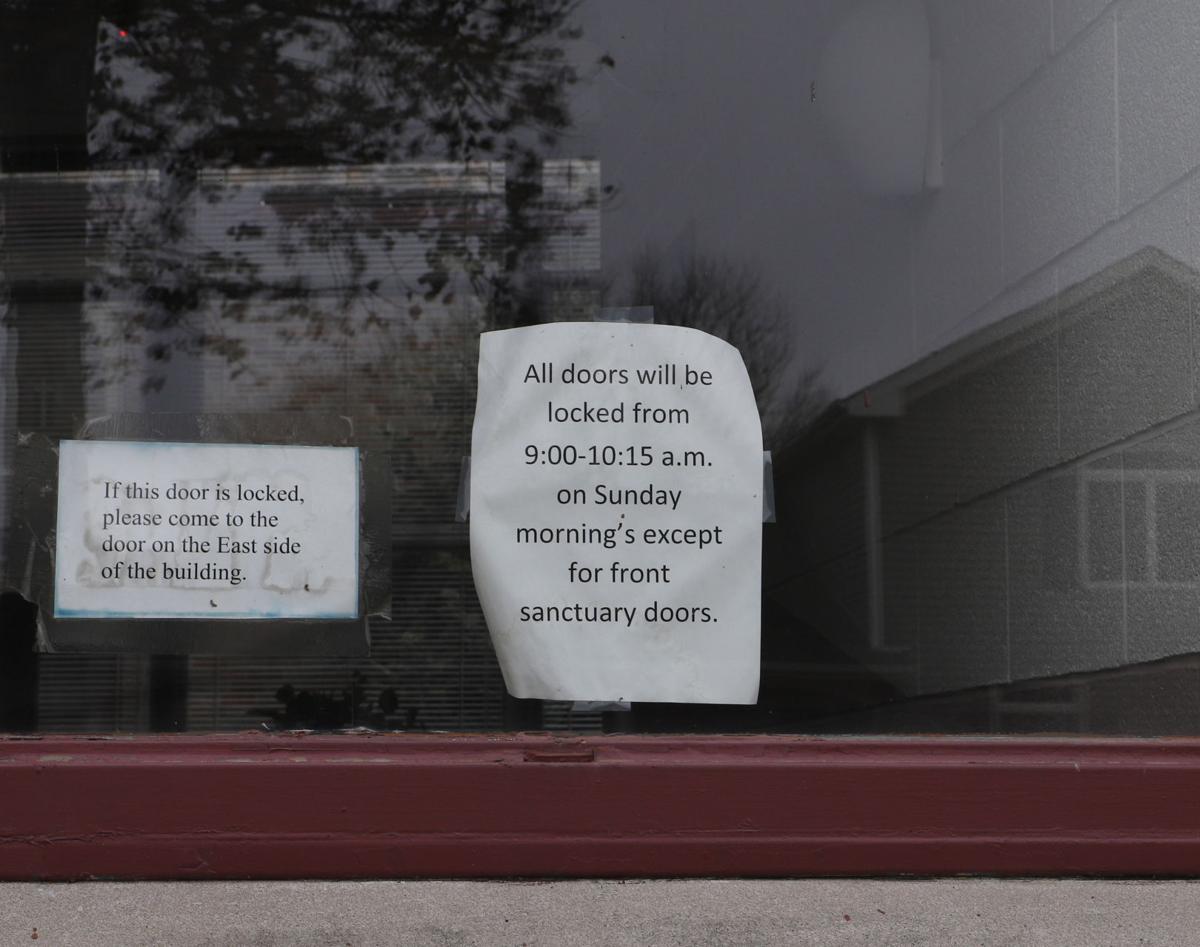 Pastor Scott Stephan of Second Reformed Church in Fulton, Ill., shows the door that all church traffic will eventually be filtered through. The church intends to keep all other doors locked for security after new doors with crash bars are installed on the front.

CLINTON — A man shot and killed two people during a church service in White Settlement, Texas, in December, but many local churches had increased security long before that event occurred.

Not all security measures were created to deal with shootings, Klemmedson said. Churches have increased security for years because of vandalism and theft. “There are various reasons.”

First Presbyterian’s maintenance supervisor is also its information technology guy, Klemmedson said. He installed security cameras and monitors them from his phone, even at odd hours.

“When services start, we lock all the doors we don’t have eyes on,” Klemmedson said. The church locks all doors during office hours as well. Offices have monitors and buzzers so church personnel can decide whether or not to let a visitor inside.

The enhanced security “feels more like a resurgence to me,” said Klemmedson. She remembers a church she attended in the 1980s that had an elaborate security system.

First Baptist Church in Clinton has had heightened security for the last eight or nine years, said Pastor Ron Lott. “We have a video system, both interior and exterior. We have added [an automated external defibrillator], given training, both in that, and have held more than a couple certifications for CPR.”

A police officer who is a member of the church taught a self-defense class for women, and the county emergency management director and fire marshal met with the church to talk about evacuation in case of fire or tornadoes or other emergencies.

“We do have people who are charged on Sunday with just sort of watching the doors,” Lott said. “It’s a shame to have to think about that stuff, but it’s the world in which we live.”

Diana Mussmann, president of the Chancy Lutheran Church council, said her church is having discussions about how to make the building safer.

The Chancy congregation asked Camanche Police Chief Colin Reid, who is a member of the Chancy church, to speak with the congregation sometime this month about “what we can do in the church itself to protect ourselves, and also in our home,” Mussmann said.

Mussmann isn’t sure what the congregation will want to do after hearing from Reid. “We will be following up though.”

Second Reformed Church in Fulton, Illinois, has been talking about increased security for about a year, said Pastor Scott Stephan.

Fulton police officer Jeremy Lietzen spoke with the church about a month ago, said Stephan. “We had an evening where several churches came together. [Lietzen] gave about an hour-and-a-half presentation about what we need to be thinking about with security.”

The church is installing new front doors with crash bars so the doors can remain locked. Crash bars allow the doors to open in event of an emergency even when they are locked, meeting fire codes.

“I think there are, like, six entrances in our church,” Stephan said. “In the future, everyone will be funneled through one entrance.”

Father Ken Kuntz at Jesus Christ, Prince of Peace Catholic Church, said the church is constantly upgrading security, but he’s not going to disclose how. His congregation is aware of increased church violence nationally, “but I’ve never talked to anyone who said, ‘I’m not going church because of it.’

“And we certainly pray that nothing like that will happen,” Kuntz said. “We have got to take this very seriously.”

“I was a law enforcement officer for 35 years,” said Jim Rhoades, “and our church, Zion, really didn’t have a security plan. I worked with the pastor and council, and several years ago we started a security ... program there.”

Since then other churches have contacted Rhoades for recommendations. “I have had some training in church security,” said Rhoades. He has also written emergency response plans for schools and banks.

The best plan is balanced, Rhoades said. “Churches need to be open places for people to worship,” but they also have to provide safety for people there.

The physical security aspect includes controlling access points by locking all the doors except those that are used to enter or exit the building, and monitoring those entrances when people are arriving or departing.

The second level of security is to add cameras in entrances, hallways and offices, Rhoades said. These measures are important for businesses and schools as well as for churches.

Preparation is the most important thing, Rhoades said. Churches should create procedures, train staff and ushers, create security teams and learn how to respond if an incident does occur.

Even though horrific shooting incidents are occurring, they are a low frequency event, Rhoades said. They get a lot of airtime, but other assaults occur more frequently, and churches need to be prepared for them as well.

“People get stuck on the shooting aspect,” Rhoades said. “You still have to prepare and be ready for more frequent things — severe weather, theft, burglary, fire, other incidents that require a response.

“Those are the things you’re going to deal with on a daily basis or a monthly basis,” Rhoades said. “The biggest thing is for people to heighten their awareness. Be aware of their surroundings. Know what to look for in behavior that lead up to these things.”