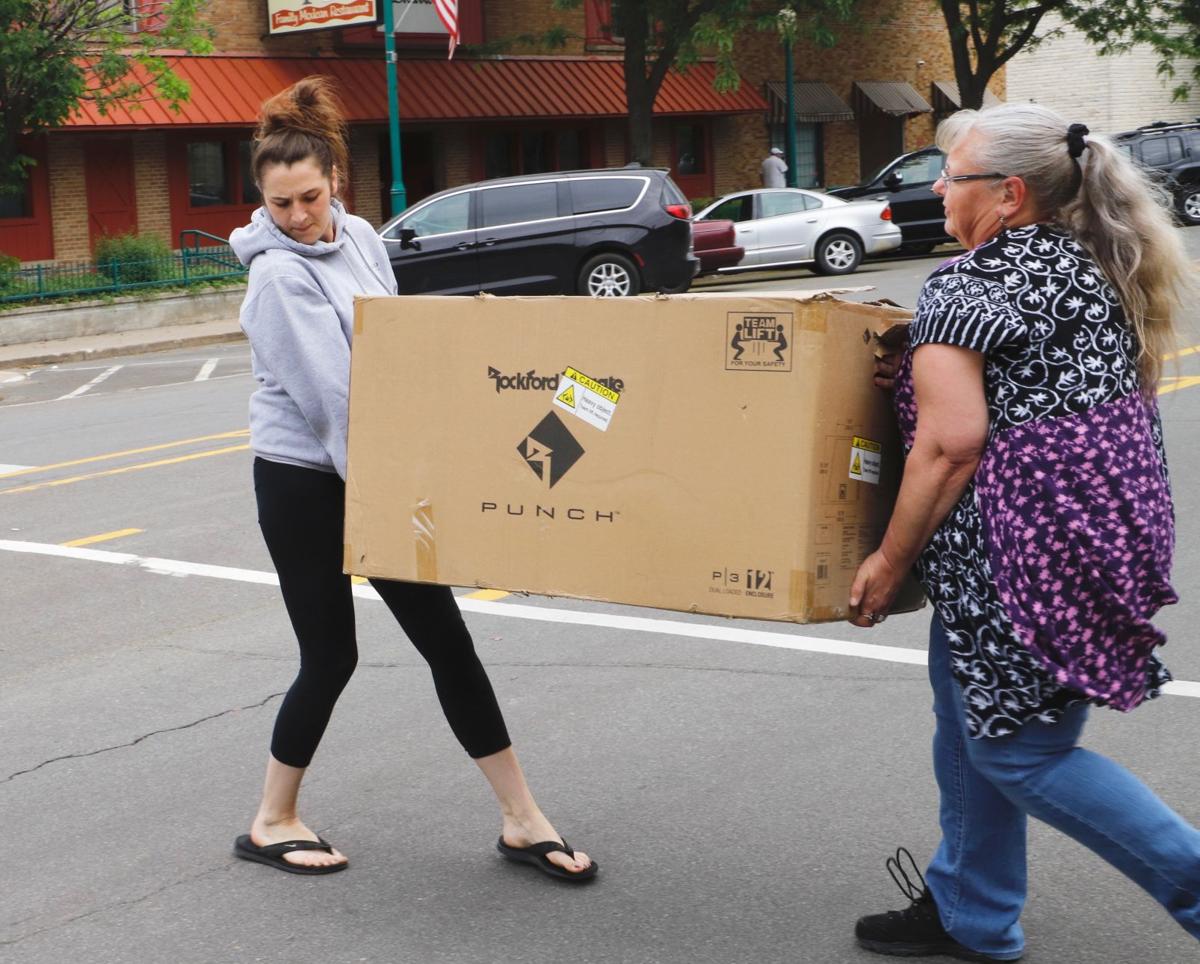 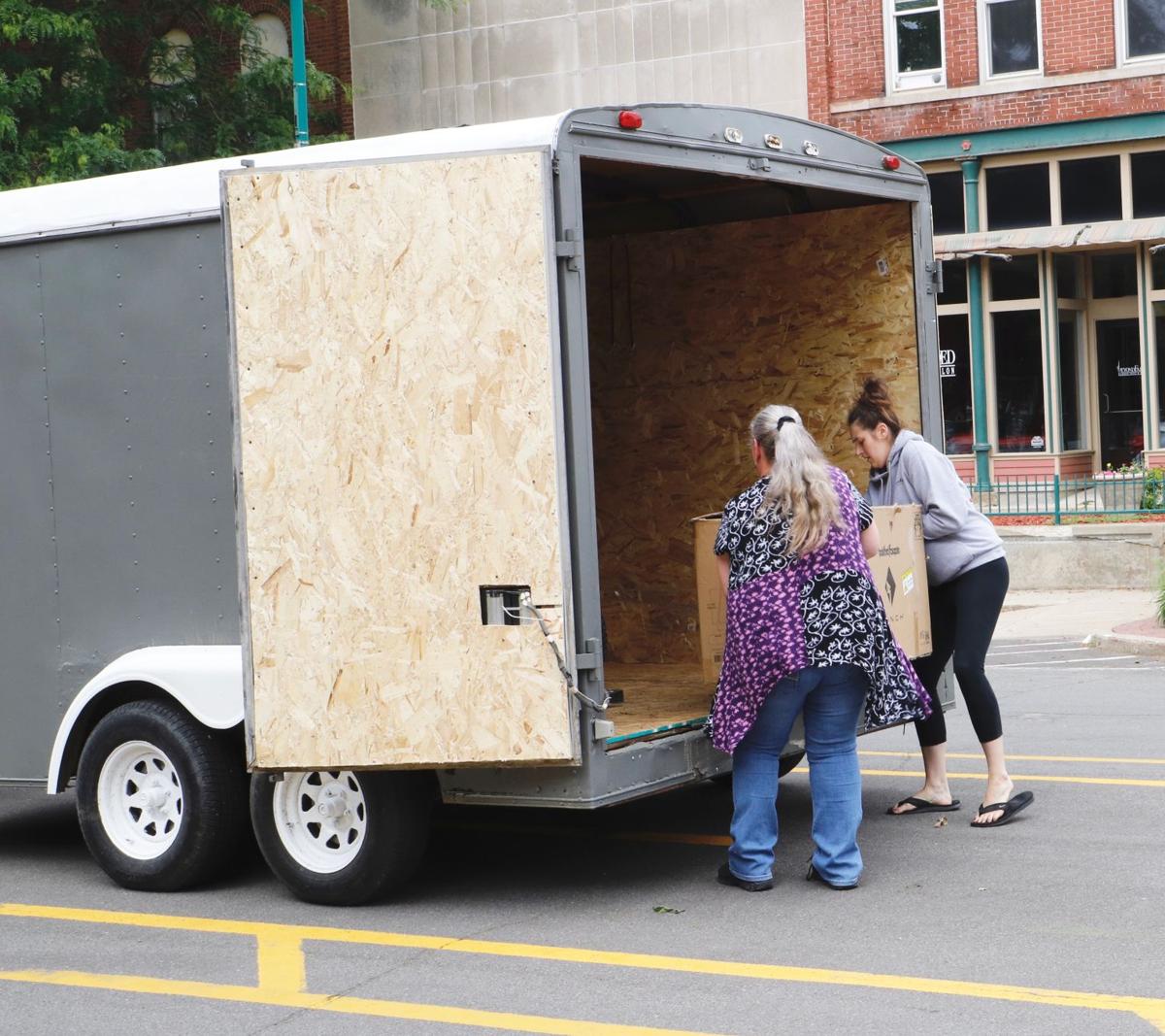 Kerri Baker and Brittney Lundin load a trailer with merchandise from Lundin’s Auto Spa Express Monday. After violence erupted Sunday night in Davenport, 42 miles to the south, Lundin felt the need to protect her business from the possibility of vandalism and looting during a protest scheduled for Tuesday in Clinton. Winona Whitaker/Clinton Herald

Kerri Baker and Brittney Lundin load a trailer with merchandise from Lundin’s Auto Spa Express Monday. After violence erupted Sunday night in Davenport, 42 miles to the south, Lundin felt the need to protect her business from the possibility of vandalism and looting during a protest scheduled for Tuesday in Clinton. Winona Whitaker/Clinton Herald

CLINTON — Clinton’s mayor announced a citywide curfew beginning Monday night, saying the city is preparing for what it hopes will be a peaceful protest but stands ready if anyone gets out of line.

That protest, organized through a Facebook page titled, Clinton, IA Police Brutality Protest and protesting the May 25 death of George Floyd while in Minneapolis police custody, is expected to begin at 5 p.m. Tuesday. The protest will begin with a march from the Riverview Bandshell south along Riverview Drive, west onto Sixth Avenue South, then north on Second Street and east on Sixth Avenue North, ending at the bandshell with a vigil and speakers.

Clinton Mayor Scott Maddasion said Monday afternoon that the planned protest, whose organizers have been in contact with city officials and are stressing will be peaceful, is the only one that city officials are aware of in Clinton.

Maddasion said the city supports the protesters’ right to free speech, their First Amendment right and the right to be heard.

“I do believe the people of Clinton are smart and rational,” he said.

But as a precaution, he declared a citywide curfew, effective immediately, that will run from 9 p.m. to 5 a.m. every day until further notice. He said “only those going to and from their place of employment or for a matter deemed to be critical can be out during the curfew timeframe.”

He said the emergency directives are needed because a state of emergency or public danger exists within the city due to the threat of the spread of violent riots and protests. In it, he cites Floyd’s death; riots that have led to violence, death and property damage; and Sunday’s riots in the Quad-Cities that resulted in two deaths, two injuries, and local law enforcement being called to assist.

Social media posts throughout the day Monday indicated that business owners were taking no chances, with several announcing on Facebook that they would be closed Monday afternoon and Tuesday.

The possibility of vandalism and looting during protests led local business owner Brittney Lundin to remove inventory from her Fifth Avenue South business Monday. Lundin, owner of Lundin’s Auto Spa Express, was loading a trailer with merchandise throughout the morning. Though the local protest is planned for Tuesday, Lundin had heard that something might happen at 1 p.m. Monday, and she prepared for the earlier date. She and employees cleared out what inventory they could, and Lundin sent employees home.

Throughout the afternoon, other Clinton businesses were making announcements of their closures as well, citing the need to stay safe.

Maddasion said he supported businesses closing for safety’s sake, and said city officials had been preparing for the protest.

“We expect no issues with the planned protest,” Maddasion said, adding that police officers, public service officers and emergency medical service workers will be on hand and plans have been made with nearby law enforcement agencies. “I can tell you the Clinton Police Department is prepared.”

But if anyone becomes violent, Maddasion said, that will fall outside of the peaceful protest and into criminal activity that would lead to arrest and prosecution.

Lundin hopes Tuesday’s protest in Clinton doesn’t turn violent, but “with seeing how everything happened in Davenport,” she felt the need to take precautions. “We’re just trying to be as proactive as possible.”

Lundin understands that people are trying to be heard, “and I totally agree with it,” she said, but some people are using Floyd’s death and the subsequent protests as an excuse to vandalize and loot.

Lundin’s business is close to the Clinton police department, and her large glass windows are an invitation to vandalism, she said. Moving inventory leaves less for looters to steal.

The thought that the business she has put her blood, sweat and tears into can be wrecked by protesters is heartbreaking, Lundin said. She’ll hope for the best, she said, and “pray that nothing happens.”