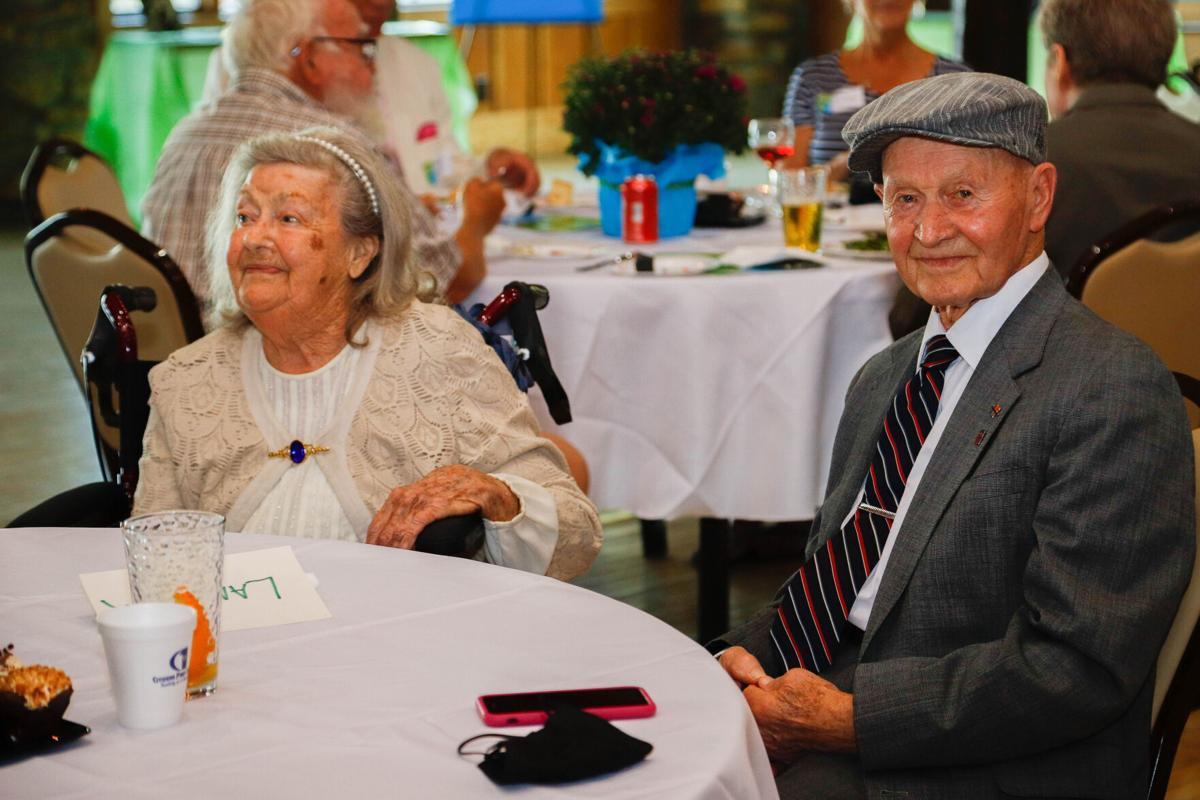 Clinton County Walk of Fame inductee Henry Langrehr sits with his wife, Arlene, at the induction ceremony Saturday at Eagle Point Lodge. Langrehr praised his wife for her hard work to provide for the troops fighting in Europe during World War II. 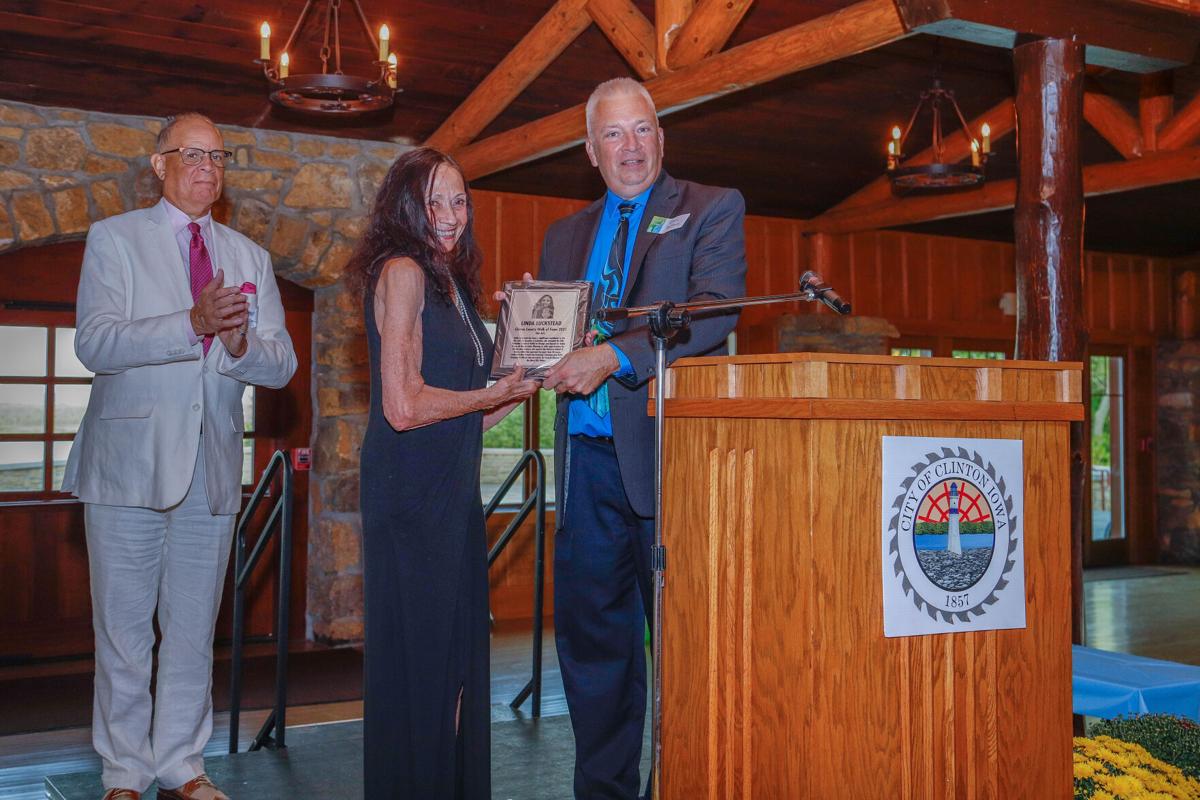 Francis Boggus, left, applauds as Gary DeLacy gives Linda Luckstead her Walk of Fame plaque Sunday at Eagle Point Lodge in Clinton. Luckstead was recognized for her contribution to the performing arts. 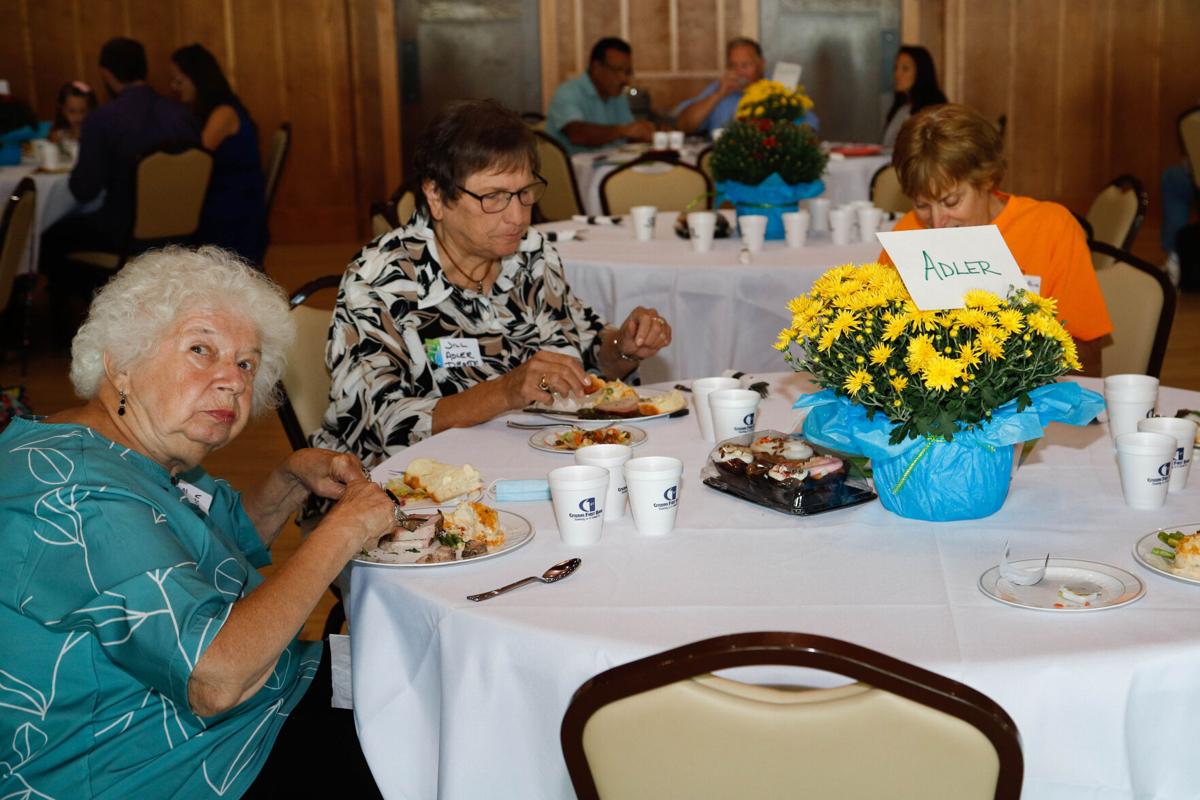 Jeanette Petersen, Jill Adler Droste and Pat Collins dine at the Felix Adler table of the Clinton County Walk of Fame induction dinner Sunday. Collins and Droste accepted the award for their great-uncle. 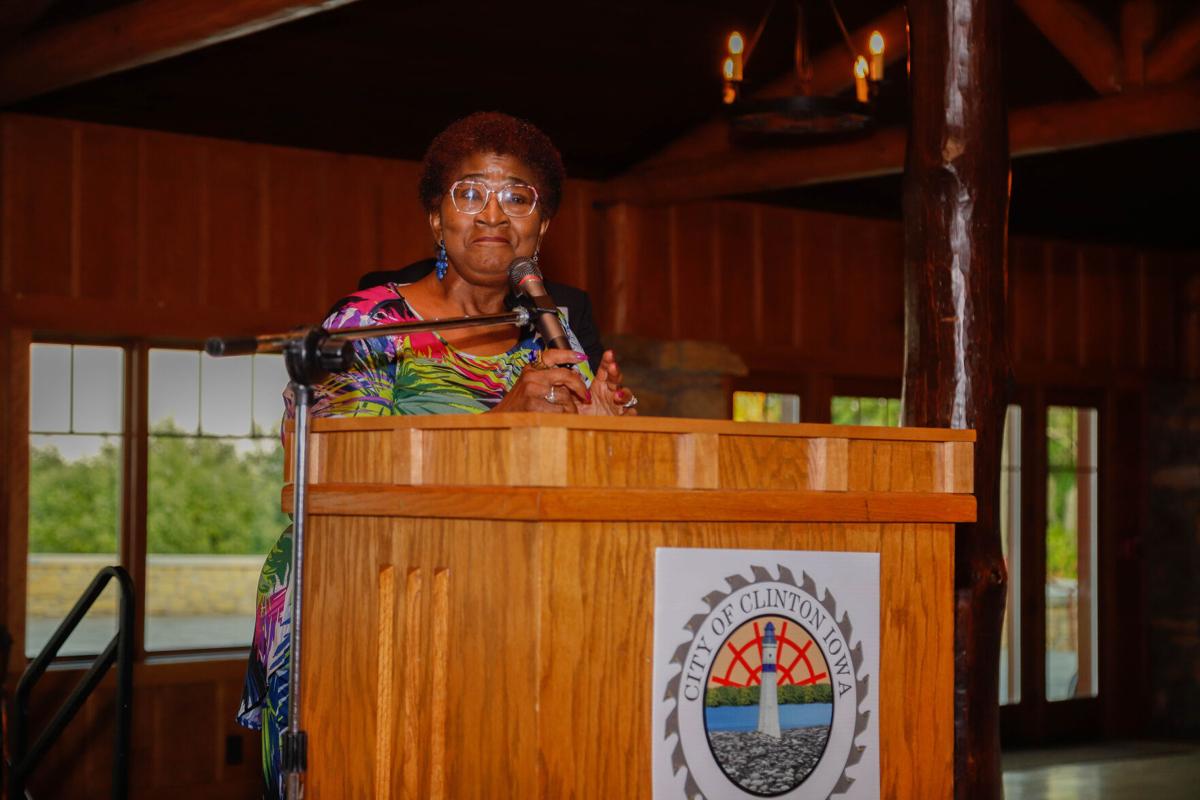 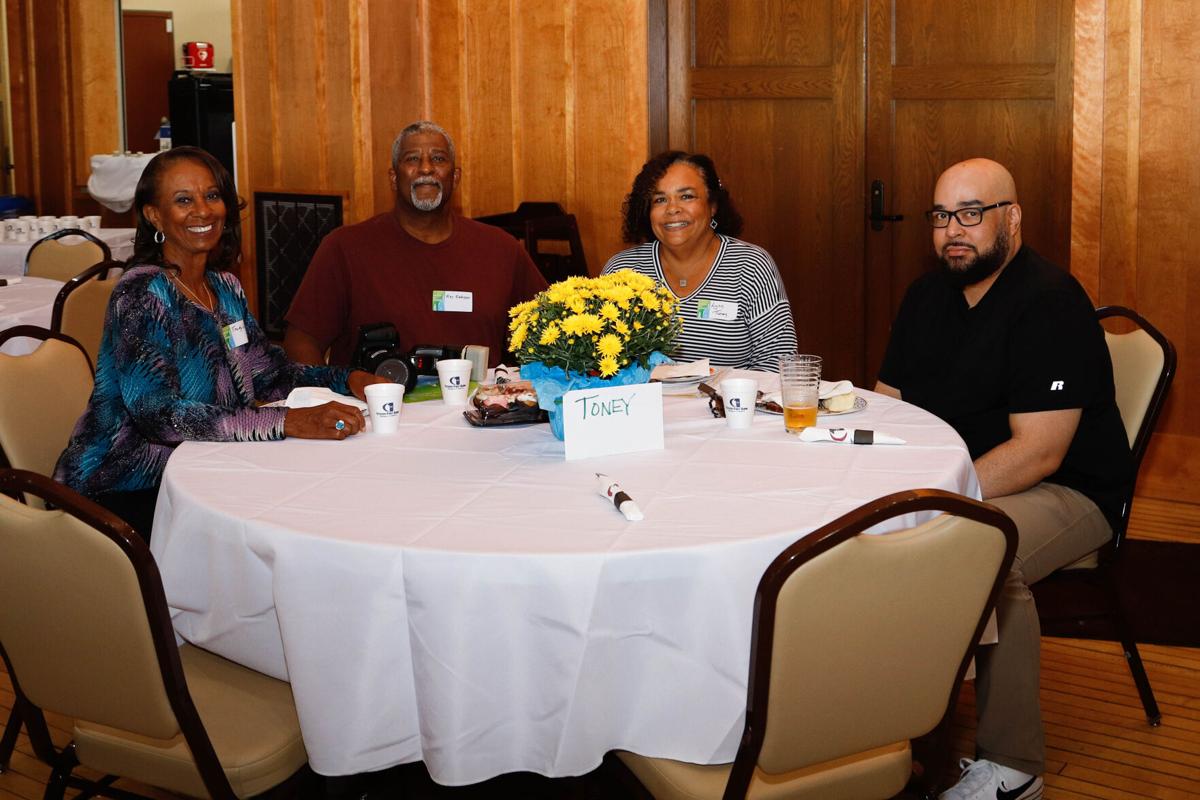 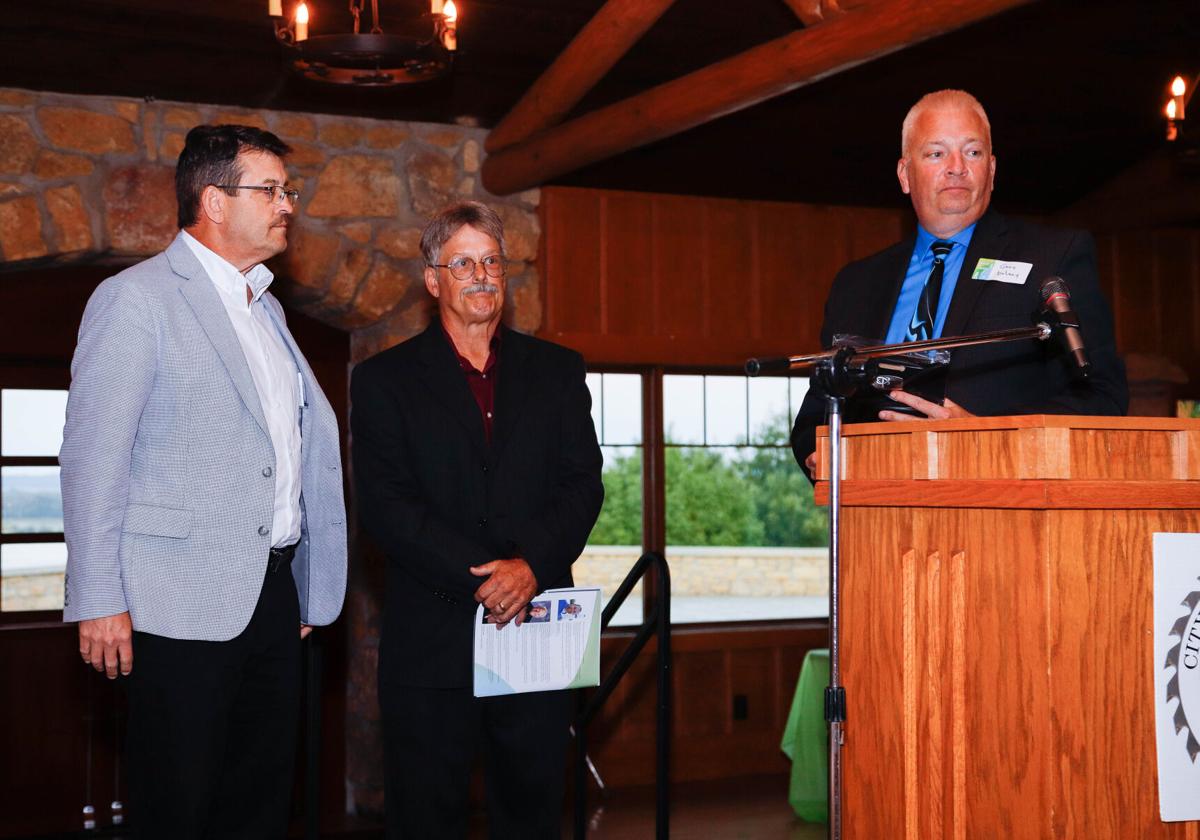 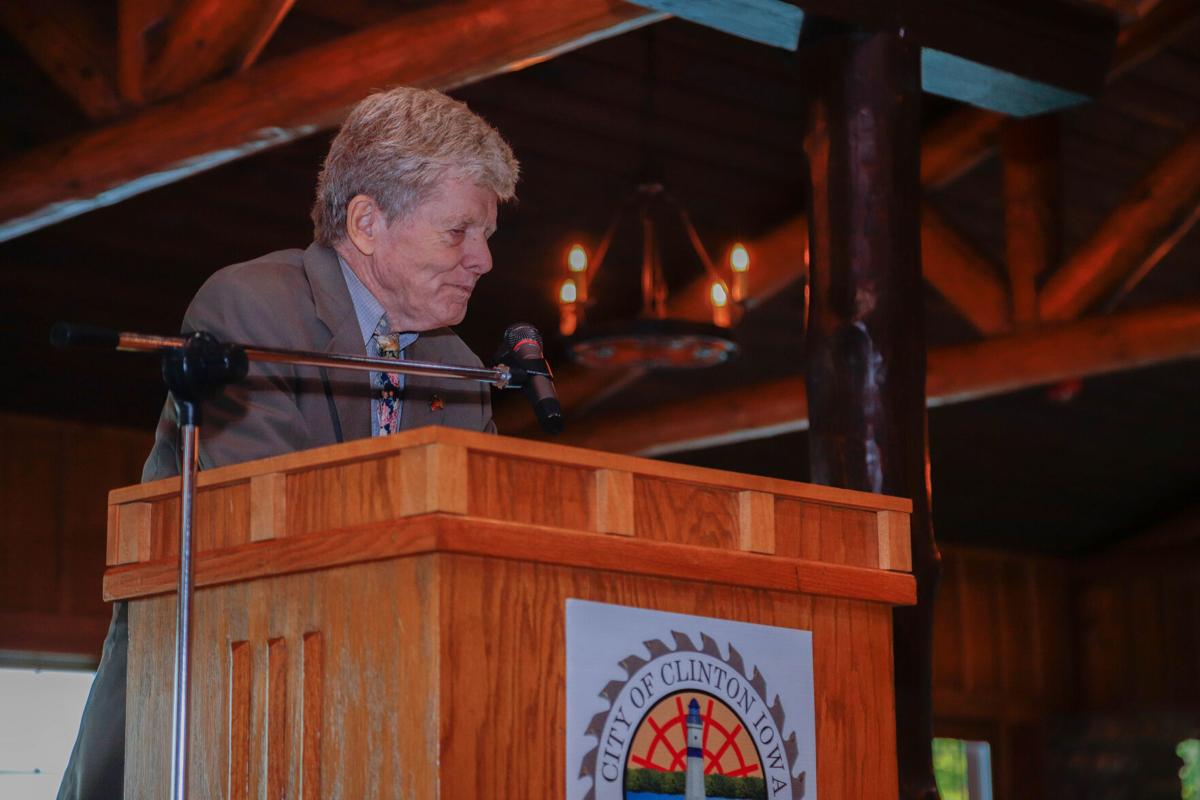 Local historian Mike Kearney speaks on behalf of the Lamb and Gates families during the Clinton County Walk of Fame induction Sunday at Eagle Point Lodge. Kearney nominated Artemus Lamb Gates for the honor but could find no descendants to represent the family. Winona Whitaker/Clinton Herald

Clinton County Walk of Fame inductee Henry Langrehr sits with his wife, Arlene, at the induction ceremony Saturday at Eagle Point Lodge. Langrehr praised his wife for her hard work to provide for the troops fighting in Europe during World War II.

Francis Boggus, left, applauds as Gary DeLacy gives Linda Luckstead her Walk of Fame plaque Sunday at Eagle Point Lodge in Clinton. Luckstead was recognized for her contribution to the performing arts.

Jeanette Petersen, Jill Adler Droste and Pat Collins dine at the Felix Adler table of the Clinton County Walk of Fame induction dinner Sunday. Collins and Droste accepted the award for their great-uncle.

Local historian Mike Kearney speaks on behalf of the Lamb and Gates families during the Clinton County Walk of Fame induction Sunday at Eagle Point Lodge. Kearney nominated Artemus Lamb Gates for the honor but could find no descendants to represent the family. Winona Whitaker/Clinton Herald

CLINTON — Henry Langrehr was inducted into the Clinton County Walk of Fame for his military service during World War II, but in his address Sunday evening, the D-Day parachutist and prisoner of war praised the woman he left behind.

“I have been married to my sweetheart, Arlene, for 76 years,” said Langrehr. While Langrehr was fighting a war in Europe, Arlene, and women like her, were making equipment needed for the conflict while enduring rationing at home.

While Langrehr was overseas, Arlene worked 12 hours a day, seven days a week making machine gun stands. “We forget a lot about the people back home ... that made what the war effort required,” Langrehr said. She was one of many Rosie the Riveters.

While Langrehr was flying over the English Channel to France, he saw so many ships that a person could have walked to France on ships, he said. Above him were bombers and fighters, and Langrehr thought, how could we ever lose the war when they gave us so much?

“They worked hard to make all that material,” Langrehr said.

“We take things for granted,” Langrehr said. Everything was rationed during the war. “They did without so much.

“She’s still my sweetheart,” said Langrehr of his wife. The couple have four children, several grandchildren and a new great-grandchild. “We, as a family, are growing, and we are truly, truly blessed.”

Langrehr operated a construction company in Clinton for 44 years, he said. “Clinton has been good to us.”

Langrehr said he considered himself blessed to be among people who clearly care about their hometown. “It’s heartwarming to see a group of people who came just to hear us talk.

“I am humbled and honored,” Langrehr said.

Linda Luckstead said she feels lucky to be a Clintonian. Honored in the Walk of Fame for her contribution to the arts, Luckstead has instructed dancers in Clinton since 1960.

“Believe me friends. We do have the arts,” Luckstead said.

Luckstead attended the Ellis-duBoulay School of Ballet in Chicago and danced with Ballet Russe de Monte Carlo before returning to Clinton to open a dance studio.

Luckstead has taught dance in Florida and California. “Nothing does to me what Clinton, Iowa does,” Luckstead said. “You people are so kind and so generous.”

Luckstead’s first studio was in the basement of her father’s house on Second Street, she said. Her dad painted the basement floor red, and the first class ended up with red on their slippers because the paint wasn’t quite dry. She currently teaches on Fifth Avenue South.

Luckstead has produced five professional male dancers, several female dancers and several dance instructors, she said. And they are happy to come to Clinton because they know the people who are waiting for them here, Luckstead said.

“They love to come back.”

Adler liked having animals in his act, Collins said. His favorite were piglets. He would rub the piglet’s snout, and if the pig liked it, Adler knew the pig could be trained, Collins said.

After Adler married Amelia, he named all the pigs Amelia, Collins said.

Adler auditioned for Charles Ringling and was hired for his circus. He soon worked his way up to head clown, said Collins. From 1919 through 1946, he never missed a performance, and he trained all of the Ringling Brothers clowns.

“But he always enjoyed returning back to Clinton.”

Adler also performed at children’s hospitals, and only once did he have trouble making a child laugh. That child, who had polio and knew he would never play baseball again, was a tough audience, but Adler finally succeeded in making the boy laugh.

Droste shared Adler’s favorite poem, “A Smile,” which says in part, “It costs nothing but creates much. It enriches those who receive it, without improverishing those who give it. It happens in a flash and the memory sometimes lasts forever. It creates happiness in the home, fosters Good Will in business, and is the countersign of friends.

“And if, you meet someone who is too weary to give you a smile – leave one of yours. For no one needs a smile quite so much as he who has none left to give.”

Duke Slater, a National Football League Hall of Famer well-known to Clintonians, was remembered Sunday by his cousin Dina White. “You know so much about Duke,” White told her audience. “We’re all one, big happy family.”

Slater was born in Normal, Illinois in 1898. His family moved to Clinton when he was 13, and he graduated from Clinton High School in 1916.

He played football for the Iowa Hawkeyes, was named first-team all-American and was inducted into the inaugural class of the College Football Hall of Fame in 1951.

Slater became an attorney and later a judge in Chicago. He was inducted into the National Football Hall of Fame in 2020, and in 2021 the University of Iowa named the field at Kinnick Stadium after Slater.

White remembered that Slater’s father, a Methodist minister, didn’t want the boy playing football. He would buy his son either shoes or a helmet, but not both, so Slater played without headgear.

Lynn Toney spoke about her grandfather, Charles Toney, in April when the civil rights activist was inducted into the Clinton High School Hall of Honor. She returned Sunday to talk about him during the Clinton County Walk of Fame induction ceremony.

“He was an overachiever,” Toney said. Toney knows that Charles valued education, but she doesn’t know how he got to Clinton. “People of his generation were private and humble,” Toney said, and they didn’t have Instagram on which they could post every detail of their lives.

Charles Toney began fighting for equality for African Americans as a child. When he was 15, he confronted the city about its whites only policy at the city pool. As a competitive swimmer, Charles needed time in the water.

Charles began classes at St. Ambrose, but with the country in a depression, he had to find a job. He began working for John Deere. “As he told the story, he badgered the management until they sent him to welding school,” said Toney.

Charles was not afraid to take risks, said Toney. He began the Sepia Magazine before Ebony existed, though the magazine didn’t last long because of low advertising revenue during the depression.

Charles became known as the Dean of Affirmative Action and was respected nationally for his leadership. He died in 2009.

The name Volckmann invokes images of furniture for Clintonians who remember the family’s store on Fifth Avenue South. But Russell Volckmann’s fame reaches farther than the shores of the Mississippi.

Born in 1911 in Clinton, his father was furniture founder, William J. C. Volckmann. The store used only one N in the name.

As a child, Russell watched the bridge for German sympathizers, said his son William during Sunday’s induction ceremony. At the age of 14, Russell attended Shattuck Military Academy in Fairbault, Minnesota. In 1930, he entered West Point.

Russell Volckmann was the leader of the Philippine Commonwealth military resistance against the Japanese in the Philippines from 1942-945. After the war, he helped create the U.S. Army Special Forces.

Inductee Artemus Lamb Gates was also honored for his military services. Born in 1895, the American businessman, naval aviator and Assistant Secretary of the Navy was decorated by the United States with the Navy Distinguished Service Medal, by Great Britain with the Distinguished Flying Cross and by Franc with the Croix de Guerre.

But Gates had no family with which to share the honor Sunday.

“Clinton probably wouldn’t exist if it hadn’t been for the Lamb family,” said local historian Mike Kearney, who nominated Gates.

Gates grew up at Oakhurst in Clinton. He graduated from Hotchkiss School in 1914 and received his bachelor’s degree in 1918 at Yale University.

After serving in World War I, during which he was captured by the Germans, Gates returned to New York and, at the age of 25, became the youngest bank president at a bank in Manhattan.

In 1922, Gates married the daughter of a senior partner at JP Morgan, said Kearney. “He commanded a great deal of respect.”

The couple had no children of their own, but Kearney said they adopted two girls. Kearney hasn’t been able to locate them or their descendants, he said.

Kearney accepted the award for the Lamb and Gates families. It will display at the Clinton County Historical Society Museum.