The Latest: VP talks up 'American aspiration' in 1st speech 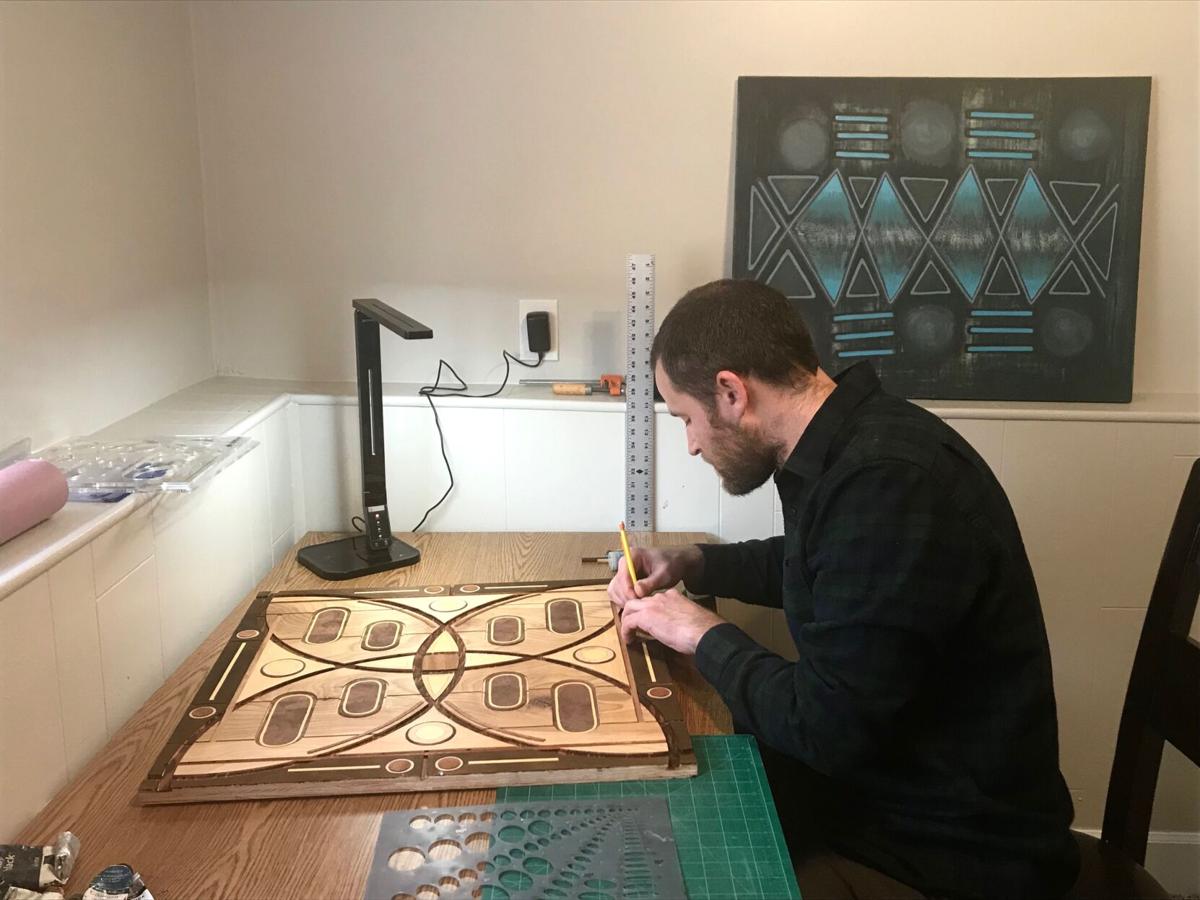 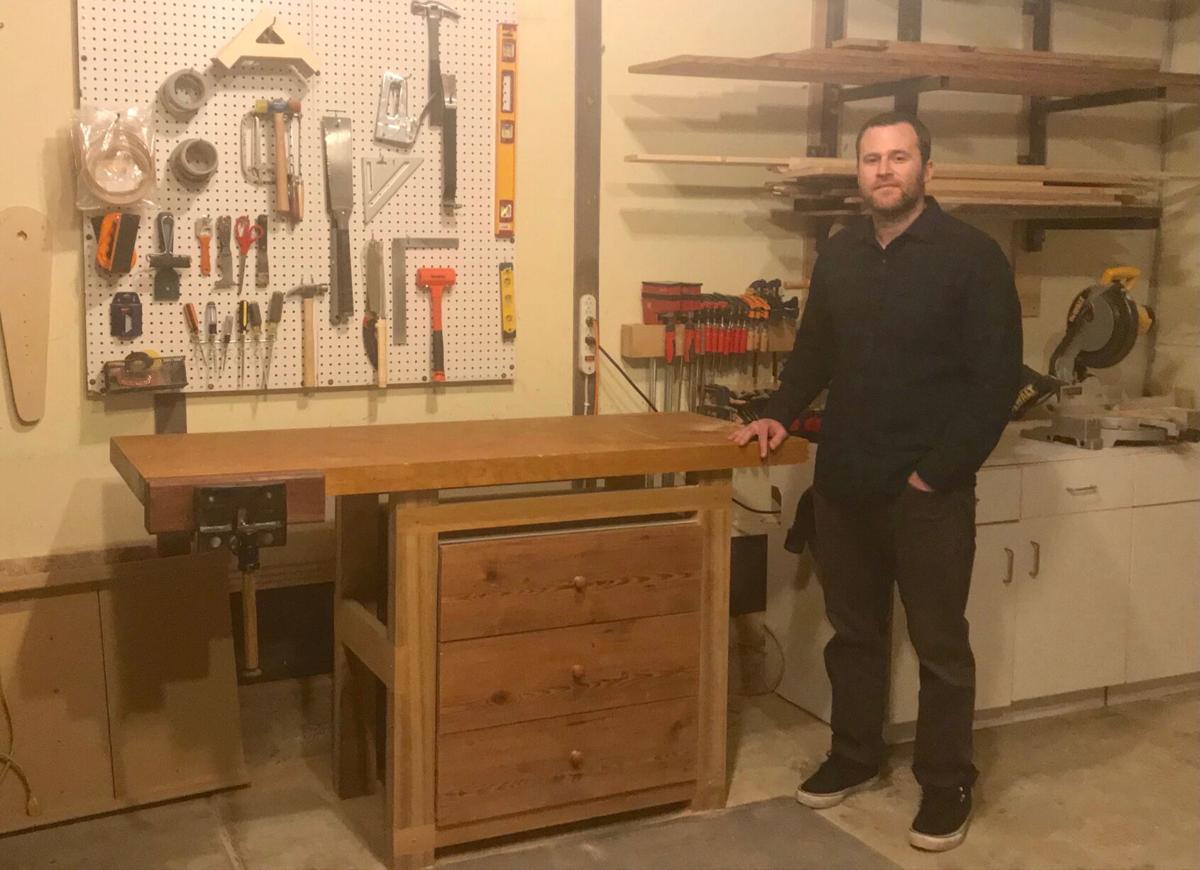 Craig Rempfer stands in his work space where he creates motifs in wood. A 2004 graduate of Clinton High School, Rempfer nabbed a solo show at Shelter gallery in New York City. His work is on display through Jan. 16. 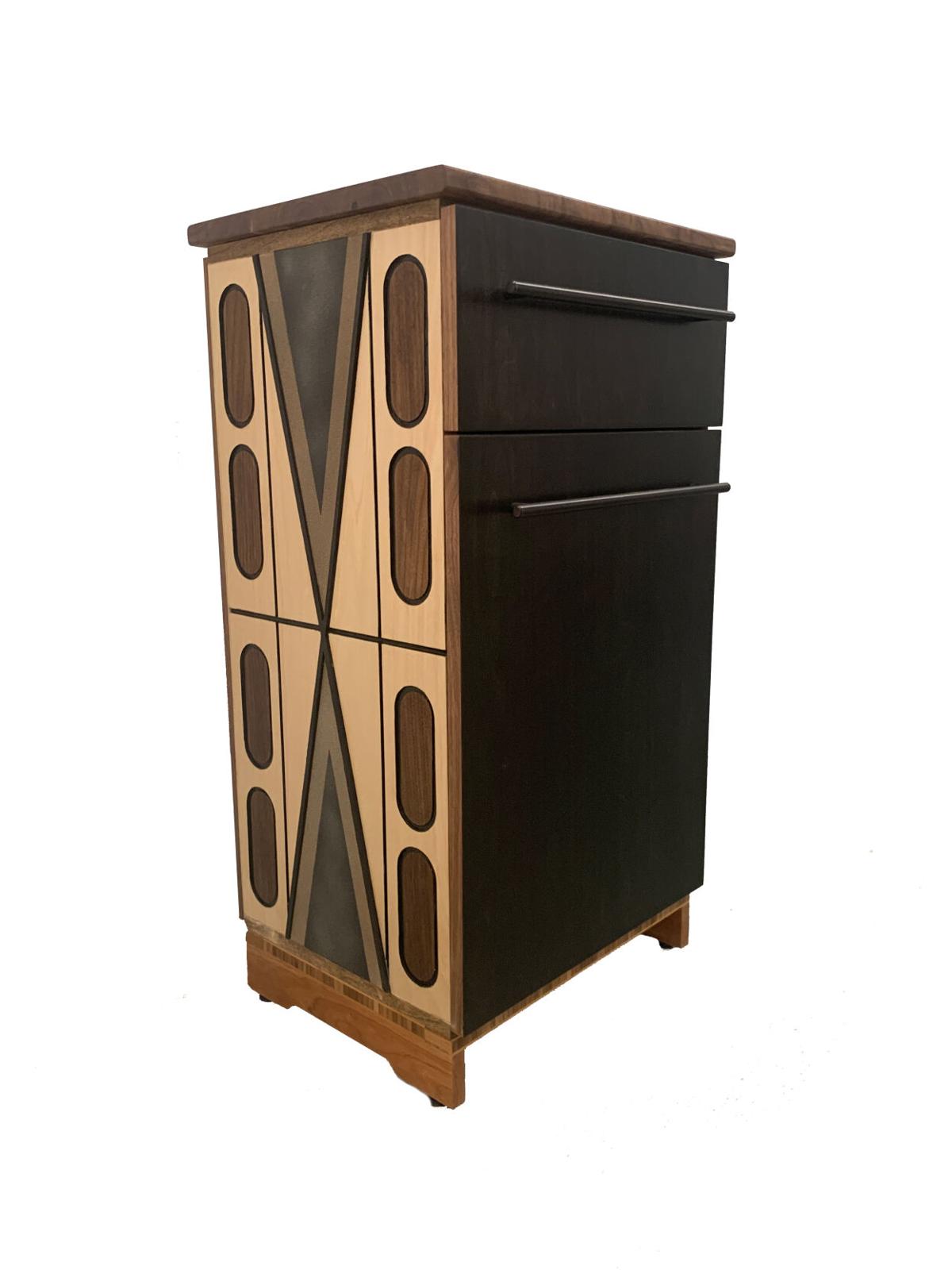 This cabinet by Craig Rempfer, made with walnut, maple, cherry, bamboo and acrylic paint, is part of the artist’s debut solo show at Shelter art gallery in New York City. 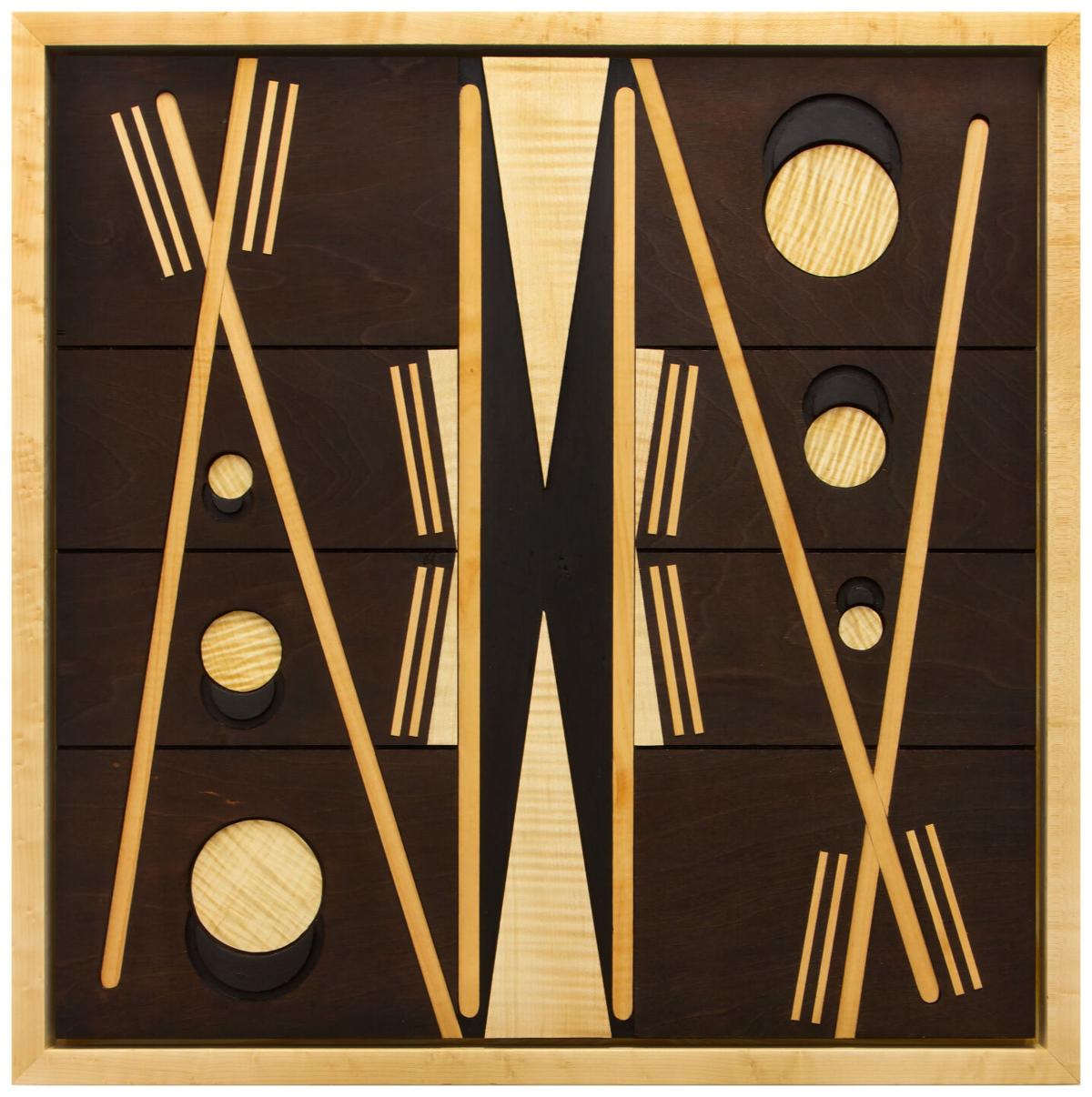 This untitled piece of art by Craig Rempfer, formerly of Clinton, is of mixed wood species, dye and oil paint on plywood. Submitted photo 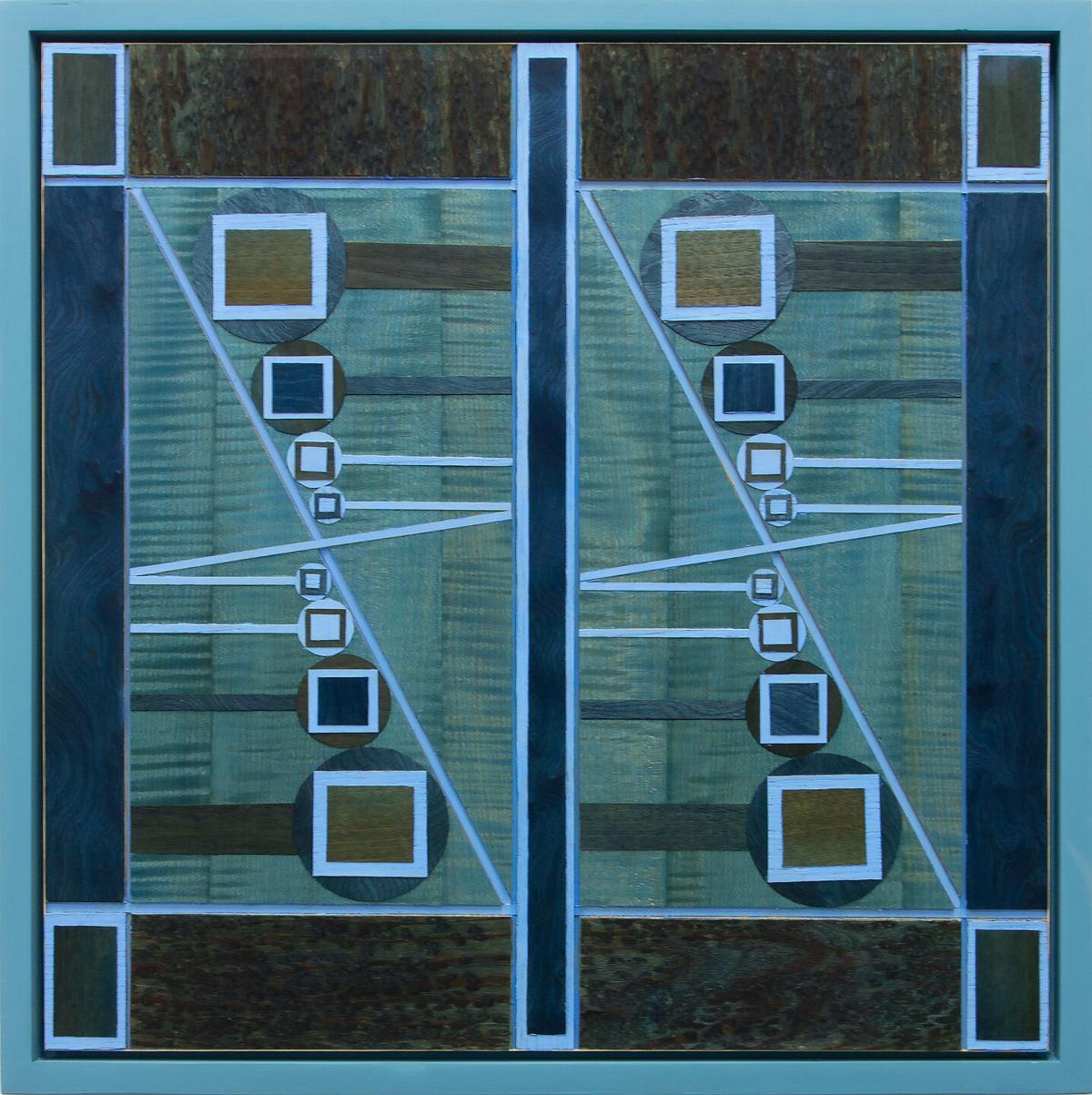 Craig Rempfer stands in his work space where he creates motifs in wood. A 2004 graduate of Clinton High School, Rempfer nabbed a solo show at Shelter gallery in New York City. His work is on display through Jan. 16.

This cabinet by Craig Rempfer, made with walnut, maple, cherry, bamboo and acrylic paint, is part of the artist’s debut solo show at Shelter art gallery in New York City.

This untitled piece of art by Craig Rempfer, formerly of Clinton, is of mixed wood species, dye and oil paint on plywood. Submitted photo

CLINTON — Craig Rempfer finally has a solo show. They aren’t easy to come by, and without a chance meeting with a gallery owner, Rempfer might still be waiting.

Rempfer’s art will be displayed at Shelter gallery in New York City through Jan. 16.

Rempfer, a 2004 Clinton High School graduate, has always loved creating art, he said. He carried a sketch book from a young age. From elementary school through high school and advanced placement art, “I always loved the art classes I took.”

Most of his works were drawings, Rempfer said, though he painted in class with acrylic or tempura on paper. “I didn’t really do any painting on my own. It was always just kind of at school.”

“He’s not one to boast about his own work,” said Craig’s father, Doug Rempfer. Craig has always been artistic. He’s been wearing glasses since he was 4 or 5 years old, and he loved frogs, so he’d draw pictures of frogs and put glasses on them.

When Craig went to college at the University of Iowa, he began creating abstract art. Then he began making furniture, creating art in wood.

He stayed in Philadelphia after graduation, taking odd jobs to pay the bills. “I pretty much was just making paintings,” Craig said, but instead of using canvas, he painted on wood panels.

A friend had an open space where he was living, so Craig moved to New York, he said.

“I really didn’t sell much at all when I was living there. It’s not that I didn’t try.” Opportunities can be difficult to find, Craig said. “It seems sort of random how people just get opportunities.” He has talented friends who’ve never had solo shows, he said.

“I had a large variety of jobs while I was there,” he said.

Craig worked in carpentry, construction and in furniture shops, he said. Craig landed a job at a gallery in New York and worked there for about 2 1/2 years,

An artist friend had his own business building pedestals, and he sent work Craig’s way from time to time. “He knows I build things.”

Craig made a few pedestals for Shelter gallery. That’s how he met the gallery owner, Rachel Cohen.

In about 2017, Craig began making designs with wood rather than with paint. “It just kind of made sense,” he said. “I’d already worked in furniture shops and had an interest in woodworking.

“I used the same kind of motif I would use in oil painting,” he said, but he made it of wood. “It’s just more of an enjoyable process.”

Craig had been part of smaller shows before, he said. In 2011, Craig showed his work at the R.E.S.P.E.C.T. exhibit at Cornell College in Mount Vernon. He was part of Phasescape, Grey Area at Crane Arts in Philadelphia in 2011.

A Tyler student at the time, Craig displayed three mixed-media paintings, which Crane said were “full of beauty and ornate graphic moves. Like wild style graffiti as if practiced by the Mayans, Rempfer draws shapes and objects that are biomorphic and lines and shapes that repeat in an obsessive and almost ritualistic way.”

“Rempfer, a woodworker by trade, explores the possibilities of wood both as a painting surface and as an aesthetic tool.” Different grains carry pattern, color and textural variations that are juxtaposed in Rempfer’s art.

“The exhibition’s title, Book Match, refers to the matching of grains on pieces of wood to crate a mirror image,” the gallery said.

Craig and his girlfriend, who is from Connecticut, moved to Westminster, Colorado in January “just to make a change.”

Craig won’t be going to the gallery for his show. “It’s still up until Jan. 16, but just, with COVID, I’m not going to fly.”

New York has seen different levels of shutdown during the pandemic. Some galleries are open by appointment only, while others allow walk-ins with masks, Craig said.

“It’s probably a bit slower that it would [otherwise] be.”

Joan Naftzger, 92, formerly of Clinton passed away in Morton, Illinois on January 19, 2021. Snell-Zornig Funeral Homes and Crematory is assisting the family with arrangements. Graveside services will be held at a later date.