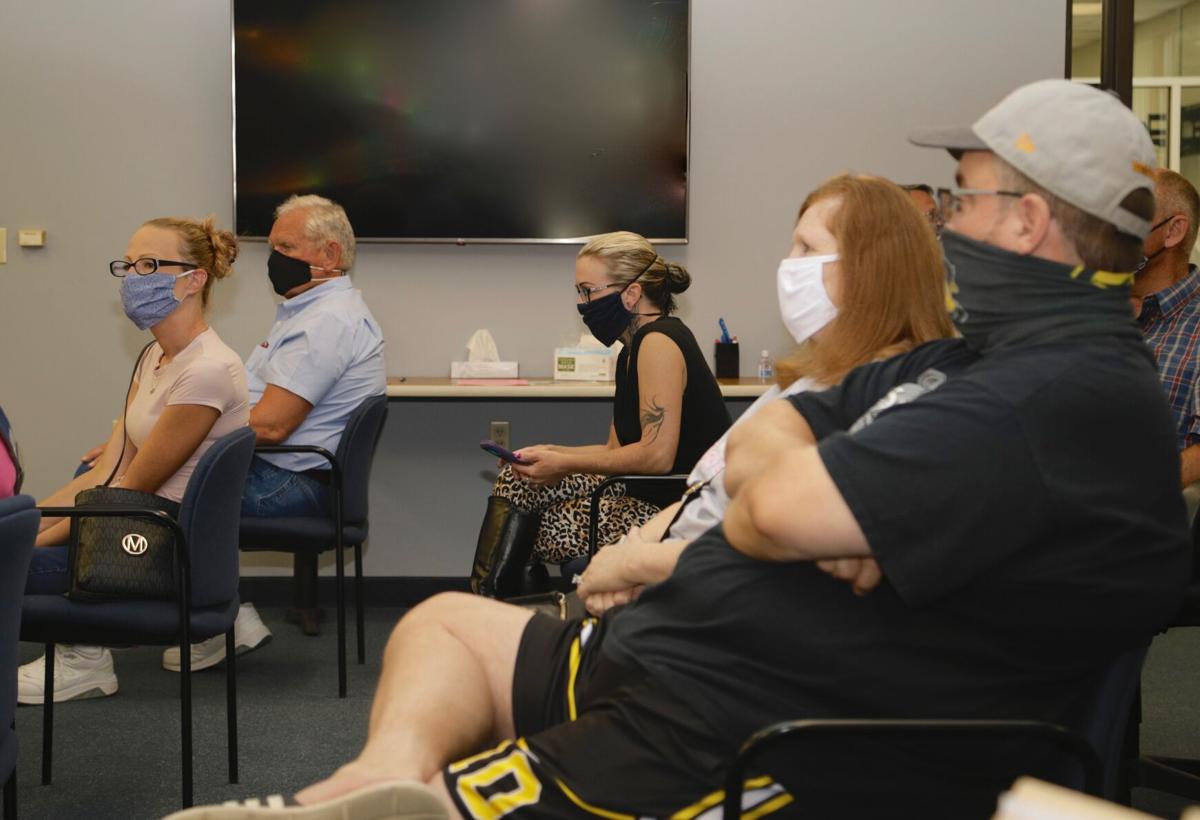 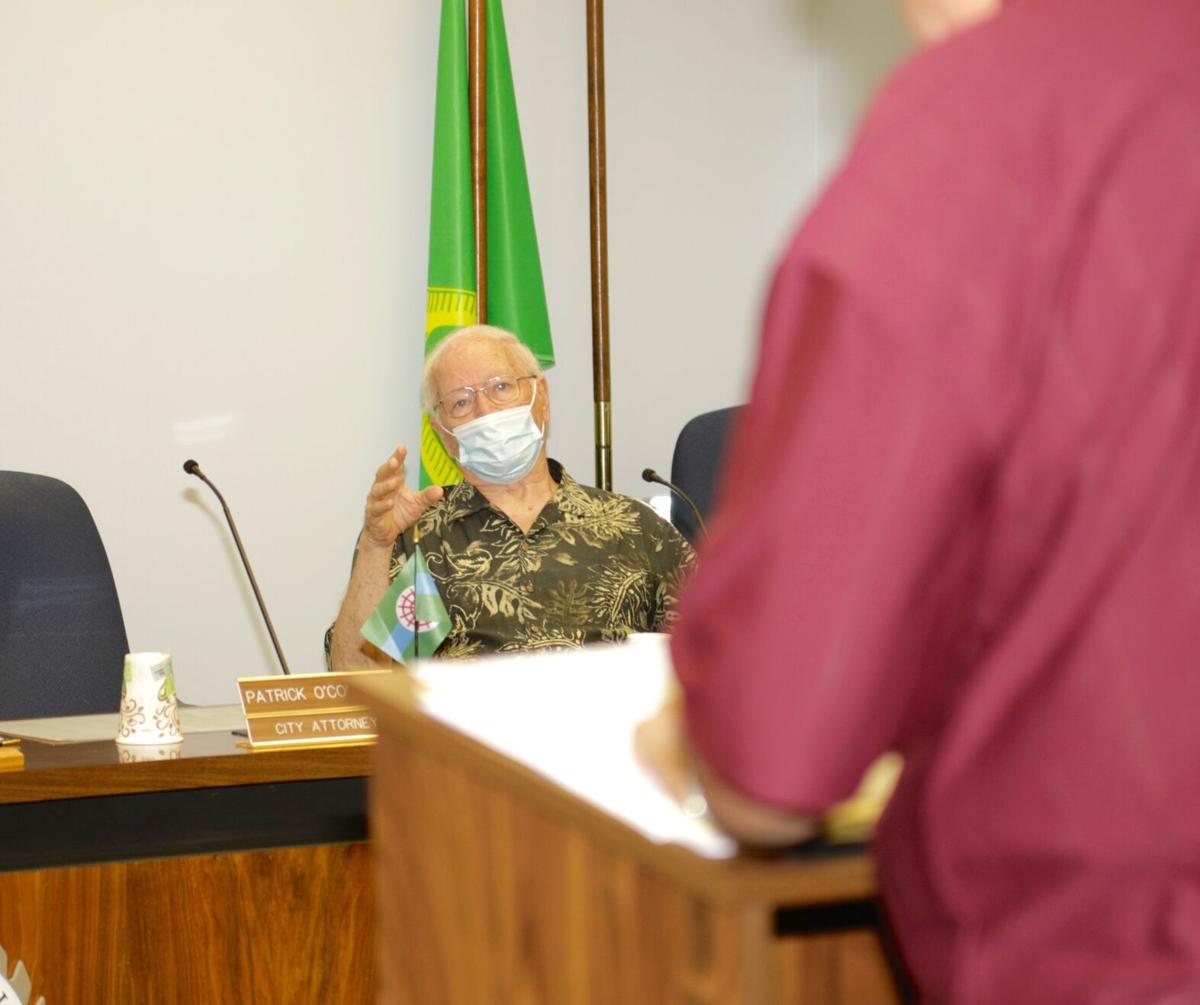 Dwaine Sievers of the Clinton Planning Commission speaks with resident Alan Thompson during Wednesday’s Commission meeting. Sievers said during the meeting that Clinton is fortunate to have Bill Wilford developing the property north of Springdale Cemetery.

Dwaine Sievers of the Clinton Planning Commission speaks with resident Alan Thompson during Wednesday’s Commission meeting. Sievers said during the meeting that Clinton is fortunate to have Bill Wilford developing the property north of Springdale Cemetery.

(Editor's note: Updated to correct the name of Christina McCusker.)

CLINTON — Despite objections and accusations from neighbors of Springdale Cemetery, the Clinton Planning Commission has forwarded the final plat of Riverstone Crossing First Addition to the Clinton City Council for approval.

The Commission approved lots 1-24 and lot 26 with the stipulation that a gate close Ninth Avenue North to through traffic until 30 homes in the development are occupied, and that lot 25 and other additions to the subdivision be resubmitted to the Planning Commission before they are developed.

The Final Plat for the First Addition shows 24 lots available for home construction in the development located north of Springdale Cemetery. Residents on neighboring cul-de-sac Ninth Avenue North continued their objections to the extension of the street, the cutting of trees and future increased traffic.

Commissioner Dwaine Sievers asked Thompson if he were trying to take the place of the Commission. The Planning Commission asks all pertinent questions of the city engineer before approving a development, Sievers said.

Thompson said he was simply trying to get to the truth, suggesting that the city has been complicit and allowed developer Bill Wilford to violate ordinances to push through the development.

Thompson repeated his claims from previous meetings between residents, Wilford and the city that trees were removed in violation of city ordinances.

The Commission didn’t meet to talk about trees, Sievers said, but to make sure ordinances are followed.

Craft said he received Wilford’s storm sewer plan July 29 and checked it to make sure it met standards. He received a revised plan July 30 and suggested three changes, he said.

Dave Meyer, engineer for Wilford’s project, was looking into the first two concerns and the third one had already been taken care of, said Craft.

“Yeah, they do have to make some revisions,” said Craft, but the stormwater retention is more than capable of handling it, and the sanitary sewer system on Springdale is large enough to handle the additional residences.

Wilford will also report to the Department of Natural Resources, said Craft, to make sure he adheres to the stormwater pollution prevention plan. According to the Environmental Protection Agency, a SWPPP describes all the construction site operator’s activities to prevent stormwater contamination, control sedimentation and erosion and comply with the requirements of the Clean Water Act.

Meyer said he hadn’t filed the plan yet because he has to file the final plat with it, and the plat hadn’t been approved.

Craft explained that many of the issues Thompson addressed to the Planning Commission are details that will be presented to the City Council.

Wilford did not choose a good site, did not contact neighbors for their input and did not follow the city’s ordinances concerning removal of trees, Thompson said, but he didn’t do any of this on his own. He sought city advisement every step of the way, Thompson said.

“What are our options when ordinances have been thrown out the windows?” Thompson asked.

You don’t know what you’ve got till it’s gone, said Thompson, quoting a Joni Mitchell song. “They paved Paradise and put up a parking lot.”

“I have no issue ... with you building new houses,” said Ninth Avenue resident Christina McCusker. She doesn’t want her street changed to a through street, however. Trucks removing trees from the property used Ninth Avenue and nearly clipped cars parked on the street, she said.

Ninth Avenue has been damaged by semitrailer traffic, McCusker said. “I’m strongly against Ninth as an access point.”

McCusker likes living on a dead-end street because she has young children, and it’s safer for them, she said. Neighbors know to watch for them. Making Ninth Avenue a through street “disrupts the whole neighborhood,” McCusker said.

Aleshia Bartels also moved to the cul-de-sac because it’s safer for her children. A mother of six children, Bartels liked the quiet neighborhood, she said.

“We all understand how you feel,” said Commissioner Carolyn Tallett, but the Commission’s task Wednesday was to approve or disapprove the final plat. “Unless it has anything to do with the plat ... I think we just need to move on.”

Riverstone Crossing is exactly what Clinton has been asking for, Clinton Realtor Steve Howes said. Wilford isn’t moving housing to the outskirts of the city but is developing land in the middle of town.

Wilford has purchased a piece of ground and followed engineering specifications, Howes said. He has “bent over backward. [He] wants to do something positive for this town.”

The city is “very fortunate” to have Wilford take over the development of the land north of Springdale Cemetery, said Sievers.

The Commissioner said he drove to Eldridge to look at the subdivision Wilford developed there. The homes are beautiful, Sievers said. “He is selling $300,000 homes.”

By opposing development, “You’re locking yourself into keeping the prices down to the detriment of the community,” said Sievers. He’s not minimizing the concerns of the 14 property owners on Ninth Avenue, he said. “But we have to do what’s best for 26,000 people.”

“We haven’t sold those homes because no one is building them,” Sievers said. “We’re fortunate to have Mr. Wilford as the builder involved in this.”