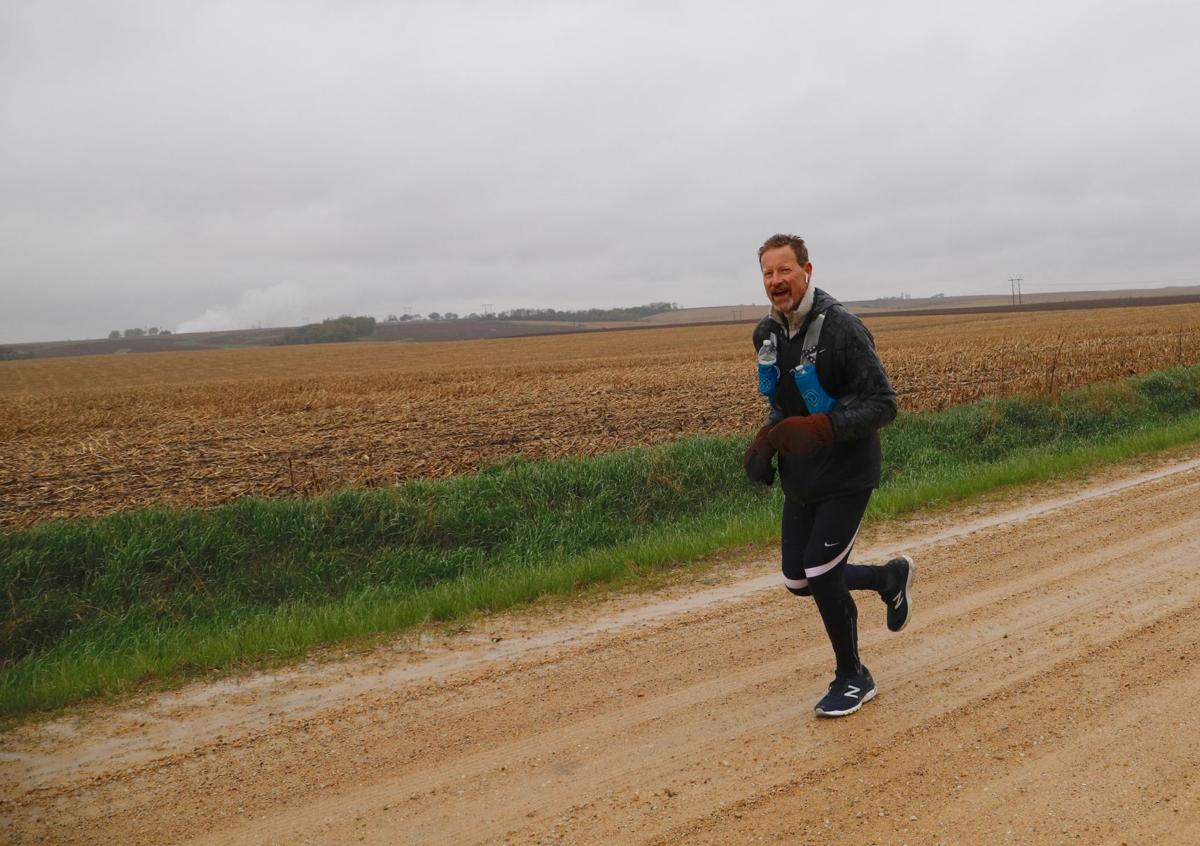 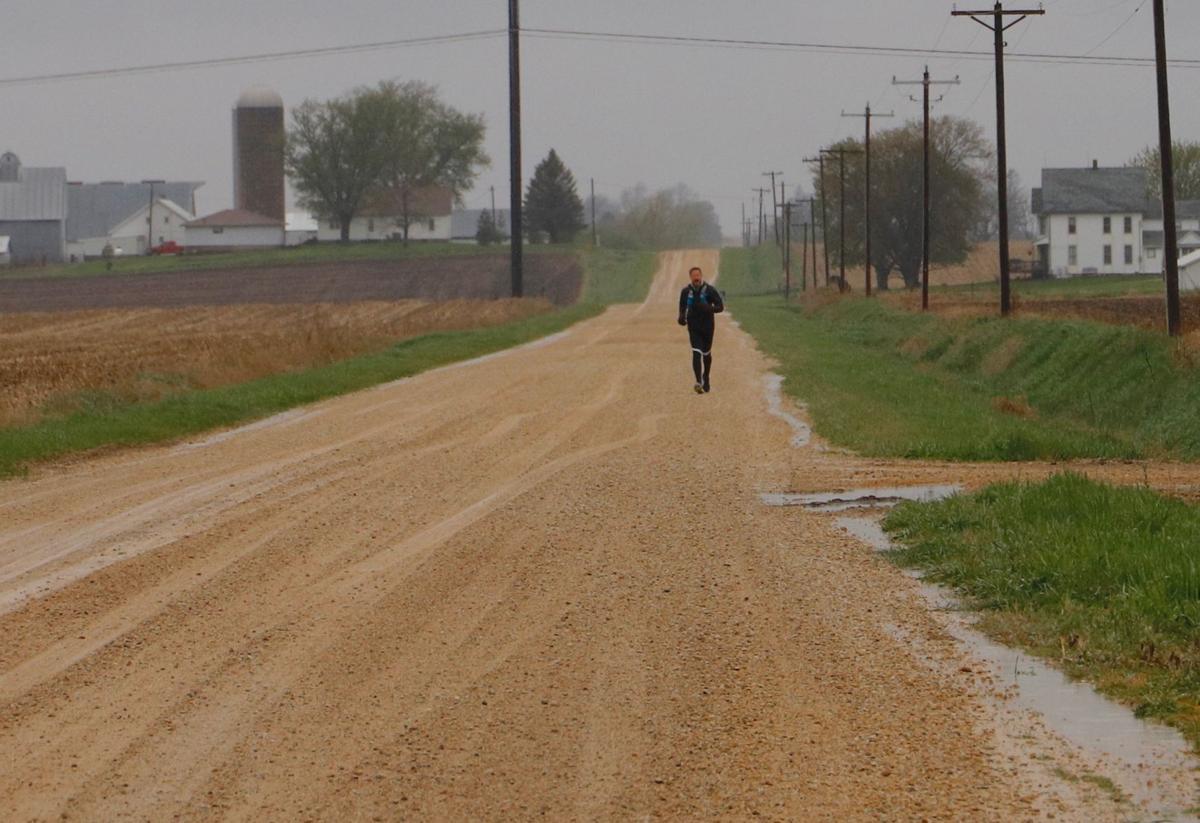 Mike Wolf runs 26 miles in a cold rain before work Tuesday morning to raise money for Council for a Strong America. The County Attorney started his run in DeWitt before daylight and finished at the Clinton County Courthouse before 10 a.m. Winona Whitaker/Clinton Herald

Mike Wolf runs 26 miles in a cold rain before work Tuesday morning to raise money for Council for a Strong America. The County Attorney started his run in DeWitt before daylight and finished at the Clinton County Courthouse before 10 a.m. Winona Whitaker/Clinton Herald

CLINTON — On a lonely gravel road west of Clinton, Mike Wolf runs in a cold rain. He’s in training for one of the most prestigious races in the world — the Boston Marathon.

But Wolf doesn’t run for awards or fame — he didn’t even qualify the marathon by having a fast time.

Wolf runs to keep children out of court.

Wolf ran the 26 miles before work as part of #GivingTuesdayNow while training and raising funds for Fight Crime: Invest in Kids.

Founded in 1996, Fight Crime: Invest in Kids is a program of Council for a Strong America that looks at strategies to reduce crime and put kids on the path to productive lives, its website says.

Wolf began Tuesday’s run about 4:30 a.m. His son, Ben, dropped him off in DeWitt in a steady rain and 39-degree temperature.

The coldest temperature he’s run in was 14 below zero, Wolf said. He told his son Tuesday, “This is a heatwave. It’s 50 degrees warmer.”

Wolf ran his first marathon at age 51, about two years after he started running with his son, Sam, who was getting in shape for the Naval Academy.

Wolf was a swimmer in school, not a runner, but he didn’t want his son to go to the Naval Academy, fail the fitness requirements and be told to go home. “So I went out and started running with him, and I got the bug from there.”

Wolf met other runners. He began running 5K races. Then 10Ks. Then someone said, “Let’s do the marathon.”

“The idea of a marathon seemed daunting or impossible,” said Wolf. “I would say to get into physical condition, it took me at least two years. You just have to get your body used to it.”

Now 59, Wolf is not only used to running, he needs to run to have a good day.

“I do have a passion for marathons,” Wolf said. “I’ve done about a dozen now.”

When Council for a Strong America received permission to participate in the Boston Marathon, it sent emails asking for volunteers to run.

“I did the Chicago a couple of years ago. It’s really a blast,” Wolf said.

Wolf had been training for the St. Louis Marathon, so he told Strong America, “I’m training right now, so I could possibly do that if you want to consider me.

“It’s one of those things where you send an email back, and you kind of forget about it,” Wolf said. About three weeks later, Strong America emailed back that they’d like Wolf to run.

Wolf’s sister lives in Boston, about three blocks from the race course, he said. She planned to take care of Wolf and his wife while they were in Boston for the race April 20.

But coronavirus derailed their plans. The race is now scheduled for Monday, Sept. 14.

In a fundraising letter, Wolf said, “Over my 21-year career, I have seen firsthand how much better it is to prevent crime than to deal with the aftermath of it. We need to invest in programs and initiatives like high-quality early education, nutrition, afterschool, and physical activity that help children get on and stay on the right track, which is exactly what Fight Crime: Invest in Kids advocates for here in Iowa and at the federal level every day.”

“I feel that there’s an opportunity to do what I can to ... support children,” Wolf said during Tuesday’s run.

Wolf has worked with Kids First Academy in Camanche and is a board member for the Mississippi Bend Area Education Agency.

As a county prosecutor, he’s seen how a lack of support and social structure can propel children into the court system, through crimes they commit or through loss of a parent who was a victim or perpetrator of a crime.

“Believe it or not, criminals have families too,” Wolf said.

Reaching children at an early age increases their chance of success, Wolf said. That’s what Invest in Kids tries to do. “People don’t see that. They don’t see prevention,” said Wolf.

“People, ... in their hearts, want to have relationships,” Wolf said. Invest in Kids tries to create those opportunities.

“I never made it where I am at without all the people who stopped to help me,” Wolf said. “We all need other people to help us to get where we’re at.”