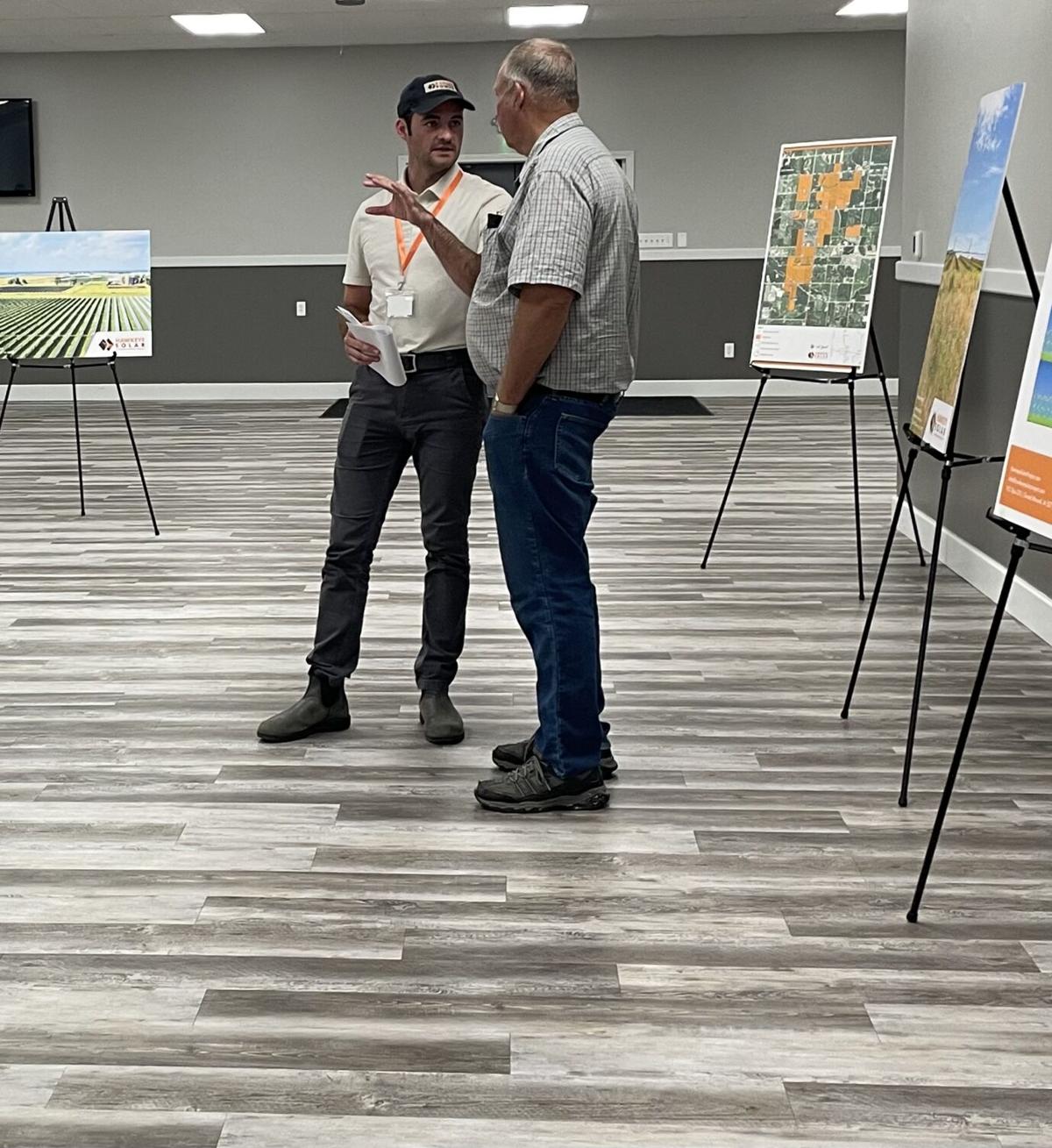 Sam O’Keefe, left speaks during an open house Tuesday at the Grand Mound Community Center for a proposed solar project in Clinton County. 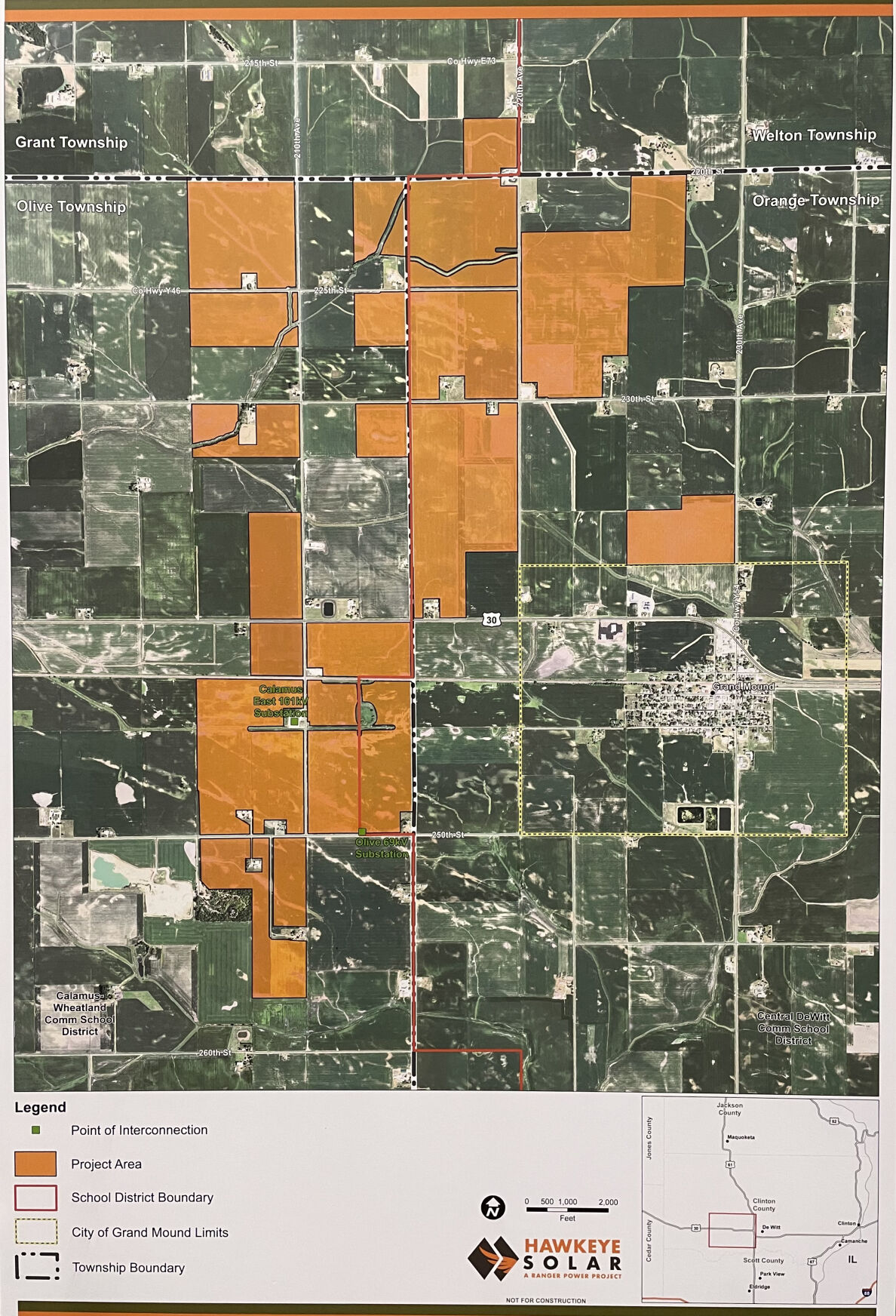 Sam O’Keefe, left speaks during an open house Tuesday at the Grand Mound Community Center for a proposed solar project in Clinton County.

Ranger Power is developing the Hawkeye Solar Project in partnership with private landowners near Grand Mound. The project would generate clean and low-cost energy for families and businesses in Eastern Iowa with the capacity to power more than 50,000 Iowa homes, the company said last week.

Ranger Power expects to occupy around 1,500 acres of privately owned farmland around the City of Grand Mound, Project Developer Sam O’Keefe said. It has been working for some time with private landowners on voluntary participation in the project, he said.

“Typically it’s a lease agreement that we offer for the long term,” O’Keefe said. “One of the reasons why we were attracted to this area to begin with is the existing high-voltage transmission infrastructure. And so, that’s a good opportunity to plug in a project like this,” he said.

“And then, more broadly, the committee’s actually been really receptive to us over time. Built a lot of great relationships locally,” O’Keefe said.

The next immediate step for the project is to obtain necessary permits, O’Keefe said. The group expects to submit permit applications in about one month, O’Keefe said. The earliest the company could start construction would be about a year from now, he said.

With a timeline of 12 to 18 months to construct the project, Ranger Power expects the project to be online in 2024, O’Keefe said.

Project developers believe one of the major benefits of the project is the tax benefits to the local community. They estimate over $12 million in new taxes will be paid out over the project’s life, with 50% going to the Central DeWitt and Calamus Wheatland School Districts; 40% to Clinton County for roads, infrastructure and public services and 10% to local townships, area colleges, agricultural extension, assessor and state.

Ranger Power first identified the potential for the project in Clinton County in late 2018 or 2019, O’Keefe said. It has been a gradual process since then to be confident in the community support for the project to move forward.

“We want to emphasize that all participation is purely voluntary,” Hamilton said. “There’s no eminent domain or any sort of forced participation in the project. So all land agreements are privately negotiated, voluntary,” he said.

“And so, it’s reasonable that it takes some time to find adequate land to support the project and also to build that community support that Sam (O’Keefe) was discussing,” Hamilton said. “That’s something that we generally want to spend one or two years going ahead of ever submitting a permit application.”

Solar use is very light on land, Hamilton added. Once the project has reached the end of its useful life, the project will be removed from the land and the land will be returned to a site that is suitable for agriculture, he said.

The Hawkeye Solar Project is expected to reduce carbon dioxide emissions by hundreds of thousands of metric tons annually, equivalent to taking nearly 100,000 cars off the road, the company said.

Solar projects are modular by design, which allows Ranger Power to adjust the layout to avoid impacts to sensitive resource areas. There is also 12-20 feet between arrays to allow areas for native grass species and pollinators to grow.

Ranger Power is a utility scale development team that produces large-scale solar projects, Hamilton said. The buyers of power from its facilities are typically large utilities, either investor owned, municipal or cooperative, he said.

“We are mostly focused on the Midwestern United States,” Hamilton said. “So we have a portfolio of projects in nine different states sort of bounded by Iowa to the east, Missouri to the south and the Dakotas sort of to the west. And we have a presence in all of the states within that footprint.”