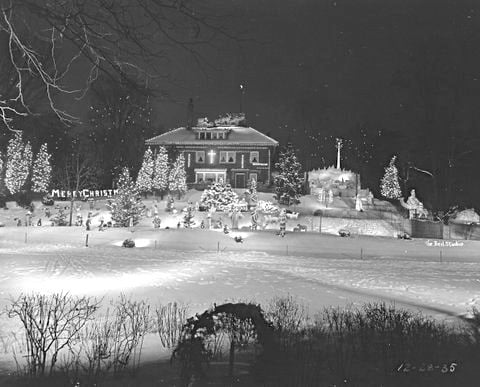 This Beil photo from 1935 shows the Iten Christmas display. 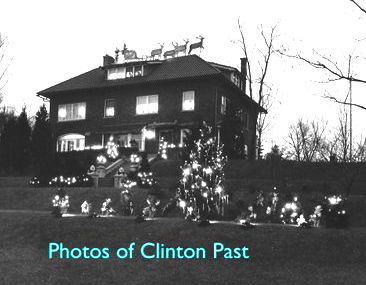 The Iten Christmas display is pictured in 1928. The Bill Taplin Collection

This Beil photo from 1935 shows the Iten Christmas display.

The Iten Christmas display is pictured in 1928. The Bill Taplin Collection

The Clinton History Club will hold a special holiday Christmas program at the Sarah Harding Home Thursday at 10:30 am.

The Sarah Harding Home is located at 308 S. Bluff St. The previous owner of the property was Frank J. Iten, a prominent Clinton business man. Iten was a leading community figure in establishing one of Clinton’s finest holiday traditions with his awesome outdoor Christmas displays.

In 1905, the Itens built one of the largest and most modern three-story baking facilities in the country at 619 N. Second Street. Iten died in September 1906.

The 1935 edition of the Palimpsest Magazine published by the State Historical Society of Iowa ran a prominent eight-page feature article on the famous Iten Christmas display in Clinton.

The display area was rapidly expanding.

“The 1929 Christmas display at the Iten home was hailed as the ‘Show Place’ of eastern Iowa and western Illinois,” the Palimpsest Magazine said. “In 1929, the Clinton Herald sponsored a community wide Christmas contest encouraging residents to have outdoor displays designed to beautify the city. ... Merchants offered valuable prizes.”

The Herald lighting contest was a community fixture for many years.

“By 1931, more than 1500 people gathered along Bluff Blvd. to witness the opening of the Christmas display,” the magazine noted.

“By 1933, the Iten Display was attracting national attention. ... Clinton police were kept extremely busy during the holiday season directing traffic along what locals called the Rock Ledge. ... Crowds often numbered in the thousands along the Rock Ledge in order to view the growing Christmas Display at the Iten home.”

It’s been nearly 95 years since Frank J. Iten placed a lighted Christmas tree on his front lawn. Over the years, the Iten display was moved to several different locations in the community.

Today the Iten display has been dispersed to the wind. Some remnants are still around. Last year the History Club located the star and the cross from the Iten display. The star and cross now have a happy home at the Clinton County Historical Museum and are on display.

Mention of the Iten display still resonates with locals and brings back many special memories for residents. Can you remember the various locations the Iten display was moved to? What was your favorite piece in the Iten display? How may objects can you name from the Iten Display?

Email your answers and your best holiday story about the Iten display to cbeiliema@clintonherald.com or post it on the Herald Facebook page.

Merry Christmas and Happy Holidays to all from the Clinton History Club.

The public and new members are always welcome to attend meetings.