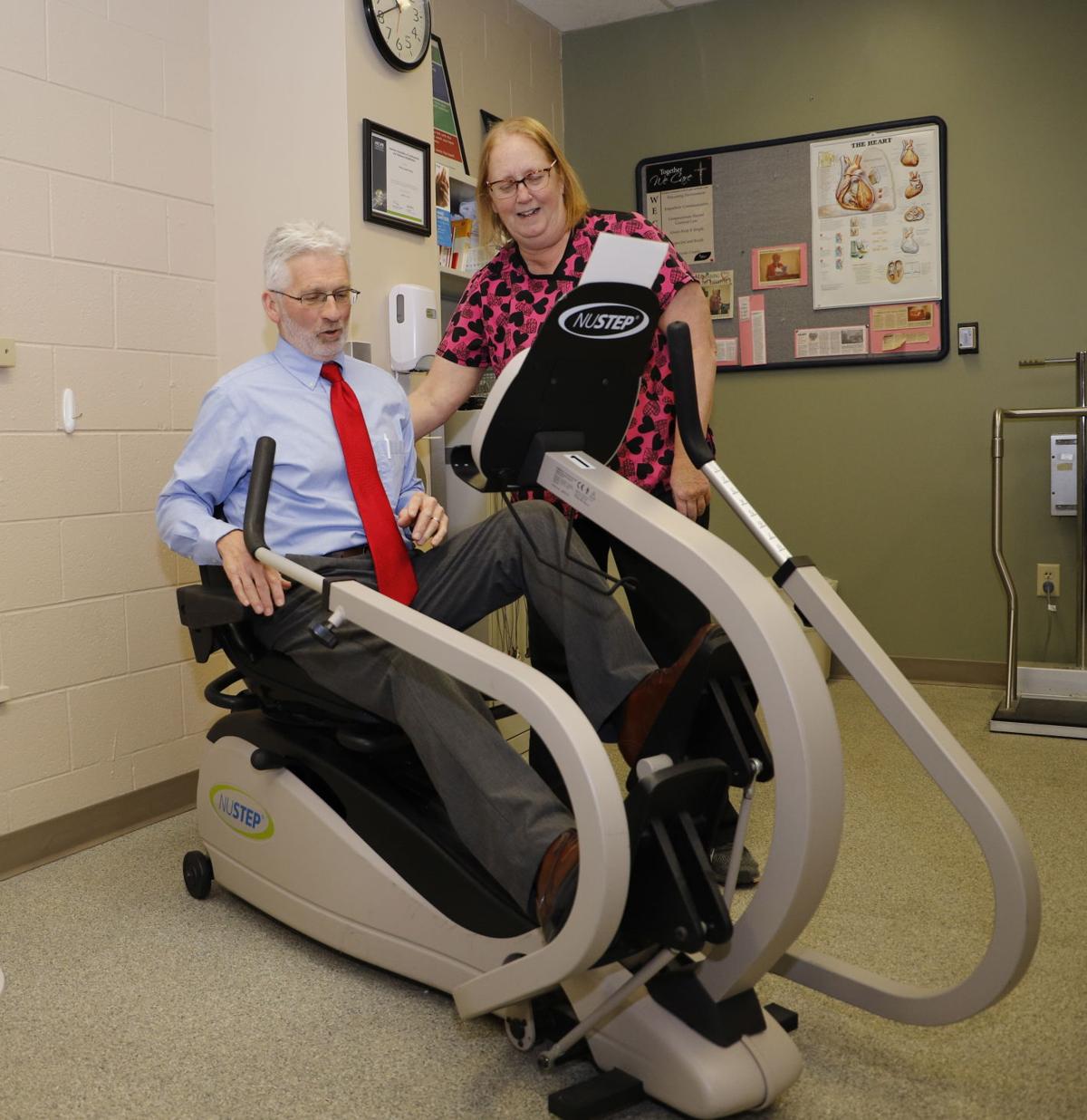 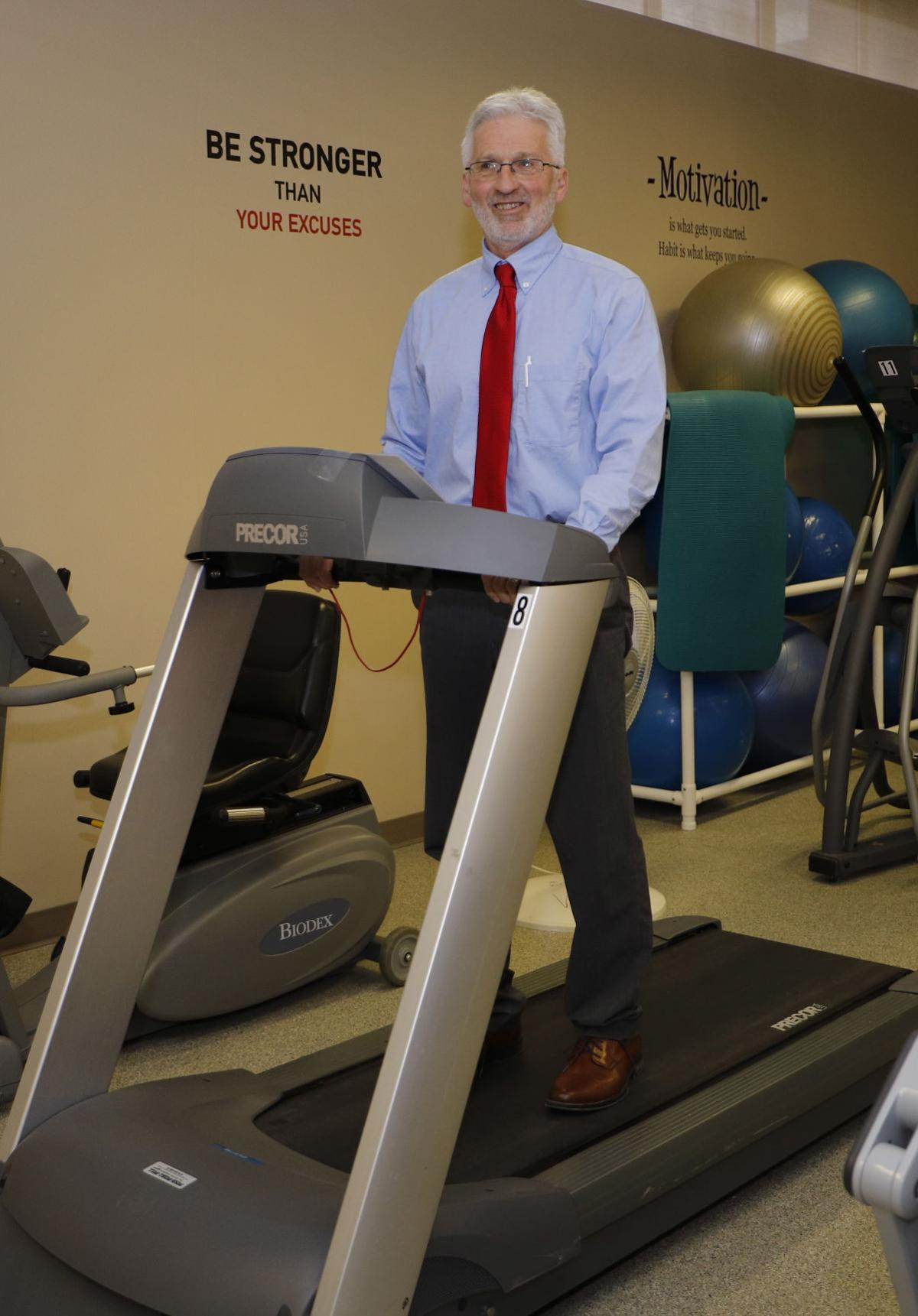 Gary Determan stands on a treadmill in MercyOne’s cardiac rehab unit. Determan worked out on the treadmill while recovering from a heart attack last year.

Gary Determan stands on a treadmill in MercyOne’s cardiac rehab unit. Determan worked out on the treadmill while recovering from a heart attack last year.

Editor’s Note: February is American Heart Month. Each Thursday throughout the month, the Clinton Herald will publish feature stories about those who have survived cardiac events as well as ways that readers can improve their own cardiovascular health. This is the second story in our series.

CLINTON — Gary Determan’s third-oldest child, Kyle, was driving in from North Liberty to celebrate his 40th birthday with a meal at Rastrelli’s, but a heart attack “ruined the whole thing,” Determan said.

A KROS radio personality, Gary Determan has always been in pretty good health, he said, but his blood pressure has been high for years. It runs in the family.

“[On April 17], I had a heart attack, but it was very minor,” Determan said in January.

Determan has worked for KROS radio for 44 years as an on-air personality with his show “Gary in the Morning” and directing local sports coverage. In his younger days, Determan ran track and played baseball and slow pitch softball.

“I have been a runner for a number of years,” Determan said. He ran three or four miles daily during his lunch hour or in the evening.

A couple of months before what his doctor called an episode, Determan began feeling “not right.”

“I worry easily,” said Determan. He went to see internal medical specialist Dr. Suheil Barakat. “I was scheduled to see him in about a month.”

Determan moved the appointment up to April 1 and had blood work done. Barakat recommended an electro-cardiogram.

Determan took a stress test. He ran fine, he said, but the test results weren’t good. He was sent to Dr. Saadi Albaghdadi. “And he had scheduled an angiogram a couple of weeks out, April 24.”

“I was just feeling worse,” said Determan. “They told me not to run.”

About 2 a.m. a terrible chill woke him. He debated whether to seek medical attention. His wife, Mary, told him he was going to the emergency room.

Determan’s younger brother, Mike, told him later that their mother had had a chill before her heart attack a few years previous.

Determan was admitted to the hospital and later that day, in the evening, Albaghdadi performed an angiogram and inserted a stent in an artery that had 80% blockage.

“Everybody was ... totally shocked,” said Determan. He was known as a runner and seemed to have no risk of heart attack. Genetics played a big part in his episode, Determan said.

“Even though I exercise, my diet wasn’t the best. I’m eating better now.”

Following surgery, Determan was assigned to cardiac rehab. “I enjoyed it,” he said. “It gave me the opportunity to work out.”

“Dr. Albaghdadi always calls me an athlete,” Determan said, and now he’s back to running.

“Because I’m 65, they want me to see the doctor every six months. If I stay on my medication, I’m a picture of health.”

The hospital staff is welcoming, Determan said. “I’d always get a hug from Kim [Anderson],” his licensed practical nurse. He made friends with the staff and walked the halls with other patients in similar situations.

Determan asked Albaghdadi if what he had was considered a heart attack.