The Latest: Vietnam has 1st local transmission in 89 days 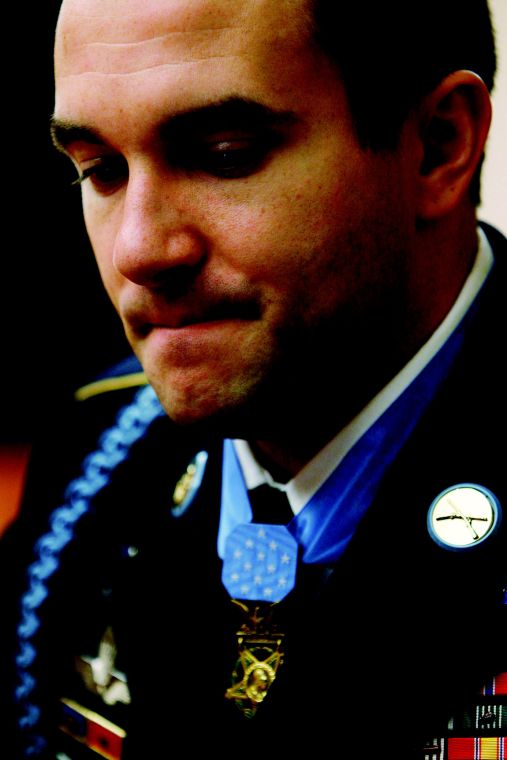 In this photo taken Wednesday, Dec. 15, 2010, Medal of Honor recipient U.S. Army Staff Sgt. Salvatore Giunta pauses during an interview in Chicago about his experiences in Afghanistan. 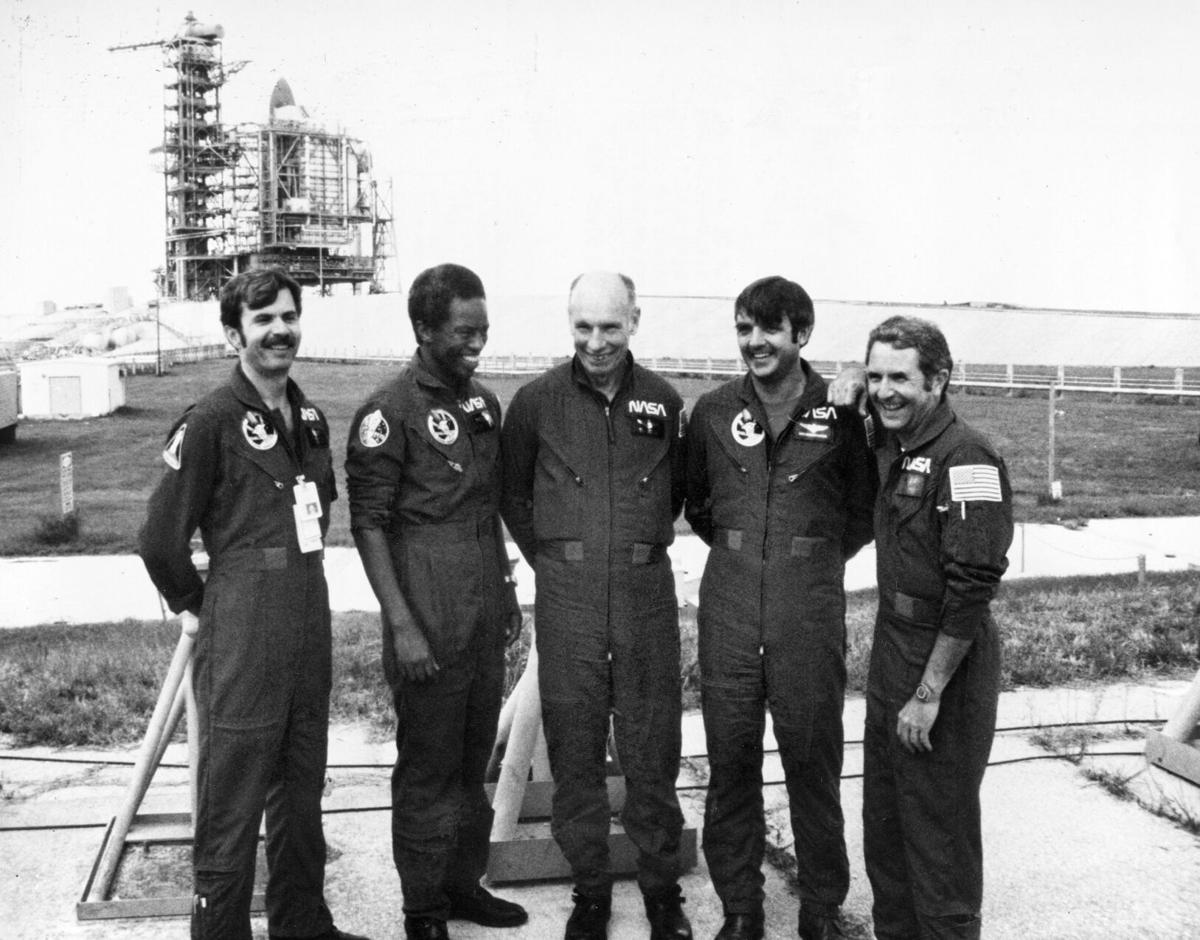 The crew of the space shuttle Challenger poses at launch pad 39A after a dress rehearsal of their launch day activities, Aug. 4, 1983. From left: mission specialists Dale Gardner, who has ties to Savanna, Ill.; Guion Bluford; Dr. William Thornton; pilot Dan Brandenstein; and Commander Richard Truly. 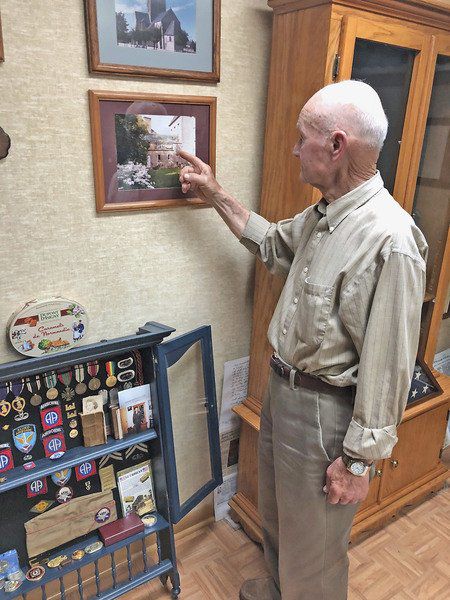 Henry Langrehr of Clinton describes his fall into the pictured greenhouse as he talks about D-Day and his mission as a paratrooper. 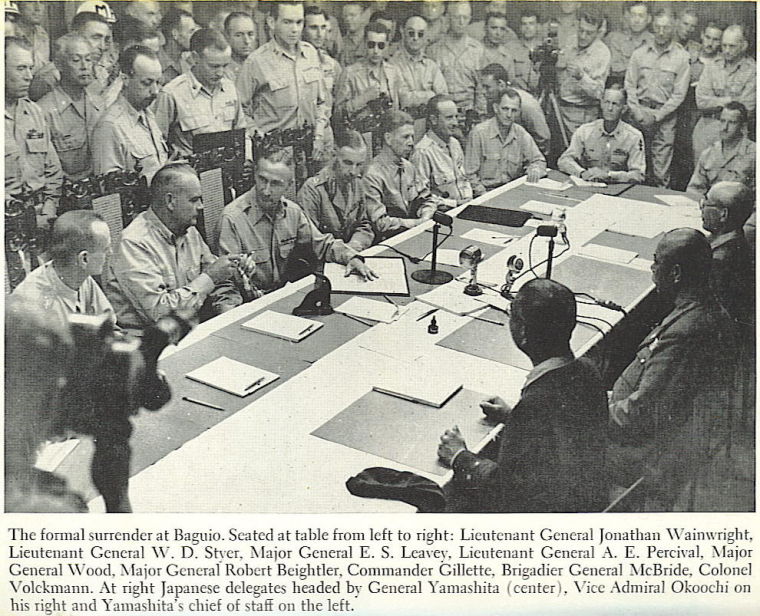 The formal surrender at Baguio, Clinton’s Russell W. Volckmann, a colonel at the the time, is seated at the upper right of the table. File photo

In this photo taken Wednesday, Dec. 15, 2010, Medal of Honor recipient U.S. Army Staff Sgt. Salvatore Giunta pauses during an interview in Chicago about his experiences in Afghanistan.

The crew of the space shuttle Challenger poses at launch pad 39A after a dress rehearsal of their launch day activities, Aug. 4, 1983. From left: mission specialists Dale Gardner, who has ties to Savanna, Ill.; Guion Bluford; Dr. William Thornton; pilot Dan Brandenstein; and Commander Richard Truly.

Henry Langrehr of Clinton describes his fall into the pictured greenhouse as he talks about D-Day and his mission as a paratrooper.

The formal surrender at Baguio, Clinton’s Russell W. Volckmann, a colonel at the the time, is seated at the upper right of the table. File photo

CLINTON — Streets in the new Valley Bluff Townhomes’ housing development will honor veterans and astronauts with ties to Clinton.

Diamond Builders released the following biographies of the men.

Clinton native Richard Bristol was killed in action during the Korean War. On Jan. 30, 1952, a B-29 Superfortress with a crew of 13 departed Kadena Air Base, Okinawa along with nine other B -29s on a bombing mission against a railroad bridge near Sunchon, North Korea. Bristol, the pilot, made a routine radio check-in with base 30 minutes after takeoff; this was the last contact made with the aircraft. It disappeared from radar over the East China Sea about 220 miles into its trip.

An extensive search did not find the aircraft, crash site, or crew.

Bristol, who joined the U.S. Air Force from Iowa, served with the 372nd Bombardment Squadron, 307th Bombardment Group. He is memorialized on the Courts of the Missing at the National Memorial Cemetery of the Pacific.

Astronaut Capt. Dale A. Gardner was born in 1948 in Fairmont, Minnesota, and grew up in Sherburn, Minnesota and Savanna, Illinois, but considered Clinton to be his hometown.

Gardner was selected as an astronaut candidate by NASA in January 1978 and logged a total of 337 hours in space and 225 orbits of the Earth on two flights. He logged more than 2,300 hours flying time in over 20 different types of aircraft and spacecraft. He died Feb. 19, 2014 in Colorado Springs, Colorado.

The bridge connecting Savanna, Illinois and Sabula was named for Gardner in November 2017.

David Hilmers was born in Clinton and is a veteran of four space flights. He logged over 493 hours in space before retiring from NASA in October 1992.

Hilmers was selected by NASA in July 1980 and completed his initial training in August 1981. In 1983, he was selected as a member of the launch-ready standby crew. His early NASA assignments included work on rocket upper stages and Shuttle software verification at the Shuttle Avionics Integration Laboratory.

Atemus Lamb Gates was an American businessman, born in Clinton in November 1895. He was a naval aviator and Assistant Secretary of the Navy for Air in charge of naval aviation during World War II.

Gates was briefly Undersecretary of the Navy in 1945. He was, at various times, President of New York Trust Company and a director of Union Pacific, TIME, Boeing, Middle South Utilities, Inc., Safeway, Inc., Abercrombie & Fitch Co., and ServoCorp.

Salvatore Giunta was born in Clinton, grew up in Cedar Rapids and graduated from Hiawatha High School. Giunta received the Medal of Honor on Nov. 16, 2010 for his actions as rifle team leader in Afghanistan in October 2007.

Giunta and Jennifer Lynn Mueller, a native of Dubuque, were married in October 2009 and are parents of a daughter.

Giunta chose not to re-enlist and left the army in June 2011. He and his wife moved to Colorado where he studied at Colorado State University.

Giunta has written an autobiography titled “Living with Honor”, published by Simon & Schuster.

Langrehr is a life-long Clinton resident. He was a member of the 82nd Airborne Division and was one of 6,000 who parachuted into France early in the morning of June 6, 1944.

Langrehr survived the jump, months of fighting and being wounded twice. He escaped from a Nazi prison camp after months of working as a laborer mining coal.

Langrehr was named a knight of the Legion of Honor for his actions during World War II. His book “ Whatever it Took” recently hit the shelves.

Private Mayes was born in 1837. He was a member of Company K, 11th Iowa Infantry during the Civil War.

“With one companion and under a fierce fire from the enemy and at short range, [Mayes] went to the rescue of a wounded comrade who had fallen between the lines and carried him to a place of safety,” his Medal of Honor citation reads.

The action occurred at Kennesaw Mountain June 15, 1864. Mayes earned the Medal of Honor in 1899 and died the following year.

Nelson was born in 1950, in Charles City and considers Willmar, Minnesota, his hometown, although some of his family had lived in Clinton County. He was selected an astronaut candidate by NASA in January 1978.

A veteran of three space flights, Nelson has logged 411 hours in space, including 10 hours of spacewalks.

Nelson was selected by NASA in January 1978. He flew as a scientific equipment operator in the WB 57-F earth resources aircraft and served as the Astronaut Office representative in the Space Shuttle Extravehicular Mobility Unit development effort.

Schultz was born and raised in Clinton. He was awarded the Distinguished Service Cross posthumously for extraordinary heroism in a conflict with an armed hostile force in the Republic of Vietnam, while serving with Headquarters and Headquarters Company, 2d Battalion, 47th Infantry, 9th Infantry Division.

On January 31, 1968, as squad leader of a mechanized infantry platoon on a combat mission in the village of Ho Nai, Schultz, with his squad and other members of the platoon, became isolated and were surrounded by a numerically superior force. The troops on the ground were pinned down, and Schultz’ armored personnel carrier was forced to halt.

To relive the pressure on his comrades, Schultz leaped from the vehicle and assaulted an enemy machine gun nest, single-handedly destroying it and its occupants. Although seriously wounded, he attacked a second machine gun position.

Hurling grenades as he charged through a curtain of hostile fire, Schultz killed the entire gun crew and was mortally wounded.

Volckmann was born Oct. 23, 1911. During World War II, he embedded with Filipino soldiers.

Called by some the father of Special Forces, Volckmann spent three years behind enemy lines in the Philippines using guerilla tactics against the Japanese.

Born in and raised in Clinton, Volckmann attended military prep school in Minnesota and graduated from the United States Military Academy at West Point.

Volckmann retired as a brigadier general and is buried at Springdale Cemetery in Clinton.

Jesse E. Barwick age 78 of Clinton, passed away Sunday Nov. 29, 2020 at his home. Funeral service to be held Friday 11 AM at the Pape Funeral Home, where further arrangements are pending.