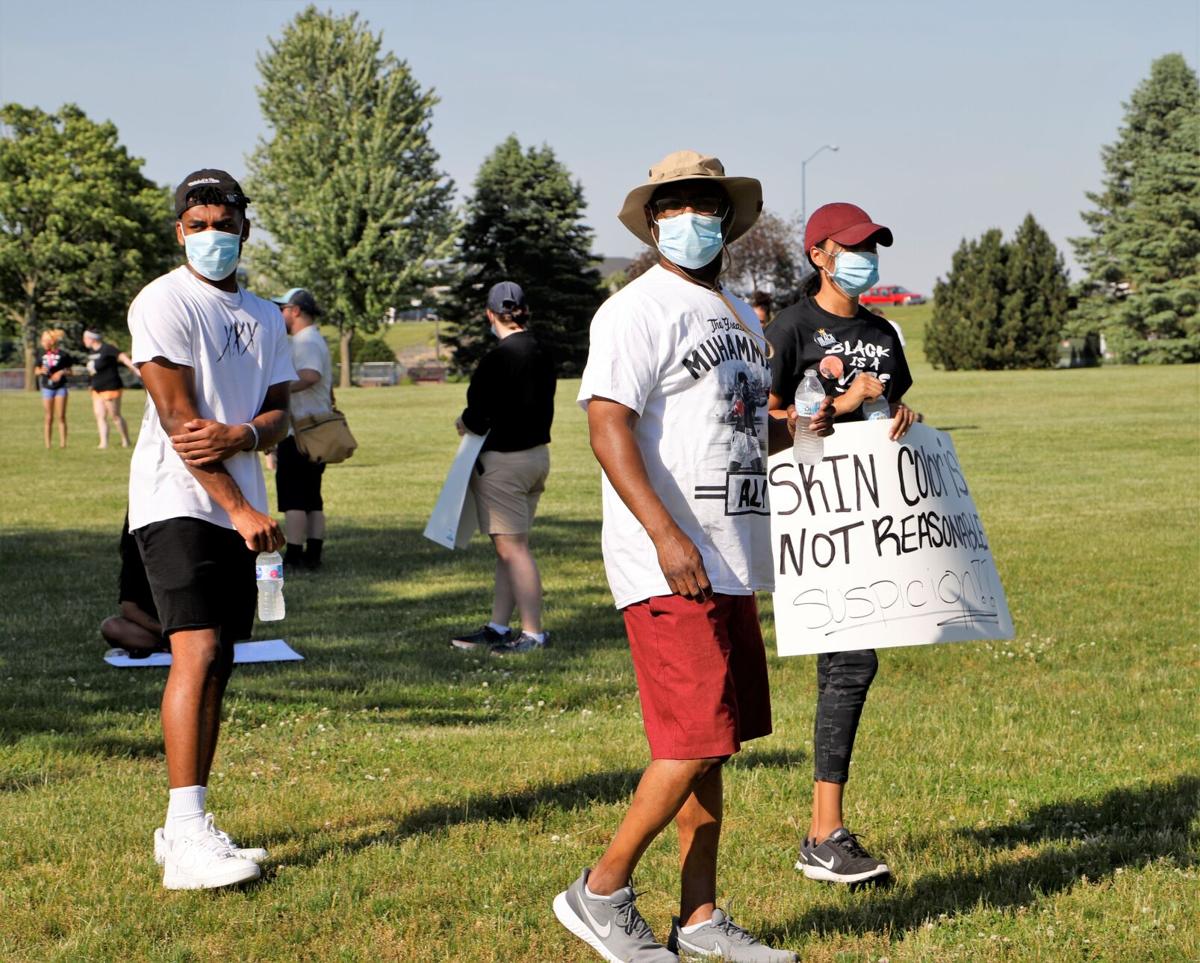 Ty McGruder, Alan Jackson and Ebony Jackson of Clinton join the protest at the Riverview Bandshell in Clinton on Tuesday. 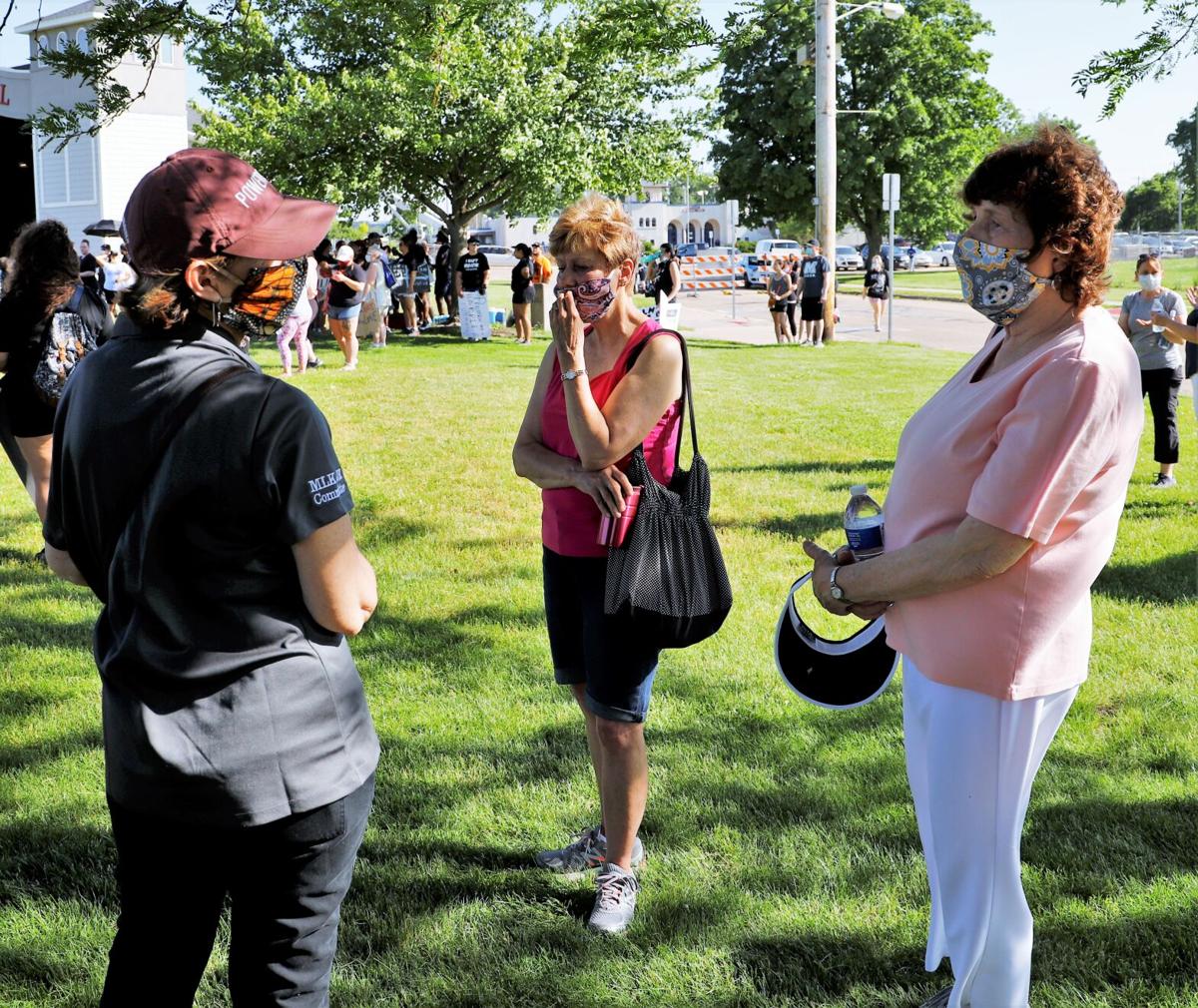 Ty McGruder, Alan Jackson and Ebony Jackson of Clinton join the protest at the Riverview Bandshell in Clinton on Tuesday.

CLINTON — With police brutality and coronavirus on their minds, protesters donned masks and held signs at Clinton’s Riverview Bandshell in 90-degree heat Tuesday in a peaceful protest of last week’s death of George Floyd at the hands of Minneapolis police.

Bearing signs and wearing T-shirts that declared “Black Lives Matter,” “Black is a vibe” and “Skin color is not reasonable suspicion,” protesters stood in the shade, sat in the sun and waited for the start of the march downtown. The crowd of nearly 200 people consisted of blacks, whites and Hispanics standing together to condemn actions that led to Floyd’s May 25 death and to decry racism.

Ebony Jackson of Clinton said the protest brought everyone together, “because it’s more than black versus white.”

“It needs to be us against racism,” Jackson said.

“We’re tired,” said Ty McGruder. “This has happened so many times.”

“We all should be here,” said Judy Doughty of Fulton, Illinois. “And if we all did our jobs 50 years ago, maybe we wouldn’t have to be here today.”

“It’s just, to have watched the video on television, how can you not get out and say, it’s got to change?” said Lindra Bicksler of Clinton. She can’t believe it’s legal to do what police officer Derek Chauvin did to George Floyd, she said. “It’s just not fair.”

Those attending participated in a march that looped from the bandshell and into the downtown area. Tiffany Harris and Todd Monaghan, black community activists, spoke to the crowd, each telling those in attendance they would say things that would make some feel uncomfortable.

Harris said she has lived in Clinton for several decades and never had any issues with the police force. She said if other blacks would stop giving the police reasons to pull them over, then perhaps they would have an experience like hers.

After her speech, some blacks in attendance left the crowd. Harris addressed her comments, saying she did not mean to blame the victims.

“I shouldn’t say it like that,” Harris said. “I just mean, don’t give them a reason to pull you over. And I didn’t mean it with this situation, with Floyd, because that had nothing to do with it. He was complying.”

Monaghan said people come from Chicago because they cannot make it in their city and try to ruin good communities like Clinton. He too said when he would get pulled over by police and questioned, that it was his fault and the officers were doing their jobs.

He said he wants equal rights for everybody and that it is not about “Black Lives Matter,” or “All Lives Matter,” he just want things to be on a level playing field for everyone. The comments struck some people as offensive and some even moaned. Monaghan said though his comments were blunt, he stood by them.

After the speeches, Clinton resident Trajae Lackland said he was disappointed in the comments that the two speakers made. He said they reinforced the stereotypes that all black people are the reasons for their problems. Additionally, he said they used coded language about people from Chicago, which again reinforced what some think of people from that area. Lackland said they had an opportunity to inform the diverse crowd but dropped the ball.

There were some concerns in the days leading up to the protest that it could end up with criminal activity. To prepare for that possibility, Clinton Mayor Scott Maddasion imposed a curfew, beginning Monday night, from 9 p.m. to 5 a.m. until further notice. Businesses boarded up their windows and many closed early or were closed the entire day. City bus service also was suspended Tuesday afternoon by a proclamation that Maddasion issued Monday.

There was a police presence at the march, whose organizers met with police when they were in the planning stages. Assistant Fire Chief Greg Forari and Assistant Chief Jeff Chapman were at the protest, and said they didn’t expect trouble from outsiders at the local event.

Police brutality is wrong, Chapman said. “I think we all understand what’s happening, what needs to change.”