Fear and anxiety spike in virus hot spots across US 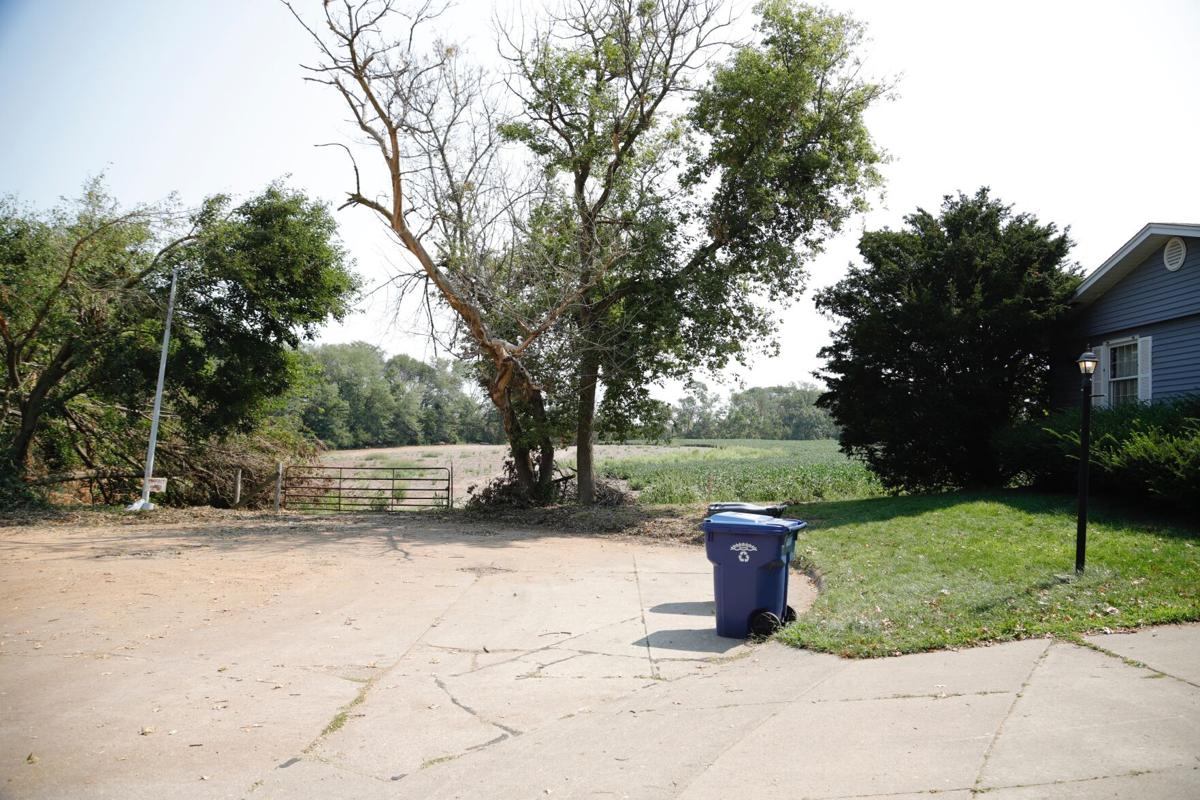 The east end of Ninth Avenue North is gated against traffic from the east. Several Clinton residents have opposed the City’s plan to extend the cul-de-sac through Riverstone Crossing subdivision to the east, linking it to Springdale Drive on the other side. 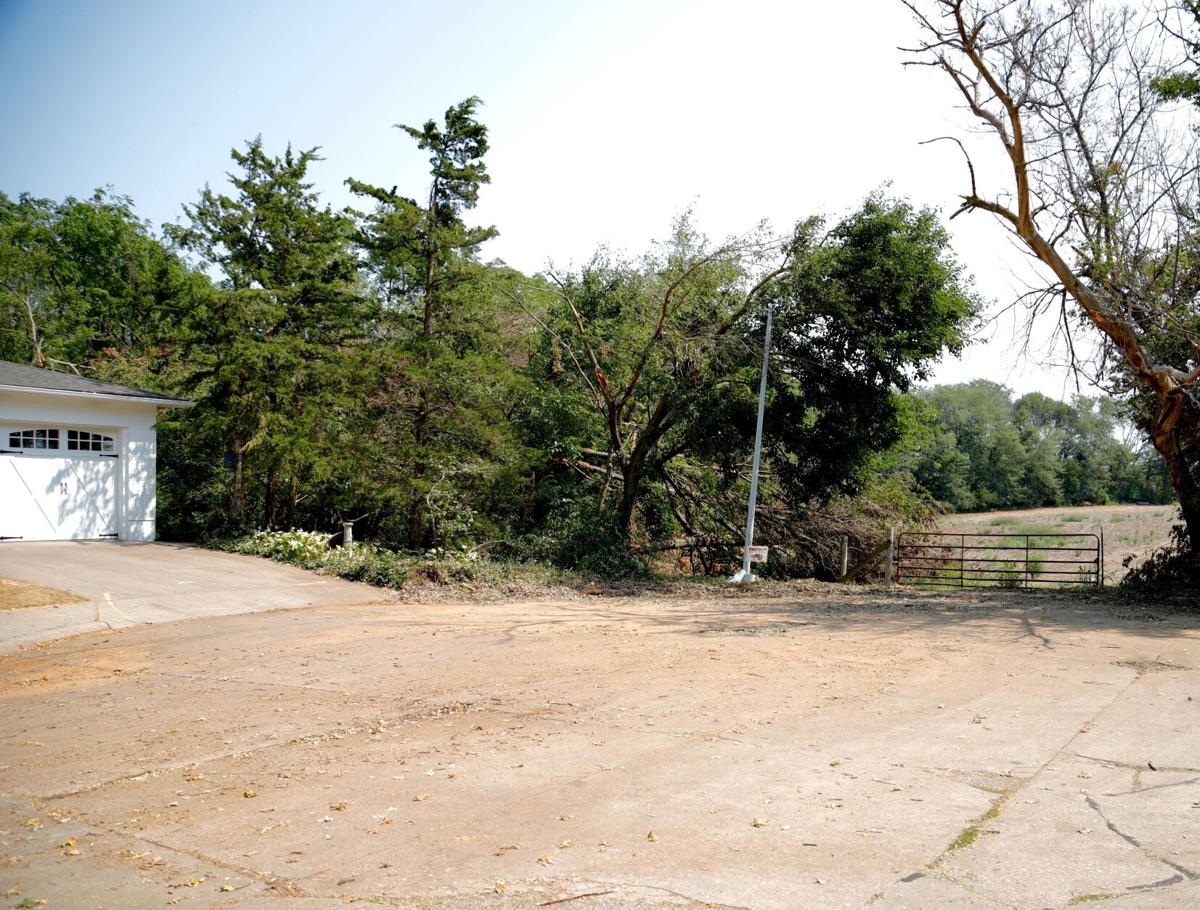 Ninth Avenue North ends at a gate leading to the new Riverstone Crossing Subdivision. During Tuesday's Clinton City Council meeting, Clinton resident Scott Ebensberger of 2509 Cleveland St. disputed the claims of City Administrator Matt Brooke and City Engineer Jason Craft that the street is not a true cul-de-sac and that the city probably always meant for the street to be extended in the future. Winona Whitaker/Clinton Herald

The east end of Ninth Avenue North is gated against traffic from the east. Several Clinton residents have opposed the City’s plan to extend the cul-de-sac through Riverstone Crossing subdivision to the east, linking it to Springdale Drive on the other side.

Ninth Avenue North ends at a gate leading to the new Riverstone Crossing Subdivision. During Tuesday's Clinton City Council meeting, Clinton resident Scott Ebensberger of 2509 Cleveland St. disputed the claims of City Administrator Matt Brooke and City Engineer Jason Craft that the street is not a true cul-de-sac and that the city probably always meant for the street to be extended in the future. Winona Whitaker/Clinton Herald

CLINTON — Two Clinton residents continued to voice their opposition to Riverstone Crossing Subdivision and to turning Ninth Avenue North into a through street during Tuesday’s Clinton City Council meeting.

Scott Ebensberger of 2509 Cleveland St. and Alan Thompson of 823 Springdale Drive have voiced their displeasure with developer Bill Wilford’s proposal and with the City’s actions since July when they asked members of the City’s Plan Commission not to approve the project for consideration by the city council.

The City Council approved the plat for the First Addition last month. Ebensberger and Thompson spoke Tuesday during the public comments portion of the City Council meeting.

“I did my best to remain courteous and listen to opposing sides,” Ebensberger said, and to present information that could be proven factual.

One fact, Ebesnberger said, is that Ninth Avenue North is a cul-de-sac by the State of Iowa definition: a short minor street designed having one end open to motor traffic, the other end being permanently terminated in a vehicular turnaround. 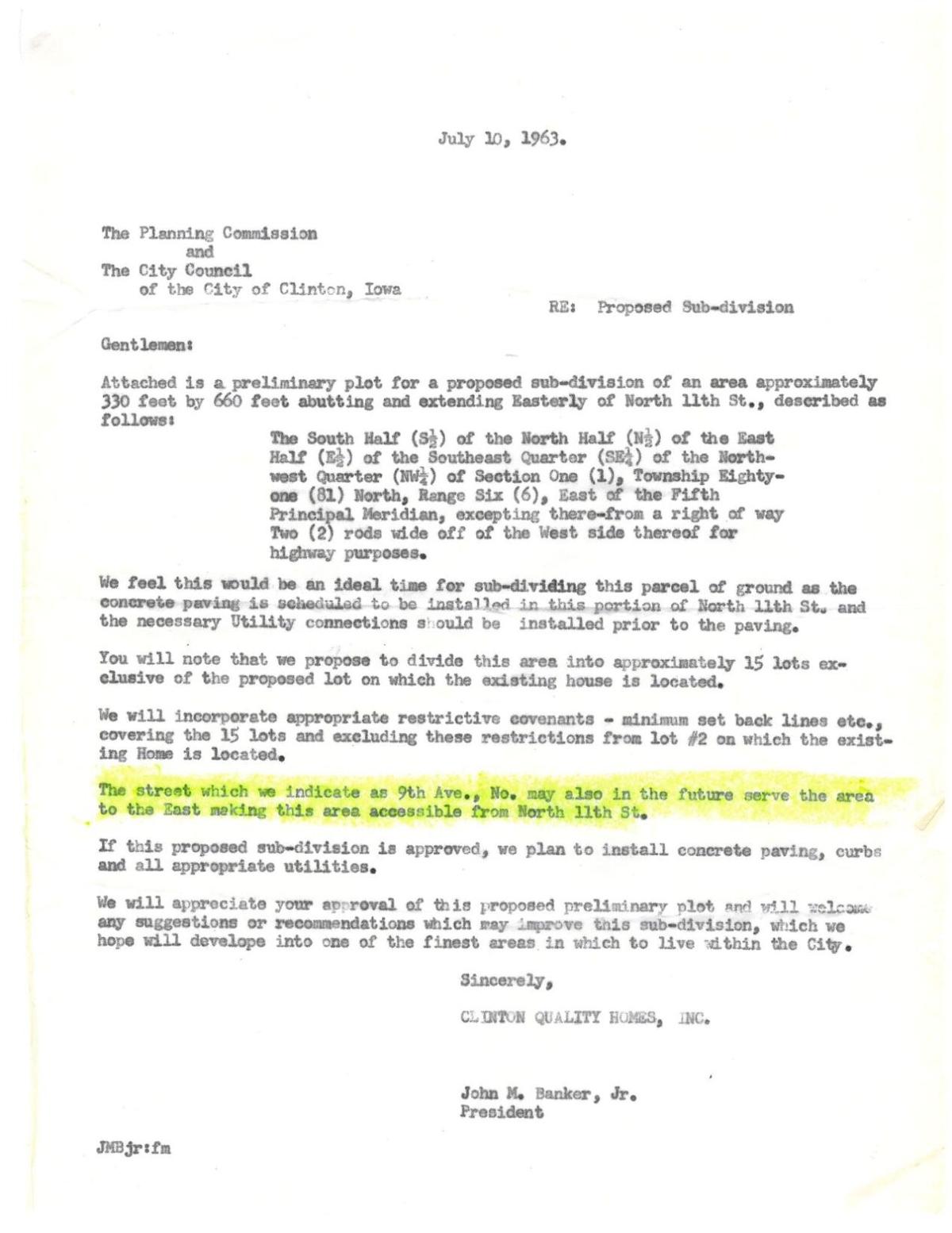 The final plat of Quality Home Subdivision of which Ninth Avenue North is part says, “The street shall be paved to the east property line with a 60-foot diameter cul-de-sac as recommended in the report approving the preliminary plat,” Ebensberger said.

“So I was quite surprised when reading the Clinton Herald on Thursday, Aug. 27 to see the City Administrator quoted as saying that Ninth Avenue North is not a cul-de-sac.”

City Administrator Matte Brooke said in August that the street is not a cul-de-sac in the sense that it ends in a circle, but is a dead end that requires a large vehicle to back up in order to exit.

Ebensberger said Tuesday that his 1994 Ford extended cab 8-foot box pickup truck “can easily turn around in that 60-foot circle at the end of Ninth Avenue cul-de-sac.”

Ebensberger also disputed City Engineer Jason Craft who said at a July meeting with residents that no house was built at the end of Ninth Avenue North and that the city may have always intended to extend the street.

The reason no home was built at the end of the cul-de-sac is because the developer didn’t own that property, Ebensberger said. As for guessing that the city meant to extend the street in the future, “Maybe you should have read the plat,” he said.

Ninth Avenue “may also in the future serve the area to the east, making this area accessible from North 11th Street,” Ebensberger read from the 1963 plat.

“There is no mention of connecting the street to Springdale, only extending the cul-de-sac if they were to acquire the property,” Ebensberger said.

Thompson continued his accusations that the developer’s profits will come on the back of taxpayers. “Granting [tax increment financing] to the development stands in stark opposition to those claiming demand is great for this development but are apparently unwilling to support those claims without obligating taxpayers to assume the risks,” he said.

Brooke said in a meeting with residents and Wilford in July that Wilford will build the road according to the City’s specs, and the City will pay Wilford for the road using tax dollars from the residents of Riverstone Crossing. The street would become the property of the City.

“Granting TIF to this development is actually contrary to the public interest,” said Thompson. “It is no secret that our community has been plagued with continual annual budget deficits.

“Further deficit spending in a high-risk, speculative venture benefiting a very narrow private interest which does not produce a rapid, significant return or at least demonstrate an irrefutable, urgent, brood public interest is inappropriate and irresponsible in government’s representative capacity,” Thompson said.

To whom do your loyalties lie? Thompson asked the council. “With the beleaguered taxpayers upon whom the cost of providing city services to new TIF communities will be shifted, or to a handful of wealthy folks who might move to Clinton if given more readily available housing options but aren’t willing to commit by simply having a custom home built for them in any of the half dozen existing developments eager for their business?”

According to the Iowa Department of Management, tax increment financing is a financing mechanism for Urban Renewal that involves freezing the tax base within a designated area. Property taxes levied against the frozen tax base continues to provide revenue to counties, cities and schools, the Department says.

Property taxes levied by the taxing authorities against the increased property values in the designated area are remitted to the taxing authority that created the TIF in the amount necessary to repay debt incurred to finance improvements made until the TIF ends.

Once the TIF ends, property taxes are apportioned among all taxing authorities.

Among documents approved on the consent agenda was a letter from Jennifer Graf of 2721 N. 12th St. in Clinton. “I am sending you this note in support of the Riverstone Crossing project. Why? Our community does need the higher end market property to attract those purchasers to our community,” the letter says.

Graf said that other projects — the Chancy Fire station improvement and Eagle Heights School — had detractors before they were completed. No one complains today, she said.

“Springdale road was always always intended to be a through street when 19th Avenue was built. When it was connected, neighbors weren’t nearly as upset as when the ‘talk’ was taking place,” Graf said. “And it is now a necessary and valued thoroughfare.”