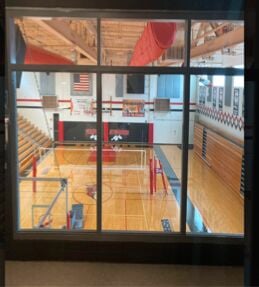 The Fulton High School gymnasium is visible through a window in a suite above. 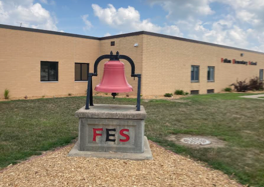 The Fulton High School gymnasium is visible through a window in a suite above.

CLINTON — Multiple upgrades have taken place at schools in the River Bend School District over the past year. The additions include a new boiler and a suite above the high school gymnasium.

The district’s current, original and only boiler at Fulton High School leaked gallons of fluid each day, said Superintendent Darryl Hogue. The old boiler was deconstructed and removed.

Two redundant energy efficient systems will replace the oil boiler. The additions include replacement of ventilator units in many of the rooms and addition of new controls. With the recent work to Fulton High School, all rooms have cooling and heat related modification to the day will not be necessary going forward, said Hogue.

The suite will allow the culinary arts and business students to book, manage, cater and run a mini-business to serve the community and provide a one-of-a-kind of experience.

Fulton High School will be the only high school in the region and maybe the state to offer a fully catered suite experience for high school sports, Hogue said.

“I also look forward to seeing the expression on our opponents’ faces when they walk into games at Fulton High School,” Hogue said.

“The 86-inch interactive board is an alternative to the SMART board that resembles more of a TV,” Hogue said. “Teachers and students are able to write, draw on the board, but this also resembles a TV with its own speakers.”

The district also added cooling to the River Bend Middle School cafeteria, Hogue said. Through the use of grants and local funds, Boonstra Heating and Cooling was able to provide a new rooftop heating system that added cooling, according to Hogue.