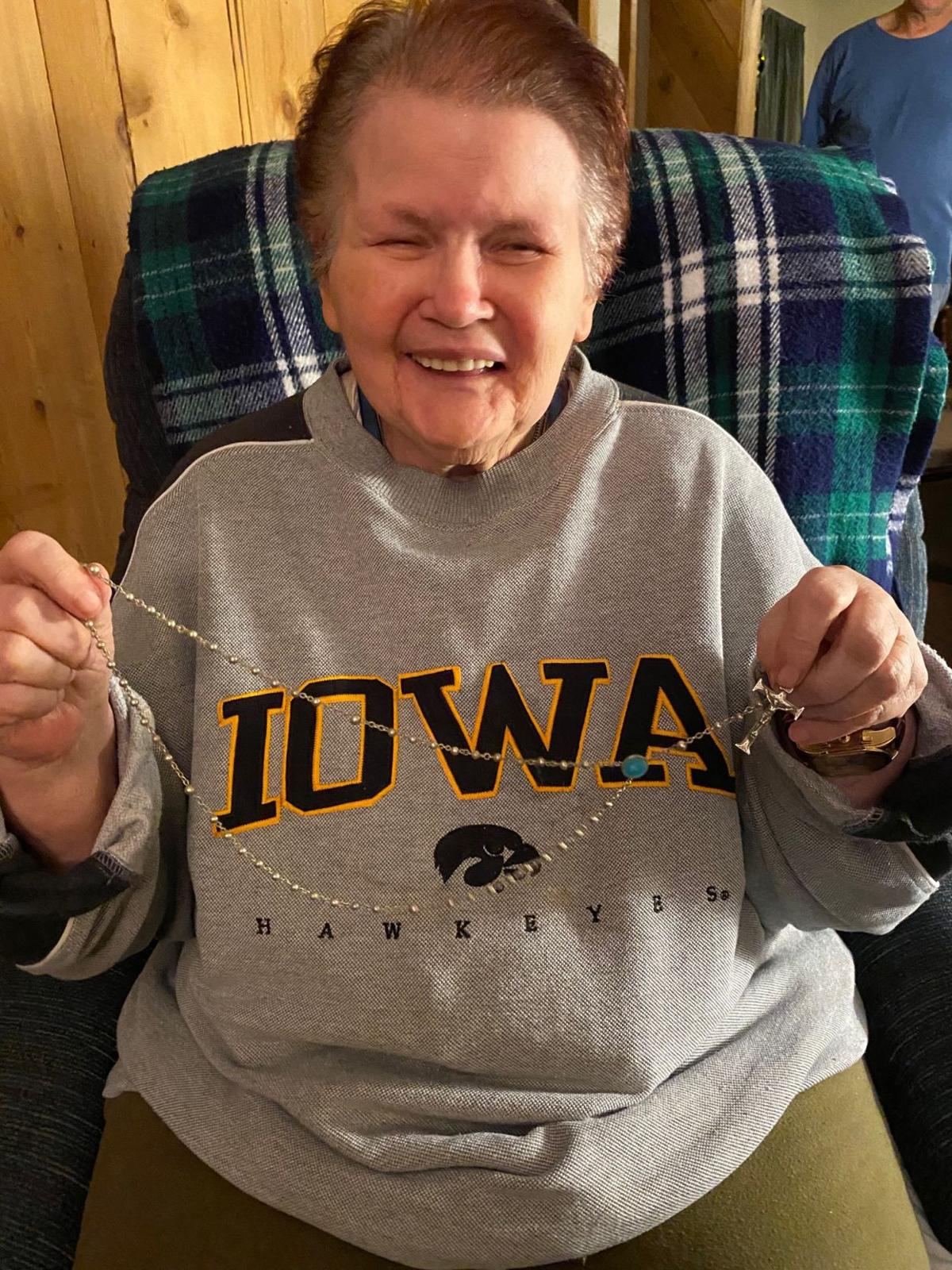 Diana Borja of Clinton holds the rosary she lost 72 years ago in New Jersey. A retired postal worker in New Jersey found the beads and returned them to Borja this month. Submitted photo 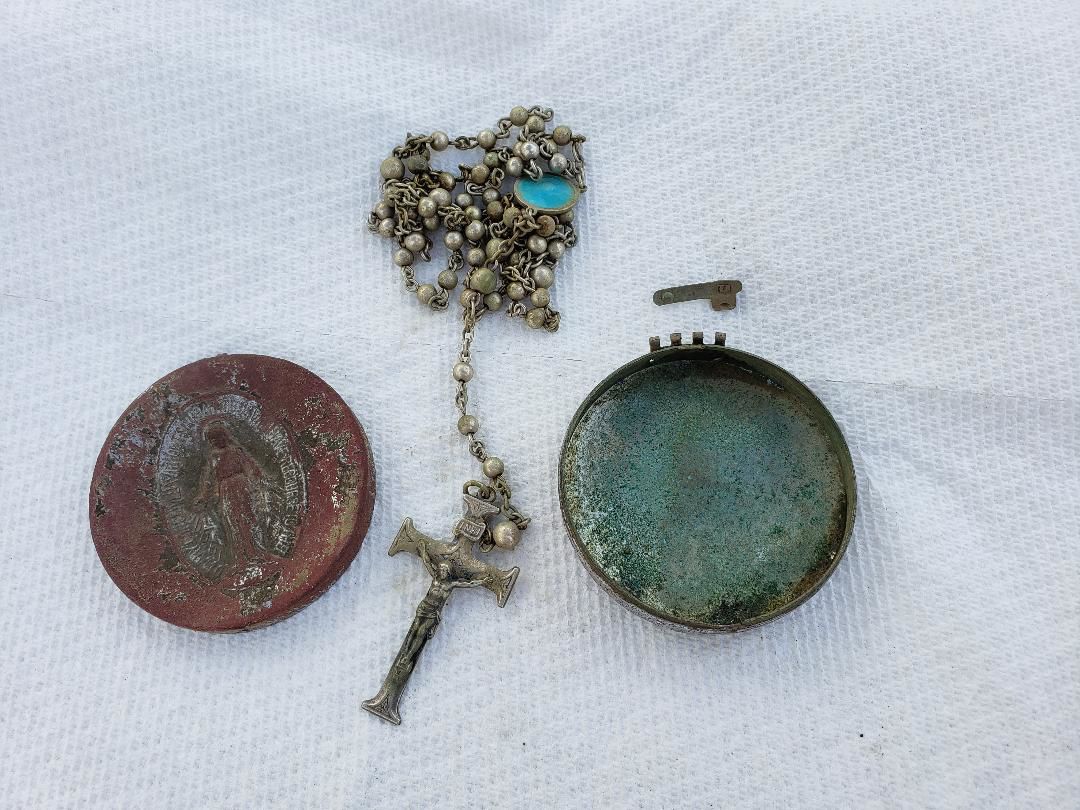 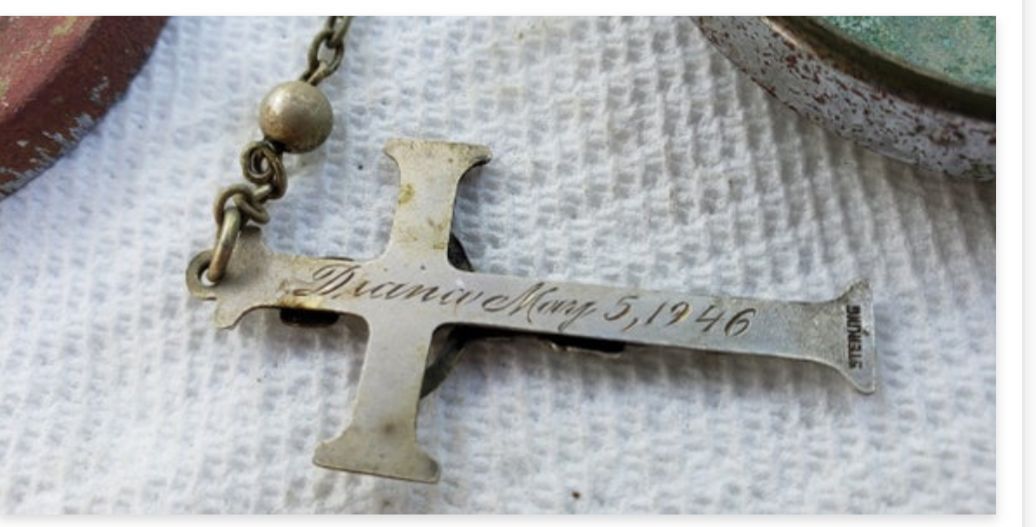 The name and date on this rosary helped Daniel Jurgens track down its owner more than 70 years later. The beads were returned to Diana Borja in Clinton this week after a two-week search on the internet and social media. Submitted photo 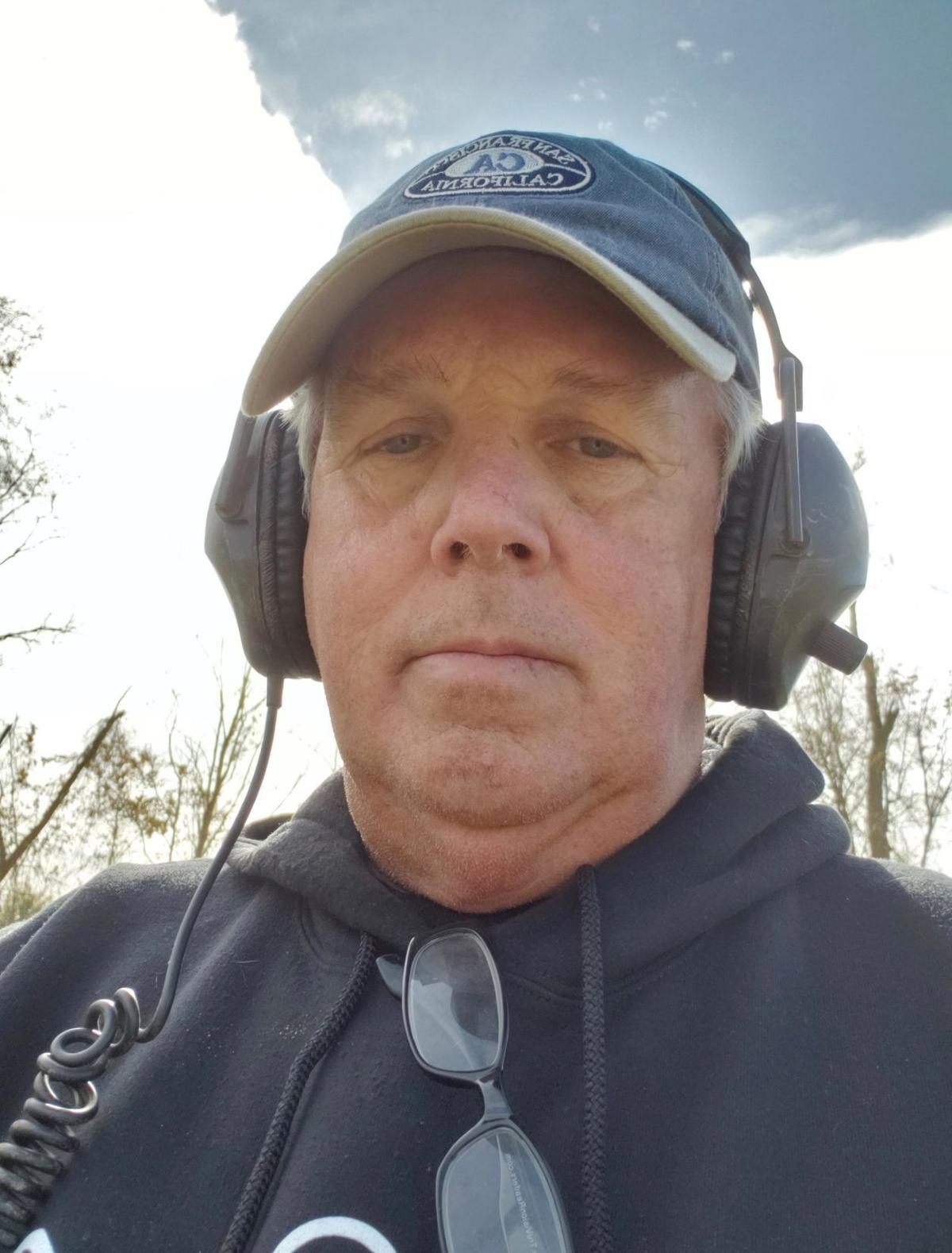 Daniel Jurgens of Woodbridge, New Jersey is a metal detector hobbyist. This month, Jurgens returned a rosary he found to the Clinton woman who lost it as a child more than 70 years ago. Submitted photo

Diana Borja of Clinton holds the rosary she lost 72 years ago in New Jersey. A retired postal worker in New Jersey found the beads and returned them to Borja this month. Submitted photo

The name and date on this rosary helped Daniel Jurgens track down its owner more than 70 years later. The beads were returned to Diana Borja in Clinton this week after a two-week search on the internet and social media. Submitted photo

Daniel Jurgens of Woodbridge, New Jersey is a metal detector hobbyist. This month, Jurgens returned a rosary he found to the Clinton woman who lost it as a child more than 70 years ago. Submitted photo

CLINTON — New Jersey resident Daniel Jurgens was happy to get out with his metal detector this month after staying home for weeks by order of Gov. Phil Murphy.

But Jurgens didn’t realize his release from quarantine would introduce him to a little Catholic girl who grew up, married a doctor and raised a family in Clinton.

“We’ve been stuck in here in New Jersey because of the coronavirus,” Jurgens said from his East Coast home Tuesday. Released from Murphy’s mandated quarantine, the retired postal worker went to a large open space about 5 miles from his home May 14 to resume his hobby — metal detecting.

Alone in the field, Jurgens swept the area and found a Brownie ring and a 1943 mercury dime. Later that day, he returned and picked up a couple of pennies.

Clouds moved in. “It looked like rain,” said Jurgens. He reached a group of trees before it started to hail.

“Well, there must be a reason that I’m here. Someone must be directing me here,” Jurgens thought.

“[Then] I got a nice hit on my metal detector.”

About 9 inches deep in the ground, Jurgens found a small, round, compact metal container with the likeness of the Virgin Mary engraved on it. Jurgens took the treasure back to his car to see what was in the ornate case.

Jurgens been in this situation before. He once found a safe deposit box about a foot underground. His mind raced as he imagined money or jewels, but the box was empty.

The container adorned with the Virgin’s image was not. “I open this thing up carefully, and inside, is a rosary.”

Jurgens took a magnifying glass from his pocket and checked the inscription: “Diana, May 5, 1946.”

Jurgens always wonders if his finds are real silver or real gold, he said. That day he also wondered if he could find Diana and return the beads to her.

“So, I go home, and I clean it off a little bit better. ... I know that there’s a Catholic church about three blocks from this park, and I call up the Catholic church, and I speak with the secretary.”

The secretary agreed to check church records for the name and date. Meanwhile, Jurgens began his own research on the internet. How old would a little girl be for her first communion?

Three days later, the secretary at Our Lady of Peace Church had a name for Jurgens: Diana Antonides of Fords, New Jersey received her first communion May 5, 1946.

With a last name to go with the first, Jurgens checked Ancestry.com and found a 1940 Census record for a 1-year-old Diana Antonides.

“So I look for the address on the side of the Census. I look it up on MapQuest or Google Maps. The home she lived in was about three blocks from this park,” Jurgens said. He decided he had the right person.

Jurgens learned that Antonides married Salvador Borja in 1958. He found Borja’s obituary. The medical doctor from Clinton died in December 2017 at the age of 86.

Borja was born in 1931 in San Juan La Union, Philippines, the son of Wenceslao and Angela Rivera Borja, his obituary says. He was a 1956 graduate of the University of Santo Tomas Philippines and married Diana Antonides in 1958 in Fords, New Jersey.

Borja came to the United States for his internships and residencies. He practiced medicine in Sterling, Illinois from 1965 to 1973 and in Clinton from 1973 until his retirement in 2001, serving as Director of Laboratory Medicine and the Clinton County Medical Examiner.

Borja’s obituary listed his wife Diana and several children and grandchildren as survivors.

Jurgens wondered if Diana was still alive. The doctor’s obituary was less then 3 years old, and Diana would be in her 80s. “She could very well be alive.”

Jurgens began searching for the children, and he emailed the funeral home that handled Borja’s services. About two days later he received a call from Diana’s daughter Kathy.

“He was trying to call me, and he was leaving messages,” Diana’s son, Kris Borja, said Tuesday. Kris doesn’t answer calls from numbers he’s not familiar with, and he wasn’t attentive to Jurgens’ voicemail.

Kris let his sister Kathy deal with the call.

“I left that decision about veracity to her,” Kris said. “But she was interested.”

“At first they were a little leery,” said Jurgens. He could have been a scam artist.

But the information matched family history, and the children consulted their mother about Jurgens’ find.

That a man in New Jersey was trying to return his mother’s childhood rosary after 70 years was not what most awed Kris. The story hit Facebook and went around the country.

“Someone on Facebook got hold of my brother in Houston,” Kris said.

Diana declined to be interviewed, but Kris said she eventually recalled losing the rosary. Diana’s grandparents lived close to the park where the rosary was found, said Kris. A boy about Diana’s age (she thinks his name was Ritchie) had a habit of taking her stuff.

A year or two after that first communion, Diana had a confrontation with the boy when he took her rosary. He might have buried it to hide it from her. “That’s how she thinks it happened,” Kris said.

The rosary arrived in the mail this week. It was a first communion gift given to her by her godmother or her aunt. “I think she probably just thought she’d never see it again,” Kris said.

“I’ve been trying to get hold of her cousin whose mother was her godmother. She’ll find this really interesting too.

“It’s been a cool story,” Kris said. “I just can’t get over the Facebook part of this. That it went so fast. I would never have thought of how to find somebody like that.”

Jurgens agreed that the search was over quickly. “It took me, like 6 days to pin it down,” he said.

Last year, about the same time of year, Jurgens met his daughter’s neighbor and asked if he could hunt metal in her yard. The woman mentioned that she’d lost a ring that had been given to her as a communion gift.

Jurgens found three rings in three days. One was the gold Irish Claddagh ring that the woman received from her godmother for communion.