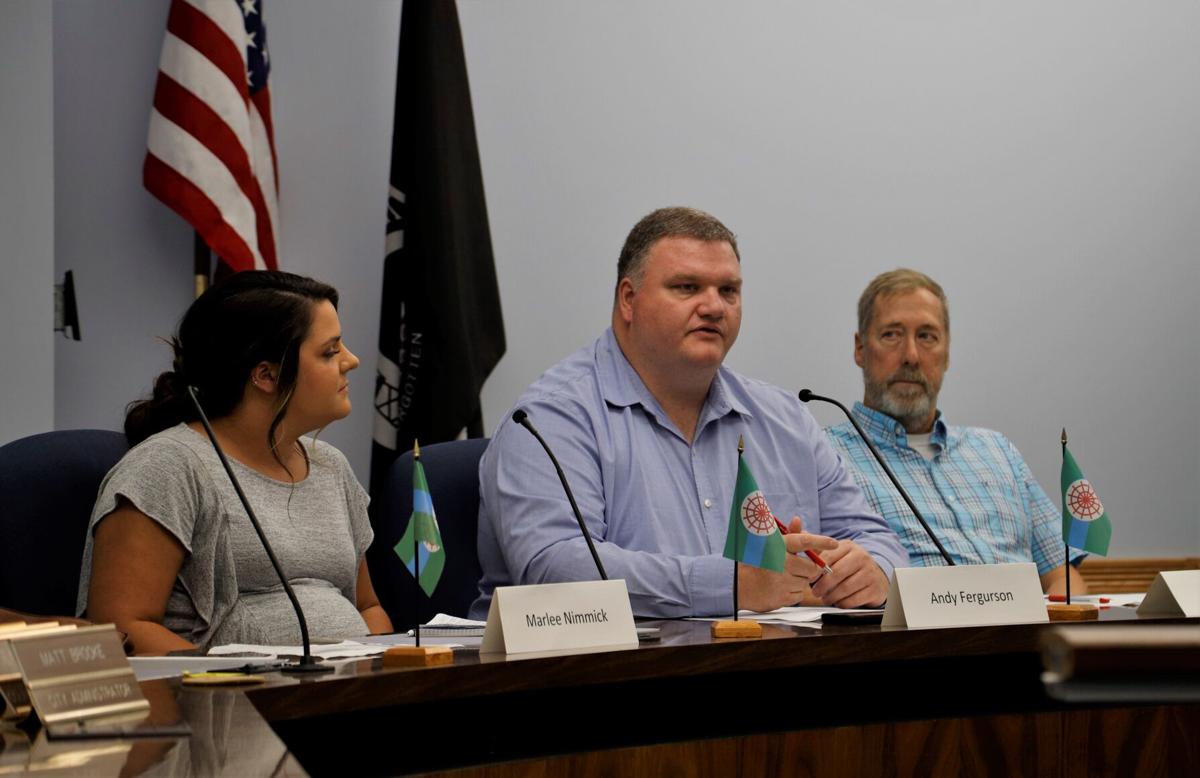 Marlee Nimmick and Ken Clarke listen as Andy Fergurson answers a question during a forum of Clinton School Board candidates Thursday. 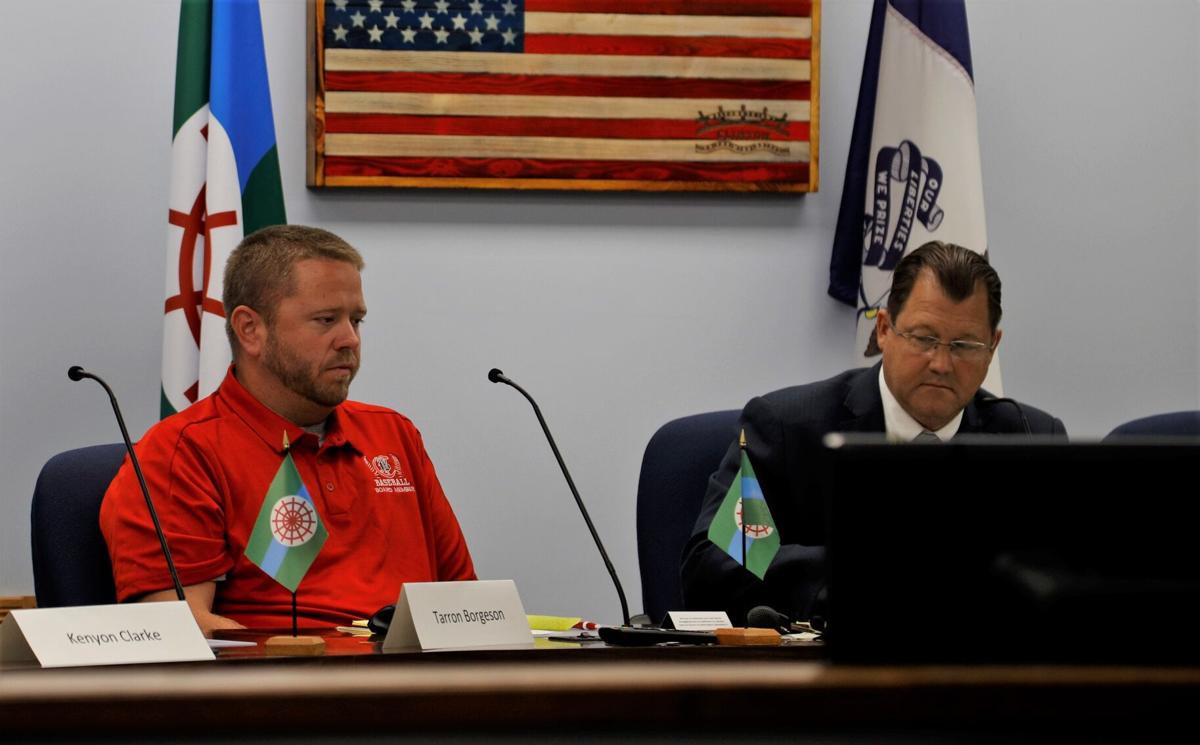 Clinton School Board candidate Tarron Borgeson, left, answers a question from moderator David Pillers during a forum conducted by the Clinton Area Chamber of Commerce on Thursday.

Marlee Nimmick and Ken Clarke listen as Andy Fergurson answers a question during a forum of Clinton School Board candidates Thursday.

Clinton School Board candidate Tarron Borgeson, left, answers a question from moderator David Pillers during a forum conducted by the Clinton Area Chamber of Commerce on Thursday.

CLINTON — Four of six Clinton school board candidates agreed during a forum Thursday that masks and vaccines should not be mandated at schools.

Marlee Nimmick, Andy Fergurson, Ken Clarke and Tarron Borgeson also agreed that the district shouldn’t teach sexual orientation and gender identity and that parents should have a say in school curriculum.

Candidates Ann Reed and Jennifer Austin did not participate in the forum due to previous commitments.

The issues that moderator David Pillers questioned candidates about included many that have divided communities across the country, such as mask and vaccine mandates.

“I support the decision that the school board has already made on the mask mandate,” said Borgeson. The board voted last month not to require masks at district schools.

The decision should be up to the parents, said Borgeson.

“I’m so glad that the school board here in town did vote to keep those masks off those kids,” said Clarke.

“I agree with Mr. Borgeson and Mr. Clarke,” said Fergurson. “I think that the school board did a great job. They had a very difficult task. They made a hard decision. They considered both sides.

“I’m pleased with the decision that they made,” Fergurson said. “I am somebody who is definitely pro-liberty, pro-choice. I want the parents and the kids to have the choice.

“At the same time, I understand ... it’s a difficult position to be in,” Fergurson said. He teaches his own children to consider the pros and cons, what they will gain and what they are giving up, he said. He also teaches them to respect the rights of other people and not to bully children who wear masks.

“As a health care provider, I can say that I spoke at the mask meeting, and it can be hard to go against the grain of the health care initiative, but I agree that it should not be mandated,” said Nimmick, a registered nurse.

“The other concern is, our children have robust, wonderful immune systems, and so, when we are masking them, we are hindering those immune systems to fight those things off,” Nimmick said.

Parents have told Nimmick that it was great that their children had hardly any colds or sniffles and gastrointestinal illness while wearing masks. “But the thing is, with children, that if you do not have unhealthy children, you have very unhealthy adults,” Nimmick said.

“Kids, because they have that robust immune system, it is good for them to be exposed to germs and bacteria, and that is what their bodies are made to do, is fight that off,” Nimmick said.

Pillers asked candidates about the role of the school board, the role of parents and to what extent parents should have a say in the curriculum or resources of schools.

“From a parents’ perspective, I feel like the role of the school board is ... to be a voice for the stakeholders that are involved in the school,” said Fergurson. “So that’s the neighborhood, that’s the kids, that’s the parents, that’s the community.”

The board should listen to the concerns of the stakeholders and offer the best solution, Fergurson said.

“I think parents should be very involved,” said Fergurson, not so much in making policy but in making sure their opinions are known. Parents should know what is being taught at different levels in the school, but the school board should have the final say as to what is best for the community as a whole.

“We are here to represent the parents and the children,” said Nimmick, both the majority or the minority.

“I have always appreciated the option of opting in or opting out of certain education, said Nimmick. Education should be more pertinent to children’s age groups, she said.

A school board should make sure that educators have the tools for success, said Borgeson. “When it comes to curriculum involvement, yeah, I agree, a parent should have some say. But you need to be careful because if you start getting too many hands in the pot, it automatically gets watered down quite a bit.”

“There are probably a lot of things that go on in the school system that the parents don’t know anything about. And it’s unfortunate, really,” said Clarke.

“I think it’s important that the parents are completely aware of what their children are being taught on every level,” said Clarke. “It’s kind of a funny thing to me that the school system doesn’t make it apparent to them.”

Clarke said he assumes Clinton doesn’t have the problem but that, nationwide, educators have the attitude that they own the children and that parents shouldn’t be involved at all.

It’s essential that parents know what their children are being taught, said Clarke. Schools could eliminate things that don’t mean much, stick to the basics and let children be innocent, he said.

Concerning sexual orientation and gender identity, Clarke said, “I think the school system in general has no business doing anything in that area, and I firmly believe that if the children don’t learn it at home, it shouldn’t be required that the school system teach them about things that are family oriented.”

Schools are not responsible to teach children how to identify, said Fergurson. “I think the school’s responsibility is to protect individuals,” he said. Schools should make sure that children’s rights aren’t infringed upon because they are in the minority.

But schools are not responsible to indoctrinate, Fergurson said. A teacher’s responsibility is to teach children how to think, not what to think.

“That’s a big distinction,” said Fergurson. “I think in our society we tend to think that we should take these children while they’re impressionable and give them the right impression.... That is bad logic,” he said.

“Our job is to give them the information so that they can make decisions,” Fergurson said. that information should come from many sources, he said. From home, from church and community, from neighborhoods, brothers and sisters, cousins and friends.

“It should not only come from the schools,” Fergurson said.

“I feel like sexual orientation and gender identification being taught in schools is a really slippery slope,” said Nimmick. “Especially at a young age.”

Schools are “weighing on the side of grooming more than educating,” said Nimmick

“I think having education on sexual orientation is not something that should be done within the school system,” Nimmick said. The district should support children who have questions or feel differently and provide counseling for them and their families if they need that support.

“But I don’t think that the schools should be teaching beyond male and female of gender identification and sexual orientation,” Nimmick said.

“We all have a lot of the same ideas,” said Borgeson. “And I agree with them. .... It’s something I don’t think that should be taught in the school system.”

The school should have counseling available for students that do have questions and want to speak to someone about it, Borgeson said.

{child_flags:featured}{child_flags:ap}Judge continues to prohibit Iowa enforcement of mask b…