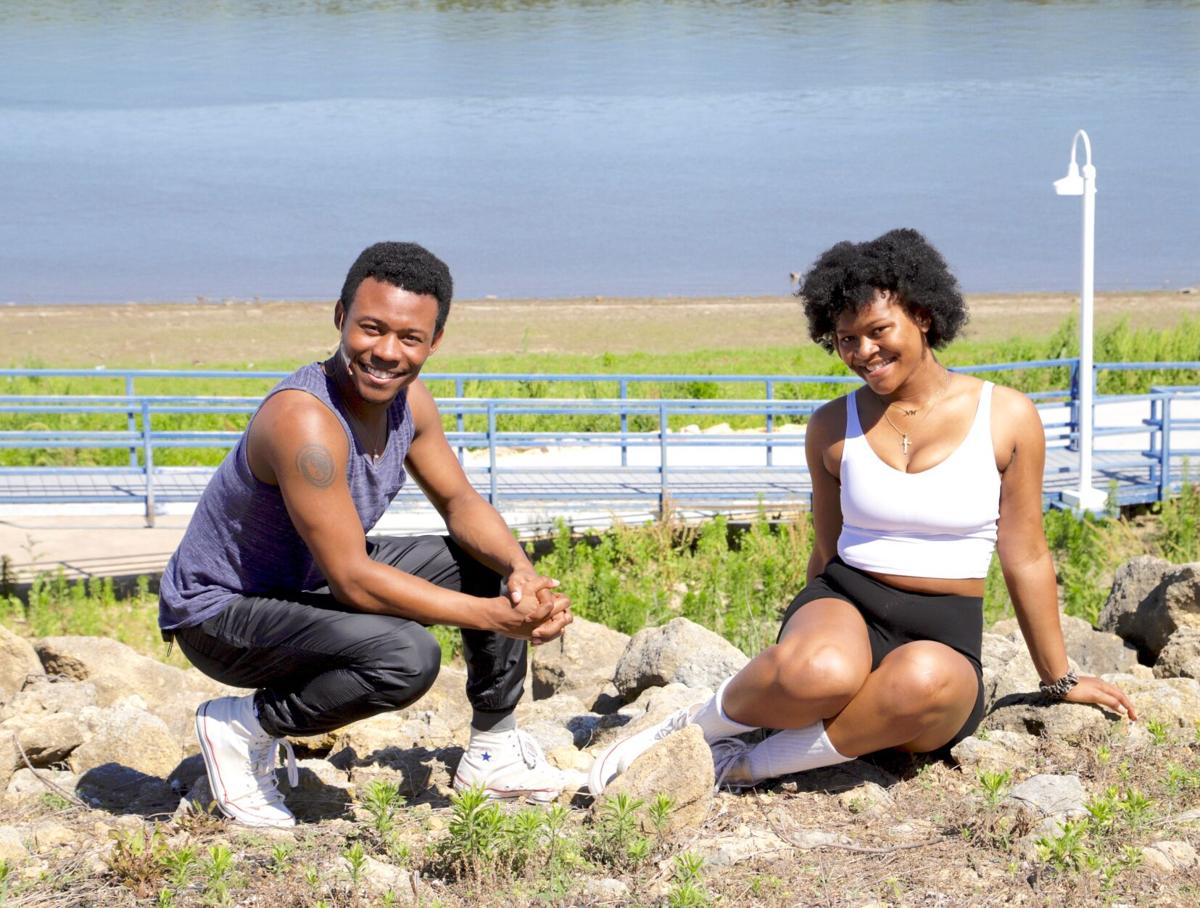 Melvin Gray Jr. and Kris Lyons and seven other newcomers star in Smokey Joe’s Cafe for the Clinton Area Showboat Theatre. The show opened Thursday at Clinton’s Riverview Bandshell and will continue through June 27. 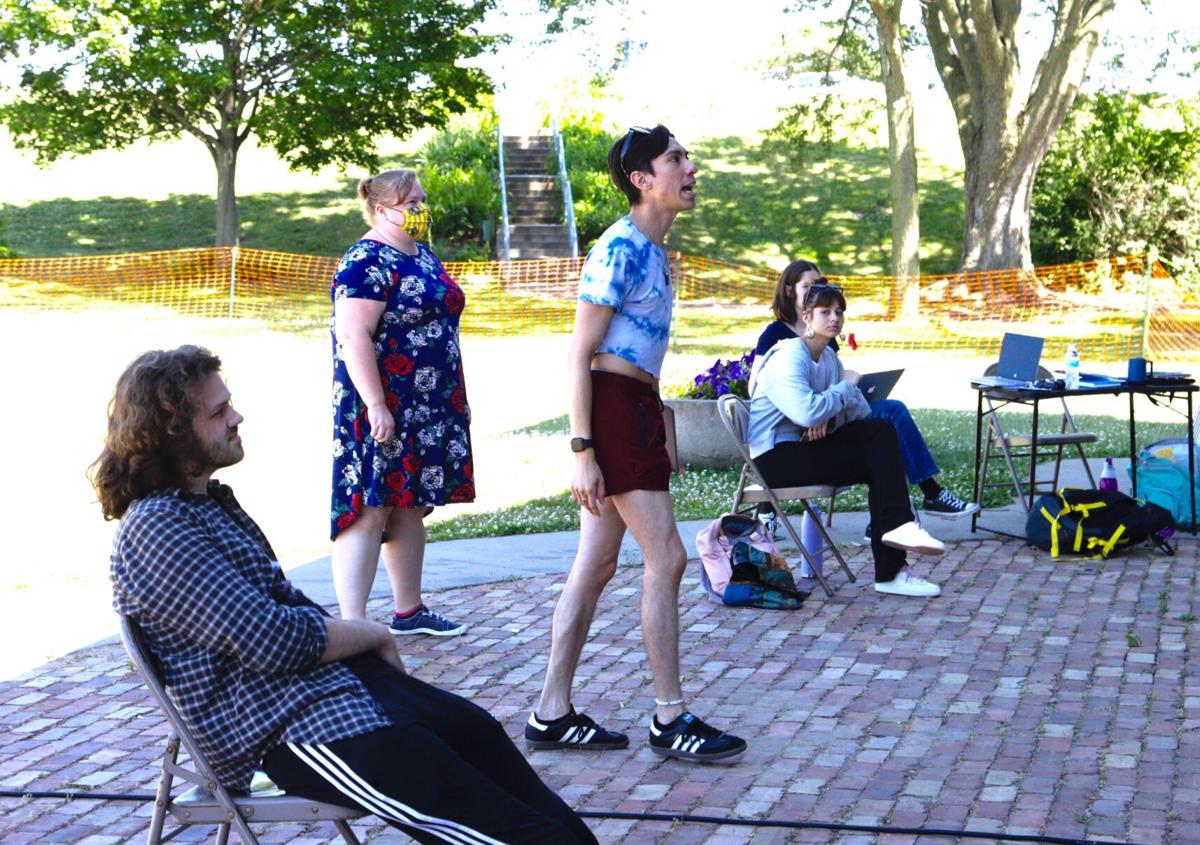 Melvin Gray Jr. and Kris Lyons and seven other newcomers star in Smokey Joe’s Cafe for the Clinton Area Showboat Theatre. The show opened Thursday at Clinton’s Riverview Bandshell and will continue through June 27.

Though the actors grew up very differently, they both found their way to the Clinton Area Showboat Theatre.

A student of Baldwin Wallace University in Berea, Ohio, Lyons submitted a lot of audition tapes for summer stock. “I’m very lucky to be ending up here,” she said Wednesday.

Lyons grew up participating in theater and sports such as lacrosse, she said during a break in rehearsal for “Smokey Joe’s Cafe” at Clinton’s Riverview Bandshell. During high school, Lyons became involved in community theater, performing in her first summer stock between her junior and senior years of high school.

Lyons has performed in such roles as Mary Poppins, Mayzie La Bird in “Seussical” and Medda Larkin in “Newsies.”

“I really do love small theaters,” Lyons said. She likes seeing people’s faces and their reactions to the performance.

“I really like Clinton because it feels like I’m performing for the whole community,” said Lyons. “They are so excited to have people here.”

While Lyons won’t perform on the stage in the riverboat during “Smokey Joe’s” run, she’s excited with the outdoor theater experience. The Bandshell is a beautiful stage, and Clinton is seeing beautiful days.

The sun was bright in Wednesday’s cloudless sky, and temperatures held in the mid-80s. Just over the hill from the stage, the Mississippi River flowed bright blue.

“The view is amazing from work,” said Lyons.

Lyons will be a sophomore this fall. She’ll be looking for agents, working on her senior showcase and plans to move to New York and “follow the dream.”

Lyons can be seen in the Showboat’s third show, “All Shook Up,” next month.

That show and the final two shows of the season will return to the Showboat’s indoor stage due to the lifting of more COVID restrictions by Actors’ Equity Association, the union that controls many aspects of the Showboat shows, Producing Artistic Director James Beaudry said Wednesday.

Gray was late to the game when it comes to musical theater. He grew up in Henderson, North Carolina and planned to be a pediatrician. Gray took classes that are prerequisite for a medical career and completed a high school residency.

Gray played baseball and basketball while in high school, but he decided to try something different in college.

Gray attended William Peace University, a private college in Raleigh. The school was formerly an all-girl school. Gray entered the college in the first co-ed class in the fall of 2012. He graduated in 2016.

A friend knew Gray could sing and encouraged him to audition for “The Mystery of Edwin Drood,” a musical based on the unfinished Charles Dickens novel.

Gray had never done theater, so the summer before the audition he watched footage of the show, he said. He was cast as Deputy Master Nick Cricker.

“I just kind of got bit by the bug,” Gray said. He switched his major from biology to theater, and he jumped in with both feet, tackling acting, singing and dancing with no previous experience other than dancing to Janet Jackson albums at home.

“When I switched to acting, I just jumped into everything,” said Gray.

Lyons, by contrast, took dance lessons as a child and started private lessons in ballet, jazz and tap in high school. She continues to study dance at Baldwin.

Both Lyons and Gray have parents who support their career choice, they said.

Gray’s parents were a little doubtful when their would-be doctor son wanted to switch to a more uncertain career, he said, but after seeing Gray perform, they understood why their son made the change.

Their only caveat was that Gray had to put in the work. “If you’re going to do it, do it,” they told him.

Gray’s first job was with Bare Theatre, which usually performs Shakespeare, he said. But this production was a series of 10-minute historical monologues performed in front of tourists at an actual plantation house. Gray, who is African-American, portrayed the son of a slave.

“I remember I walked out and said my first line and blanked out,” Gray said. The moment lasted only a few seconds, but it felt like forever, Gray said. He took a breath, found the words and finished the speech.

Gray isn’t new to outdoor theater, but this is his first stint at the Showboat. Clinton reminds Gray of Sanford, North Carolina, he said. It has a small-town energy and welcomes the Showboat actors with open arms.

Gray plays Adrian in “Smokey Joe’s Cafe,” a role he performed once before, in 2017, he said. When Gray heard through Actors’ Equity that the Showboat was casting the show, he sent an audition video.

“I love the show. I love the music,” Gray said. “It’s so much fun doing this show again.”

Sometimes during practice at the bandshell, Gray’s body remembers the choreography from the 2017 show and he has to remind himself that the footwork is different this summer.

“My brain has had to recalibrate,” said Gray.

“Smokey Joe’s Cafe,” set in the 1950s, presents the songs of Jerry Leiber and Mike Stoller. The musical ran for 2,036 performances on Broadway and became the longest-running musical revue in history.

Ben Cherington and Alexa Lopez round out the cast, Kory Danielson serves as music director and Heather Bennett is the production’s stage manager, according to Clinton Area Showboat Theatre.