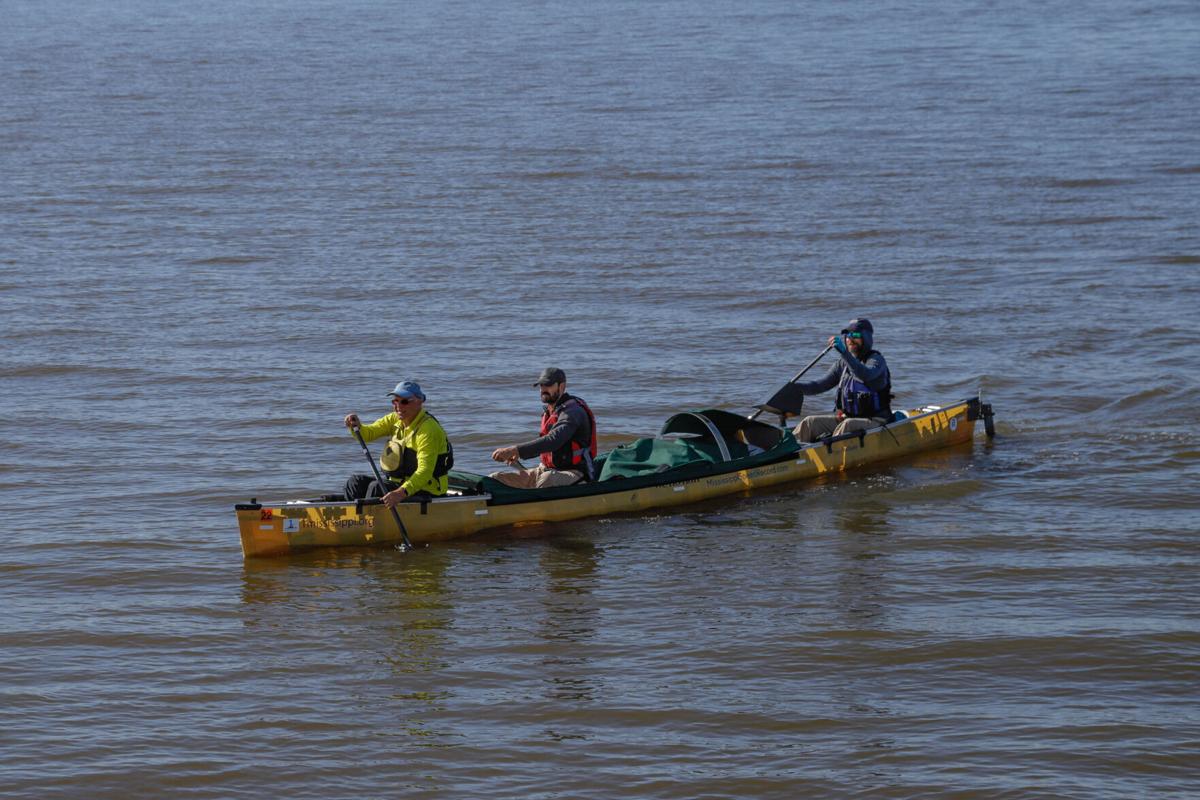 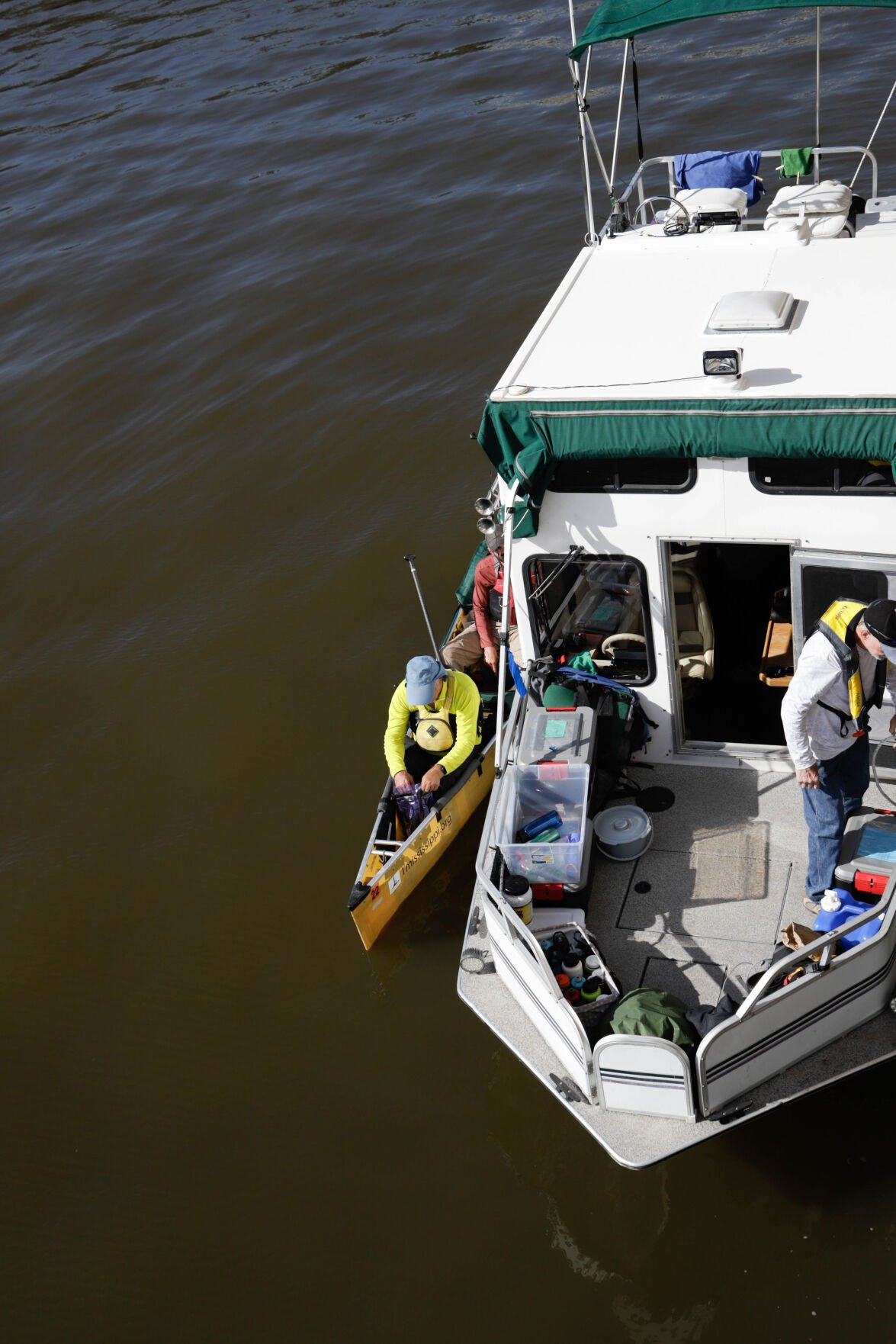 Perry Whitaker, in the front of the canoe, interacts with Mississippi Speed Record's support boat Tuesday in the lock at Lock and Dam 13 near Fulton, Ill. Winona Whitaker/Clinton Herald 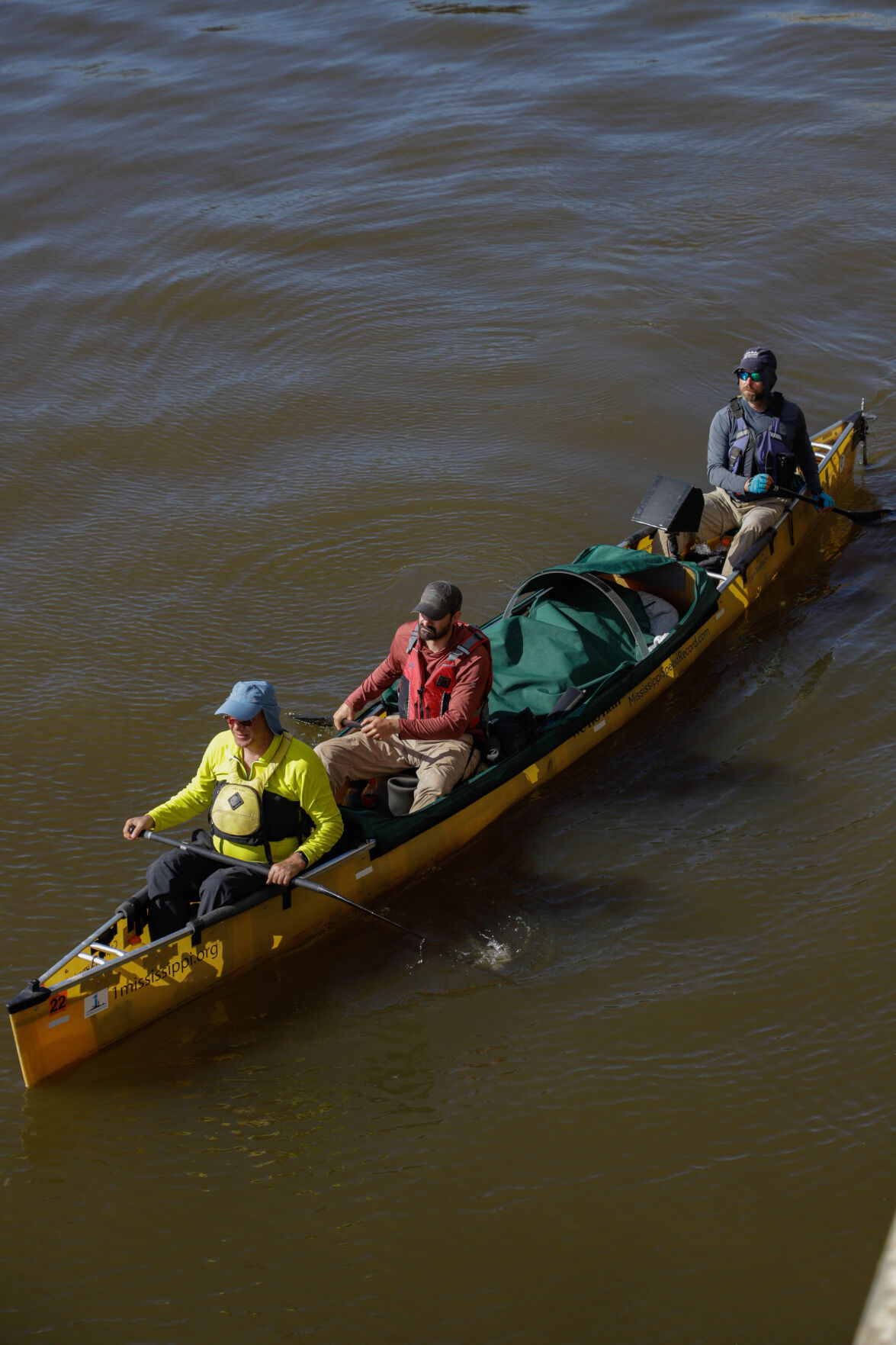 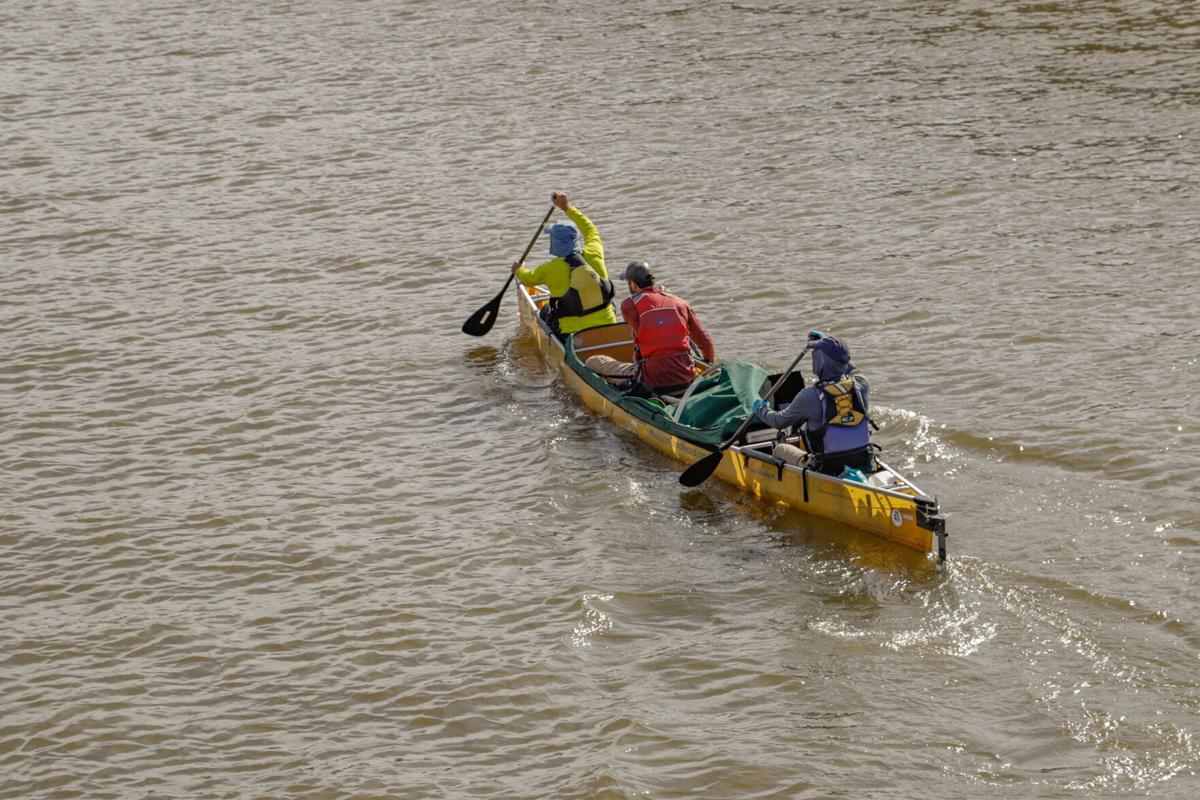 The Mississippi Speed Record canoe team leaves Lock and Dam 13 Tuesday in its world record attempt. The team was about five hours off the pace Wednesday morning. Winona Whitaker/Clinton Herald 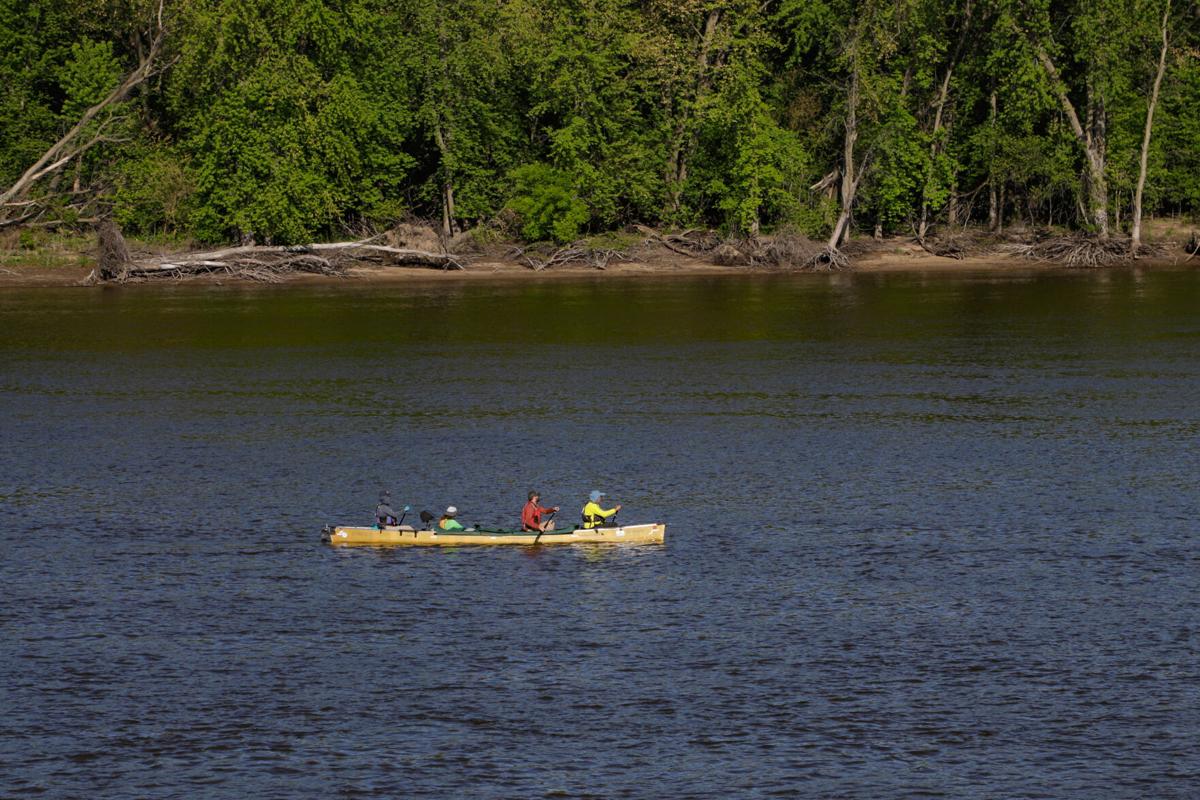 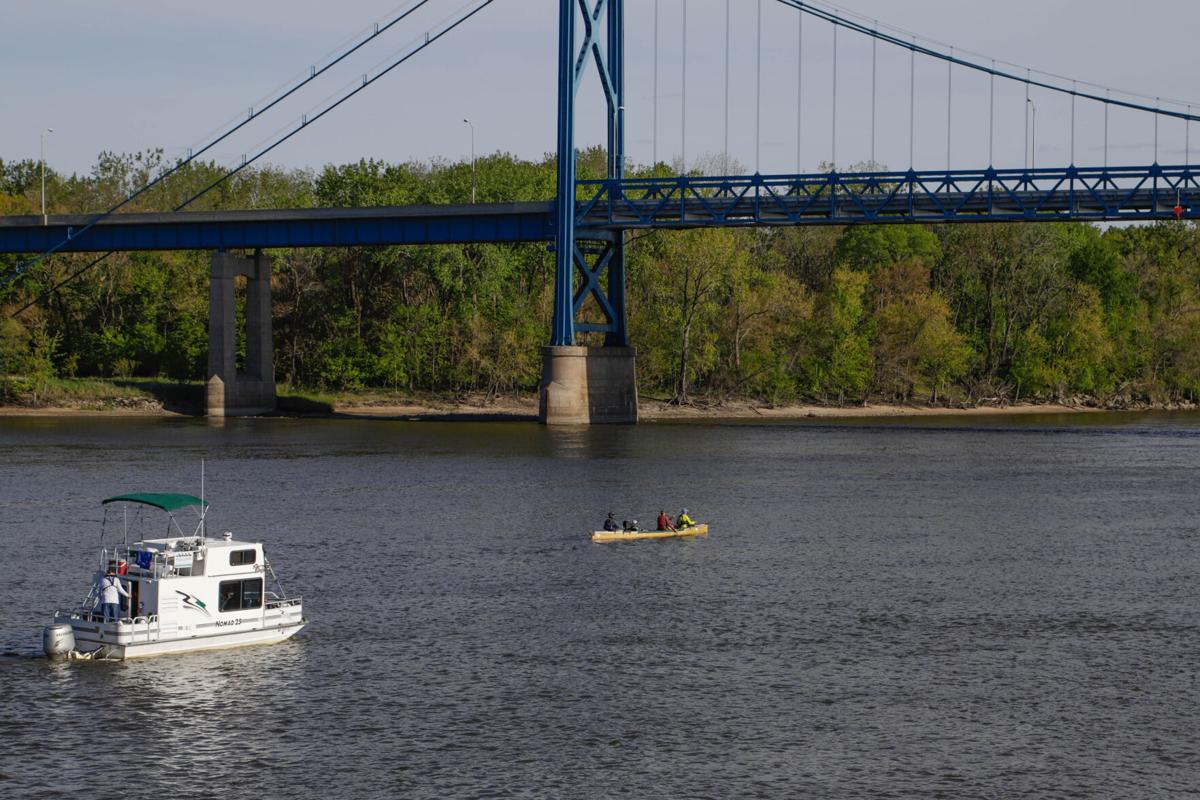 Mississippi Speed Record and its support crew approach Clinton’s South Bridge Tuesday on its way to the Gulf of Mexico.

Perry Whitaker, in the front of the canoe, interacts with Mississippi Speed Record's support boat Tuesday in the lock at Lock and Dam 13 near Fulton, Ill. Winona Whitaker/Clinton Herald

The Mississippi Speed Record canoe team leaves Lock and Dam 13 Tuesday in its world record attempt. The team was about five hours off the pace Wednesday morning. Winona Whitaker/Clinton Herald

Mississippi Speed Record and its support crew approach Clinton’s South Bridge Tuesday on its way to the Gulf of Mexico.

When the four outdoorsmen who are canoe team Mississippi Speed Record launched May 4 in an attempt to break the Guinness World Record for the fastest team to paddle down the entire Mississippi River, the time to beat was 18 days, 4 hours and 51 minutes.

But MMZero, which consists of father and daughter KJ and Casey Millhone, Rod Price and Bobby Johnson, tentatively broke that record early Monday. The time to beat now – if certified by Guinness World Record officials – is 17 days and 20 hours. MMZero passed Fulton and Clinton during the afternoon of April 29.

The two teams are “friendly rivals,” said Perry Whitaker from the front of MSR’s canoe as it waited in the lock at Lock and Dam 13 near Fulton on Tuesday. Whitaker was a back-up paddler for team MMZero when it planned a record attempt for 2020.

“That trip was canceled because of the pandemic,” said Whitaker.

Now he’s in a canoe with a different team, led by Scott Miller of Minneapolis, who had the back seat in the boat Tuesday afternoon. Adam Macht had the middle paddle, and Joel Ford slept under a tarp when Speed Record passed Fulton, Clinton and Camanche.

The trip from Lake Itsaca, Minnesota to Fulton held no surprises for Whitaker, a seasoned paddler. “It’s kind of what I expected. It’s been pretty good. The river’s always been good to me.”

About five hours behind world record pace, Whitaker said the team has a chance to make up time in higher water down river. “That might help us a lot.”

Miller was also part of the team KJ Millhone and Casey Millhone put together for 2020. When that trip was canceled, Miller put together MSR for a 2021 attempt.

Miller has paddled over 4,000 miles in a canoe in his life, according to the Mississippi Speed Record website. In 2005 he paddled from the Twin Cities to Hudson Bay, and in 2020 he competed in the Missouri River 340 and Great Alabama 650 races.

Miller has been training and planning for the Mississippi River speed record since 2018. He is a registered nurse at the University of Minnesota Medical Center and a massage therapist at his shop called Body Repair.

Joel Ford, of Fallston, Maryland, spent years as a lacrosse goalie before following his father into mountain biking and his friends into multisport, according to mississippispeedrecord.com. Adventure racing has become Ford’s passion: He and his Rootstock Racing teammates won the US National Championship in 2018.

Ford hiked the Appalachian Trail in 2011 and the Pacific Crest Trail in 2019. He volunteered with the Peace Corps in Cambodia and toured the U.S. National Parks in his converted Nissan van.

Ford contributes a racing perspective and a positive attitude to the team, as well as stories to share with teammates under starry nights along the Mississippi, his bio says.

Whitaker is an experienced kayaker and canoeist from St. Louis. He finished the Missouri River 340-mile race 12 times and is an expert on the Mississippi River in the St. Louis area, his bio says.

Whitaker frequently leads groups on the stretch of the Mississippi from St. Louis to Cape Girardeau. He volunteers for numerous organizations that focus on the health of Missouri rivers and the building of hiking trails.

Adam Macht currently lives in Ely, Minnesota but began his canoeing life on the backwaters of the Mississippi River near La Crosse, Wisconsin. Since moving to Ely, Macht has traveled thousands of miles through the Boundary Waters Canoe Area Wilderness and Quetico Provincial Park, spending hundreds of nights in the wilderness, according to the MSR website.

Macht is an outfitter at Piragis Northwoods Company, where he shares his enthusiasm for wilderness canoeing and camping by helping people plan and prepare for their own adventures into the BWCA and Quetico.

The MSR team has about 17 people on its support staff, some of whom are traveling with the canoe, on the river in a powered boat.

The canoeists rotate paddling and resting, keeping the canoe moving 24 hours per day except for portages early in the trip, repairs and quick supply stops. They eat and sleep in the 23-foot canoe.

The support crew manages the team’s safety and communication with barges and locks. It buys supplies, monitors the weather and keeps up on social media posts.

The team has partnered with 1 Mississippi to bring awareness to the challenges facing the health of the Mississippi River. Donations help offset an estimated $20,000 in expenses to feed the crew and fuel the support vehicles during the 18-day trip covering 2,300 miles down the river.

Mississippi Speed Record records its progress – and photos from fans – at www.facebook.com/mississippispeedrecord.

GPS tracking of the trip is recorded at https://share.garmin.com/Mississippispeedrecord.