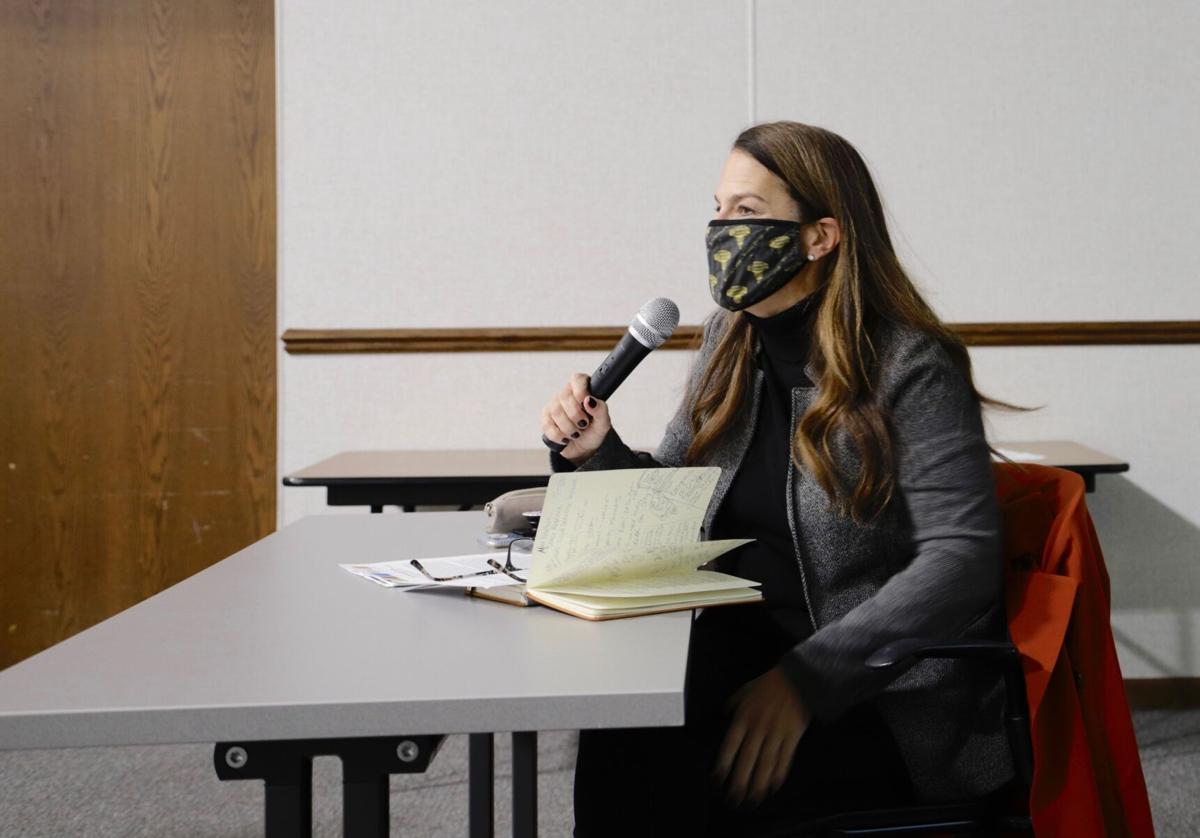 Iowa State Sen. Chris Cournoyer visits with the Clinton School Board on Monday about how the Iowa Legislature is addressing school concerns. 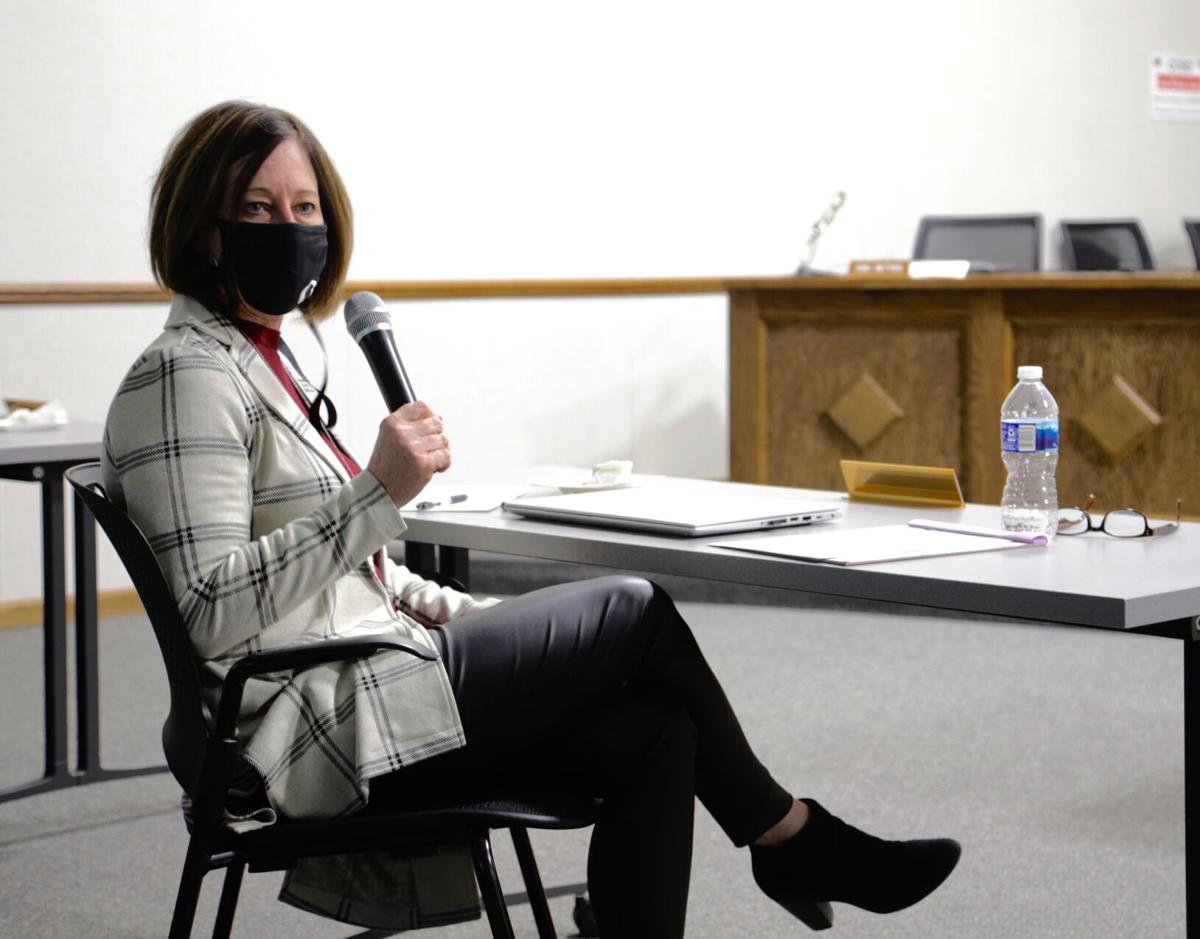 In this November 2020 file photo, Chief Financial Officer Cindy McAleer discusses the District’s finances with Iowa State Sen. Chris Cournoyer during a Clinton School Board meeting. McAleer explained Tuesday how the District will cover an $9 million overage in its renovation project. File photo

Iowa State Sen. Chris Cournoyer visits with the Clinton School Board on Monday about how the Iowa Legislature is addressing school concerns.

In this November 2020 file photo, Chief Financial Officer Cindy McAleer discusses the District’s finances with Iowa State Sen. Chris Cournoyer during a Clinton School Board meeting. McAleer explained Tuesday how the District will cover an $9 million overage in its renovation project. File photo

CLINTON — The Clinton School Board hopes the state’s $305 million surplus will translate into more funding for education.

The board related its educational concerns to Iowa State Sen. Chris Cournoyer during a meeting Monday evening. Many of the issues discussed are part of the Rural School Advocates of Iowa Legislative Priorities list.

Adequate school resources are always at the top of school lists, said Cournoyer.

“Enrollment is down across the state,” said the senator. That will affect funding for schools, she said.

“I’ve heard a couple of options that are being looked at,” Cournoyer said. The Legislature may use last year’s enrollment to calculate funding for each school, or it may offer a higher supplemental state aid.

Clinton School District Superintendent Gary DeLacy would rather see the latter; Clinton enrollment was up about 28 students, he said.

But enrollment went down for the youngest students, he said. “We only had 170 preschoolers on Oct. 1,” DeLacy said. The district typically has more than 200.

Short 40-50 4-year-olds and 40-50 kindergarten students this fall could mean a swing of 80-100 students in kindergarten next year, DeLacy said.

DeLacy suspects that parents held children back due to COVID and that those children will be enrolled next year, creating a huge kindergarten class for the 2021-2022 school year.

Another concern for schools is mental health services for students and support for staff.

Mental health costs have risen in the last five years as more people seek help, Cournoyer said. Iowa is one of three states in the nation that uses property taxes to pay for mental health services, she said. She’d like to get away from that model.

Adding a one-cent sales tax could bring in money for those services, Cournoyer said.

COVID has affected school districts in several ways, Cournoyer said. Because of constant quarantines from exposure to people who have tested positive for coronavirus, many schools are short staffed.

During remote learning days, “some kids aren’t logging in at all,” Cournoyer said.

When the district moved to online learning, it thought most students had internet access, said Chief Financial Officer Cindy McAleer. School officials were surprised how many student requested hotspots.

When classes resume normally, what kinds of achievement gaps will the district see, Cournoyer asked. How will districts handle them?

“I’m going to look for a lot of guidance from you,” Cournoyer told the school board.

Cost savings from having class online rather than in person last year were minimal, said McAleer. The district paid its staff even if employees were not working. Payroll is 80% of the budget, McAleer said.

The district saw some savings in fuel costs because it didn’t transport students to school, but it also paid about $800,000 for cleaning supplies and for an online learning program.

The district hired long-term substitutes this year so it could create more classes and keep class sizes smaller, allowing students to be spread out.

The District received $1 million in Caronavirus Aid, Relief and Economic Security funding, McAleer said. Right now, the district is in good shape financially, but it has a semester to go.

School board member Mike House asked Cournoyer for local control for schools. Gov. Kim Reynolds took too much control away from districts with some of her return-to-learn mandates, House said.

The Iowa Legislature gave Reynolds power in March to make executive decisions and gave her broader powers in June. “I don’t think we anticipated being here in November,” Cournoyer said.

The Legislature should give some of that authority back to school districts, Cournoyer said. Legislators have a good liaison with the governor, she said. “We’ll address it when we meet again.”

She’d also like to see more flexibility in the use of funding. Too many regulations are attached to school aid. As a former school board member, Cournoyer has had to deal with government regulations tied to funding streams, she said.

Without higher SSA, school districts can’t compete with the private sector, said DeLacy. With a 3.6% unemployment rate in the state, school districts have to be competitive. It’s a losing battle when increases in state aid remain below 3%.

“We can’t compete with Walmart right now,” said DeLacy. The store pays more than a para-educator can make at the school, and it offers benefits.

Cournoyer suggested that the State offer incentives to bring teachers to rural areas. Legislators think if they can entice teachers to come to rural Iowa, teachers will fall in love with it and stay, Cournoyer said.

Cournoyer congratulated Clinton on its iJag program and welding apprenticeship program and praised the economic development of Clinton, which will increase the tax base for Clinton schools.

Beverly G. Ilg, 87, died May 6, 2021, at Bickford of Clinton. Visitation is at Grace, DeWitt from 9:00 until the service at 11:00 a.m. Monday. Burial is at Elmwood Cemetery, DeWitt. Complete obituary at www.schultzfuneralhomes.com.