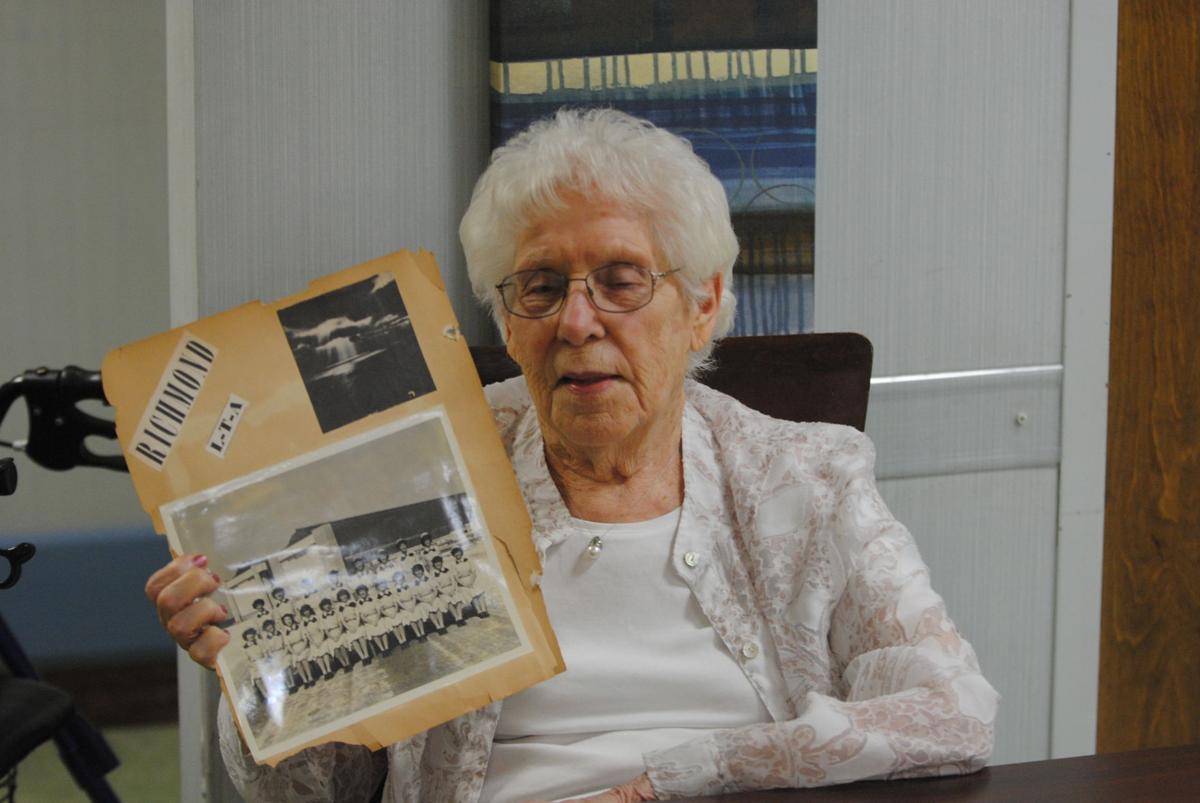 Helen Mace holds up a photo of her group of U.S. Navy Women Accepted for Volunteer Emergency Services (WAVES). Helen served from 1943 to 1945. 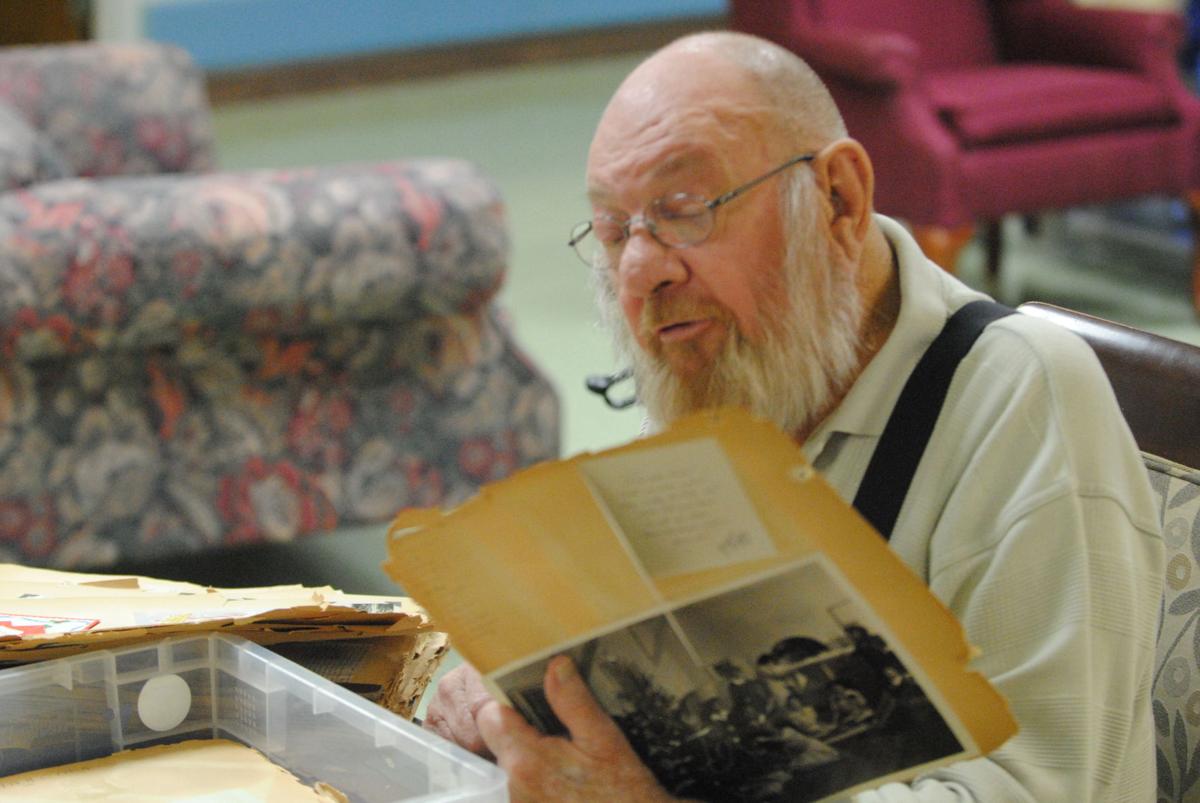 Don Mace flips through old memorabilia from his service, as well as his wife Helen’s, in various branches of the United States military. Mace served in both the Navy and the Air Force from 1948 to 1968.

Helen Mace holds up a photo of her group of U.S. Navy Women Accepted for Volunteer Emergency Services (WAVES). Helen served from 1943 to 1945.

Don Mace flips through old memorabilia from his service, as well as his wife Helen’s, in various branches of the United States military. Mace served in both the Navy and the Air Force from 1948 to 1968.

CLINTON — Don and Helen Mace sit quietly at a table in a commons area at The Alverno assisted living facility. While the busy, daily lives of others around them in the building rush by, the couple are in no hurry, flipping through a cluttered box full of worn, tattered photographs and letters.

“I love to keep the old things like this,” Helen says. “It’s all original, and if it’s too neat, it’s no good.”

They are among 26 veterans who live at The Alverno, which on Friday will honor their service during a Veterans Day ceremony.

Helen was a member of the United States Navy WAVES, or Women Accepted for Volunteer Emergency Services, from 1943 to 1945. Don joined the Navy in 1948, staying in for seven years. After leaving the Navy, he became a member of the U.S. Air Force for 13 years, retiring in 1968.

Though he was born in Sabula, Don grew up in Savanna, Illinois. He says the decision to join the military came after a period of working long overnight shifts on the railroad – and the decision came rather suddenly.

“One night, I was leaving to take my hour-long break, and one of my buddies was just coming in the door. I said to him, ‘Why don’t we join the God-danged Navy?’” Mace laughed. “And I’ll be damned if he didn’t show up at my door first thing the next morning.”

Helen was born and raised just outside of Detroit. Upon enlistment in the Navy, she was transferred to New York City, where she completed bootcamp. Before she knew it, Helen was stationed at the Richmond Naval Air Station, just south of Miami.

“Boot camp didn’t seem long at all,” Helen said. “They got you in, and they rushed you out and sent you out. It didn’t feel long at all.”

The base was used as a housing location for dirigibles, more commonly known as blimps or airships. The dirigibles were sent up and down the Florida coast, keeping a watchful eye for any approaching German submarines.

Helen worked on the massive dirigible engines, allowing her to get an up-close and personal view of the aviation marvels.

“It’s a wonder those things were ever able to get off the ground,” Helen recalled.

Helen would also go on to earn her pilot’s license, logging countless hours of solo flight in the air.

During Don’s 20 years in the Navy and Air Force, he carried out a number of duties. His career took him all over the map, from Guam to Hawaii, from Oregon to Alaska. He met Helen during his time in the the Air Force, and the couple wed in Helen’s home state of Michigan after Don became stationed there.

“I knew that if I was ever going to get married, I’d have to get out of the Navy,” Don said. “I’d be gone and moving around all the time to get married.”

Some of Don’s most vivid memories include working on a project that oversaw the firing of experimental torpedos off the coast of Washington while in the Navy. He was a crew chief for fighter aircraft during his time in the Air Force. Don also became an instrument flight trainer, sitting directly behind pilots as they learned the ropes in training equipment, a position that gives him very fond memories.

But with both of their military careers long over – Don retired from his post-military career in 1992 – the couple rarely thinks about their service anymore. They’ve got four kids, who were all born in different states as they darted around the country.

Time has distanced the couple not only from their memories, but from old friends and military buddies.

The program will honor all veterans currently living at The Alverno. They include:

Articles appearing in the front page of the Clinton Herald on November 10, 2016.

CANTON [mdash] Debra J. Bartels, 62, of Canton, formerly of Clinton, IA, passed away on Tuesday, May 19, 2020. She was born in Clinton, IA on September 21, 1957 to the late Richard and Mary Ellen Roggendorf. Debbie was employed as an Insurance Agent and Customer Service Specialist with Homes…

Clayton T. "Cookie" Cook, 94, of Clinton, passed away Wednesday at his son's home in Clinton. Arrangements are pending at the Clinton Chapel Snell-Zornig Funeral Homes & Crematory.