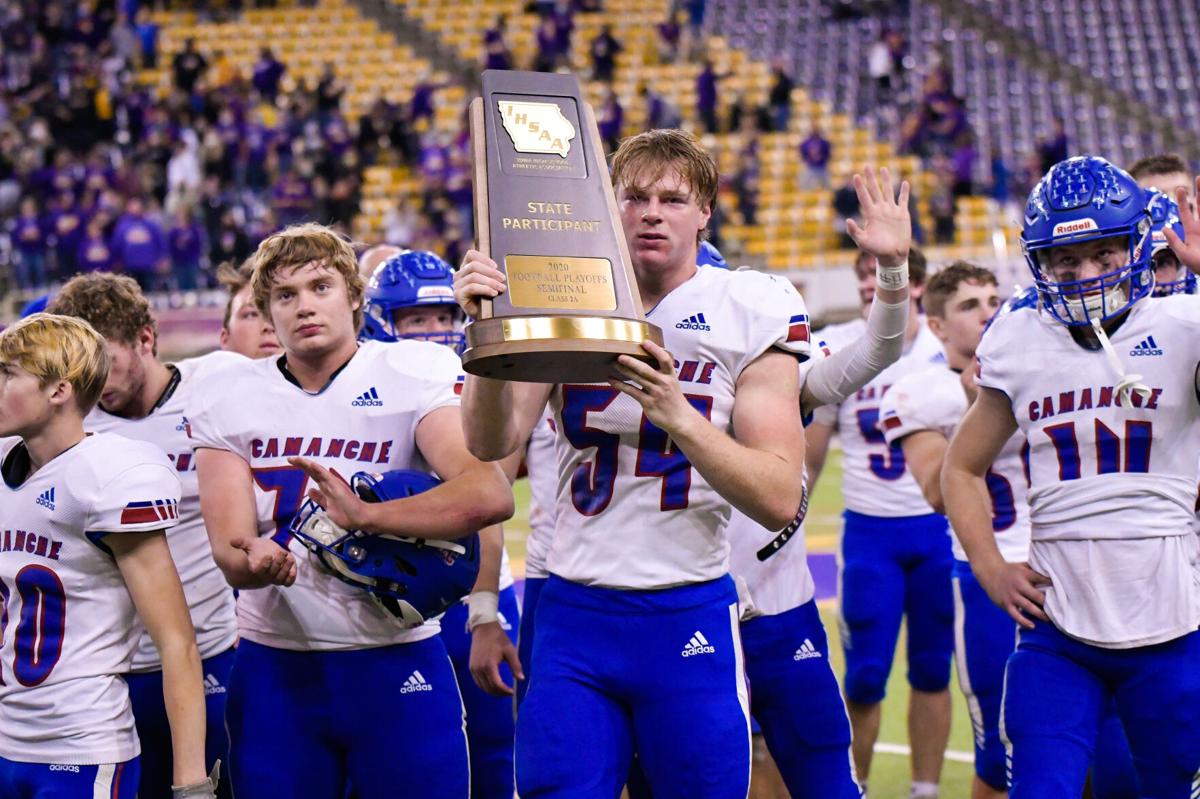 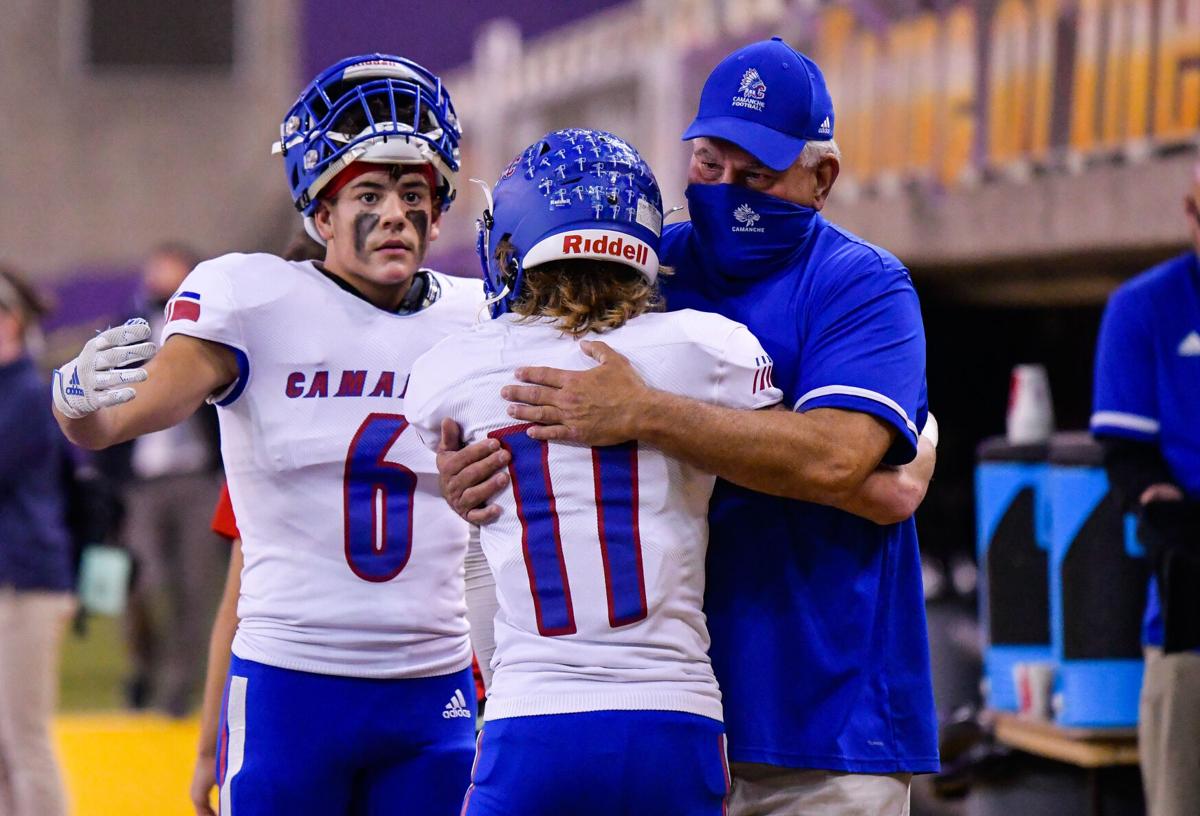 Camanche’s Logan Shaw (No. 11), Nolyn Johnson (No. 6) and assistant coach Guy McCausland (right) embrace each other during the Indians’ Class 2A semifinal game against Central Lyon Nov. 14 in Cedar Falls. 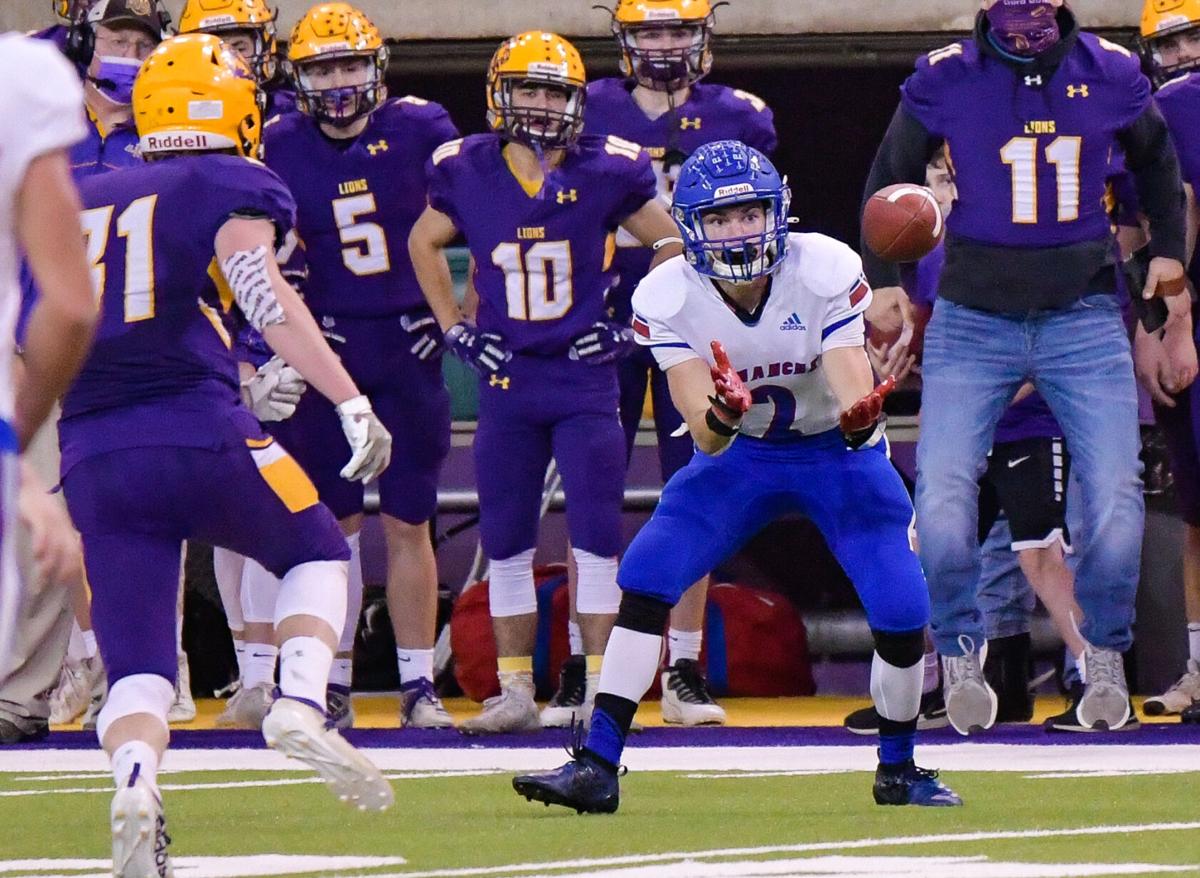 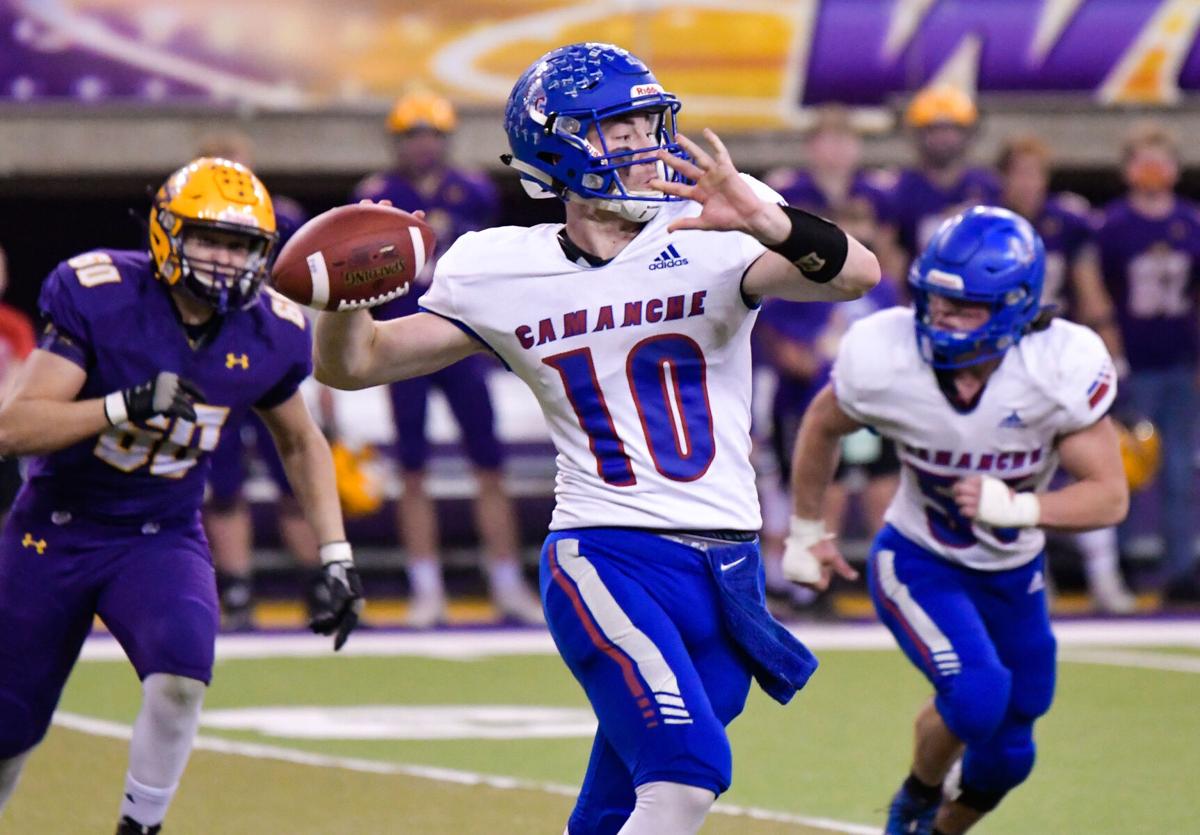 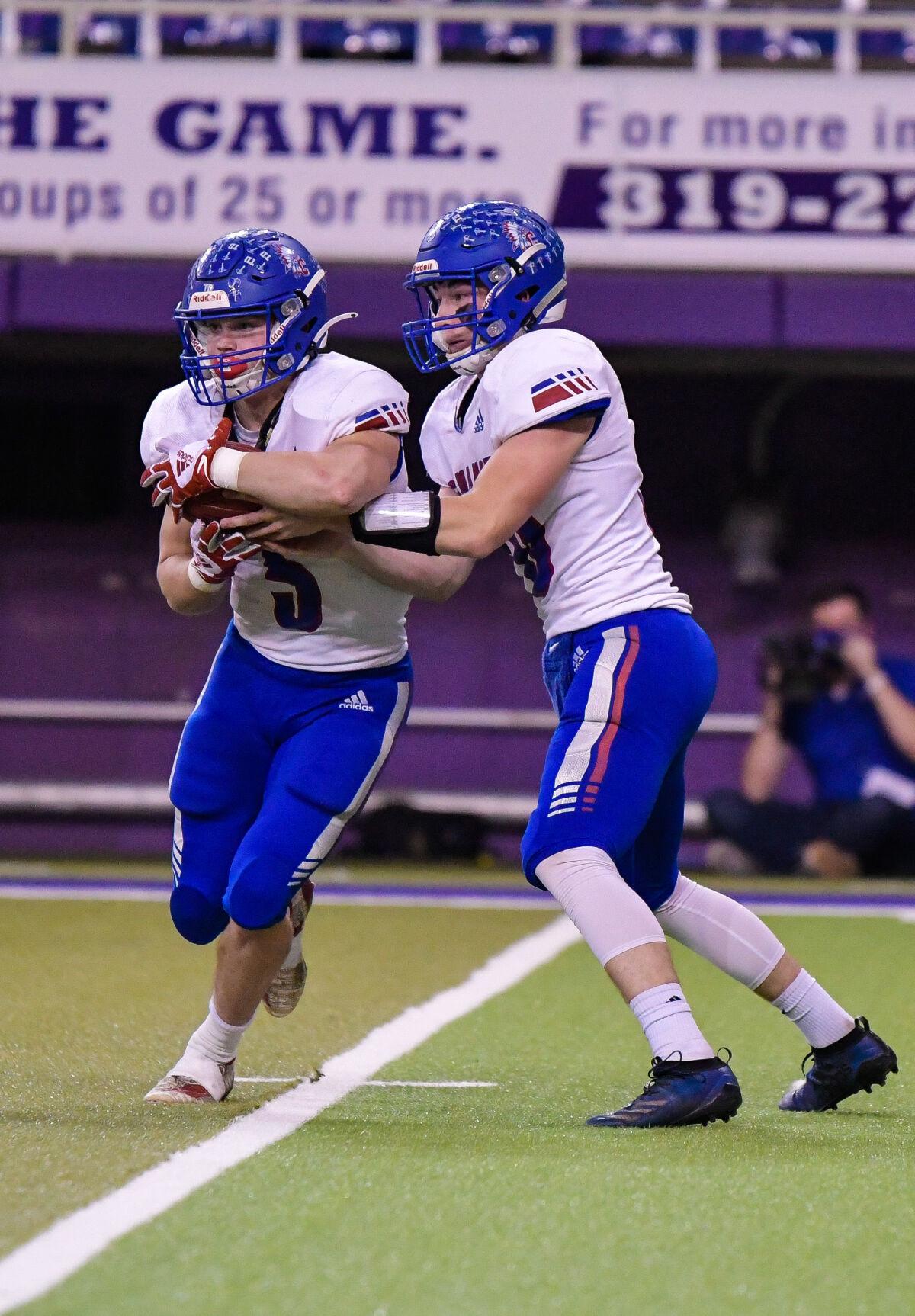 Camanche quarterback Michael Delzell (right) hands the ball off to running back Cade Everson during the Indians' Class 2A semifinal against Central Lyon Nov. 14 in Cedar Falls. 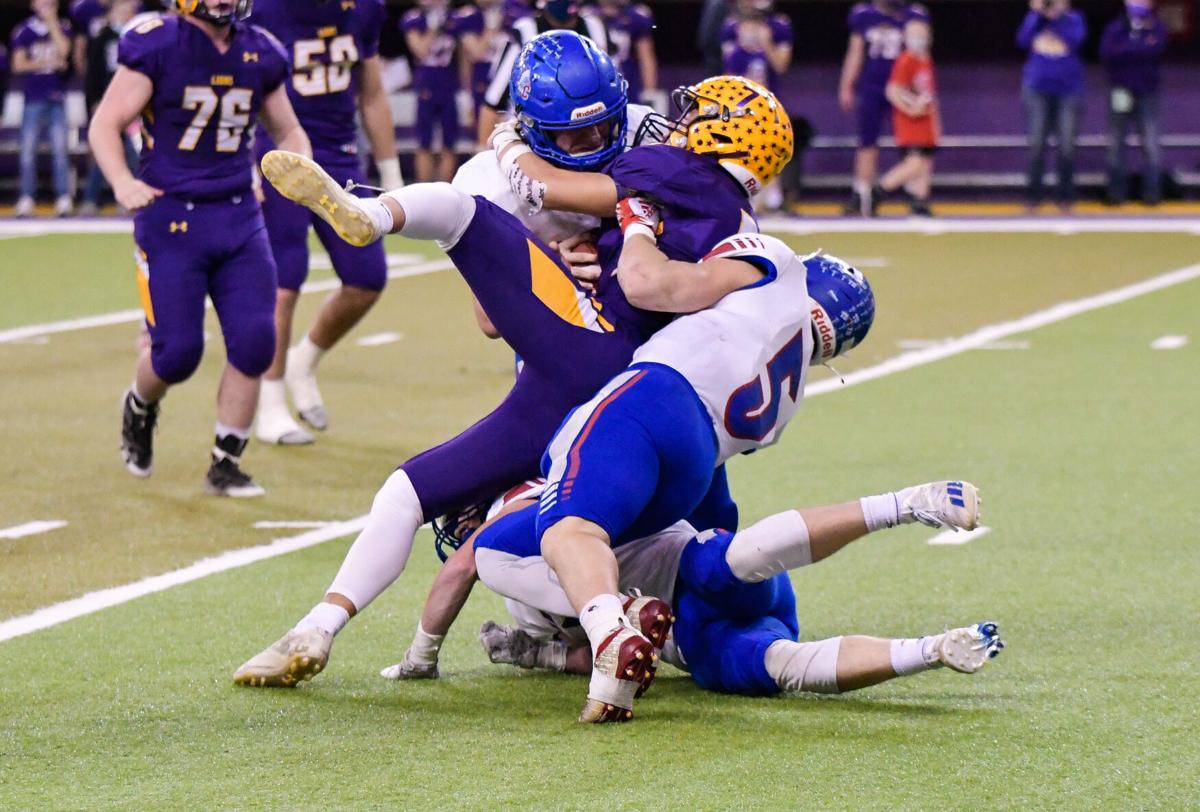 A squadron of Camanche defenders take down a Central Lyon ballcarrier Nov. 14 during a Class 2A semifinal in Cedar Falls.

Camanche’s Logan Shaw (No. 11), Nolyn Johnson (No. 6) and assistant coach Guy McCausland (right) embrace each other during the Indians’ Class 2A semifinal game against Central Lyon Nov. 14 in Cedar Falls.

Camanche quarterback Michael Delzell (right) hands the ball off to running back Cade Everson during the Indians' Class 2A semifinal against Central Lyon Nov. 14 in Cedar Falls.

A squadron of Camanche defenders take down a Central Lyon ballcarrier Nov. 14 during a Class 2A semifinal in Cedar Falls.

Three years later, those same players and same coach had their best season in program history.

“A lot of heartbreak,” Camanche senior Cade Everson said. “Seniors, it’s the last game of our careers. I’m super proud of everyone on this team, especially the seniors — just the way we turned this program around means the world to me. We came in here as freshmen, Coit, new coach, we totally just changed the culture of this program. We won one game freshman year, four games sophomore year and six last year and now we’re at the dome.

“We’ve really set the standard high for underclassmen and I just hope they can do the same as we did this year.”

Central Lyon/George-Little Rock (11-0) defeated Camanche 41-0 Saturday in a Class 2A playoff semifinal at the UNI Dome. The Lions built a 28-0 lead by halftime and out-gained the Indians 432-131 in total offensive yardage. Lions quarterback Zach Lutmer led all players with 176 yards on 12-of-14 passing with one touchdown, along with 147 rushing yards and a TD on 15 carries.

“The biggest thing we knew is, they had some playmakers and very good kids over there,” Lions coach Curtis Eben said. “We had to really focus on shutting those guys down on the defensive side. Upfront, we just controlled the line of scrimmage and minimized their big plays, and we were fortunate enough to do that.

The loss to the Lions ends the most successful season in program history for the Indians. It was the team’s first trip to the dome and the winningest season ever (9-2).

“I just told them how proud of them I am,” Coit said. “Obviously, the outcome was not what we wanted today, but just to see how far these guys have come and how hard these seniors have worked throughout their four years — I just said, ‘We accomplished a lot of things that no Camanche team ever accomplished.’

“We got here to the dome, no team’s ever done that. We had the most wins in school history as well, so we’ve got a lot to be proud of, not only with the team accolades but a lot of individual stuff we achieved, too. I’m just super happy with the way the kids played all year and this feeling sucks, but I’m still proud of what we did.”

The first drive of the game ended with Camanche quarterback Michael Delzell getting sacked on third down at the Indians’ 34-yard line, forcing them to punt.

The Lions took over and a swing pass from Lutmer to Taylor Putnam got the ball down to the Camanche 39-yard line.

Lions running back Kalen Meyer scored on a five-yard touchdown run a few plays later at the 5:18 mark for the first score of the game.

Following an Indians punt, the Lions scored again as Lutmer lofted a 26-yard touchdown pass to receiver Cooper Spiess in the back of the end zone.

“He threw some nice balls,” Coit said. “He’s just a tough runner, he’s smart and he makes the right play. We had a little confusion when he was sprinting out, we didn’t know whether to take the receiver or him, and that’s something we didn’t really see on film either, so hats off to their coaches for their plan, too.”

Central Lyon led 14-0 at the end of the first quarter.

“They really just came out and punched us in the mouth,” Camanche senior Zayne Feller said. “They’re a good team. I think they just surprised us with their physicality and their speed. Once they got the momentum, we just couldn’t get it back.”

“Once they got down to the red zone, they just went into that Power-I and just ran it down our throats, and we really couldn’t stop it,” Feller said.

Camanche was able to move the ball after the Lutmer TD thanks to a 35-yard run from Everson, but Spiess picked off Delzell on a pass that was near the goal line and gave the Lions a 28-0 lead at halftime.

Coit said the Lions came in with a different defense than he anticipated.

“They came in with a different defensive look we hadn’t really seen on film, so that kind of threw us for a little bit of a loop,” Coit said. “I thought we adjusted okay, but then they went back to the defense I thought we’d see. That’s a really good team we just played and I think they’ve got a good shot to win it next week. We just ran into a buzzsaw today and just couldn’t get stuff going that we normally get going.”

Meyer had a one-yard touchdown on run on third-and-goal at the 7:56 mark of the third quarter to give the Lions a 35-0 lead and a running clock.

The final Lions’ touchdown of the game came on a Kayden Van Berkum one-yard run at the 11:53 mark of the fourth quarter.

Delzell finished 9-of-19 passing for 92 yards and two interceptions. Everson had 61 yards on 12 carries and had 46 yards receiving on three catches.

“When they were freshmen, we knew they were going to be special,” Coit said. “It’s hard to put into words. I know I’ve said this before, but those kids are just unbelievable kids outside of football. I’m just really proud of what they were able to accomplish as a team and individually because they lit up our record books as well.”

He also praised the Camanche community, which supported the Indians all season and were out in full force at the dome.

“We’ve had great community support this year,” Coit said. “Not only them coming out here, but we’ve had a bunch of people give us donations and pay for stuff that we didn’t have to pay for. We really appreciate it and we can’t thank them enough for all the support that they have and small towns, usually if you’ve got good teams, you’ll have a good following too because people want to see them succeed, so it’s been great.”

Feller said while they might be disappointed with the loss in the short term, he knows the Indians will be able to appreciate it for a lifetime.

“I’m just so proud of them,” Feller said. “All of us have been putting in the work since our freshman year and even before in the weight room and in the offseason, doing all the hard work we need to at practice, and it got us here.

“This loss stings right now, but when we look back at it, it’s something we can definitely be proud of.”