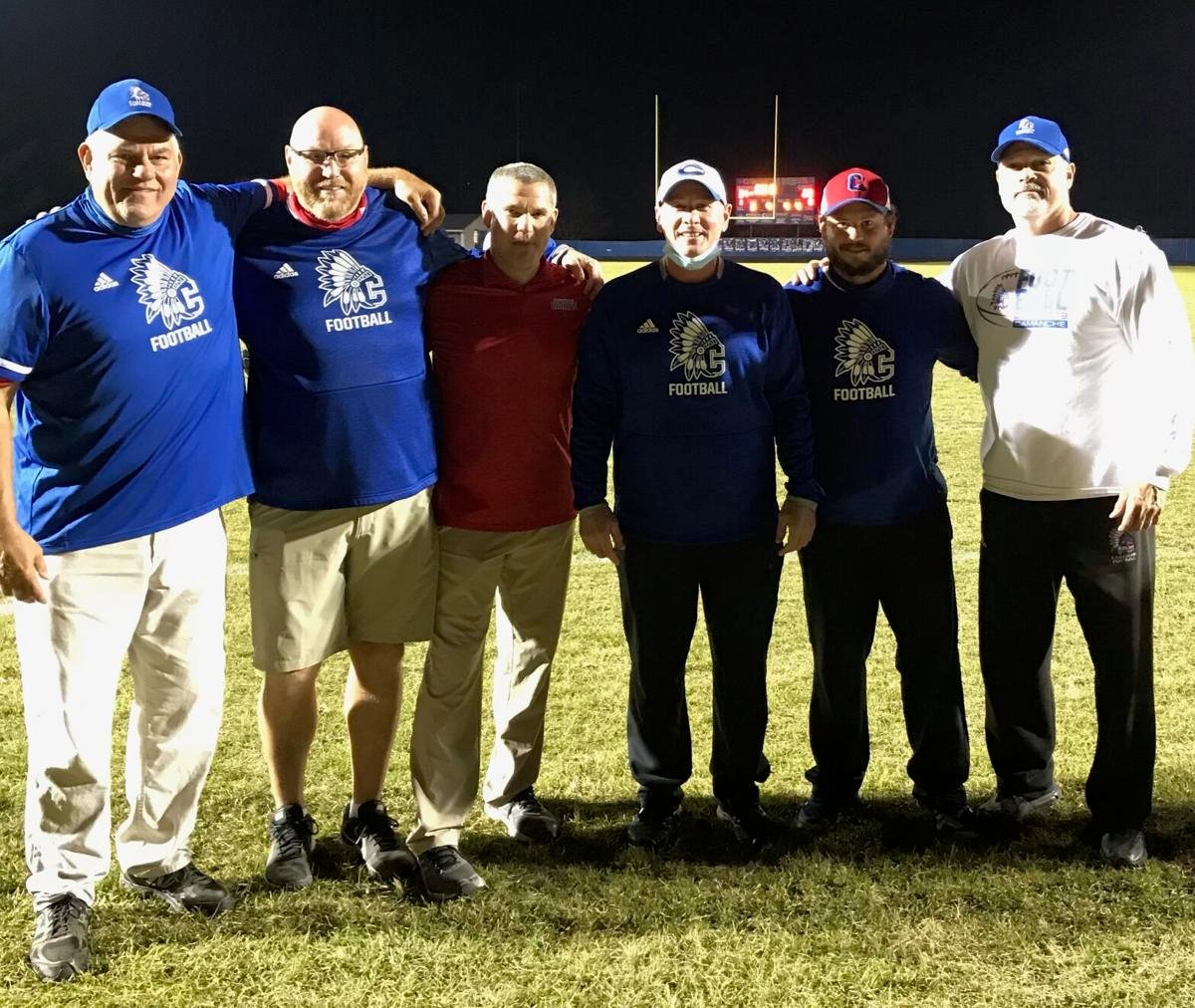 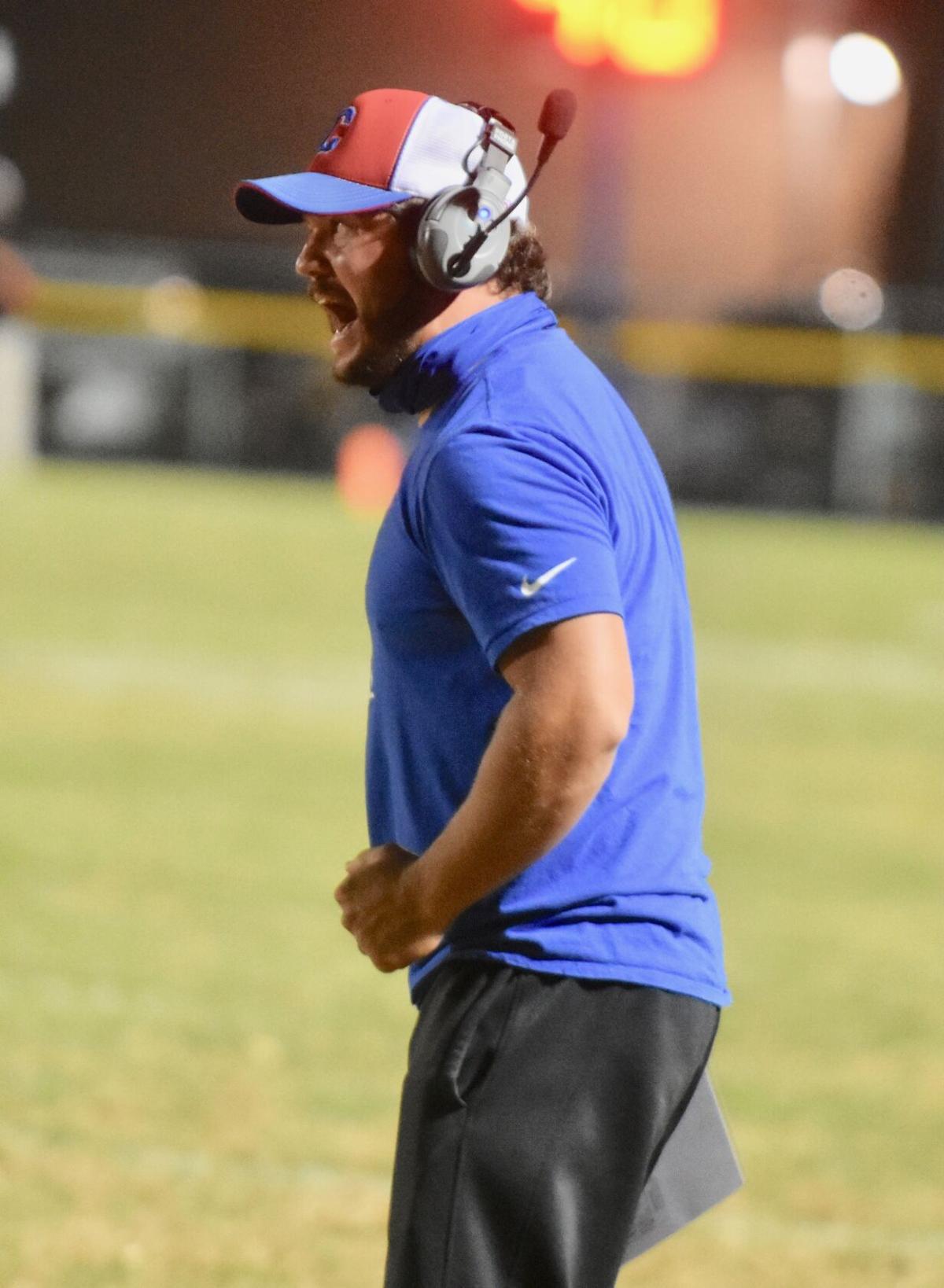 CAMANCHE — Guy McCausland was at a loss for words when asked what it meant to be a part of a staff which led the Camanche football team to the UNI Dome.

“Wow. Where do you start,” McCausland said. “For me, to have that opportunity to come back and be a part of this — those seniors we have now were freshmen when I did come back. They’ve been such an extraordinary group to coach and be around. Really good young men.

“This coaching staff, we all get along quite well, except for Sean (Lawrence).”

That last comment got a laugh out of the other Camanche coaches standing nearby.

“Thankfully, coach Mac is on the staff so I’m not the oldest,” Lawrence said.

The Indians had a lot to laugh about in the 2020 season, the team’s most successful year ever.

Leading that team into battle was head coach Dustin Coit and his staff of McCausland, Lawrence, Ryan Kinkaid, Dave Grim and Shane Buckley.

The various connections the coaching staff have to Camanche has made the already special 2020 season that much more meaningful to them.

“It’s a closeness, it’s a camaraderie not just among the coaches, but I think the coaches with the players and vice versa,” McCausland said. “It’s a family.”

Buckley moved to Camanche 12 years ago. His oldest son, Ethan, played football and graduated last year and his son Bryce is on the JV team.

“Watching the program from the last 8-10 years to where it’s at today is amazing,” Buckley said. “Coach Coit and these guys all have a lot to do with that. To be asked to be a part of this has been a great honor to me. The kids are awesome and the coaches are awesome.”

Coit said the team’s improvement has been no accident. His first year as coach was the current seniors’ freshman season, in which the Indians won one game. He and the other coaches knew early on those freshmen would be special.

“Not only are they good football players, but they’re really hard workers in the weight room, in the classroom, they’re great kids in the community,” Coit said. “It’s just a special group and you could sense that a little bit. Even when they came in as freshmen, they just had a confidence about them that most freshmen coming in don’t have.”

McCausland graduated from Camanche in 1974 and started coaching in 1988, and coached for 19 years — coaching his son in 2001-02 — before retiring, but came back into it four years ago.

“I came back into coaching four years ago because these guys were getting desperate, didn’t have any coaches,” McCausland said, jokingly, causing the others to laugh again. “Here we are, and we’re still desperate.”

McCausland said the Indians’ rise back to prominence reminds him of some of the classic Camanche teams.

“One of the things I stress to the kids is being physical,” McCausland said. “Learn to be a physical football player and that’s going to carry over. It’ll make you tougher. Camanche always had a reputation, even before I was in school, that teams did not want to play us. It wasn’t because of playing dirty, it was because Camanche was so physical and I think we’re getting back to being that way. All the credit goes to coach Coit.”

“When I was in high school, we hated Camanche,” Lawrence said. “We wanted to beat them. Grim and I played against each other in high school. People still say to me, ‘How’s it feel being in Camanche?’ At first, it was weird, but it’s awesome. It’s been unbelievable and for my kid to have the kids around him, it’s luck. A lot of it is luck where you slide in, but those kids bought in. There was a handful of really good dads that got involved and it’s just blossomed.”

Lawrence graduated from Mater Dei in 1982 and his son Jordan was one of the Indians’ top playmakers this season.

Each coach has had their own dynamic with their sons going through the program, and Lawrence is proud of the way Jordan responded to his parenting/coaching style.

“I’m super proud of Jordan because he can not get away from me,” Lawrence said. “We leave the field or go home, there’s no relief for him because of how I am. My family, I have three older kids and I was involved with everything they did too. I’m sure there’s some people that if you mentioned my name, some ‘nice’ words would pop up to describe me.

“I’m unbelievably proud of (Jordan) because that kid has endured a lot coming from me and he’s probably one of the most mentally tough kids that I’ve ever been around. It’s not easy for him for me to be his dad. I have high expectations and he’s always delivered. I’m very grateful he is the way he is because he’s handled it very well.”

Grim, a 1982 Camanche graduate, has worn many different hats at Camanche. He was athletic director from 2001-11, and coached a variety of sports over the years. He had three sons all go through the football program.

“It was probably difficult for them because there was going to be nobody accusing me of showing favoritism to my sons,” Grim said. “They had a difficult route. They had to earn whatever playing time they got, just like anybody, but they really had to earn it because they were getting it at practice and they got it at home, in terms of what they need to do to get better and what they need to do to fill their role.”

Buckley said being a coach and parent is a balance.

“It seemed like football was always part of our evenings, our weekends — everything we did was football,” Buckley said. “Now, as my son’s a freshman and I’m coaching him in JV, it’s the same thing. We video the games, we go home, we watch them. I’ve really got to watch my tongue at home and how I talk to him. He doesn’t take criticism from me very well.”

McCausland said everyone has to find what works best for them.

“A good friend of mine’s wife told my wife to make sure she told me, ‘Leave it on the field with your son, leave it at practice, don’t take it home with you,’ and that policy of ours has really worked well for us,” McCausland said. “Once in a while, I might’ve said something, but not very often.”

Kinkaid’s son, Eric, was one of the team’s top defenders this season. He’s been coaching his son in some capacity for his son’s entire football career. Eric is a third-generation Camanche football player, as Ryan’s dad, Terry Kinkaid played from 1967-69. Ryan Kinkaid’s senior year at Camanche was McCausland’s first year on the Indians’ staff.

“I’ve been very fortunate to be a part of almost every year of this group coming up,” Kinkaid said. “I’m just blessed to be a part of it. I’m glad to be a part of their development. I’m hopeful and confident I was able to contribute at least somewhat in their ability to play the game.”

Coit appreciates all of the coaches on staff.

“We all get along really well, we joke around with each other but we also know when it’s time to be serious and focus up,” Coit said. “Coach Mac, coach Grim and coach Kinkaid went to school here. I didn’t go here, but just seeing the pride the community has, and especially these guys that went through it here at the school, they bleed it and talk about it all the time.

“It’s just awesome that we were able to make school history by getting to the dome.”

Coit’s son, who is in Camanche schools, isn’t old enough to play football yet.

McCausland said one day Coit will get the opportunity to coach his son and see what all the hype is about.

“I know the feeling these guys are going through right now and what coach Coit is going to go through when his little guy gets to this age,” he said. “It’s really awesome. It’s a wonderful thing to be able to coach your kid. As parent-coaches, we’re a little bit harder on our kids than other coaches might be — at least that’s what my son told me.