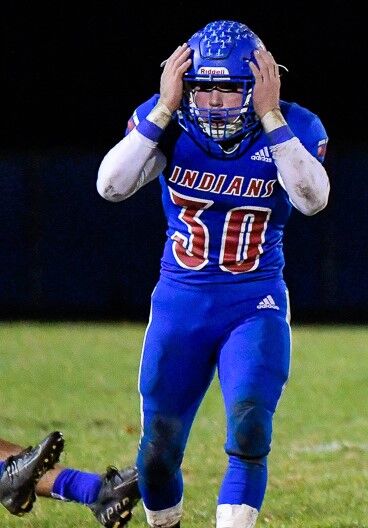 Camanche junior Eric Kinkaid reacts after a fumble recovery by teammate Adam Dunlap during the Indian’s playoff game against Anamosa at home. Kinkaid is a defensive team leader for the Dome-bound Indians. 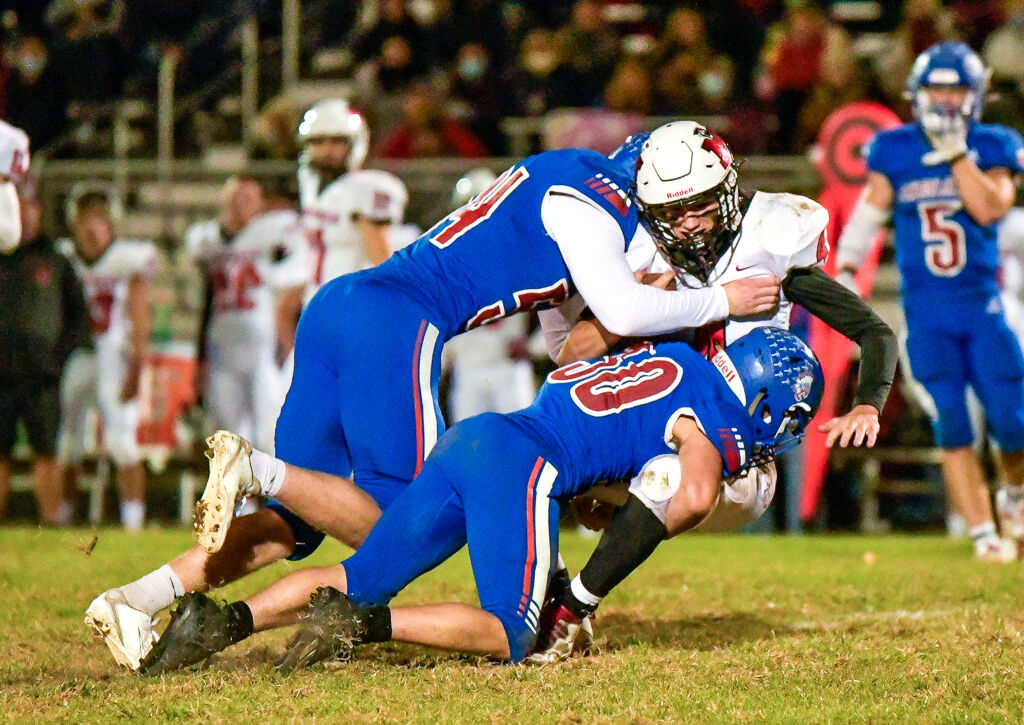 Camanche linebacker Eric Kinkaid makes a tackle, along with teammate Zayne Feller. The Camanche defense has proved to be one of the best in the state after making it to the Class 2A state semifinals on Saturday.

Camanche junior Eric Kinkaid reacts after a fumble recovery by teammate Adam Dunlap during the Indian’s playoff game against Anamosa at home. Kinkaid is a defensive team leader for the Dome-bound Indians.

Camanche linebacker Eric Kinkaid makes a tackle, along with teammate Zayne Feller. The Camanche defense has proved to be one of the best in the state after making it to the Class 2A state semifinals on Saturday.

The Camanche defense has helped the Indians’ football team make history this year, and one of its cornerstones comes in the form of linebacker Eric Kinkaid.

Kinkaid doesn’t look like much of a threat from first impressions. Standing at 5-foot-8 and listed at 170 pounds on the Camanche roster, Kinkaid has proven to be a bulldog for the Indians. He’s speedy and he’s strong, a brick wall for any rush attempts.

His small stature has never stopped him, nor has it made him rethink his defensive position.

The linebacker position came to him naturally. Along with giving him a full eye on the field, he was influenced by the football experience of his father. Ryan Kinkaid is currently an assistant on the Indians’ staff, but played linebacker himself.

“It kind of just was a position that fit me,” Kinkaid said. “My dad was a linebacker so that really helped the position. He taught me how to be in the position and use my skills there.

“He taught me how to be a defensive player completely as I was growing up. I wouldn’t be nearly the player I am without his help.”

Kinkaid has 84 tackles for the Indians this year, leading the team in tackles for a loss as well with 13. He adds two sacks to that mix.

Camanche head coach Dustin Coit has touted his defense all year long. Lovingly coined the ‘dog pound’ by Camanche super fan Bill “Cubbie” Simpson, it’s a term that’s not totally far off base. The entire defense is regularly outsized, yet they form a wall that has seemed impenetrable much of this season.

It just seems to be getting better each game.

“It really came from our success so far,” Kinkaid said of his teammates. “Every person on the defense provides their own benefit and everyone comes together and makes the perfect defense. It gives us confidence and good energy.”

Zayne Feller is another anchor on defense, putting in just under 70 tackles this season. Tucker Dickherber and Cade Everson both add 45. Adam Dunlap and Dickherber both have four interceptions a piece, along with combining for three fumble recoveries. Logan Shaw, Nolan Kagemann, Morgan Butt and others have all made significant impacts.

The group – the entire team – is extremely close. It’s not surprising from a Class 2A school in small-town Iowa, but it’s something they take pride in. The Indians have made sure their connection is intact from game-to-game, everywhere from breakfast together on Friday mornings to the moment the ball snaps.

“We’ve grown up together,” Kinkaid said. Kinkaid joins a group of six that eat game-day breakfast together at the Camanche restaurant. “Everyone knows everyone and it makes us closer on the football field. It makes us play better. You’ve been around each other so much you can trust them in everything.”

Whether it’s the on-field fluidity or the mentality that sets them apart, one thing is absolutely for sure: the Indians have worked to get where they are. Kinkaid is just one of many examples.

Kinkaid wrestles at 132 for the Indians in the winter, working to put on pounds for the football season. His teammates have joined him regularly in the weight room in past years, getting stronger and faster to be where they are today.

“I’ve learned that hard work pays off,” Kinkaid said about the 2020 season. “Every single one of them got in the weight room and put in the work in the offseason and its paying off now.”

The defense has worked to be physically better, but they’ve worked mentally, too.

It’s something Kinkaid takes pride in.

He says it’s helped immensely, bringing up the West Liberty game as an example. They shifted their linemen in a way to try and stop running back Jahsiah Galvan – something that they thought was unique and helped them beat the Comets twice this year.

Kinkaid has already been a part of a historic Camanche football team and solidified himself as an integral part of the lineup. His impact is evident every time he’s on the field.

He’s working on his offensive prowess as well. Senior Cade Everson handles most of the running yards, but has been putting in extra time with Kinkaid for the shift to offense next year.

Kinkaid’s junior year has clearly offered him plenty of success and highlights, although he’s hopeful the best is yet to come as the Indians prep for a trip to Cedar Falls.

“Right now, [the highlight has been] just making the playoffs,” Kinkaid said. “It’s the first time a team has ever made it to the Dome.

“I don’t think it’s hit me yet, but it’s a pretty big deal. I know I’m going to look back on this and be so proud to be on this team.”