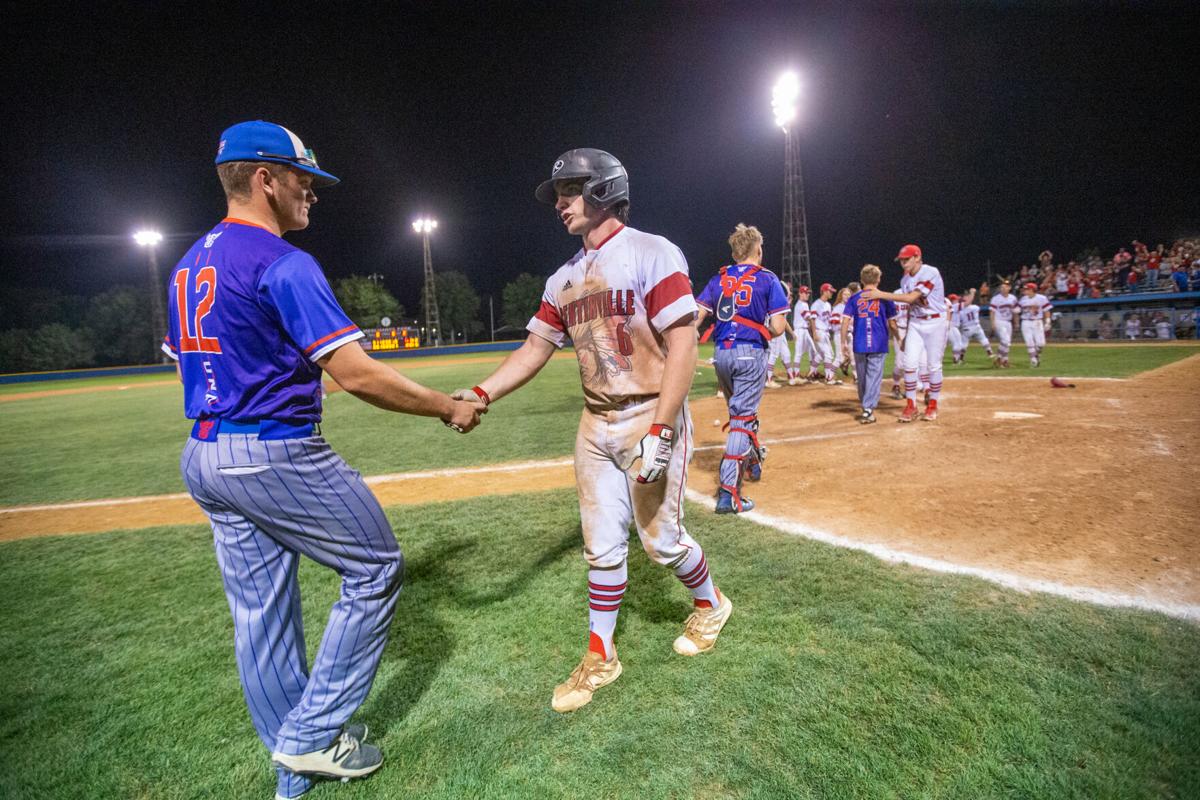 Camanche’s Nolan Kagemann (left) shakes hands with Centerville’s Otis Williams after the class 2A state semifinal game between the Centerville Big Reds and the Camanche Indians at Merchants Park in Carroll, Iowa on Wednesday, July 28, 2021. 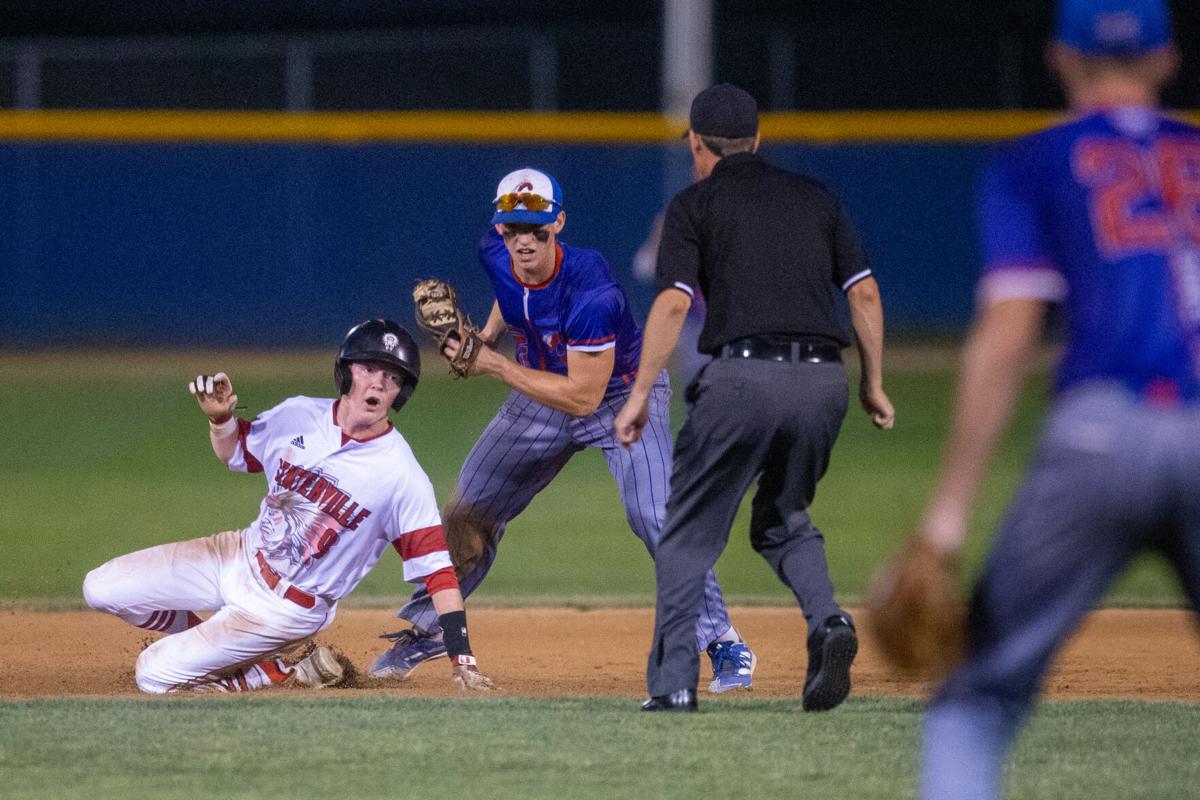 Camanche’s Mike Delzell (center) looks to tag out Centerville’s Kellen Johnson during the class 2A state semifinal game between the Centerville Big Reds and the Camanche Indians at Merchants Park in Carroll, Iowa on Wednesday, July 28, 2021. 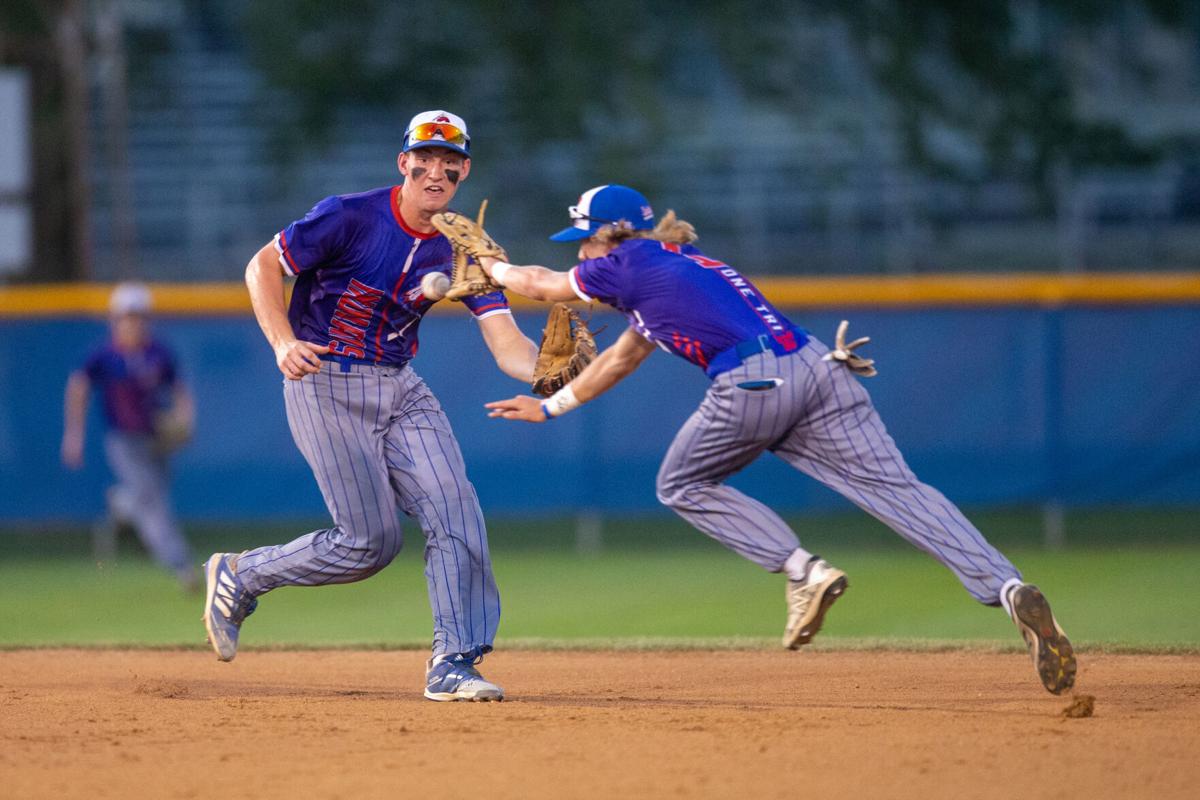 Camanche’s Mike Delzell (left) and Logan Shaw make a play on the ball during the class 2A state semifinal game between the Centerville Big Reds and the Camanche Indians at Merchants Park in Carroll, Iowa on Wednesday, July 28, 2021.

Camanche’s Nolan Kagemann (left) shakes hands with Centerville’s Otis Williams after the class 2A state semifinal game between the Centerville Big Reds and the Camanche Indians at Merchants Park in Carroll, Iowa on Wednesday, July 28, 2021.

Camanche’s Mike Delzell (center) looks to tag out Centerville’s Kellen Johnson during the class 2A state semifinal game between the Centerville Big Reds and the Camanche Indians at Merchants Park in Carroll, Iowa on Wednesday, July 28, 2021.

Camanche’s Mike Delzell (left) and Logan Shaw make a play on the ball during the class 2A state semifinal game between the Centerville Big Reds and the Camanche Indians at Merchants Park in Carroll, Iowa on Wednesday, July 28, 2021.

CARROLL, Iowa — With two outs in the bottom of the eighth inning, the game tied and two runners on base, Centerville’s Merrick Mathews came up to bat.

The ball cracked off the bat to left field. The Centerville fans stood up. The Big Reds’ coach waved the runners across.

“That’s the difficult part about a season ending like this, you’re going to look back and you’re going to think about those situations — ‘Only if we could’ve done this a little different,’” Cochran said. “I’m sure I’ll be second-guessing myself, I don’t know for how long.

“It’ll be a little while before this gets the sting out of it.”

Mathews hit the game-winning, walk-off RBI as Centerville defeated Camanche 12-11 in a Class 2A State Semifinal Wednesday at Merchants Park.

Camanche built a 10-3 lead, but the Big Reds scored six unanswered runs to cut the deficit to 10-9. Camanche finally got another run on the board to make it 11-9, but in the bottom of the seventh inning, Brady Kauzlarich hit an inside-the-park home run that scored two runs to tie the game 11-11, setting up Mathews’ walk-off.

“It was definitely a crazy game,” Camanche’s Tucker Dickherber said. “We had our opportunities, they had their opportunities and unfortunately they were the ones that were able to come out on top tonight.”

The Indians left 12 runners on base — including bases loaded with one out in the seventh — and had 11 hits to Centerville’s 21.

“State semifinal game, that’s a hard pill to swallow leaving that many runners on base,” Dickherber said. “Unfortunately, it wasn’t our night. We only had 11 hits, they came out and had 21. We only had two errors as well. They were able to come out here and hit gaps. They played a really good ball game.

“It was a great season. It was fun to play with everybody and I had a blast. It was great to end out here.”

The loss ends the most successful baseball season for Camanche since 1996.

“I had this feeling that it was going to come to that last at-bat, and it did,” Cochran said. “This is that one time where you hope that you were the home team, but we just didn’t have that going for us tonight. I’ve got to give our kids credit — we kept battling and battling. We got some tough outs there in some tough situations and we competed.

“I couldn’t ask for the kids to do anymore than that.”

The Indians took an 3-0 first-inning lead as Dickherber scored on an error, and both Mike Delzell and Garrett Schultz both scored on wild pitches.

The Big Reds responded with two runs scored off a Camanche error to cut the lead to 3-2, but then Morgan Butt scored on another wild pitch to make it 4-2. Camanche’s Mason Duritza and Centerville’s Mathews each had RBI singles in the third inning to make it 5-3.

Unfortunately, the rest of the game belonged to Centerville.

Three RBI singles in the fifth made it 10-6. In the sixth inning, Centerville’s Sabin Esaias hit a leadoff single, then Camanche subbed the starter Erwin for Delzell.

Delzell gave up a two-RBI single and walked in a run with the bases loaded, but maintained the Camanche lead, 10-9.

DeWeerdt gave the Indians some insurance with an RBI single that scored Dickherber, but the Indians missed an opportunity with the bases loaded, popping up for an out and then grounding out into a fielder’s choice.

That would prove to be crucial.

Kauzlarich hit the home run to tie the game, then the Big Reds missed an opportunity to end the game in regulation. Centerville’s Korey Shondel hit a single to centerfield and his teammate Otis Williams was rounding third with a good lead on the Indians’ fielders, but got held up by the third-base coach at the last second, causing him to fall and then barely beat the throw to third.

Delzell struck out the next batter and then forced a ground out into a fielder’s choice to send the game to extras tied 11-11.

With two outs in the top of the eighth, DeWeerdt grounded out for the final out after back-to-back fly outs, but it appeared he could have been safe, causing Cochran to have a conference with the umpires.

“We talked about it and the first base umpire said he held the bag, but then the home plate umpire said he got him on the tag, so I don’t know — they said he was out, so what are you going to do,” Cochran said. “You just have to take that one in stride and it’s one of those things, we’ll probably look back and think, ‘Okay, if that was a different situation, maybe we punch a run across in that half inning.’”

The out stood, ending the top half of the eighth.

In the bottom half, Delzell forced a pop up, allowed a single, forced a bunt-out and then intentionally walked Kauzlarich. Cochran then made the call to bring in Mason Byrns to pitch.

“We were looking for somebody with a bit more velocity,” Cochran said. “We thought if anybody was going to stop it — Mason did a great job for us coming in relief in the Beckman substate game, and we were hoping we could catch a little magic there and it just didn’t work out for us.”

Mathews walked it off in the next at-bat, ending the game.

Despite the result, Erwin was proud of the team’s improvement this season.

“I would say a lot of improvement, from last year especially after having a bad season throughout everybody, and then coming out here and getting better throughout the whole season and then hitting our best in the state tournament is what you like to see,” Erwin said.

Dickherber said they were an inspiration.

“It was just a mentality,” Dickherber said. “They came ready to go every single day and I think that’s something all of us could come away with. They put in the work when nobody else was watching and that’s why we were able to end up here, so I think it’s very important that we continue that and come out here and we do the same thing, and continue this in other sports.”

Cochran praised the group as well.

“The kids have worked their butts off all season long,” Cochran said. “A lot of these guys were playing as eighth graders and I couldn’t ask for a better group of kids. These kids came into this program and really turned it around for us. Not only in baseball, but all the other sports as well. I think I just got the first crack at them as being eighth graders.

Camanche finishes 24-7. From the substate quarterfinal to the state semifinal, the Indians outscored their opponents 55-29 across five postseason games.