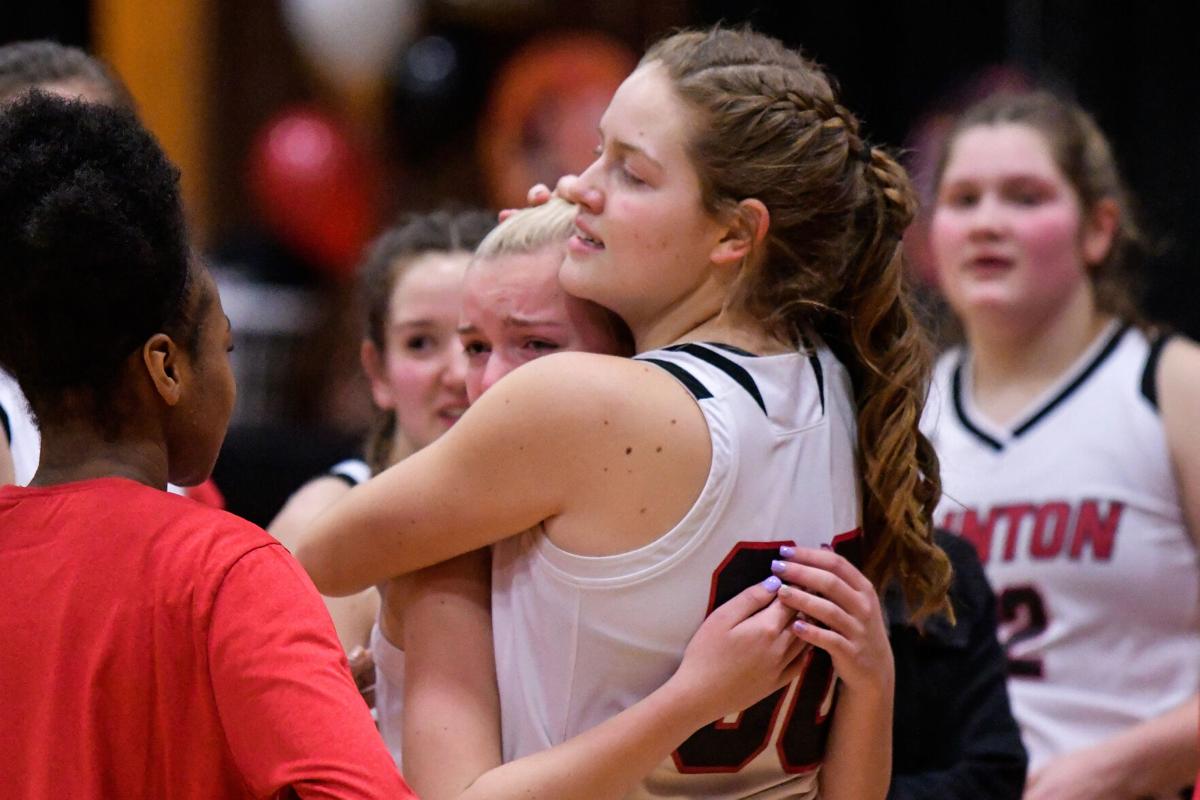 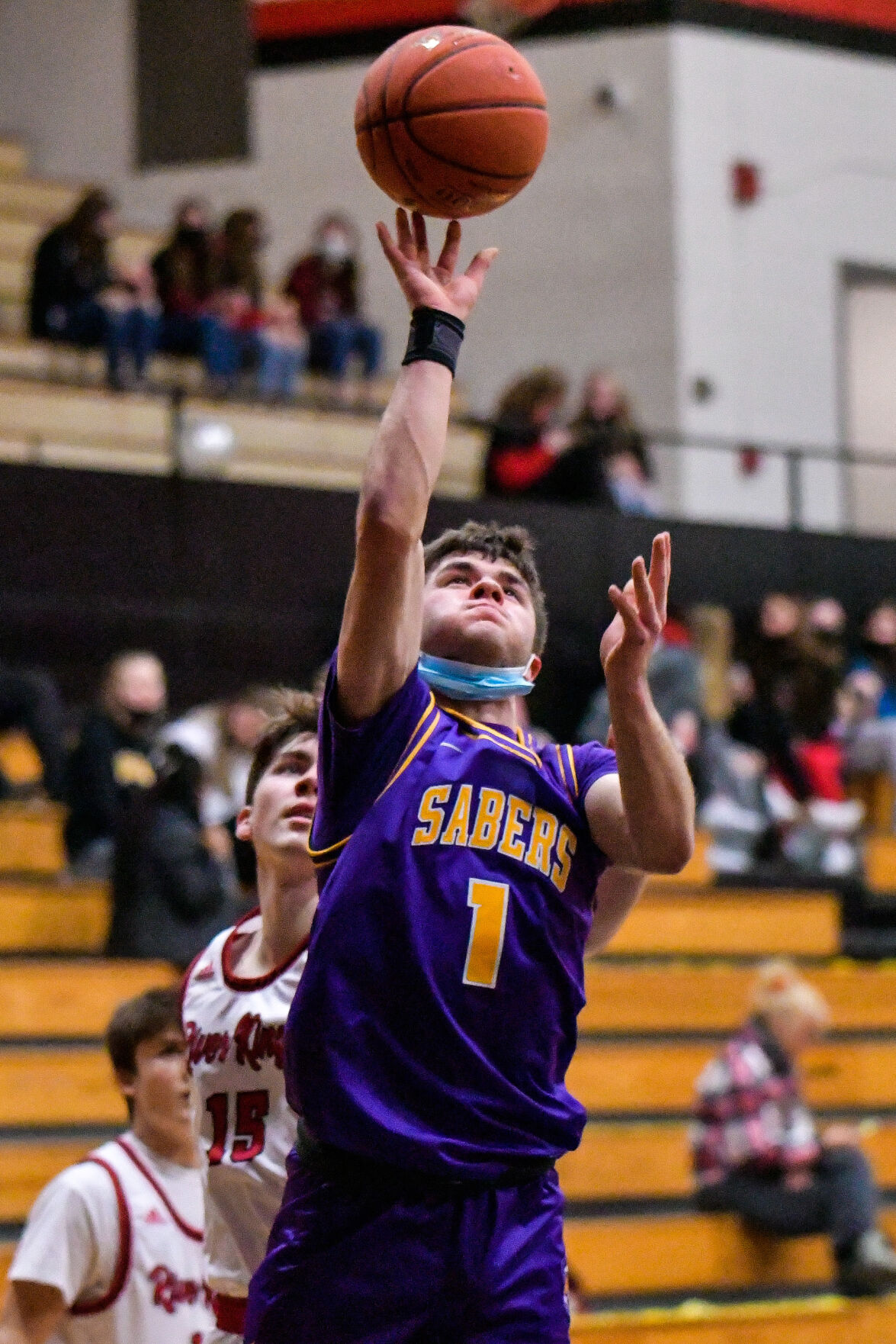 CLINTON – With the first 3-point shot of the night, the girls Mississippi Athletic Conference matchup between Clinton and Central DeWitt became bigger than basketball.

Senior Elle Davis, who got the start for the River Queens, drained her second 3 attempt of the night. Immediately, a timeout was called and Davis was subbed out, greeted with hugs from the bench and a well-deserved standing ovation from the Senior Night crowd in Yourd Gymnasium.

“It was really emotional,” Davis said. “I felt like it was all of us seniors coming together, all our hard work we put into this season and pushing through those challenges. Shooting that 3, I was emotional and then I got to come into the huddle and see everyone there.

“I don’t think I would have been that emotional on Senior Night at all if I hadn’t been through that. It made me appreciate it all a lot more.”

Davis has missed much of her senior season thanks to some health complications. After carrying a large majority of the points for the River Queens as a junior, she watched most of her last season in red and black from the bench.

That didn’t stop her from being the best part of the basketball team she could be.

“When you have a girl that has the maturity to realize that she can’t do what she wants to do,” head coach Cathy Marx said through emotion on Friday. “Her dad is a coach, she’s been in basketball, she lives and breathes basketball. She showed up every day for practice, she took the board, she ran the clock, she jumped in and coached the girls and said, ‘This is what life is, I have to keep going.’

“At that age, you don’t see that. It was never a pity party.”

Clinton and Central DeWitt worked out the agreement in advance of Friday night’s game. The Sabers gave Davis the room to take her last shots, and then all of them joined in congratulating her as she made her way off the court.

“We came into it knowing it was going to happen and we were on the bench cheering for her,” Central DeWitt junior Allie Meadows said. “We don’t even know her personally and that was the coolest part. We felt connected to her because we were on the floor with her and that was really cool.”

From there, the Queens put forth one of their best offensive efforts of the season against the No. 5-ranked Sabers, despite the Sabers coming away with a dominant 70-43 win. By the end of the first quarter, they trailed by just one point. A put-back from senior Makenzie Cooley and then a 3 from Riley Mussman gave them a 17-13 lead.

Central DeWitt’s Taylor Veach responded with a 3 and the Sabers called a timeout.

The Queens continued to break the Dewitt press, launching a few passes over the hands of the defense for easy layups on the other end. They had the game as close as nine in the third quarter.

But something clicked in the Sabers – especially Taylor Veach and Allie Meadows – and they kicked up the intensity by the end of the third quarter. Veach and Meadows started making things happen in the lane and forcing the pace with the defense.

“I think it was definitely halftime,” Allie Meadows said. “We looked dead, we were playing dead, it was not good at all. We knew we had to step it up a little bit, it’s time to go. We finally got it figured out in the second half.

“Their zone, putting Taylor or Talbot in the middle really helped. They’d get it and either put up a shot or get it back out to shooters. First half, we were just passing it around and that led to a lot of dead periods. Passing it into the lane and kicking it out helped big time.”

By the fourth quarter, the high-pressure defense had the River Queens gassed and had the Sabers extending their lead play by play.

From the get-go, the Sabers had control over the River Kings Friday night.

It was a switch up from the previous contest. The game in early January between the two also ended in DeWitt’s favor, but it was just a five-point contest in which the River Kings got out to a quick lead.

“It was good to get up early, practice playing with a lead a little bit,” DeWitt coach Grady Gallagher said. “Once we get a few outside shots to fall, then we can get the inside to open up a little bit, too.”

A flurry of 3s off the hands of the Sabers switched that up on Friday, sending them sailing to a 71-59 victory over Clinton. The Sabers managed a 20-point lead before the end of the first half.

“Offensively, we didn’t have much to complain about tonight,” Gallagher said. “Defensively, we still want to work out a few kinks. But we had a balanced effort, and the effort was good.”

Meanwhile, the River Kings weren’t seeing much offensive output at all. They struggled to get a consistent offense going in the first half.

“They were pressuring us a little bit, but we just weren’t executing the plays,” Clinton senior Tre Bailey said. “People were just doing whatever they wanted. If we could have executed the plays I think it would have been a different story.”

Clinton managed just 21 points in the first half, trailing by 18 when they went to the locker room.

The River Kings came into the third quarter and knocked down a couple of shots, but the Saber offense kept rolling, too.

A couple of defensive breakdowns left open lanes for Central DeWitt drives, and left the River Kings fouling quite a bit in the lane throughout the third and fourth quarters.

“We need to be more aggressive when they’re driving in,” Bailey said. “We can’t just let them get to the spot, we need to cut them off.”

Clinton did their best to whittle down the lead. A couple of offensive putbacks and some drives off the hands of Tre Bailey helped pick up some ground, but they never were able to cut it closer than ten points.

“We just need to put two halves together and execute from the beginning,” Bailey said. “We can’t just come out strong in the second half.”

And Coach Ersland: “For whatever reason, we haven’t put together four quarters this year. We had a season low turnovers – just five turnovers – but we need to put that together for a full game.

The River Kings (1-16) play Davenport West on Tuesday and then welcome Assumption to Yourd Gymnasium Thursday night to wrap up the postseason. The Sabers (11-7) play at Assumption Saturday afternoon in a quick turnaround, before finishing up MAC play Tuesday and Thursday.