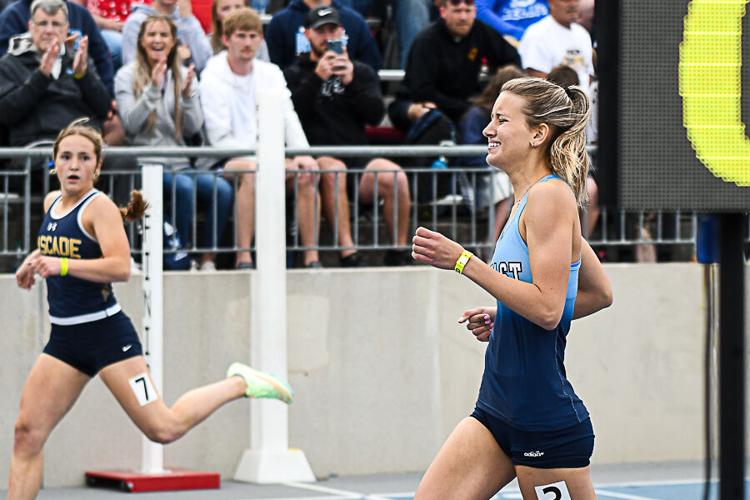 Northeast senior Ellie Rickertsen crosses the finish line after the 400-meter hurdles at the 2022 state track meet. Rickertsen is one of the 2022 CHAPY finalists for Female Athlete of the Year. 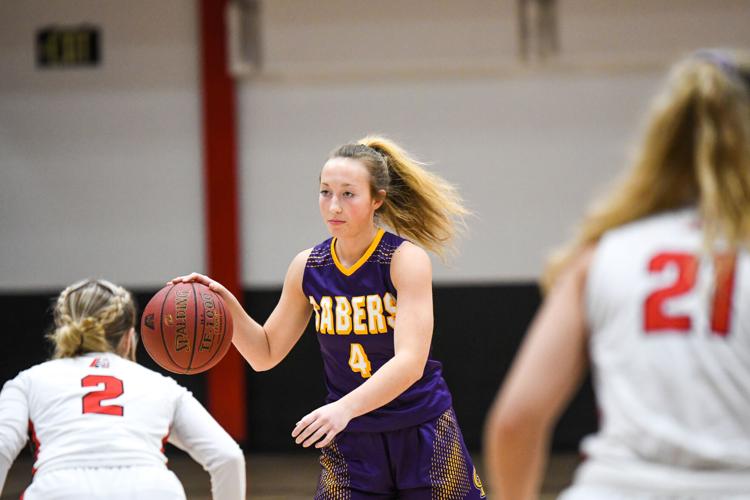 Central DeWitt’s Allie Meadows takes point against Davenport Assumption during the 2022 basketball season. Meadows is one of the 2022 CHAPY finalists for Female Athlete of the Year. 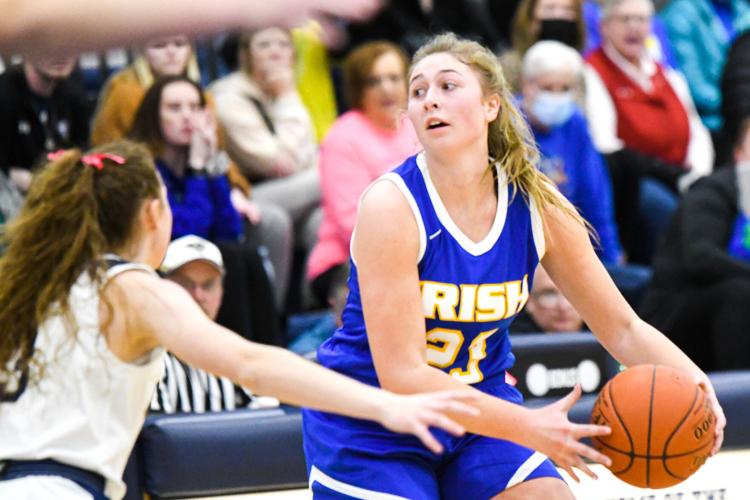 Prince of Peace’s Lilly Isenhour looks for an option during a postseason game against Calamus-Wheatland in February 2022. Isenhour is one of the 2022 CHAPY finalists for Female Athlete of the Year.

Northeast senior Ellie Rickertsen crosses the finish line after the 400-meter hurdles at the 2022 state track meet. Rickertsen is one of the 2022 CHAPY finalists for Female Athlete of the Year.

Central DeWitt’s Allie Meadows takes point against Davenport Assumption during the 2022 basketball season. Meadows is one of the 2022 CHAPY finalists for Female Athlete of the Year.

Prince of Peace’s Lilly Isenhour looks for an option during a postseason game against Calamus-Wheatland in February 2022. Isenhour is one of the 2022 CHAPY finalists for Female Athlete of the Year.

The third annual Clinton Herald Athletic Performers of the Year (CHAPY) Awards are fast approaching. For the first time, the awards will be announced at an in-person event at Vernon Cook Theater at Clinton High School. The event is scheduled for July 27.

Capping off the awards will be the Male and Female Athlete of the Year, and the finalists are ready to be announced.

There was no way to talk about athletes without talking about Northeast senior Ellie Rickertsen, making her a finalist spot for the Clinton Herald Athletic Performers of the Year (CHAPY) Awards Female Athlete of the Year.

“It’s just outstanding,” Northeast head track coach Paty Healy said. “I mean, Northeast has had quite a few really good athletes and she ranks right up there with them. It makes the year more exciting when you know you have a possible state champion every time you go out there.”

The University of Iowa track commit may have reduced her sports her senior year, but it was for good reason. She had her eyes set on some lofty goals come spring time and she reached every one.

Rickertsen became the sixth girl in Iowa history to repeat as the 100 and 400-meter hurdle champion two years in a row.

“It’s insane,” teammate Madison Tarr said. “It helps when you have someone who can finish like her, especially in the Sprint Med, it’s really up to the 400 runner and she always does what she’s supposed to and even more.”

Rickertsen ran the second fastest 100-meter hurdle time of all time in the Spring, clocking in at 13.91 at Monticello. She was just one one-hundredth of a second off the best of all time.

To top it off, Rickertsen played volleyball for the Rebels and made big impacts. She’s played basketball in the past but decided to focus elsewhere this last winter.

Isenhour was named to the Tri-Rivers East All-Conference First Team in both volleyball and basketball. On the volleyball court, she notched 246 total kills this season with 283 digs and 47 blocks. She led the Irish in all three categories.

“She just doesn’t give up, she doesn’t give attitude when things start to go bad,” Irish head volleyball coach Stacie Kenneavy said. “She asks, what am I doing wrong instead of not turning to us. She’s always asking to improve and that’s what we want all our players to do.”

In basketball, she became the first ever to surpass both 1,000 points and 1,000 rebounds, notching her 1,000th in one of her final games with the Irish. She averaged 15.5 points a game while often double-teamed, also leading the Irish with 12.5 rebounds a game, three assists and three steals.

“The family talks about basketball constantly, so it’s very important as far as to them,” head basketball coach David Nelson said. “If you look at it, the intensity is certainly there. Lilly I think has taken it to another level and beyond the others.”

Finishing out her career with the Irish, Isenhour made a charge toward state track. She ended up qualifying in both the shot put and discus and came in with a fifth place finish in the Class 1A discus.

“It’s been so fun,” Isenhour said after wrapping up the state meet. “We both have the biggest, supportive families and they’re at everything and they’re screaming. It’s been everything we wanted it to be.”

ALLIE MEADOWS, CENTRAL DEWITT Basketball was her sport, but Western Illinois-bound Allie Meadows made some noise in multiple sports at Central DeWitt High School, making her another finalist for the Clinton Herald Athletic Performers of the Year (CHAPY) Awards Female Athlete of the Year.

“I don’t care what size school you are, to have two Division I players in your program for four years is outstanding,” DeWitt head basketball coach Justin Shiltz said. Both Meadows and teammate Taylor Veach signed to continue to play basketball at the next level. “And those types of players, if they’re good players and work hard they’re going to leave a legacy. They certainly have at our school.

“The legacy they leave behind, what I witnessed this year, I haven’t seen two players who have that type of work ethic. It’s just off the charts. I hope it’s embraced by all of our girls across the board moving forward.”

Meadows is continuing her basketball career at the collegiate level after helping the Sabers to state for the second straight year. She is one of the Clinton Herald’s Basketball Player of the Year finalists and earned her spot as one of the best in DeWitt history along with some of her teammates.

“It was awesome,”Meadows said after signing. “It’s been a day I’ve been looking forward to since I was a little girl. Me and Taylor [Veach[ have always had that dream and we’ve always wanted to do it together. That day, and doing it together, it meant the world.”

Meadows was the leading scorer with 16 points a game, also finishing with 53 steals on the year and just 33 turnovers. She shot 50 percent from three-point range, draining 129 her senior year.

She worked beyond basketball, too. Meadows was the setter for the Sabers, who ended their season in the Class 4A substate game at North Scott this year. She led the team with 353 assists on the year while also digging up 128 balls in the back row. Meadows also served 74 aces on the year.

Meadows capped it all off with another state appearance. She was one of just two state qualifiers for the DeWitt girls’ track team, making in to the Blue Oval in the 400-meter dash.