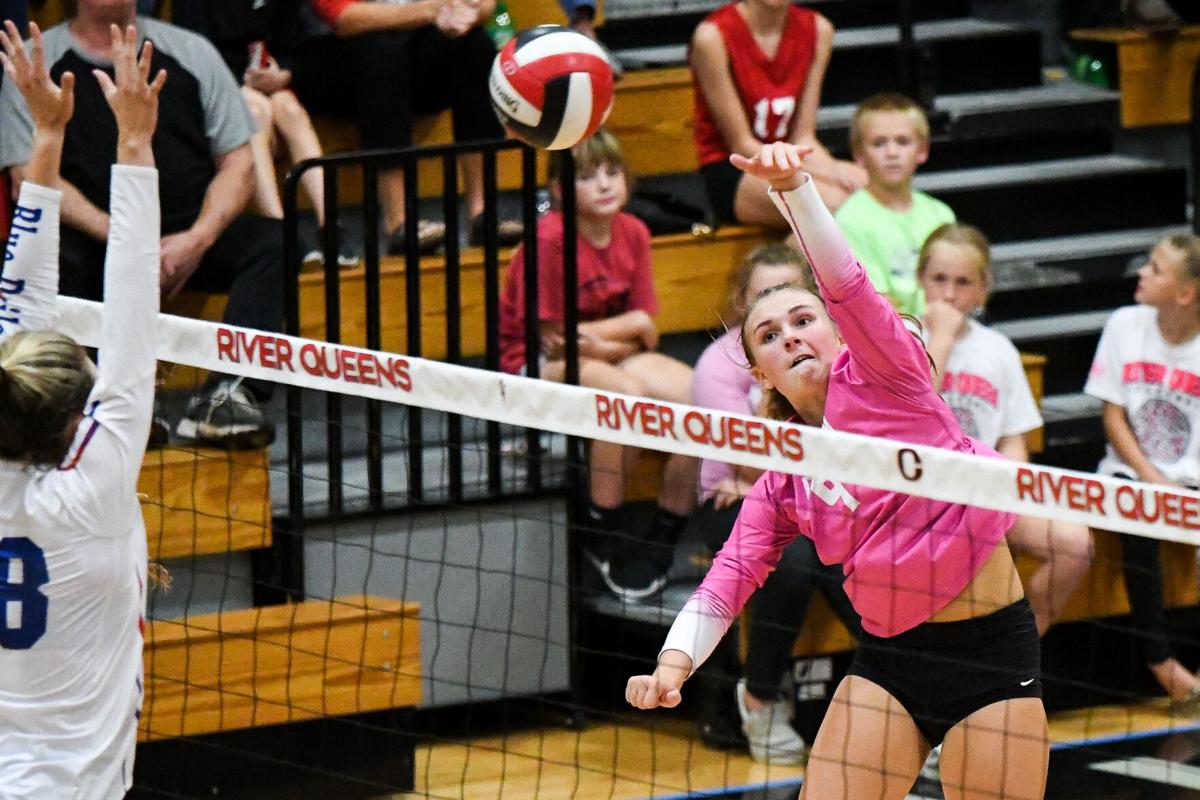 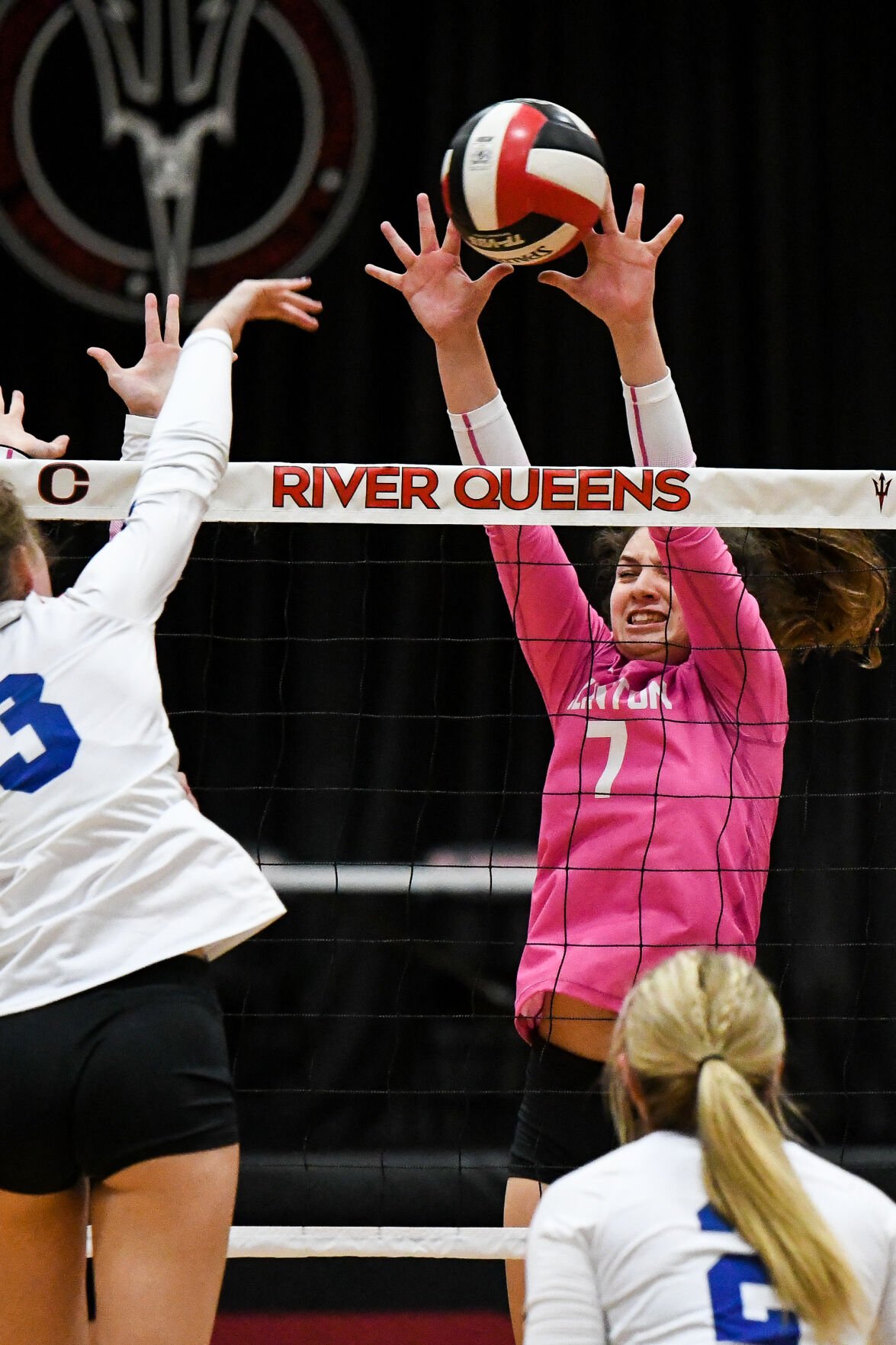 Clinton’s Tess Ferguson goes up for a block during Clinton’s loss to Davenport Central Tuesday night. 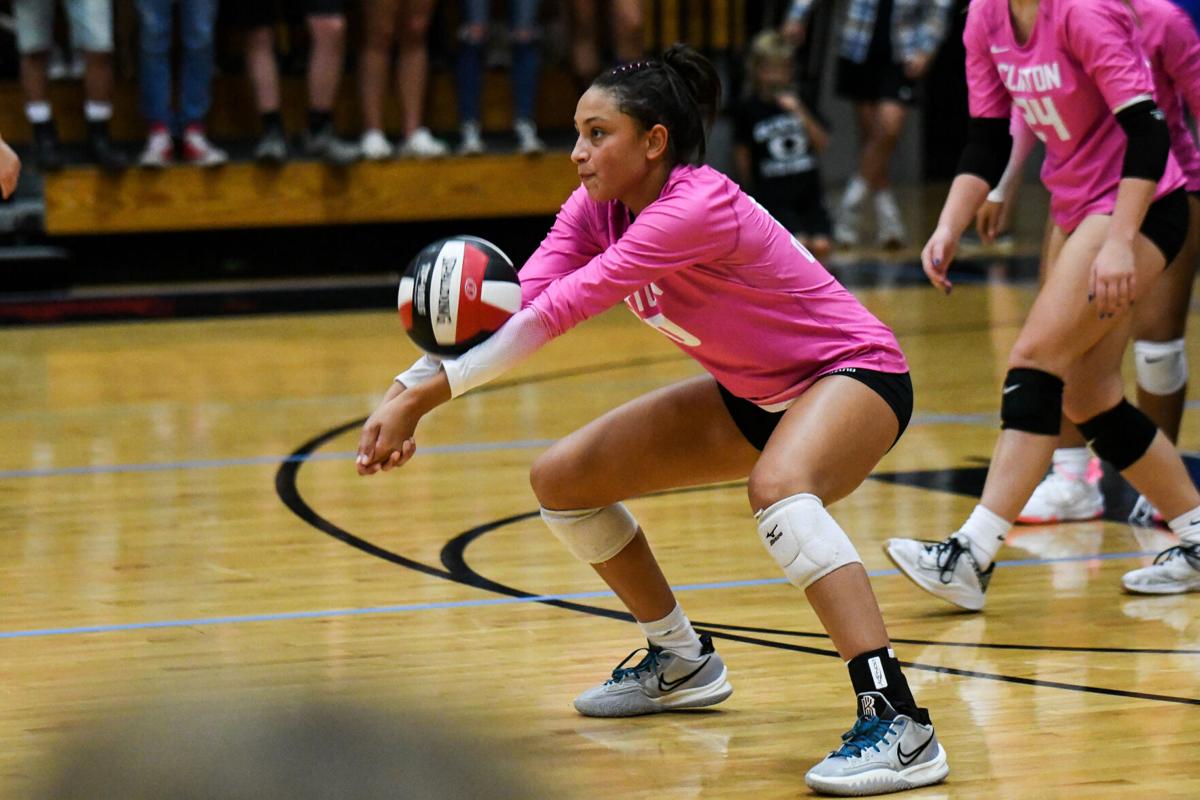 Clinton’s Tess Ferguson goes up for a block during Clinton’s loss to Davenport Central Tuesday night.

CLINTON – With a final diving attempt from the Clinton back row, a Davenport Central attack hit the floor and ended the Mississippi Athletic Conference contest at Yourd Gymnasium Tuesday night.

“We knew coming in that they were a scary team, an athletic team,” head coach Micah Cewe said. “They showed that tonight when they were in system and swinging.”

After winning the third set, the Queens fell behind by eight points in the fourth. A huge comeback effort looked like it might be successful with the River Queens pulling within just two points, 20-18.

Davenport Central managed to hold Clinton off to end the MAC game.

Clinton had leads at various points in all but the fourth set Tuesday night. However, the Queens got stuck in rotations time and time again that sent the Blue Devils on scoring runs that erased the leads they had garnered.

“A lot of it is mental,” Cewe said. “When we lose a couple points, we need to remember short term memory loss. You want to forget what just happened.”

In Set 1, the Queens had a five point lead in the middle of the set, only to see the Blue Devils take a lead at 18-17. A four point run from Central ended that game.

In Set 2, Clinton played from behind but took a 15-14 lead on a kill from Makayla Howard. The Queens cut close but another 3-point streak from Central ended the second set.

“For the most part we played well as a team, but there were definitely times where we fell off. We need to find a way to come back, work together and put the ball away.”

Set 3 was the only victory of the night for Clinton. Down by three, they had to battle back into the game.

Tess Ferguson leaped for a tip over the block to tie the game at 21-21.

The next play, a set falling tight to the net was pushed off the Central block by Payton Luett to give Clinton a lead.

“I think we needed to roll and tip to get the ball over,” Luett said. Luett had eight kills on the night. “We needed our backrow today to let us know where the block was.”

Makayla Howard put away an overpass and then Trinity Smith served an ace to give the Queens set point. Howard ended up leading the offense with 17 kills, while Kailyn Graves put away 14.

It ended with Davenport Central illegally playing a ball over the net.

The middle blockers had a good night at the net for the Queens, including three solo blocks and two assists by Tess Ferguson.

“I think when we changed Tess into the rotation we started trusting each other more and our block flowed together more,” Luett said. “It was really important, just to switch it up and read the block better.”

On the outside, the block struggled to set up against some powerful Blue Devil swings. The Central outsides found holes around the outside block consistently.

“Our middles were focusing on facing the other middles,” Luett said. “When it was out to the pins, it was harder for our middles to get over because they were so focused on their middles.”

The touches off the block also gave the Clinton defense fits Tuesday night. Many swings were tipped by the Clinton block only to fall directly behind it.

“Our blockers, they got a lot of soft blocks,” Greenwalt said. “We definitely need to cover more and get there on defense and that’s something we’re going to push into the next game.”

Makayla Howard also led in the back row with 20 digs for the Queens. Jamie Greenwalt had 10 and Ashtyn Dohrn added another nine.