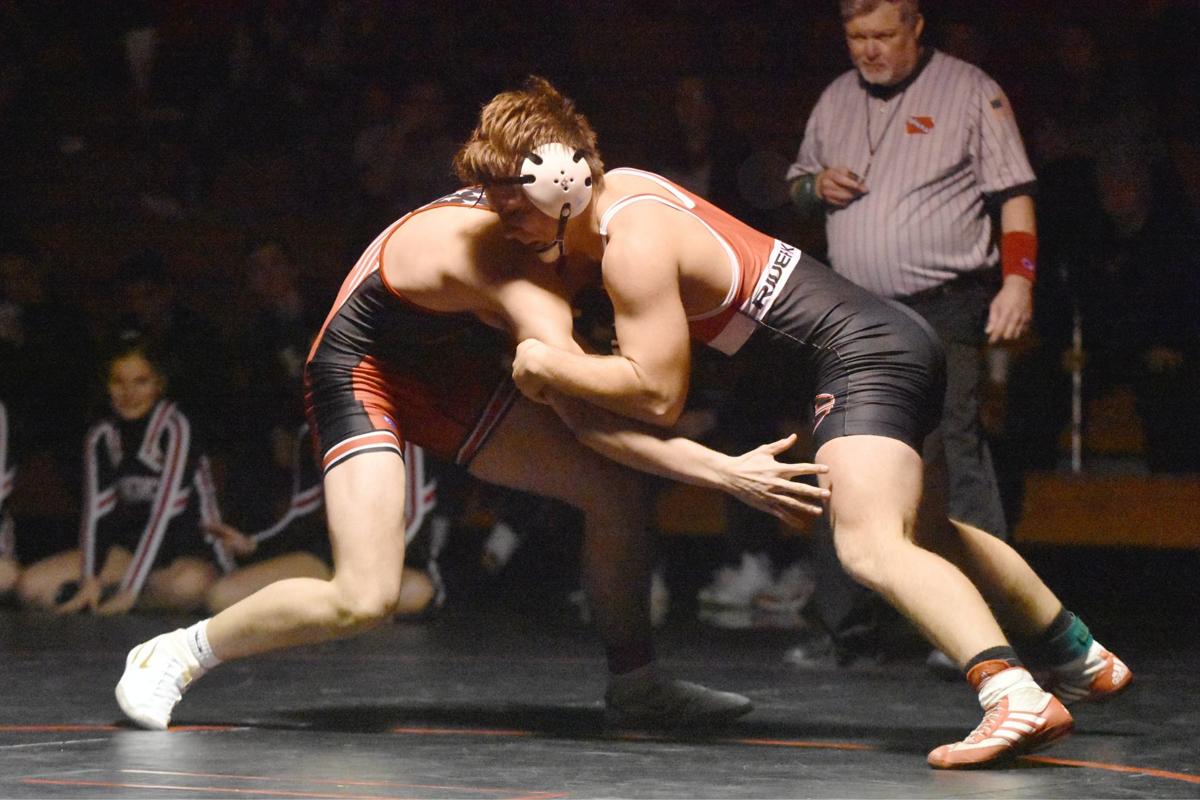 Clinton senior Jasper Luckritz starts his match against Assumption’s Logan Schimanski before he went out due to injury on Thursday night. The River Kings fell 61-12 to Assumption but beat Burlington in the double dual. 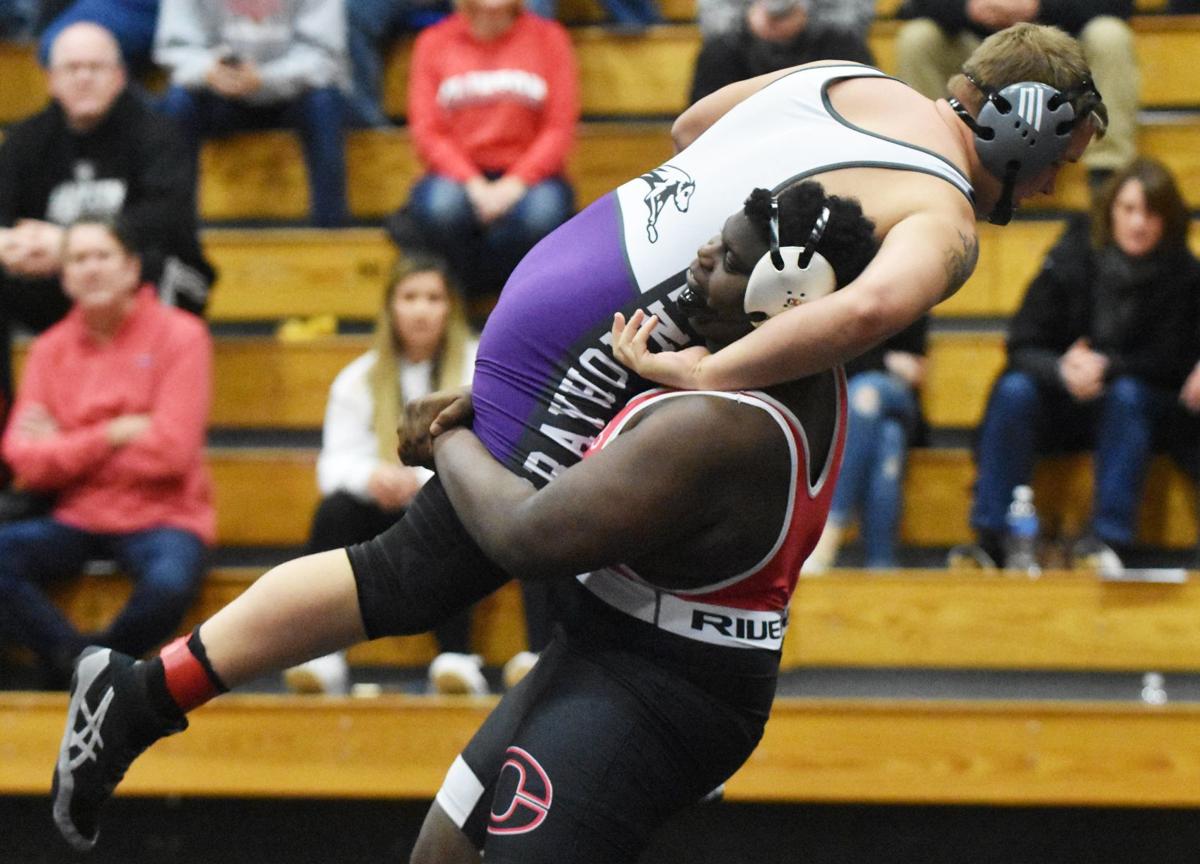 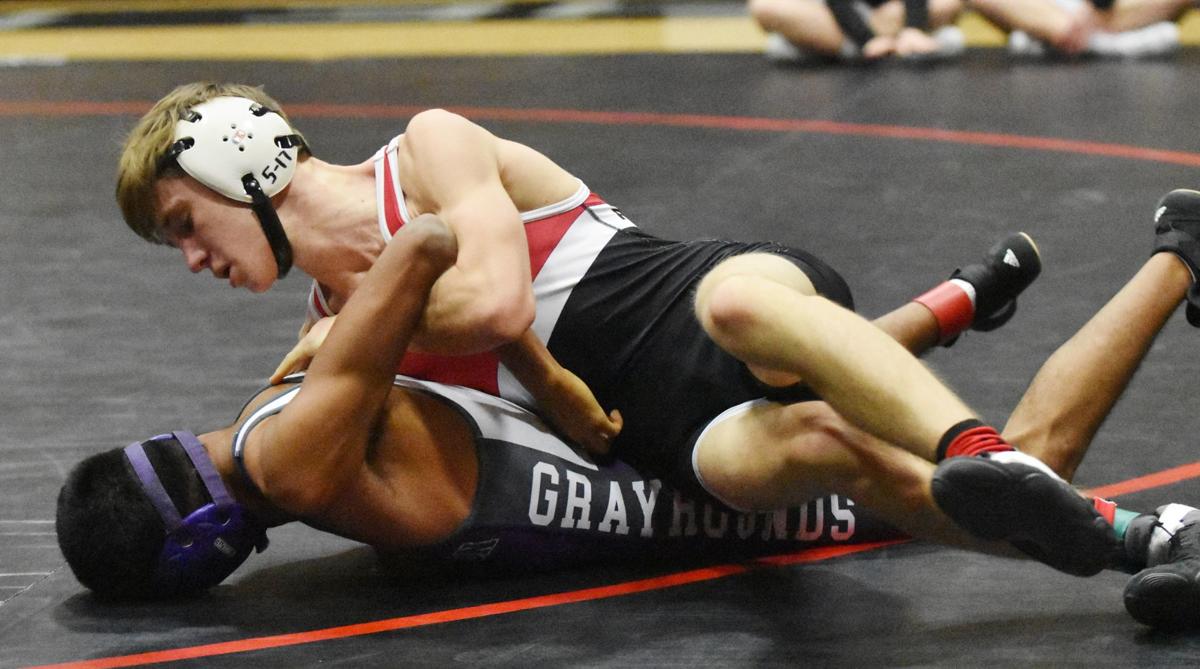 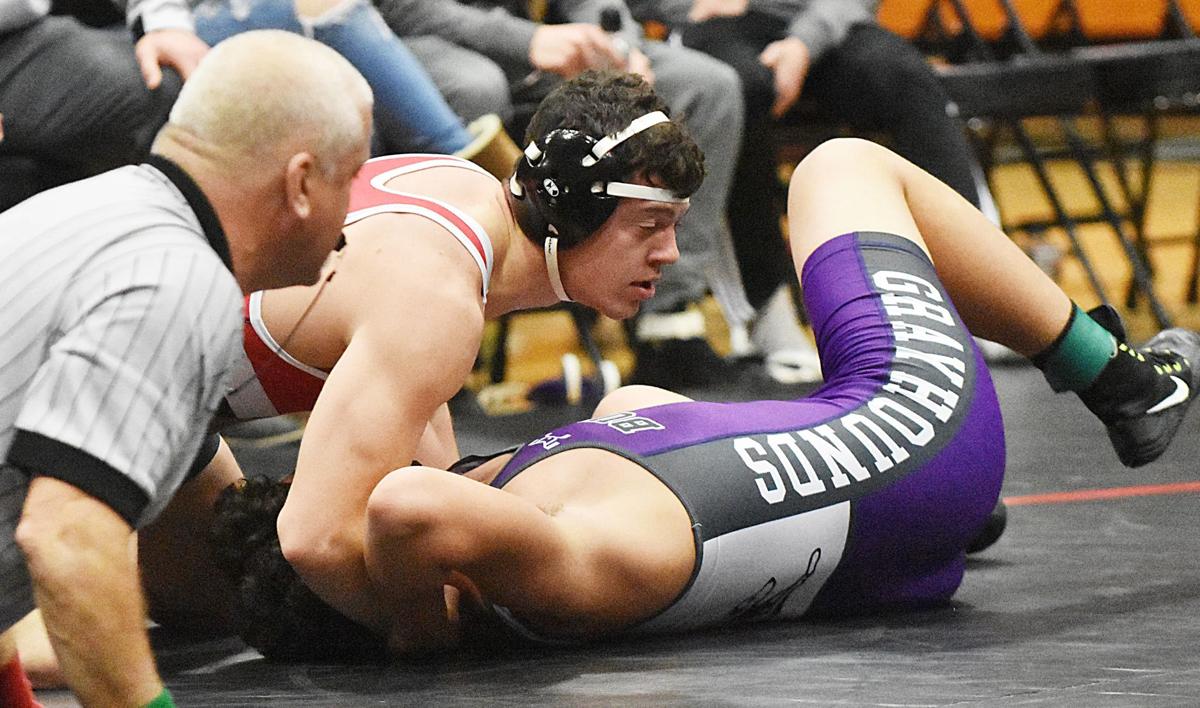 Clinton senior Trevor Bitner gets a takedown right before winning by fall over Burlington’s Julian Perez-Hall on Thursday night at home.

Clinton senior Jasper Luckritz starts his match against Assumption’s Logan Schimanski before he went out due to injury on Thursday night. The River Kings fell 61-12 to Assumption but beat Burlington in the double dual.

Clinton senior Trevor Bitner gets a takedown right before winning by fall over Burlington’s Julian Perez-Hall on Thursday night at home.

It was the first wrestling meet at Yourd Gymnasium this season, and the team honored their seniors before the beginning of the night.

The Kings started their night with the Grayhounds, defeating them 46-34.

“It wasn’t the best we’ve ever wrestled, but a win’s a win,” head coach Dustin Caldwell said. “With 14 guys, it’s tough to do. We had 10 or 12 guys do their job but others left there’s hanging around.”

The River Kings started out with a couple of rough matches, and then were led by a senior quartet to jump ahead in team points. First Jasper Luckritz pinned Nolan Simpson in 1:03 and then Trevor Bitner pinned Julian-Perez-Hall in 42 seconds.

To top off the string of wins by fall, Hunter Randall came out and pinned Daniel Remele in just 12 seconds.

Charles Burrows then came out and battled against Jacob Peterson, eventually getting the pin at 2:31. That win proved crucial down the stretch with just a 12-point win.

“If Charles hadn’t pinned his kid, we might lose the dual,” Caldwell said. “It takes everybody, and for the most part we fought pretty well.”

Luke Jennings won by major decision as well, while Andrew Brisch also picked up a pin.

The dual against the Knights was a different story. The River Kings lost that one 61-12, those 12 points coming only when Assumption forfeited the weight group.

“We just came out really flat,” Caldwell said. “It sucks that this is the only home dual this year. For the most part, we knew Assumption was a good team but we wanted to compete in all 14 weight classes. Sometimes it doesn’t work that way.”

It wasn’t all quick pins for losses, though. Jasper Luckritz didn’t get to see where his match went, heading off the mats due to injury.

Trevor Bitner jumped out to an early lead, but had to battled Knight John Argo for the full three periods, eventually falling 7-6.

Ashten Corbin, who was pinned against Burlington, had a slow start against Assumption’s Ethan Forker. Corbin bounced back though, escaping in the last 20 seconds to pull within one point. He couldn’t pull out another move on Forker, though, and fell 4-3 to end the night.

“I’m proud of their fight there,” Caldwell said. “We just need to get to our offense quicker. We tweak one or two things and we could have the pins in those.”

Because it’s the Kings’ only home dual of the season, they had Senior Night before the matches started. Caldwell has a large number of freshman and underclassman on his varsity squad this year, making his senior class ever more important on how the program will progress from here on out.

“We have a great group of guys. For them, they have to set the standard,” Caldwell said. “They have to be here every day, be the hardest workers in the room and be leaders. That’s what these freshman are taking from them.”

The River Kings go on the road this Saturday, crossing the Mississippi River for the Sterling Invitational. Joining them there from the area will be Camanche and Fulton.

CASCADE – The Camanche wrestling team split duals on Thursday night, falling to Wilton while defeating Cascade on the road.

In that dual loss, four Indians still picked up pins.Ben Vogel won at 120, pinning Dalton Snider in 3:08. Eric Kinkaid took the crown over Blake Conklin in 1:24 with a pin.

Against Cascade, the Indians rolled to a 58-21 dual team win.

Ethan Benavides pinned Like Ludwig in 1:52 for six points, while Eric Kinkaid had his second of the night.

Logan Waltz got the job done in just 54 seconds. Luis Marquez rounded out the pins with a pin of his own in 43 seconds.

The Indians go to Sterling on Saturday for an invitational, competing against a lot of local teams.