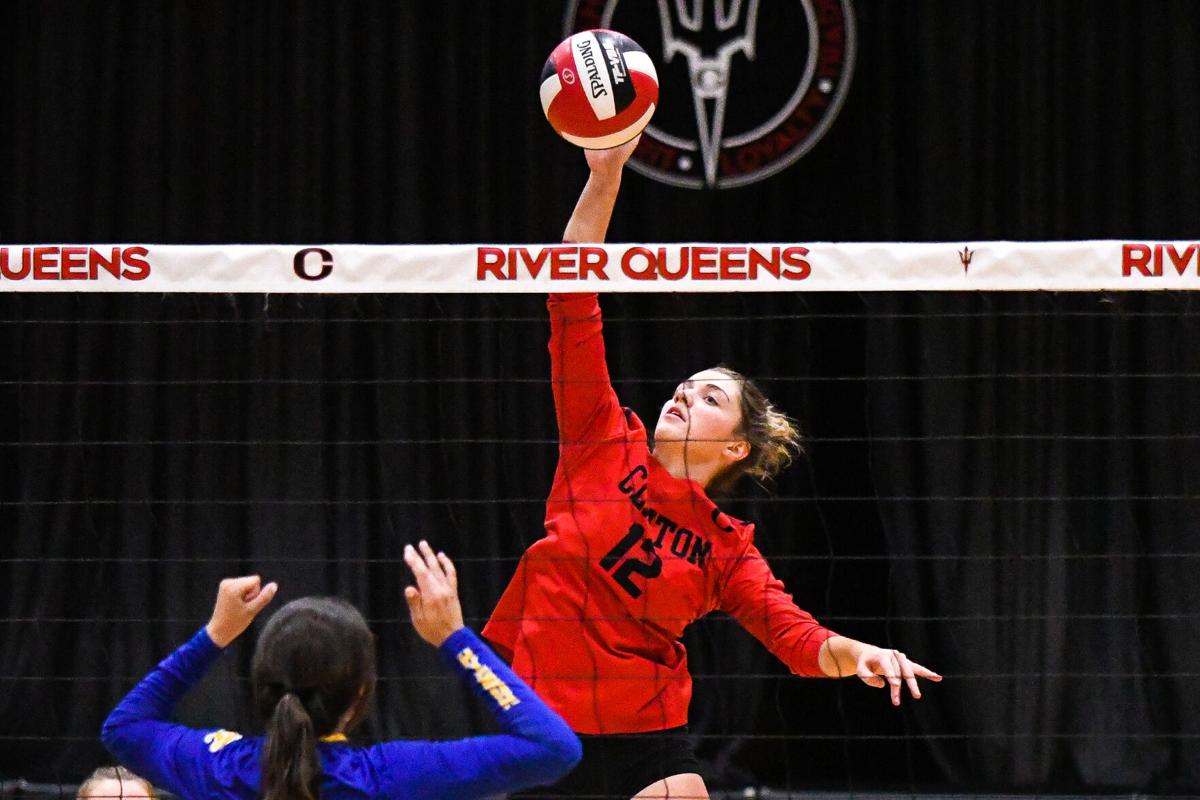 Clinton’s Megan Kelly swings at a ball during the River Queen’s three game sweep of Davenport North on Tuesday night at home. 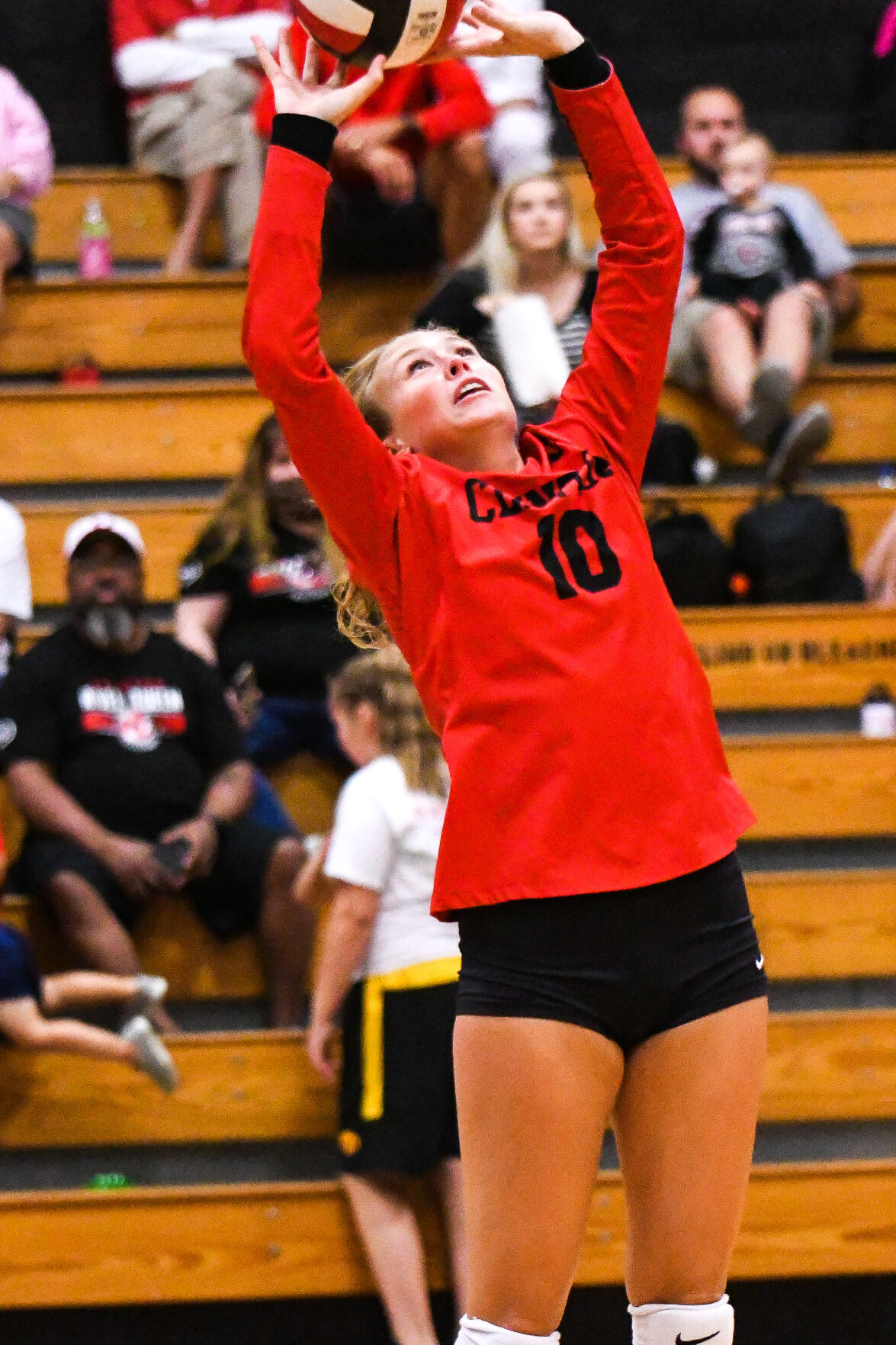 Clinton’s Jamie Greenwalt sets up a ball during the River Queens’ MAC win over Davenport North on Tuesday.

Clinton’s Megan Kelly swings at a ball during the River Queen’s three game sweep of Davenport North on Tuesday night at home.

Clinton’s Jamie Greenwalt sets up a ball during the River Queens’ MAC win over Davenport North on Tuesday.

CLINTON – It was a dominant win for the Clinton volleyball team on Tuesday night in front of their home crowd to help kick off homecoming week for Clinton High School.

The River Queens rolled Davenport North in a 3-0 conference sweep in their second home game of the year. The Queens beat the Wildcats 25-11, 25-9, 25-11 in Mississippi Athletic Conference play.

“There are no easy games in the MAC,” head coach Micah Cewe said. “We still had to come out here and play tonight, we had to play hard to win in three.”

The Queens were back at Yourd Gymnasium for the first home conference game since Aug. 24. After a weekend of tough volleyball at their own invite, the win was a much-needed energy boost for the River Queens.

The dominant play started from the get go, a fast start setting up the rest of the night.

“It doesn’t matter who you’re playing, you should always keep your energy up, keep you intensity up,” Cewe said. “I thought we did a pretty good job of it tonight. As a coach, you always want more talk from your players.”

Makayla Howard ended the night in double-digit offense with 11 kills on 19 attempts. Megan Kelly had eight and Payton Luett added six to the mix.

The defense picked up quite a bit with the Wildcats throwing plenty of strange hits over the net towards the back row.

It gave Cewe the opportunity to play members of the varsity bench who haven’t seen as many minutes this season.

“It was very important to get off to a quick start and I know we did that in all three games,” Cewe said. “That was great, we built momentum there and then we had that opportunity to play kids. They’ve worked hard in practice, and we want to get those kids out there because they’re part of our program and part of our team.”

Tess Ferguson had a kill, as did Tiffany Greenley and Trinity Smith.

The Queens also knocked out nine aces. Three came off the serves of Megan Kelly and three from Makayla Howard. Jamie Greenwalt, Mya Price and Payton Luett all recorded aces as well.

The MAC schedule for the River Queens definitely doesn’t get any easier as October rolls near.

“We’ve played a lot on the road, and we’ve played four weekend tournaments in a row,” Cewe said. “It was nice to be able to play at home and have a little time off after this.”

Clinton (8-14) will continue in MAC play, taking on ranked Assumption (Class 3A No. 2) in a week on their home court. Clinton plays three more home games before going back on the road in October.

The one thing Cewe is looking for from his team still is a consistent level of play. He saw some back-and-forth over the weekend at their home tournament, and knows that it won’t work as Mississippi Athletic Conference play continues. The MAC has four ranked teams – No. 1 North Scott (4A), No. 2 Assumption (3A), No. 3 Pleasant Valley (5A) and No. 14 Bettendorf (5A).

“We need to play more consistent,” Cewe said. “This weekend, we played well against [Dubuque] Senior and then when we played Assumption, we didn’t show up. We go to them next Tuesday and we need to show up.”

“We have to always control it on our side,” Cewe said. “There’s going to be times on their side when they throw some uncontrolled stuff at us, offspeed stuff. We have to play fast, we have to stay focused.”