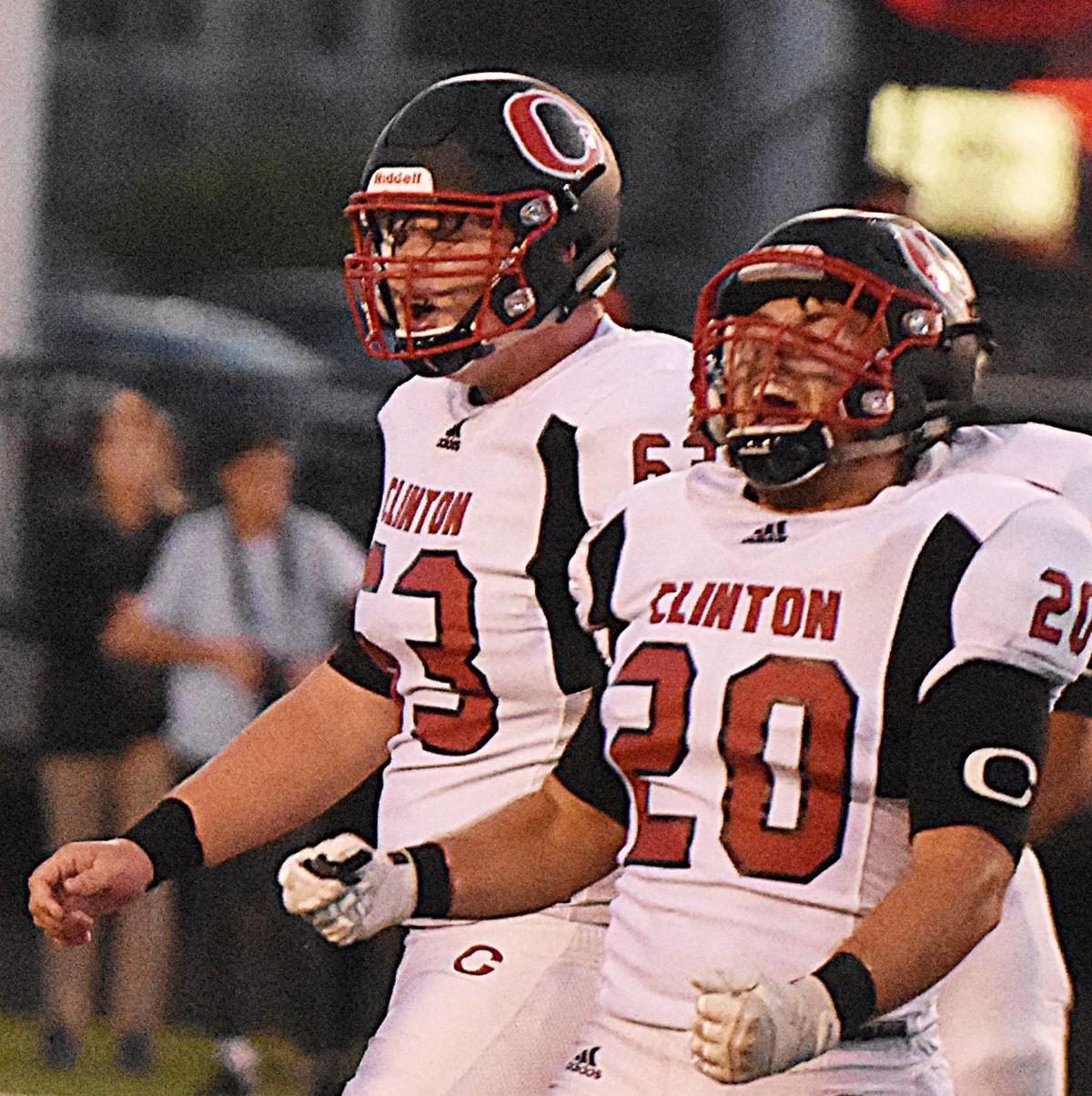 Seniors Jasper Luckritz (20) and Noah Howard (63) react after a fumble recovery during a road game this season. 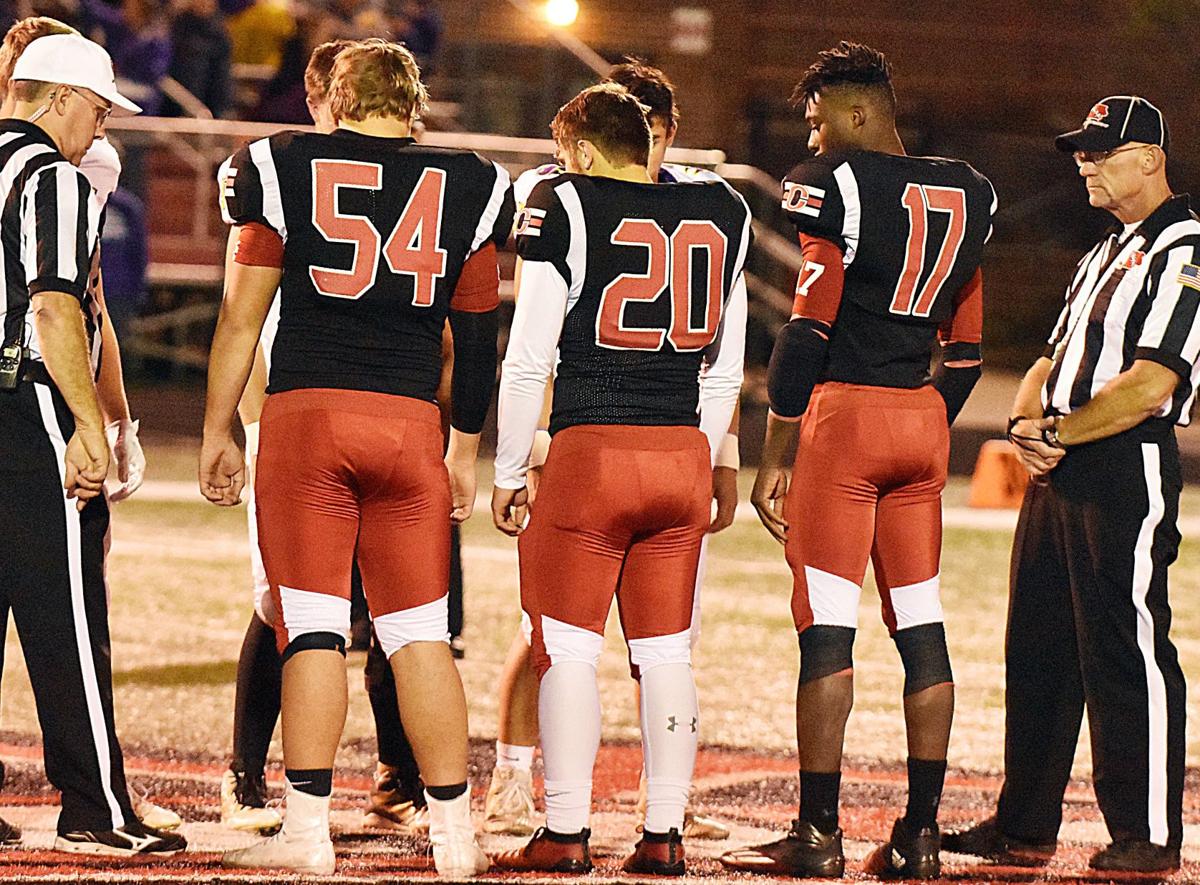 Seniors Jasper Luckritz (20) and Noah Howard (63) react after a fumble recovery during a road game this season.

The storyline of the Clinton season certainly has been focused on the youth. With a handful of talented sophomores helping fill the varsity roster, it’s setting the stage for an exciting turnaround in the Clinton program.

But the young ones have to learn from somebody, and the Clinton seniors are working on building that foundation.

The River Kings are 0-8 heading into their last regular season game, having some notable struggles on the field.

It was kind of what the seniors knew was going to happen this year, especially with the inexperience filling the team.

Even though they never expected to come out and win the district, they know what kind of season they wanted to have.

“We expected to not be that big physically ... but we expected that we could work our butts off every day and see others follow us,” senior Jasper Luckritz said. “And hopefully put something together worth showing the community.”

Luckritz joins a group of 12 seniors who have a clear connection on the field. They’ve been close and they’ve stayed close.

That included when they lost two members of their class last year. Both Ethan Barry and LJ Henderson transferred high schools before senior year got going. According to the River Kings, that just taught them to be closer as a football family.

“At the beginning of the season, with them leaving it made us come closer together,” senior Noah Howard said. “Be a better team.”

Howard and Luckritz, along with Jamie Miller, make up key parts of the River King defense. Along with other seniors helping them out (like Ulysses Patterson, Hunter Randall and Trevor Bitner), their defense has made some incredible stops at times this year.

“Our main focus on defense has been flying around, knocking heads into the dirt, giving it 100 percent every play no matter what the score,” Luckritz said. “The main thing is that we focus on how hard we go.”

It’s all been about work ethic for the seniors. That’s what they want the sophomores to take away from them as leaders.

“One of the things we really tried to instill in all the guys is keeping a positive mindset and trying to get better every play, every practice,” Luckritz said. “Hopefully that will continue next year when we’re gone, getting better.”

It’s been a frustrating season at times for sure. It always is when you’re losing.

But ... you can see where the seniors’ personalities come out at the tail end of games. The River Kings have lost six of their eight by 38 points or more. Even when they’re down by double digits or see the continuous clock ticking, they’re still on the field giving it their all until the final buzzer.

They’ll still celebrate a sack, even when they’re down 42 with two minutes remaining. They’ll still be running hard towards the goal line, even if another touchdown won’t make a shred of difference.

“We’ve been through this for a couple years,” Miller said. “We’ve lost a lot. We don’t get down that we’re losing by 45 points. That makes us keep going, keep going, show them what we got.”

Miller and Howard are planning on playing football at the collegiate level, heading to Iowa Central College to stay teammates for another season at least. They’re even trying to convince Luckritz to join them, although he’s undecided about college plans.

What they are all certain of is that they want to leave something behind for the youth coming through the Clinton football program.

“I think what I want them to learn from us is they need to bring leadership to the team and be as one. There is no “I” in team,” Miller said. “We want them to remember us as leaders and as a part of their team.”

They also want the sophomores to remember how a winless season feels and to get better from it.

It’s something they’ve already learned from themselves.

“One thing I’ll take away is the process of trying to get better,” Luckritz said. “Something I really want the underclassman to take away is the taste and how this feels and having that motivate them for years to come.”