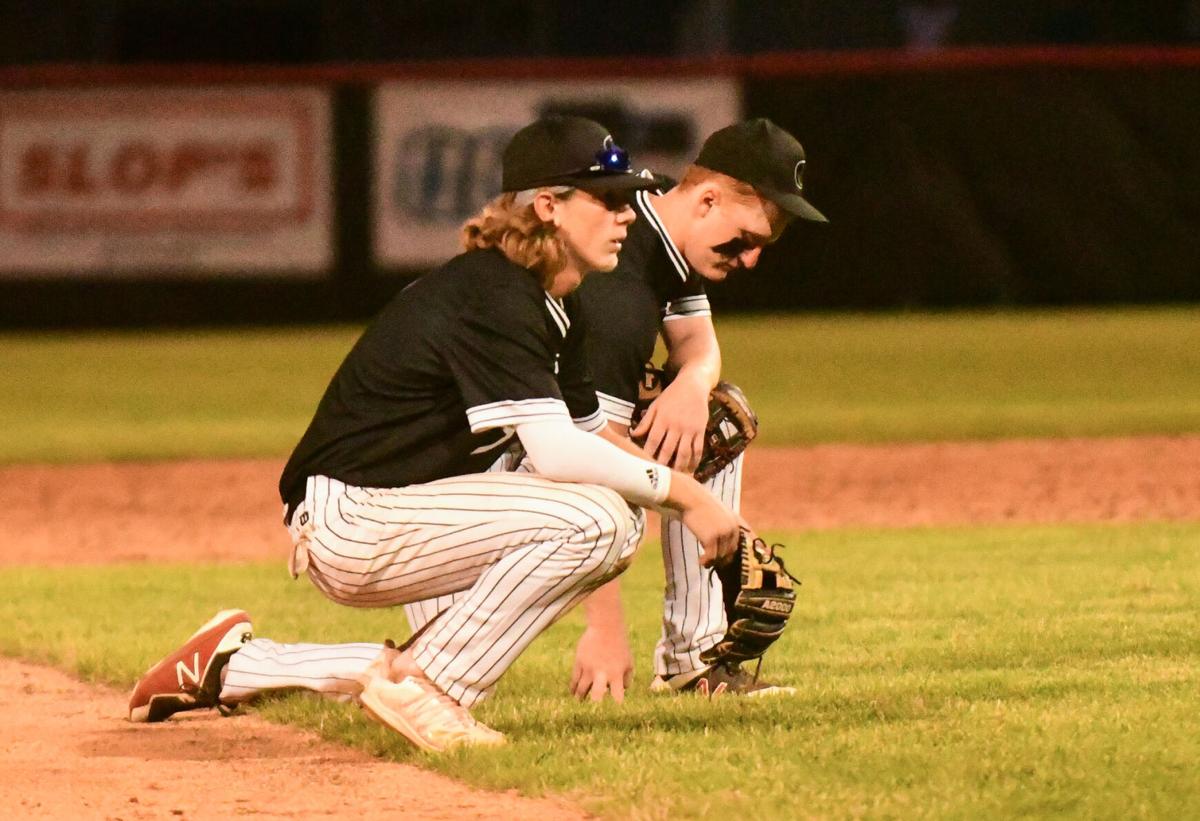 Clinton’s Max Holy and Logan Mulholland look on as Tavian Bailey warms up in the top of the seventh after the River Kings lost a lead to Prairie, eventually losing 12-2 to end their season. 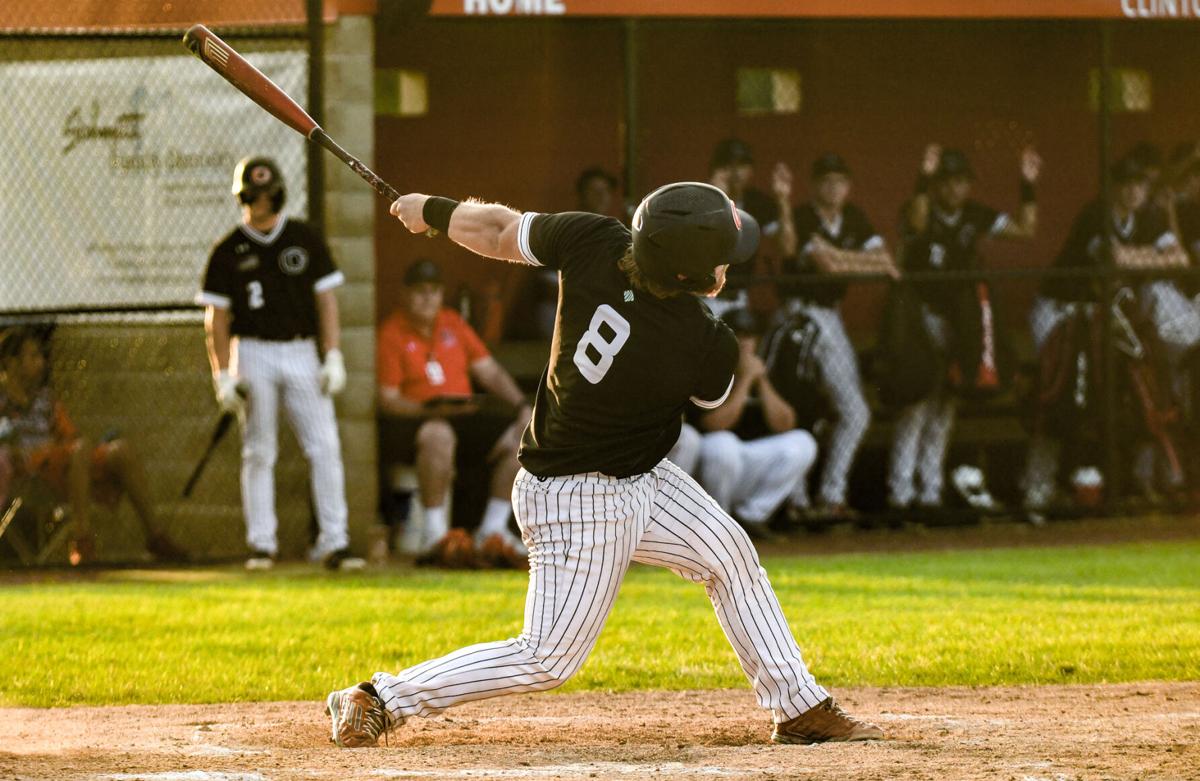 Clinton senior Jasper Luckritz swings during an at-bat for the River Kings on Friday night. The Kings lost 12-2 to the Cedar Rapids Prairie Hawks to end their 2020 campaign. 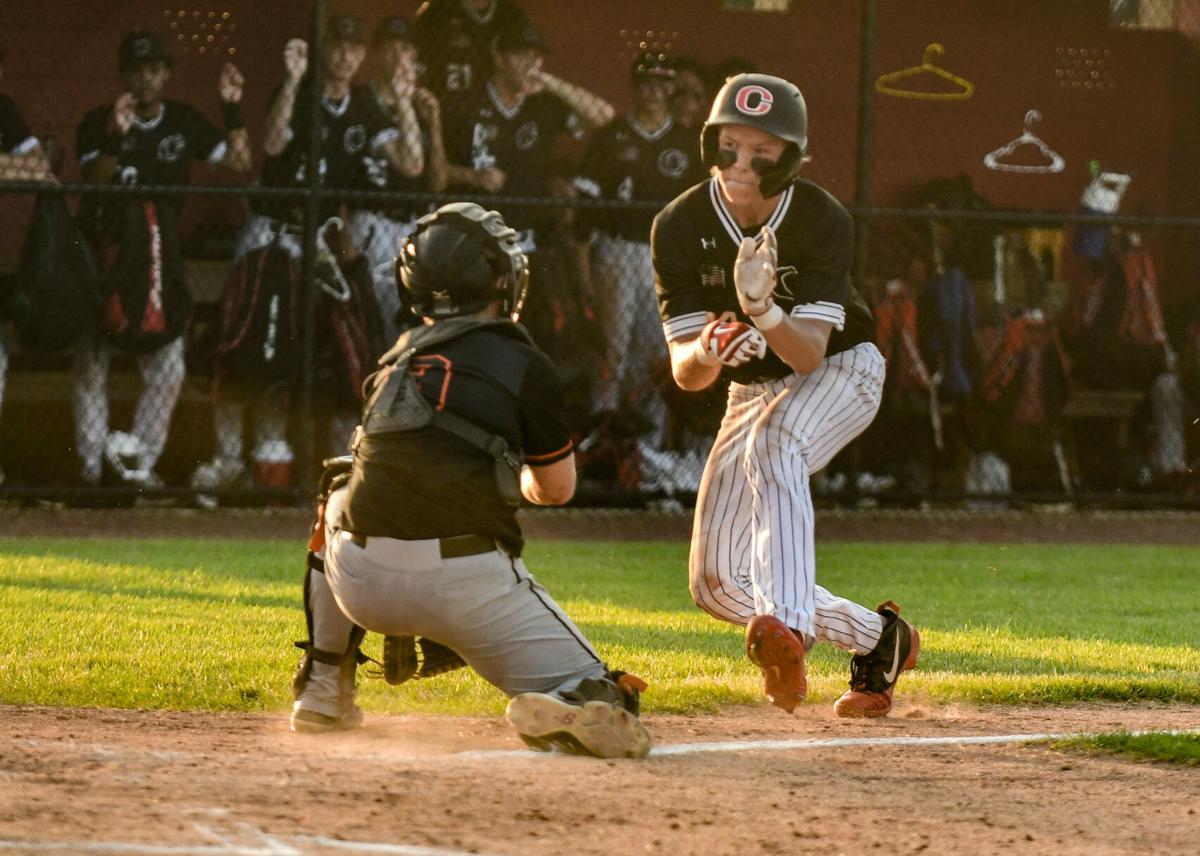 Clinton base runner Addison Binnie prepares to slide into the Prairie catcher, eventually being ejected for the play, during Clinton’s substate game against the Hawks on Friday night.

Clinton’s Max Holy and Logan Mulholland look on as Tavian Bailey warms up in the top of the seventh after the River Kings lost a lead to Prairie, eventually losing 12-2 to end their season.

Clinton senior Jasper Luckritz swings during an at-bat for the River Kings on Friday night. The Kings lost 12-2 to the Cedar Rapids Prairie Hawks to end their 2020 campaign.

Clinton base runner Addison Binnie prepares to slide into the Prairie catcher, eventually being ejected for the play, during Clinton’s substate game against the Hawks on Friday night.

CLINTON – There wasn’t much that Clinton baseball coach Kevin Cunningham could say after a 12-2 loss to Cedar Rapids Prairie on Friday night at home. Afterall, his team had the lead heading into the final inning before Prairie came surging back.

The Hawks put 11 runs on the board in the top of the seventh to knock the River Kings out of the first round of the Class 4A Substate 4 bracket.

“Shocked,” Cunningham said. “Just shocked. We were in charge of that game, we were in control the whole game. Three outs, that was the difference. We fell apart.”

Two errors and a walk started the inning, immediately evening the score 2-2. All of a sudden, the 0 outs on the board looked daunting and the Clinton defense got tense.

Another fielding error, the third of the inning, and the Hawks took a 4-2 lead.

From there, Prairie just strung together hit after hit off both of Clinton’s relievers – Jace Howard and Tavian Bailey. They ended with 14 total hits off Clinton pitching staff, scoring 11 runs in their final offensive showing. The River Kings were also playing without second baseman Addison Binnie.

“Errors and Addison getting ejected changed things,” Cunningham said. “He’s been a leader for us all year and it just kind of changed the dynamic in the dugout.”

Clinton managed one base runner in the bottom of the seventh, but senior Max Holy was left on the field alone as the final out was made at first.

Clinton struck first, scoring in the bottom of the second. Senior Zach Hoffman drew a walk, and he rounded third on a single down the right field line from sophomore Seth Dotterweich to five the River Kings a 1-0 lead.

A little bit later in the game, Addison Binnie tried to run home from second and made illegal contact with the catcher in the process. Binnie was ejected, taking out a .324 batter and an important defensive piece from the lineup.

“It could have gone either way, but unfortunately he got rang up,” Cunningham said. “That made a big difference. We would have scored that run because the throw was wild, now we have runners on first and third with one out.”

Prairie evened the score once more in the top of the fifth. In the home half of the inning, however, the Kings found a response. Joe Simpson started the inning with a single, stealing second base. Freshman Ian Thomas, who replaced Binnie in the lineup, laid down a bunt. The bunt dribbled short and flustered the Prairie defense into a throwing error. That left Thomas at second and scored Simpson easily.

“Ian Thomas stepped in and did a great job for us,” Cunningham said. “I’m real proud of his efforts.”

The River King offense finished with five hits on the night, also drawing four walks. Still, they struggled to get batters around, leaving eight men stranded.

“I think it’s a little pressure,” Cunningham said. “I think pressure always goes up in a substate game, because you lose, you’re done. Their starter is a real good pitcher, too.”

“Great group,” Cunningham said. “Many have been around for five years, and I’m going to miss them. Great group of kids.”

Rebels advance to the regional final

GOOSE LAKE – The No. 4 Northeast softball team redeemed their 2019 regional loss on Friday night, and in a big way.

The Rebels had to play just five innings to take down the Blazers.

The Rebels got four runs batted in from senior Bree Mangelsen, who launched a 2-run homer in the bottom of the first. Makenna McDonald, Alexis Ehlers, and Valerie Spooner all had three hits a piece.

The Rebels move on to the regional final, taking place Monday night in Goose Lake. Regina will visit the Rebels for the regional championship game.

Sabers down Anamosa to start districts

DEWITT – The No. 3 Central DeWitt baseball team made quick work of their first round district opponent, taking out Anamosa 10-3 in Round 1.

Tucker Kinney, Nolan Haack and Noah Thein all had two hits for the Sabers, with 10 hits total drawing in the 10 runs.

Alex McAleer and Boomer Johnson took the brunt of the pitching for the Sabers, allowing four hits, three runs and striking out eight batters between the two of them.

The Sabers will host Round 2 on Monday night, welcoming Center Point Urbana to DeWitt.

CENTRAL CITY – After winning their first two postseason games, the Easton Valley softball team bowed out in the regional finals with a 12-0 shutout loss to Central City on the road.

The River Hawks were winless during the regular season but managed to down both Springville and Marquette in their first two regional games.

Central City, ranked No. 13 in Class 1A, scored six runs in the both the second and the fourth inning to take down the River hawks.

The River Hawks finish 2-8 for the 2020 season and lose just one senior, Calli Beck.