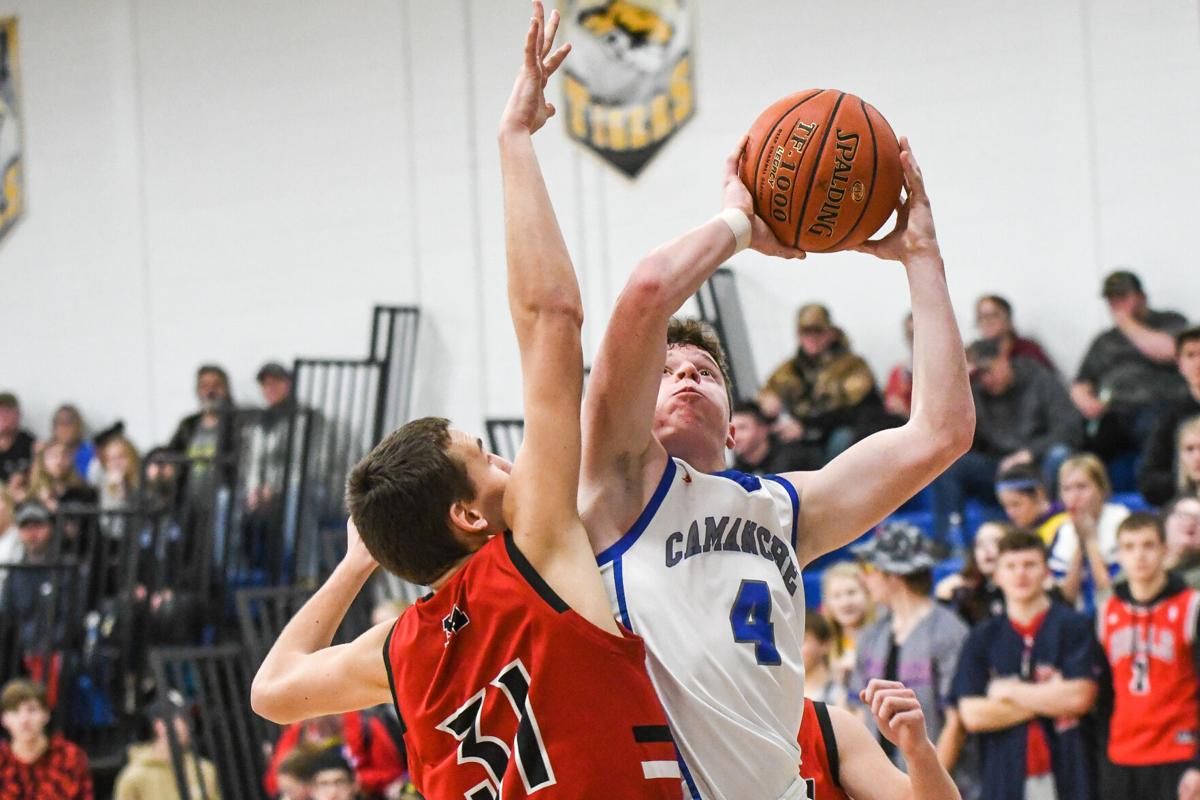 Camanche’s Tucker Dickherber shoots over Monticello defense during the Panthers’ win over the Storm on Tuesday, Jan. 11 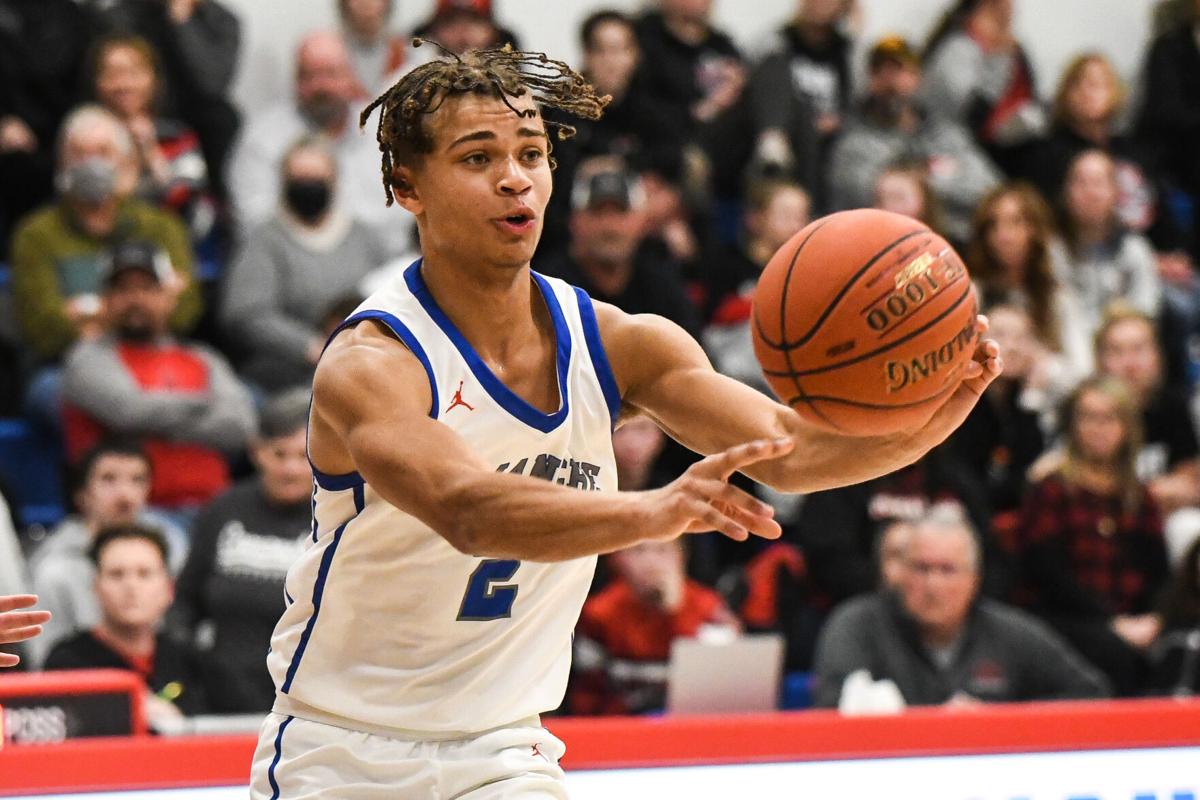 Camanche’s Adam Dunlap passes the ball during the Storm’s loss to Monticello on Tuesday, Jan. 11. 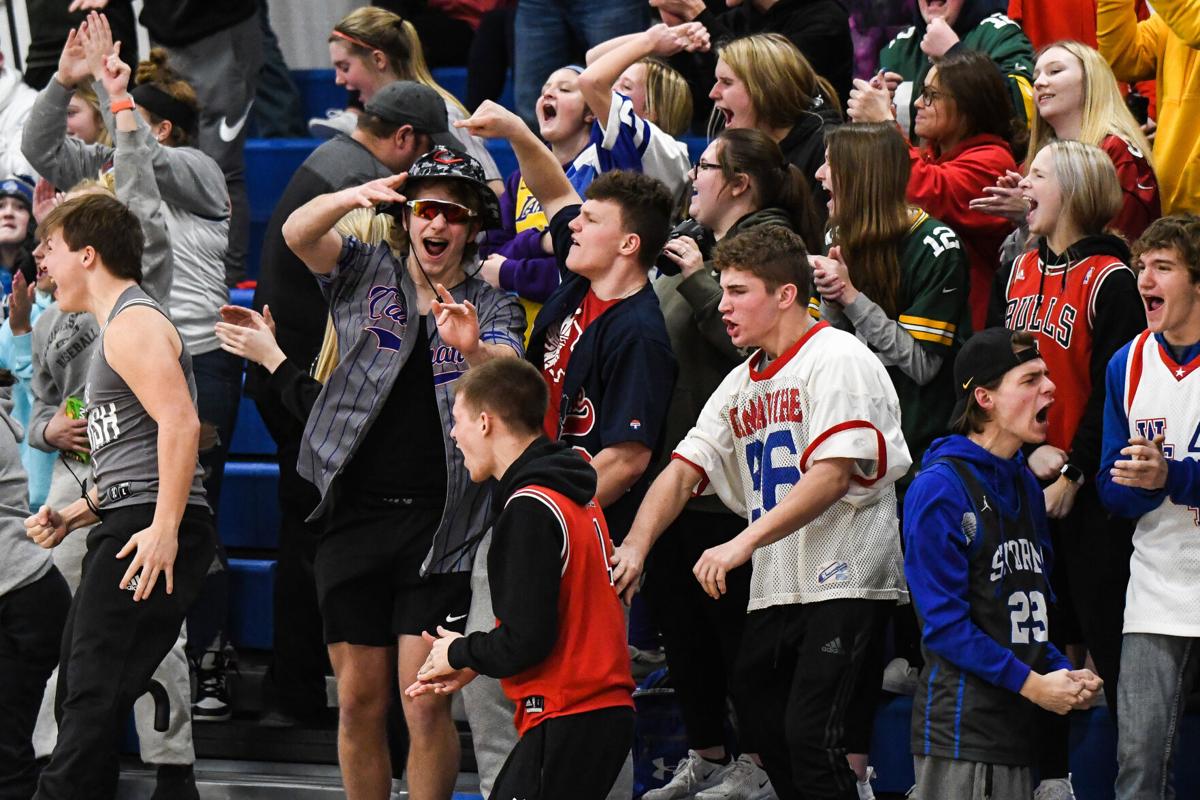 The Camanche student section reacts during the RVC game with Monticello on Jan. 11. 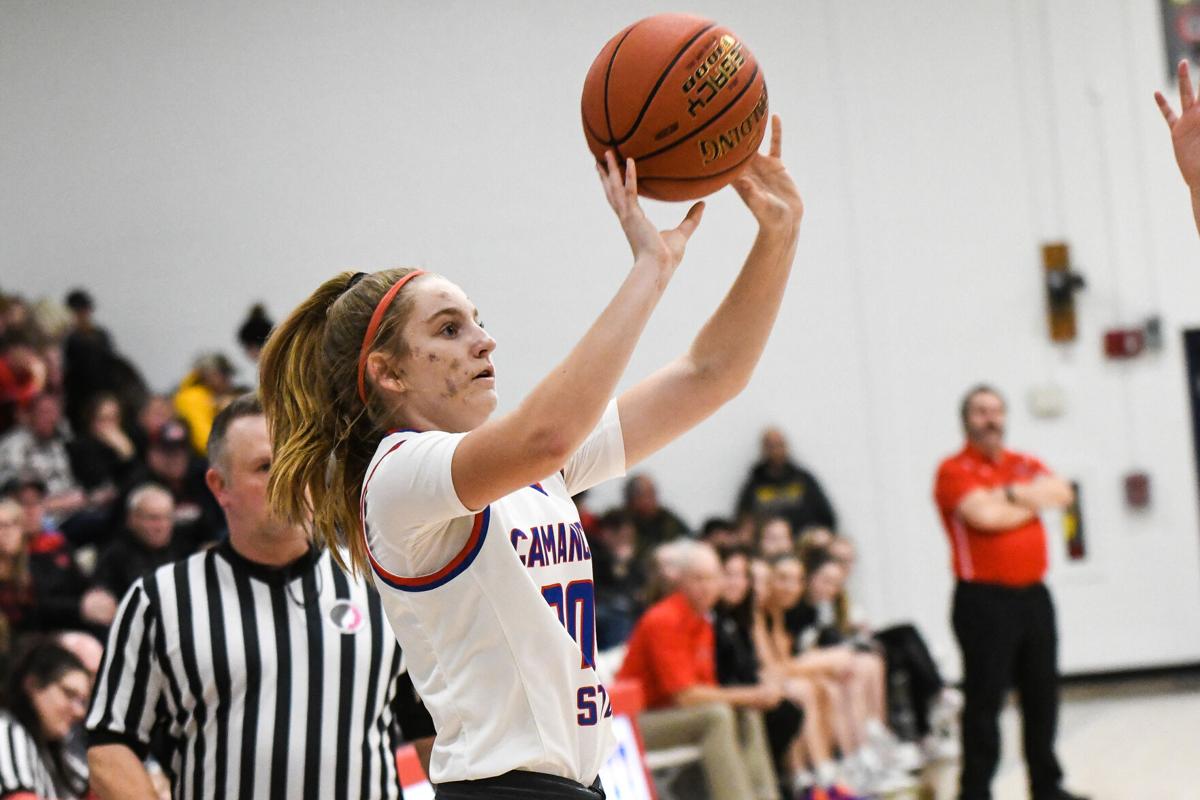 Camanche’s Miley Duritza shoots a three in the corner during the Storm’s loss to Monticello on Tuesday, Jan. 11. 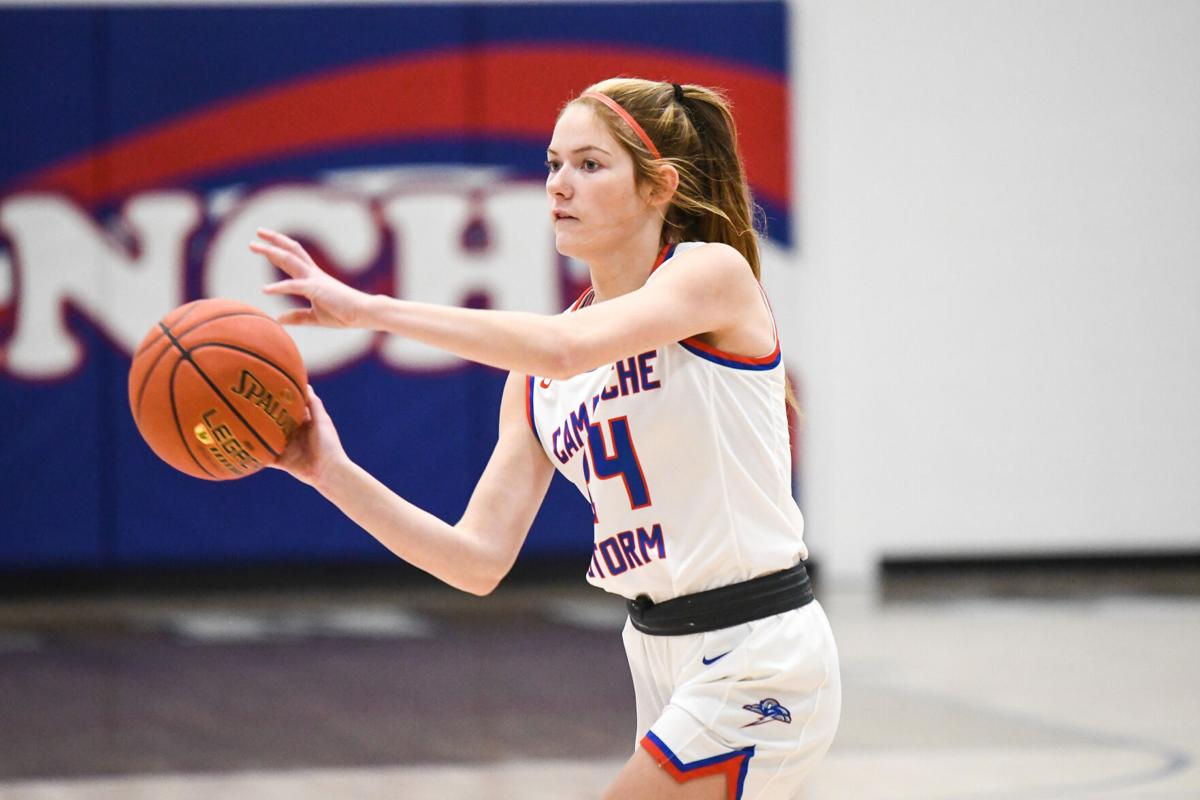 Emerson Crigger makes a pass on Tuesday, Jan. 11 against Monticello

Camanche’s Tucker Dickherber shoots over Monticello defense during the Panthers’ win over the Storm on Tuesday, Jan. 11

Camanche’s Adam Dunlap passes the ball during the Storm’s loss to Monticello on Tuesday, Jan. 11.

The Camanche student section reacts during the RVC game with Monticello on Jan. 11.

Camanche’s Miley Duritza shoots a three in the corner during the Storm’s loss to Monticello on Tuesday, Jan. 11.

Emerson Crigger makes a pass on Tuesday, Jan. 11 against Monticello

CAMANCHE – A clash of two state ranked and undefeated Class 2A teams was just what you would expect: a battle.

That battle ended with No. 4 Monticello topping No. 6 Camanche 67-64 in the River Valley Conference matchup on Tuesday night.

“It’s just January,” Camanche head coach Josh Davis said. Both teams came to the court with no losses so far. “We knew it was going to be a big game. I think for us, it’s just finding who is going to give us that big bucket at the right time and finding it. We have plenty of guys who are capable of doing it, we just have to get the ball to go in at those certain times.”

Down 60-58 with 55.7 to go, Monticello tried to get the ball in from the sideline but Tucker Dickherber came up with a huge steal. That play kicked off a string of possession changes and a riled up crowd. A Camanche three point attempt bounced out and the Panthers took the ball back. The Storm fouled to stop the clock and Monticello put in two to take the 62-58 lead.

The Storm didn’t put in a basket, but the foul turned into a rebound this time for the Storm and Tucker Dickherber took it coast-to-coast to cut the lead. Dickherber ended with 19 points to lead the Storm in scoring. Zane Witt added another 18.

Another foul, another two points for Monticello. Once again, Dickherber put in a layup to cut the lead to two and the Panthers had the ball back with 5.9 seconds.

Camanche fouled on the inbounds pass once again, and Monticello took a four-point lead once again. Dickherber put the ball in, but there was just 2.4 seconds remaining on the clock. Josh Davis called a sixth timeout to take the technical foul, sending Monticello to the line once more. They put in one of the free throws and took the 67-64 lead.

On the pass in, Mike Delzell came up with the steal but was fouled hard. He was sent to the line, but time expired before the Storm put up more points.

“They battled, they battled,” Davis said. “We knew we had to take that technical and it gave us a chance. Our guys kept extending, I’m really proud of our guys.”

The comeback effort came after Monticello dominated a lot of the game. The Storm were keeping Demarion Honaker to less minutes as he recovers from a knee injury. Being short handed paired with lights out shooting by the Panthers put the Storm at an early disadvantage.

“We were short handed and making it work,” Davis said. “We just needed to battle first half. Besides those threes, we gave up six points off offensive rebounds that we typically don’t give up. That ends up being big later on.”

Every time that the Storm made some headway, the Panthers had an outside shot to pull away again. They managed five three-pointers in the first quarter alone, draining seven in the first half including a buzzer three. That gave them the 35-28 lead heading into the locker rooms.

“We played pretty good [defense], they just got hot,” Davis said. “They shoot like that, it’s going to be hard for anyone to beat them. I’m proud of our guys for battling back after that.”

Back in the half, the threes continued. This time, three-pointers by Garrett Schultz and Tucker Dickherber kept the Storm in it. The Panthers garnered as much as a 13-point lead in the third quarter.

Camanche found a spark in freshman Tyson Seeser. Seeser came in and hit his own three, then he got a steal near half court that turned into a layup. That cut the lead to 50-48 at the end of the third.

“We know he’s athletic,” Davis said. “We’ve been kind of waiting for the right spot to find for him. We were looking for someone to make a play in the full court and his length and athleticism made him the right guy to do that. He definitely gave us a spark and got us back in the game.”

A pair of free throws by Adam Dunlap started the fourth and tied the game 50-50, setting the stage for the wild last eight minutes of play.

The Storm (10-1) will head to Loras College on Saturday to take on Wilton. They’ll see Monticello again in the regular season on Tuesday, Feb. 8 on the road.

The Camanche girls held a powerful Monticello team back, but couldn’t quite find the points Tuesday night, falling 34-22.

“Monticello is a good team,” Camanche head coach Andrew Carbajal said. “I’m pretty proud of our team. If we hold every team to 34 points, that’s awesome. We could do a better job of looking to shoot – we’re still hesitant and have the same mentality as years past where we don’t want to shoot because we’re afraid of failure. Tonight, there was something different in the second half and we fought back.”

The Panthers came in with a six-game winning streak, including a win over state-ranked Cascade, extending that streak to seven games Tuesday night.

The two played a defensive-minded contest Tuesday, with no one scoring at all until three minutes into the game. The Panthers put in two consecutive three-pointers to kick off scoring.

The Storm didn’t find the basket until 1:15 was left in the first quarter, when Emersen Crigger was fouled and put in two free throws. By that time, the Storm were trailing 10-2.

The offense stayed patient and had some good looks, but the Storm didn’t put in a basket from the field until the second quarter. After playing 13 straight minutes, Crigger hit a three for the Storm, trailing 17-6. Most of the offense for Camanche came from the perimeter.

“We don’t have a big presence inside,” Carbajal said. “We’re all technically point guards and it’s hard finding posts for down there. For just learning that game and battling with big girls down there, I thought we did good. I thought we went to a high-low game tonight, Monticello just played great defense.”

By the time the third quarter ended, the Storm trailed 31-14. Then, they held the Panthers back as they attempted a comeback effort. For the first six and a half minutes of the fourth quarter, Camanche kept Monticello from scoring.

They only managed to cut the lead to 31-20 before the Panthers pushed points across the board. Still, it was an accomplishment according to Carbajal.

“We have to be able to start pressing a little bit more,” Carbajal said. “Steal the ball and go. Tonight we didn’t look at the press as much, Monti was very fundamentally sound.”

The Storm (4-7) will take on Wilton on Friday night on the road.

HARBOUR BEACH [mdash]On Sunday, January 9, 2022, Daniel Gerlach, husband and father of two, passed away at the age of 65 from cancer. Dan was born on July 28, 1956 in Preston, Iowa to Gene and Eleanor Gerlach. On December 19, 1989, he married Marie Hill. Dan was preceded in death by his fath…

Rebecca Sue Wilkens, 44, of Thomson, Illinois, died Wednesday, January 19, 2022 at Mercy One, Clinton. Online condolences may be expressed by visiting snellzornig.com. The Clinton Chapel Snell-Zornig is assisting the family with arrangements.