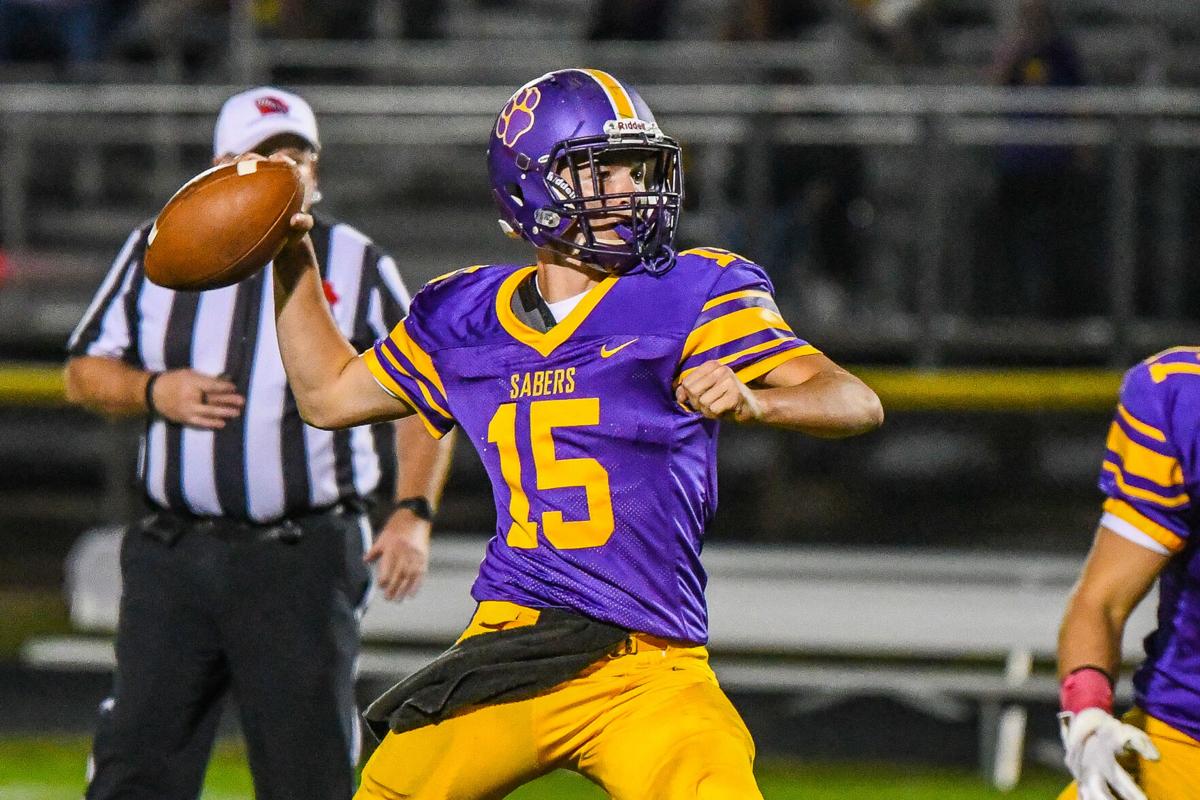 Central DeWitt’s Paul Kuehn looks for a pass during the Sabers’ 14-7 win over Camanche on Friday night, putting DeWitt at 2-0 on the season. 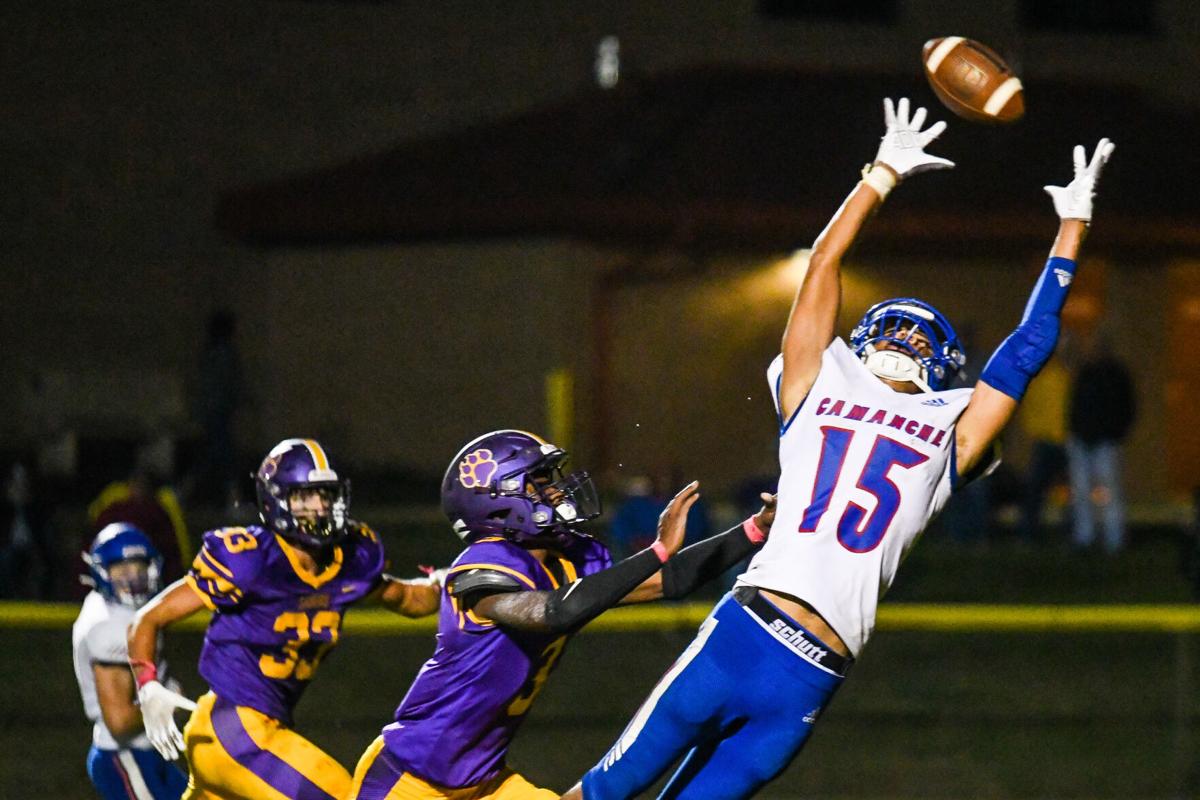 Camanche’s Adam Dunlap reaches for a pass in the endzone while chased by Central DeWitt defense. The Sabers edged the Storm on Friday 14-7. 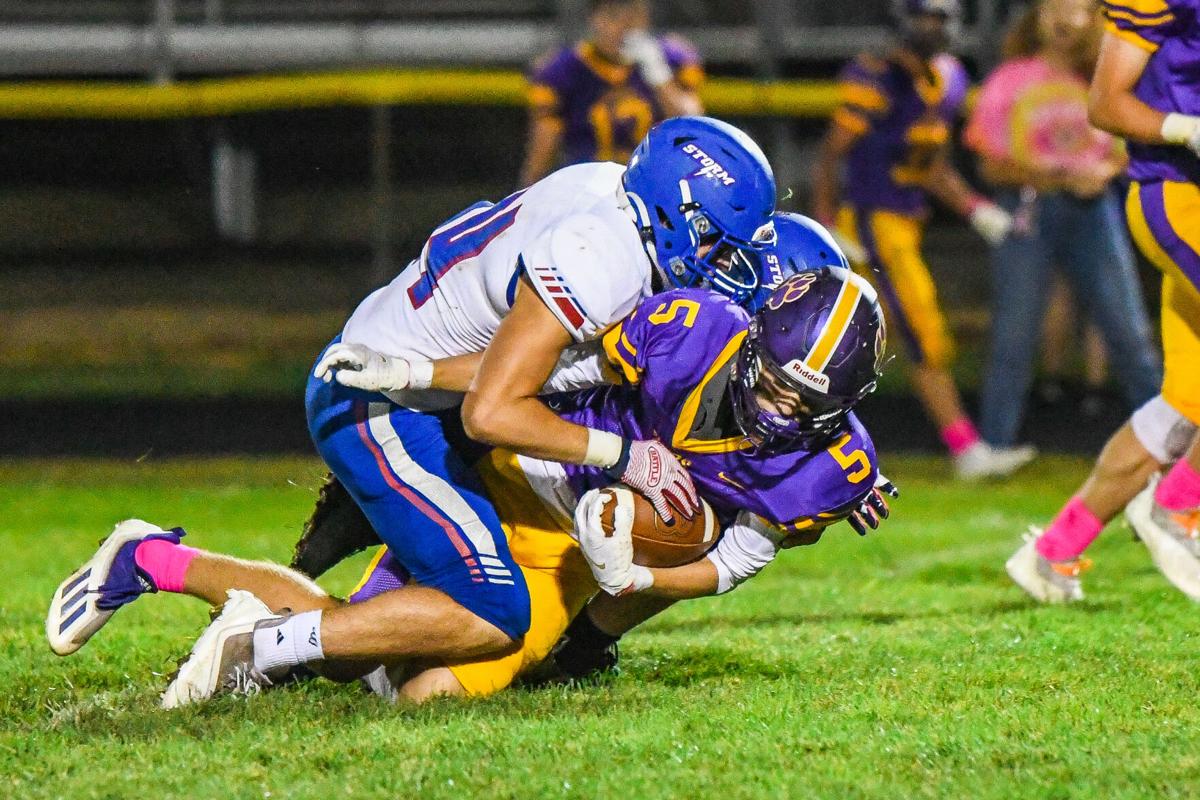 Central DeWitt’s Paul Kuehn looks for a pass during the Sabers’ 14-7 win over Camanche on Friday night, putting DeWitt at 2-0 on the season.

Camanche’s Adam Dunlap reaches for a pass in the endzone while chased by Central DeWitt defense. The Sabers edged the Storm on Friday 14-7.

DEWITT – A slow offensive start for two local teams ended in a one touchdown game that saw Central DeWitt on top of Camanche 14-7 in Week 2 of high school football.

For Camanche, a lot of it came down to mistakes. The Storm had 12 penalties throughout the night, including a crucial illegal procedure late in the fourth that sent a big passing touchdown back to third down.

“We just really have to get better,” Camanche senior quarterback Mike Delzell said. “When we make a big play and it gets called back, it leaves points on the field.

“I liked our toughness tonight. They have some big boys, and our linebackers and d-line really proved that we can be tough. Going forward, I have confidence, we just have to be more fundamental. Less penalties and the big plays will come.”

DeWitt was in their second tight game of the year, winning by just eight points after being tied late in the game last week against Davenport Central.

The Sabers struck first, though, a passing play from Paul Kuehn to Gibson McEwen down field two minutes into the game.

“My goal play-to-play is just to get the ball moving,” Kuehn said. “We didn’t get it done early but we kept in it. My defense carried me – only letting them score 7 points is amazing.”

The Storm answered with a drive down to the 12-yard line but couldn’t convert that into points. Instead, the game remained 6-0 until late in the half when an 8-yard touchdown run by Eric Kinkaid.

That gave a one-point lead to the Storm.

The game remained tied and fairly sloppy for the remainder of the half and the entire third quarter. The difference-making play came on a 10-yard pass from Paul Kuehn into the hands of Lucas Burmeister in the corner of the endzone. Kuehn ran the ball in on a quarterback keep for a successful two-point conversion and the Sabers took the 14-7 lead and the Sabers would hold onto that lead.

“I saw the backup cornerback one on one with Lucas, one of our best athletes,” Kuehn said. “I threw it up, I knew he could make the play.”

A couple of big runs from Eric Kinkaid put the Storm back in Saber territory, but that wasn’t new. Camanche had spent the majority of the time in Central DeWitt’s half of the field throughout the game but couldn’t get close enough to score.

Camanche did lose senior Zach Erwin to a knee injury early on in the game.

A big pass to Adam Dunlap and then a big pass to Tucker Dickherber made it look like the Storm were going to tie the game again, but the touchdown was brought back because of an illegal shift.

“We have to be better,” Delzell said. “We can’t leave it in the ref’s hands. We have to be more fundamental – and I really thought that was going to be one of our strengths this year was being a solid fundamental team. Tonight, we didn’t show that.”

The Indians had more opportunities. Even after that, Garrett Schultz picked off DeWitt’s Kuehn and Camanche got the ball back on the 25. The Central DeWitt defensive line kept the Storm at bay, breaking up multiple would-be touchdown passes on the drive.

Not long after, a Camanche fumble gave Sabers possession again.

“On defense, we were just all together,” DeWitt’s Mitchell Howard said. “We all rallied together when we needed it. We had some hiccups along the way, but we were flying around and having fun out there.”

The Storm (0-2) will stay on the road next Friday, traveling to Maquoketa.