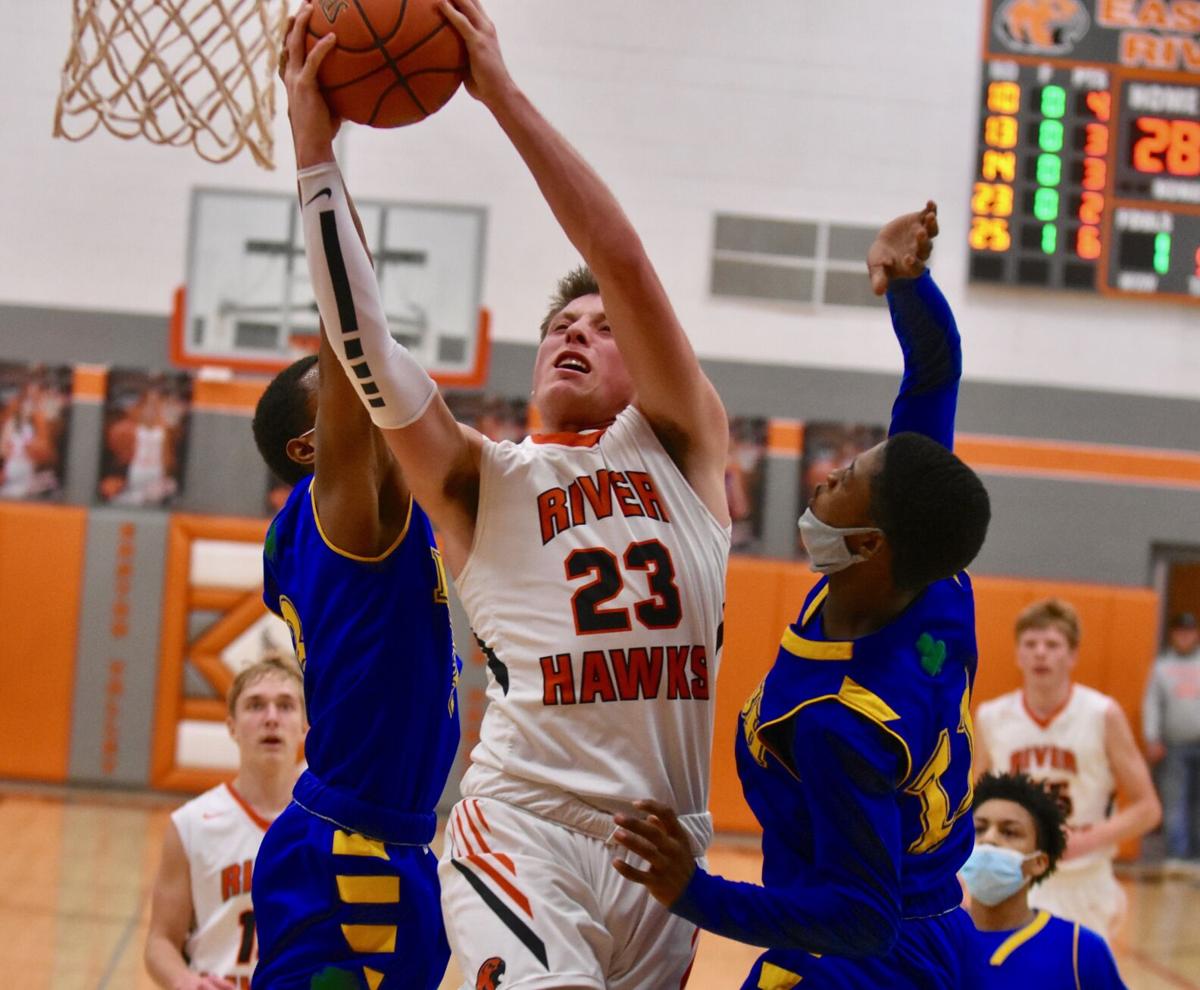 Easton Valley’s Kaleb Cornilsen (center) makes a layup through heavy defense during the River Hawks’ win over Prince of Peace Feb. 18 at Miles. 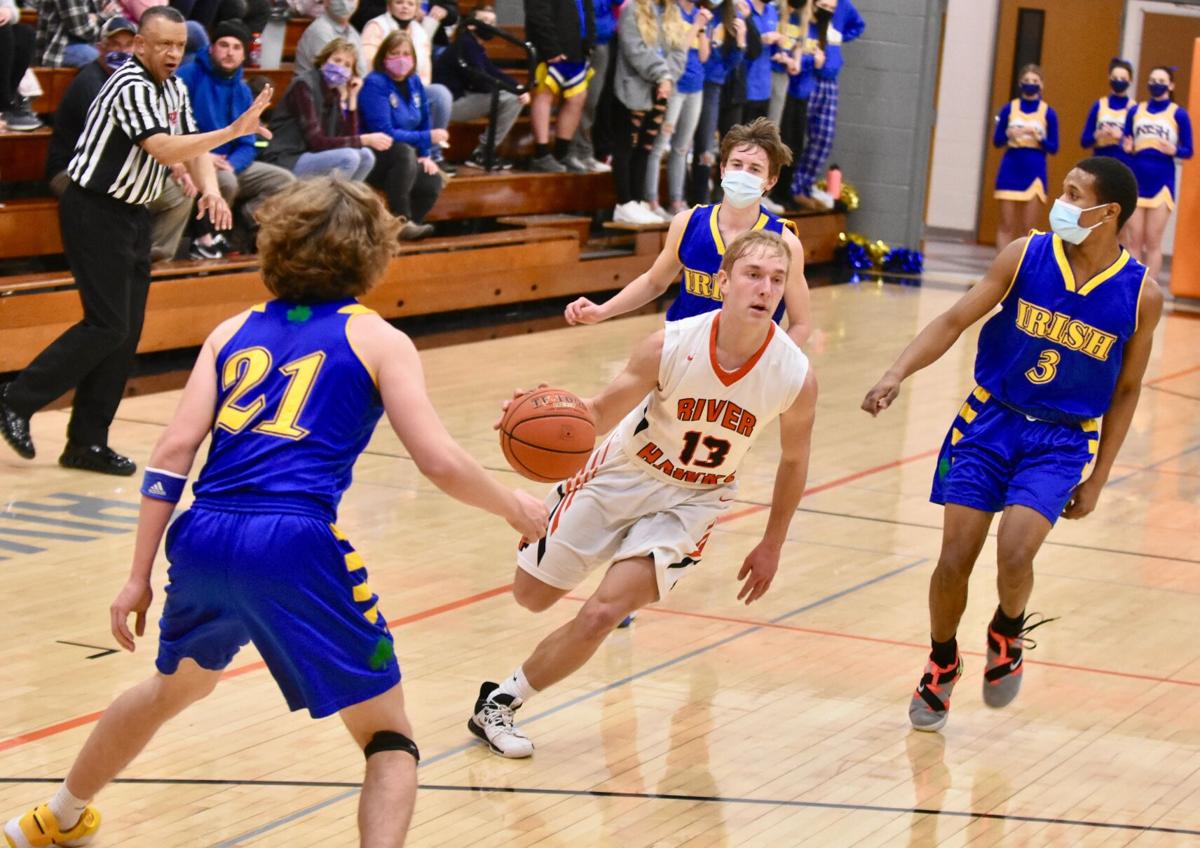 Easton Valley’s Kaleb Cornilsen (center) makes a layup through heavy defense during the River Hawks’ win over Prince of Peace Feb. 18 at Miles.

They played their best game of the season.

“We saw the best game that we’ve seen from them all year,” Beck said. “I didn’t have a lot of contact with most of them (Thursday), I didn’t have most of them in P.E. like I usually do, so I asked one of the other students if they thought the boys were ready and she said, ‘Yeah, I’m pretty sure they’re ready.’ She was right.”

The River Hawks defeated Prince of Peace 75-35 in a Class 1A Substate 4 Second Round game, improving to 20-0.

“Our main thing was turning defense into offense,” EV’s Porter Fuegen said. “We were doing that the whole night. We knew it was going to start on the defensive end. We came out fired up and that got us into a lot of fast breaks and we were passing the ball well.”

It was the River Hawks’ third victory over the Irish this season.

“I thought we had a really good second half, but tonight was not our night,” Prince of Peace coach Gerry Murphy said. “Tough to play in this environment. They’re tough when they’re on. We just turned the ball over way too many times. They had a lot of run outs. We gave them a pretty good game at our place, but we played a little bit slow, possession basketball. This time, we got in a running game with them — that was a big mistake.”

“Our goal was, ‘Don’t let him get the lane,’” Fuegen said. “He’s super shifty and good at getting into the lane — when he’s in the lane, he’s a very consistent scorer, so we were trying to force him outside the whole game, make him shoot from outside and we did a pretty good of that.”

Mingo said the Irish weren’t as prepared as the River Hawks.

“They were more prepared than us,” Mingo said. “We were coming in pretty confident, but a little too much. We needed to be more humble. They showed us how it’s done. We needed to come out with more fire and it came late in the game, but it was already too late for that.”

EV’s Kaleb Cornilsen led all players with 24 points, but it was his passing that impressed Beck the most.

“We thought it was Kaleb’s best passing night ever,” Beck said. “Sometimes we get the ball to him and he feels like he has to do the scoring. He ended up with 24 and we were just talking about how he’s getting double-teamed and triple-teamed so much and he still finds a way to score. The whole game tonight, he was just fantastic. Definitely playing like a first-team all-stater.”

Cornilsen said his teammates made it easy.

“We played as a team that game,” Cornilsen said. “Our cutting was awesome and that’s where most of our points came from. I’d get the ball in the block and we’d have guys from the weak side wings cut and it was open every time. We brought great team work and intensity.”

Fuegen added 14 points for EV. Mingo finished first on the Irish with 11 points.

Prince of Peace finishes the year 13-8. Murphy credited the senior class with stepping up this year.

“The senior class has really come a long way,” Murphy said. “Some of them were part of the state tournament team a few years ago. I thought Kyler (Wallace) really picked it up when DaSean was gone. I just think as a group they all stepped up.”

Mingo said it was a pleasure to play for the Irish after transferring to Prince of Peace at the beginning of the year.

“Since I came here, I’ve gotten way better than I was last year, I improved a lot,” Mingo said. “This is a great program they have here. I told (the other seniors) it was a pleasure to play with them. I came here and they gave me everything I wanted.”

The River Hawks go on to play Wapello (16-3), which defeated Calamus-Wheatland 71-38 in its second round game, at 7 p.m. Tuesday at Clinton High School.

“We’ve got a lot of confidence building,” Fuegen said. “We got a little bit down at the end of the season, but we’re getting it right back coming into the playoffs with two big wins so far.”