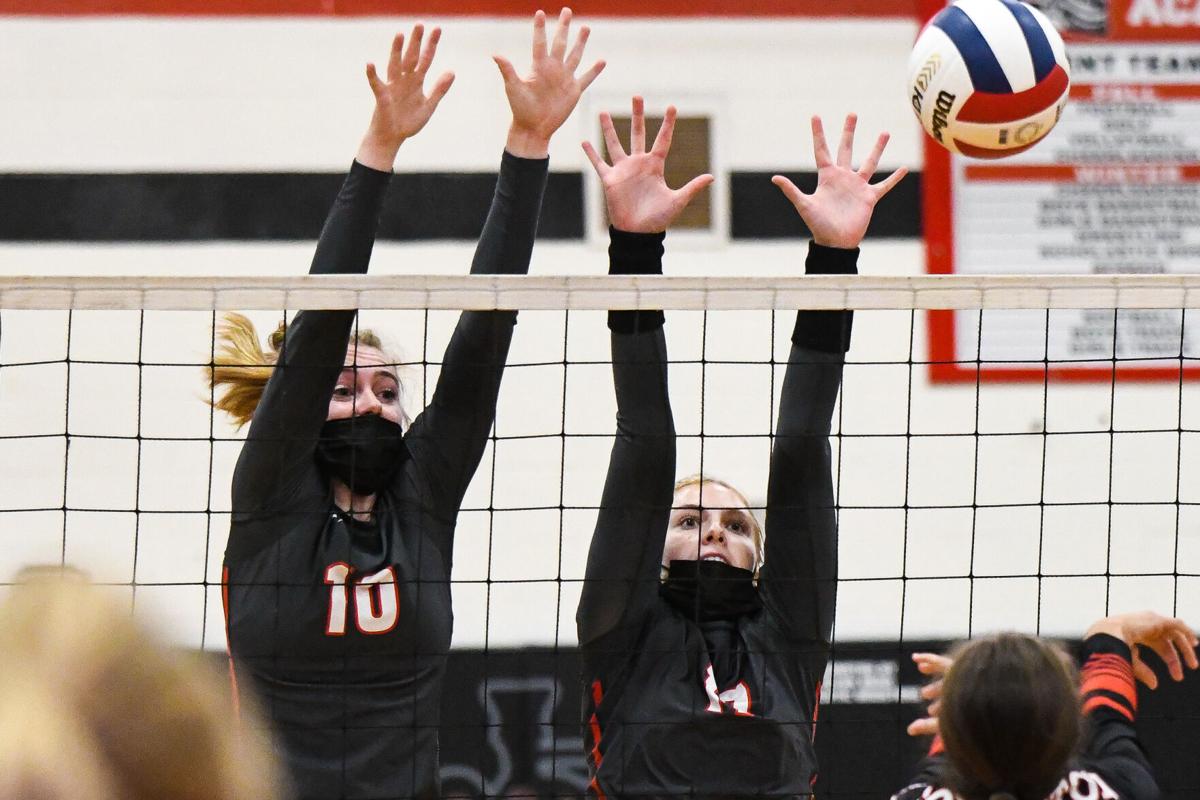 Reese Dykstra and Ava Bowen got up for a block against a Forreston attack on Thursday night during Fulton’s home conference volleyball game. The Cardinals downed the Steamers 25-15, 25-22. 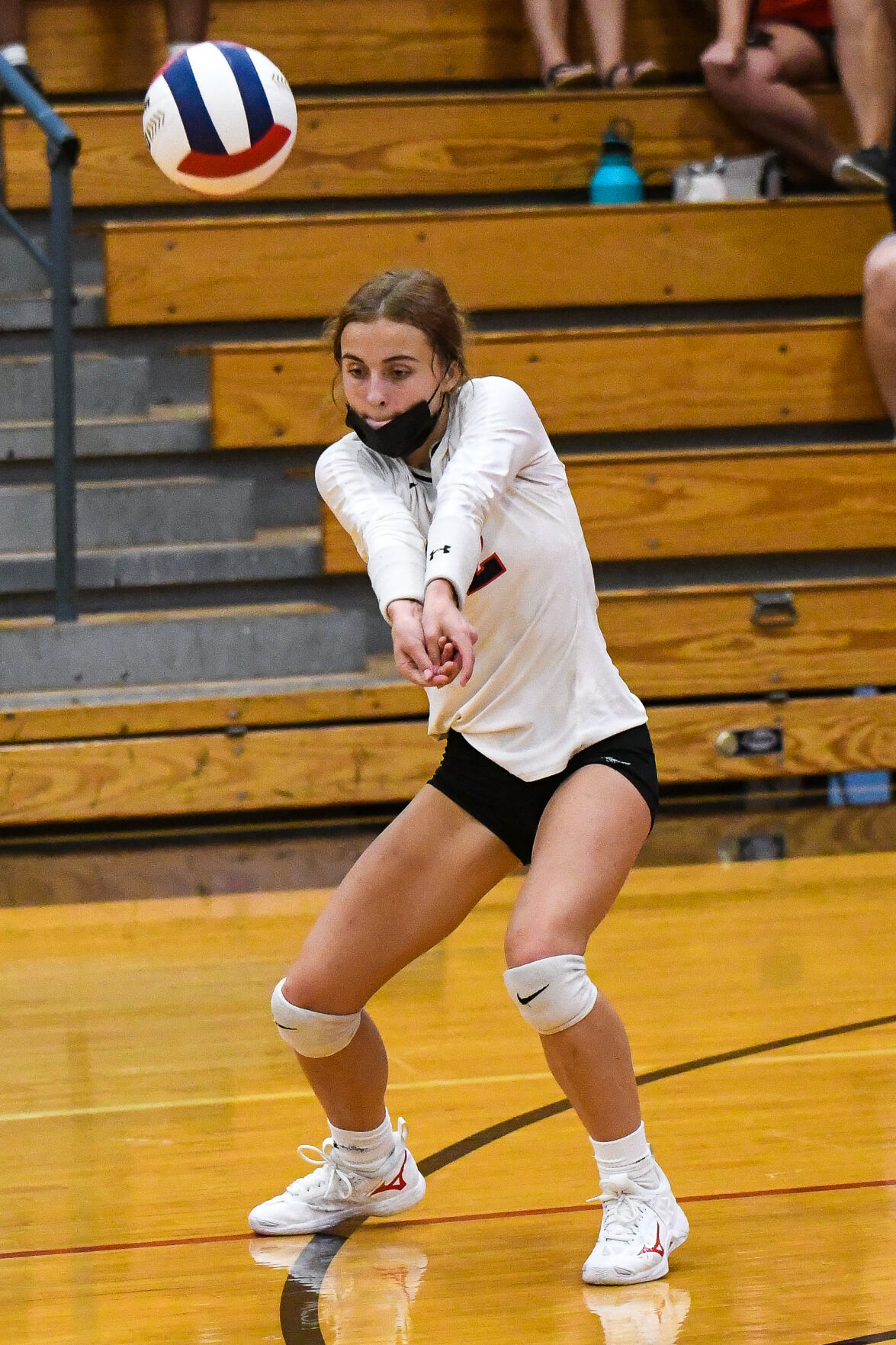 Teegan Germann passes up a ball on Thursday night during Fulton’s home conference volleyball game against Forreston. The Cardinals downed the Steamers 25-15, 25-22. 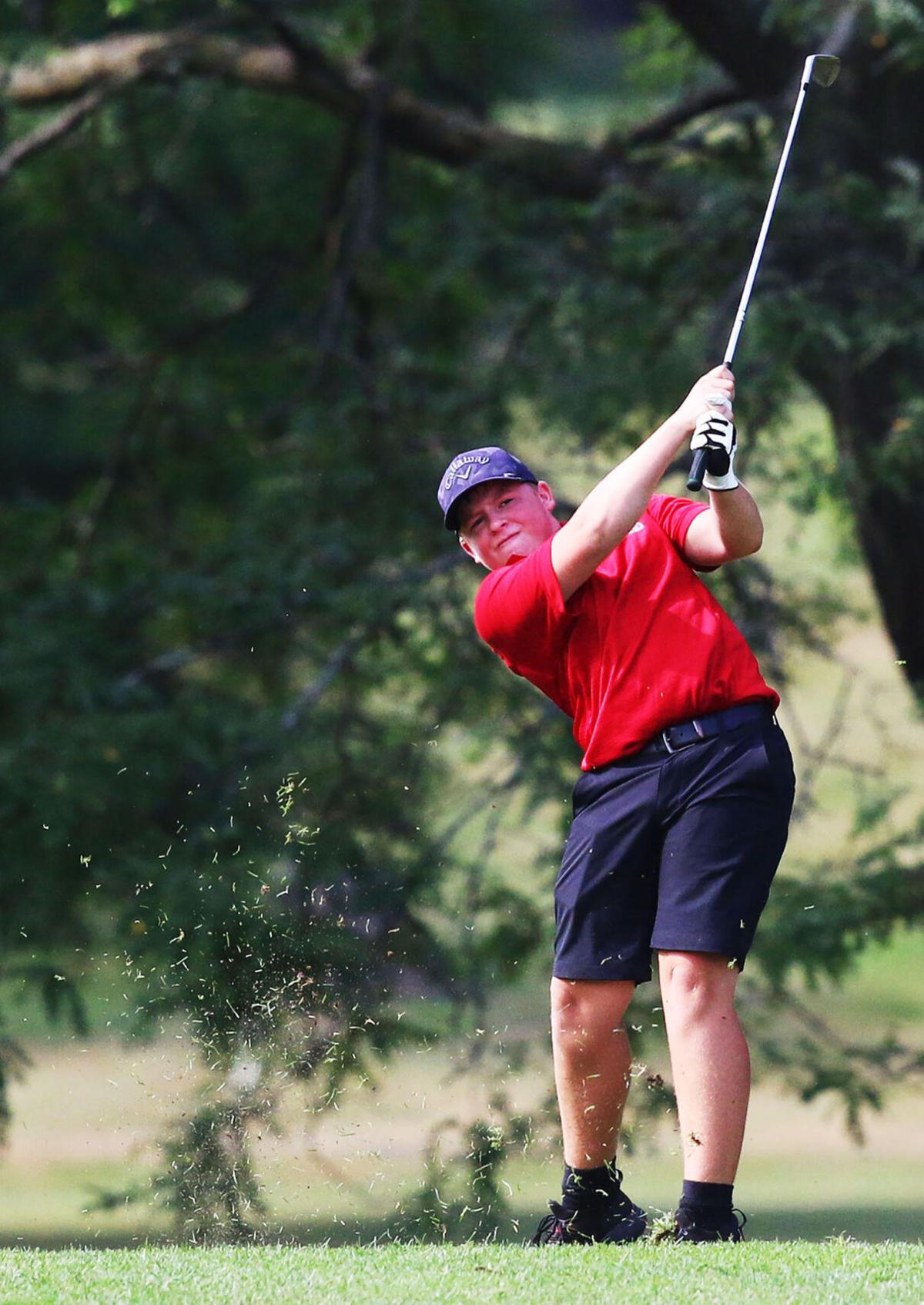 In this file photo, Clinton High School’s Jaiden Busse hits from the fairway, during a quadrangular meet with North Scott, Davenport Central and Central DeWitt, Thursday, August 26, 2021, at the Spring Brook Country Club. The meet was won by North Scott with a team total 171.

Reese Dykstra and Ava Bowen got up for a block against a Forreston attack on Thursday night during Fulton’s home conference volleyball game. The Cardinals downed the Steamers 25-15, 25-22.

Teegan Germann passes up a ball on Thursday night during Fulton’s home conference volleyball game against Forreston. The Cardinals downed the Steamers 25-15, 25-22.

In this file photo, Clinton High School’s Jaiden Busse hits from the fairway, during a quadrangular meet with North Scott, Davenport Central and Central DeWitt, Thursday, August 26, 2021, at the Spring Brook Country Club. The meet was won by North Scott with a team total 171.

FULTON, Ill. – The first set on Thursday night ended with yet another serve long an out of bounds – just fitting for an error filled game for the Fulton volleyball team.

Seven serving errors and 14 hitting errors plagued the Steamers and they fell 2-0 in conference play to Forrest 25-15, 25-22. It was the second loss this week for Fulton and the second one with high error stats.

“I know we’re a young team and I know we have to take baby steps,” head coach Stacy Germann said. “I’m going away with this is a baby step tonight. This was better. It’s a loss and we don’t want to accept that, but it was better than Tuesday.”

The Steamers started the first set strong. A few blocks and a couple powerful swings sent them soaring to an early lead. Once a few mistakes happened, they just seemed to keep going.

“I think the newness is still a little overwhelming for them,” Germann said. She plays four sophomores in her lineup. “We can’t get our timing right.”

Outside hitter Brooklyn Brennan slammed down a big kill down the line to break a Cardinal scoring streak, but the Steamers were behind 13-0.

By the end of the first set, Fulton had been outscored by Forreston 18-6.

Early on in the second set the Steamers found a little momentum sparking off the hands of the front row. A huge block by sophomore Ava Bowen and Reese Dykstra put some life back into the red and black.

They ended up with eight team blocks on the night.

Mid-set, Kara Stoecker crushed an overpass by the Cardinals into the middle of the court to tie the set at 17-17. Stoecker led the team in kills with four throughout the competition.

The second set went back and forth from there, but ultimately the Cardinals put together a couple of swings that fell to end it all.

Although the mistakes haunt the Steamers, Germann sees this performance as an improvement. Fulton just switched to the Northwest Upstate Illini Conference and started their year off with two of the fiercest competitors in Eastland and Forreston. This game, there was more to take from.

“We looked a lot better than we did Tuesday night,” Germann said. The Steamers also lost 2-0, but by much wider margins. “Our defense looked better, we had better things going on.”

The Steamers also ended up with 37 digs on the night, 16 coming from libero Teegan Germann.

“We spent 45 minutes on defense yesterday,” Germann said. “Tonight we had a lot more forward movement. We were able to pick up a lot more balls. That’s a step ahead.”

The Steamers play in a tournament this Saturday at Byron and then travel to AFC next Tuesday to jump back into conference play.

BELLEVUE – The Camanche volleyball team fell in a three-set battle to River Valley Conference opponent Bellevue on Thursday night on the road.

“Obviously we always want to win but I was proud of the girls for fighting to the end,” head coach Heather Clark said. “Our goal going into the game tonight was to play hard and have fun.”

“Senior Abigail Beal did a great job coming off the bench and being a leader on the court and changing the ton of the game,” Clark said. “There were multiple times we were down by multiple points and her presence and attitude on the court helped us get back into the game.”

Aubrey Carstensen and Jamie Robertson each added four kills to that mix.

Robertson and Carstensen also led the defense with six digs a piece.

Clinton finished seven out of the eight teams, and Central DeWitt took fourth as a team.

Central DeWitt finished with 336, just 13 strokes out of third place behind Pleasant Valley. Burlington won the meet with a 302 and a new meet record and North Scott was the team runner-up.

Leading the Sabers was Carter Drury. Drury shot an 81 on the day. Jacob Brokaw came in just one stroke behind with an 82 and Chris Martens shot an 85.

Clinton’s best performance on the day came from Kaleb Luckritz. Luckritz finished with a 100. Brody Manemann shot 103 and Sabir Akiti 105.