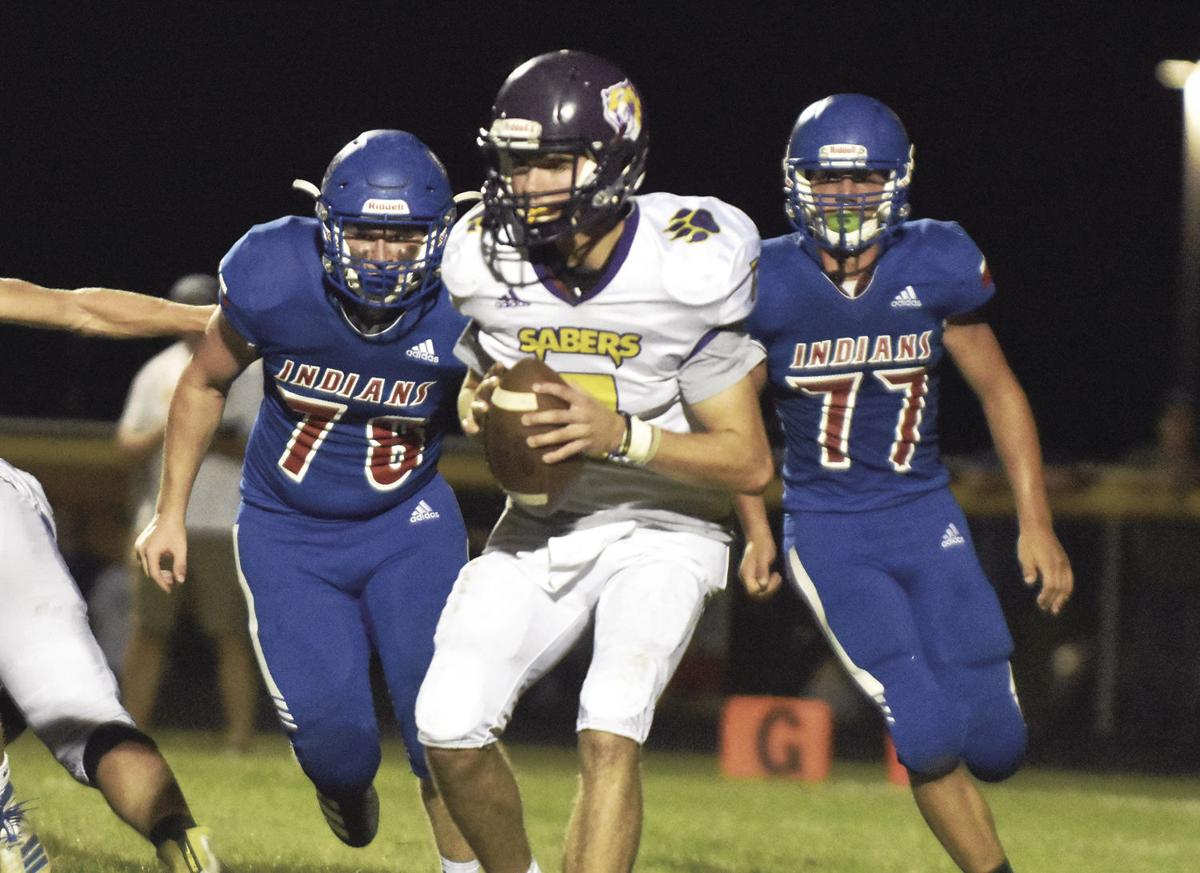 Central DeWitt quarterback Henry Bloom holds theball and looks for his options while chased by Camanche’s Payton Nicol and Logan Waltz during the first half of the Indians’ 40-27 victory over the Sabers on Friday. 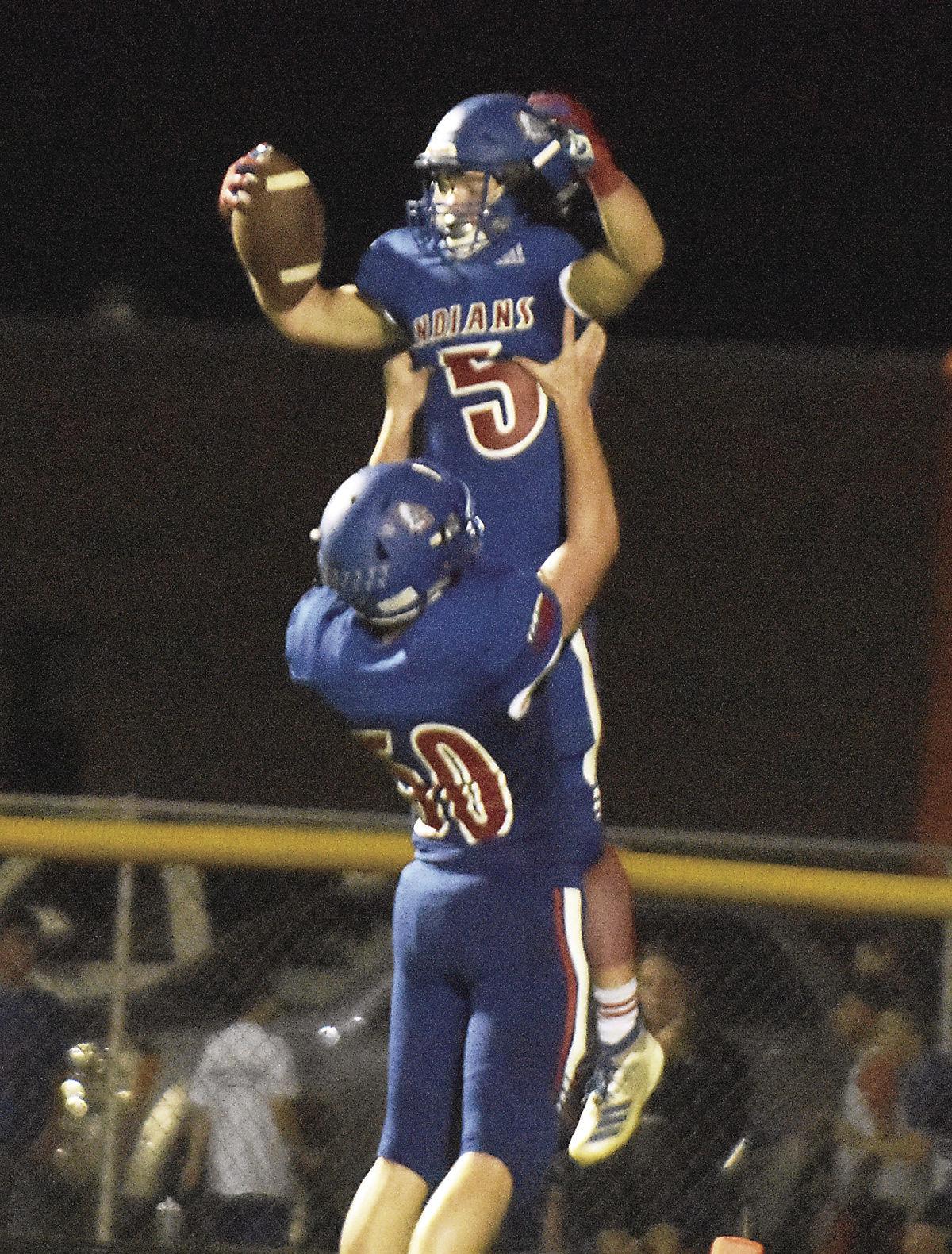 Carie Kuehn/Clinton herald Camanche’s Michael Delzell (50) lifts up Cade Everson (5) after one of his touchdowns on Friday night. 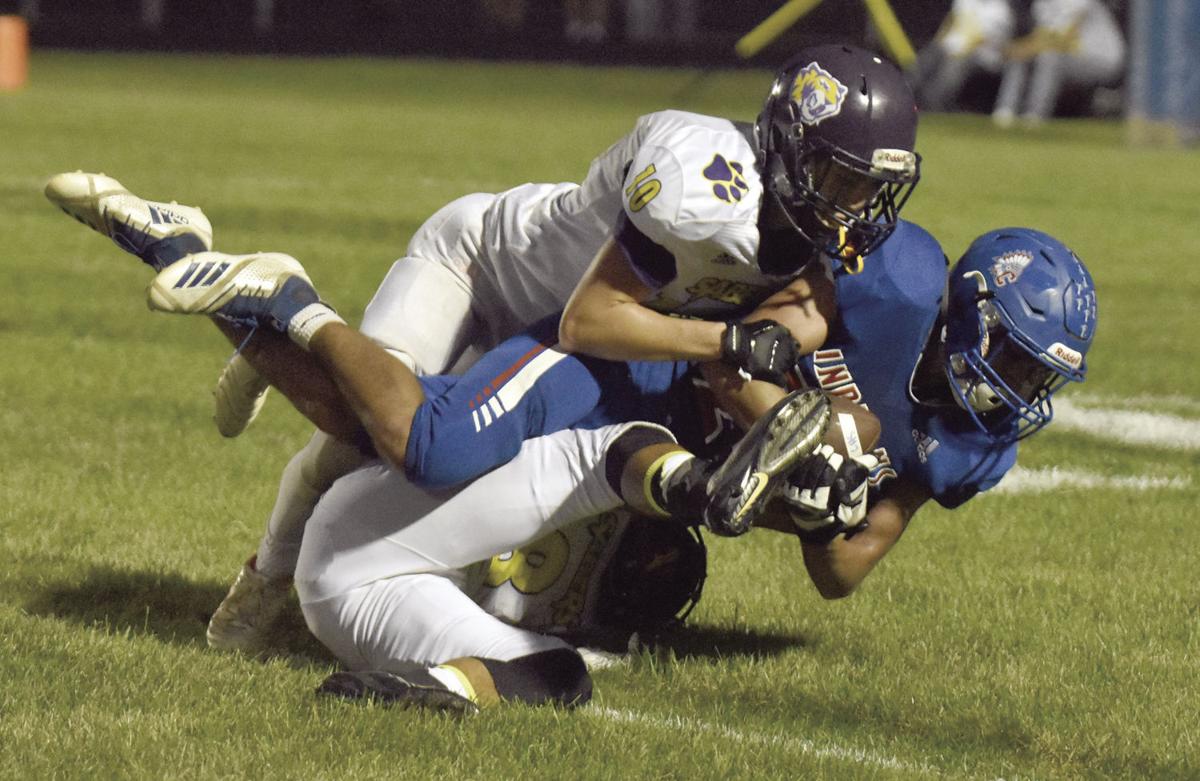 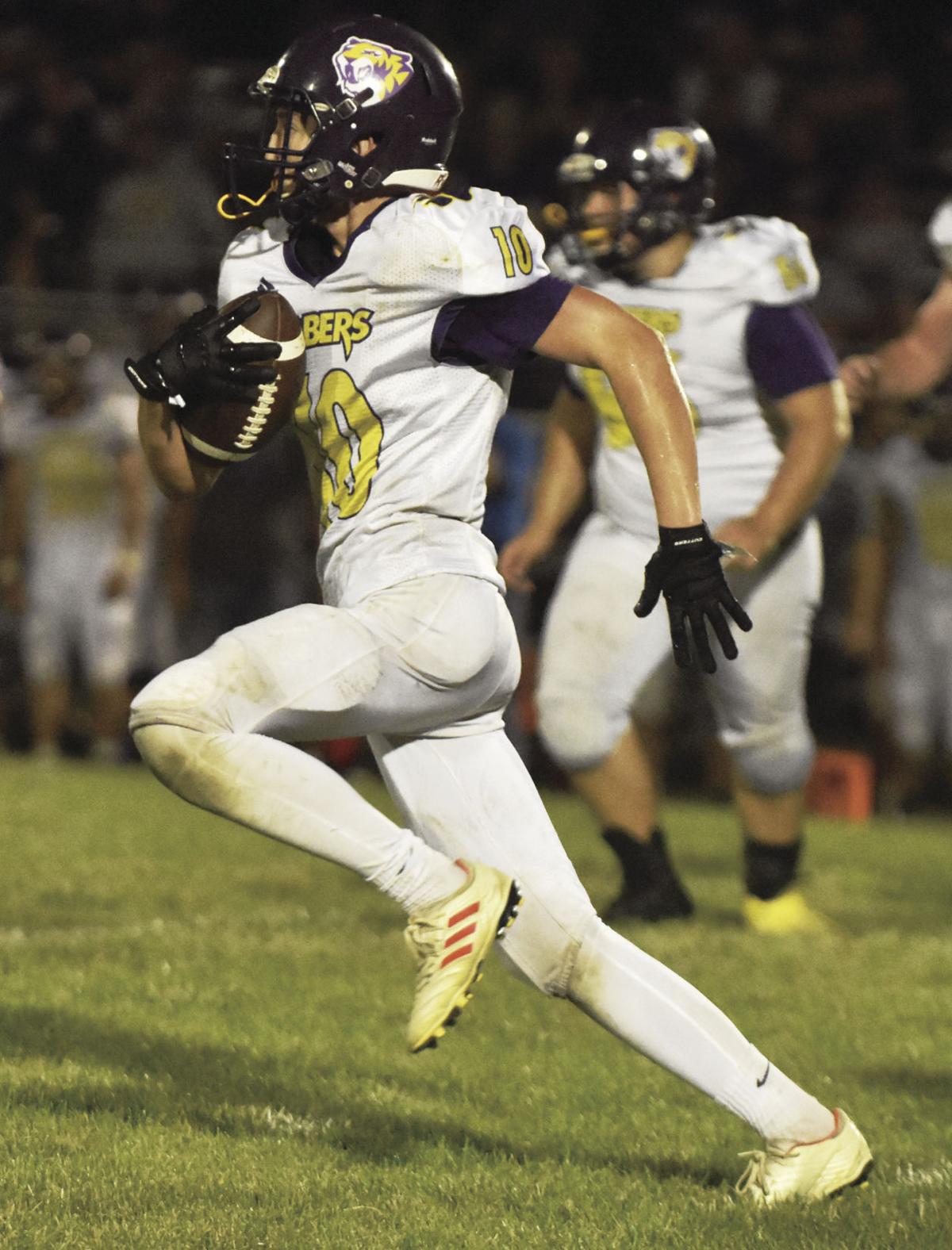 Central DeWitt quarterback Henry Bloom holds theball and looks for his options while chased by Camanche’s Payton Nicol and Logan Waltz during the first half of the Indians’ 40-27 victory over the Sabers on Friday.

Carie Kuehn/Clinton herald Camanche’s Michael Delzell (50) lifts up Cade Everson (5) after one of his touchdowns on Friday night.

CAMANCHE – There was nothing boring about the local non-district matchup between Camanche and Central DeWitt Friday night.

The night ended with a 40-37 overtime win for the Indians, who were lifted up by four touchdowns from Cade Everson.

Helped by some cold-blooded defense, the Indians held the Sabers to just a field goal from Landon Peterson on their first and only drive of OT.

The next series took two played from Everson. He took a pitch for the 6-yard touchdown, boosting Camanche to the 40-37 win.

It brings the Indians to 3-1 on the season and drops the Central DeWitt Sabers to 2-2.

The game started with a defensive battle, broken first by the Sabers. After the Indians fumbled on a punt attempt with four minutes remaining in the first quarter, the Sabers powered through the middle to take the 7-0 lead.

Henry Bloom, the rookie quarterback for the Sabers, was looking good with quick passes.

Then Camanche dominated. They scored 21 unanswered points to finish out the half.

Jordan Lawrence found Ethan Buckley for a pass play that moved the Indians into Saber territory first. Then a fourth and 18 pass from senior Caleb Delzell found the hands of Raul Esparza, putting them within 14 yards of the goal.

Everson took the ball and ran it in for his first of the night, evening things up.

Payton Nicol and Michael Delzell then worked together for a fumble and the recovery, sending the ball back to the Indians.

On their second drive of the second quarter, DeWitt’s Matt Roling picked off Delzell for the Indians’ second thrown interception of the night.

Delzell made up for it. With under two minutes to play, he found Kyle DeWeerdt for a 36-yard complete pass, setting things up for Everson with a short four-yard TD, giving Camanche their first lead of the ngiht.

Everson then intercepted Henry Bloom with under a minute to go in the half, running it in 37 yards, breaking 100 rushing before the first half closed out and giving the Indians a 21-7 lead heading to the locker rooms.

It was then Camanche’s turn to crawl back in the final quarter of play.

With 5:55 to go, Delzell found DeWeerdt, this time in the endzone, for a 37-yard score.

Nicol notched another fumble recover ust a few seconds later, setting things up for a series that ended with a 21-yard touchdown pass from Delzell to Buckley, tying everything up at 34-34. DeWitt managed to block the extra point attempt to keep things tied .

With four minutes remaining, neither team could get anything past the other’s defense, sending things to OT.

Camanche will play at NelsonCorp Field next Friday, a matchup with the Tipton Tigers (2-2) their first district contest of the year.

The Sabers will travel for their district opener, heading to North Scott (3-0).