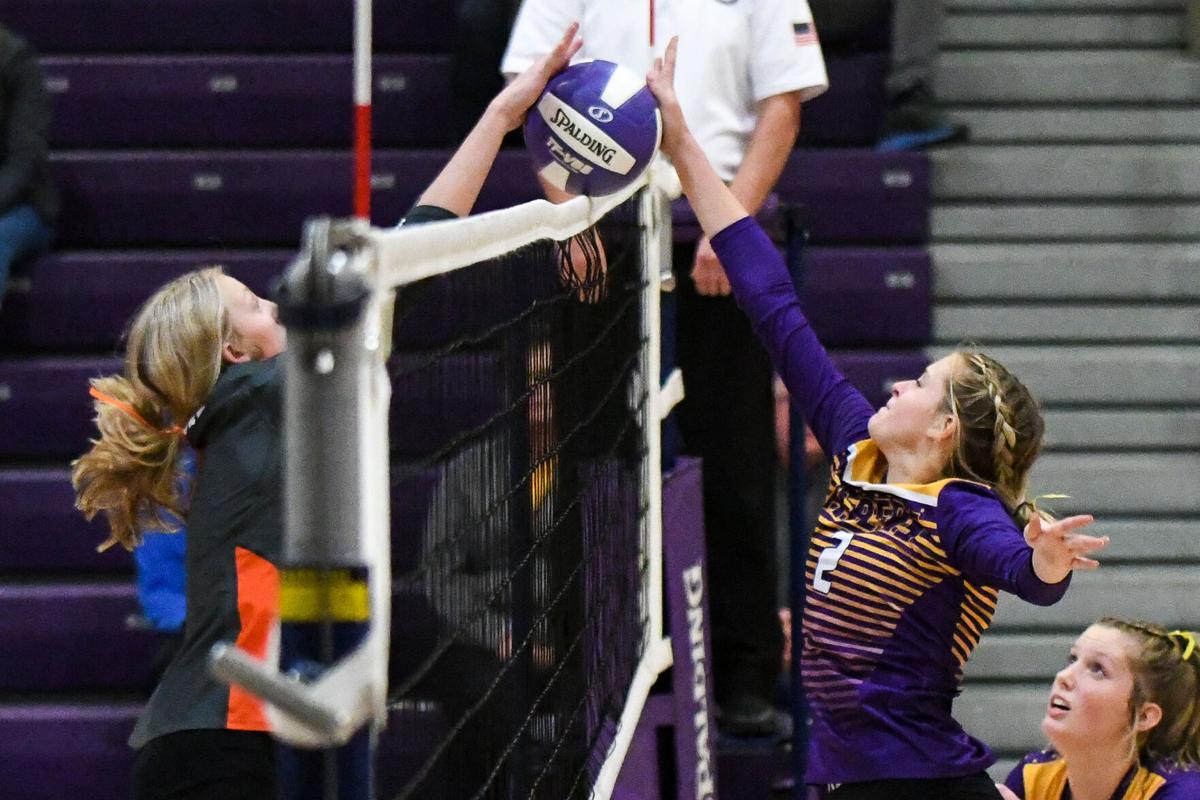 Central DeWitt’s Elaina Schroeder fights for control of a ball at the net during the Sabers’ regional semifinal win over Solon Thursday night in DeWitt. Schroeder led the Sabers with 14 kills on their was to a 3-1 victory. 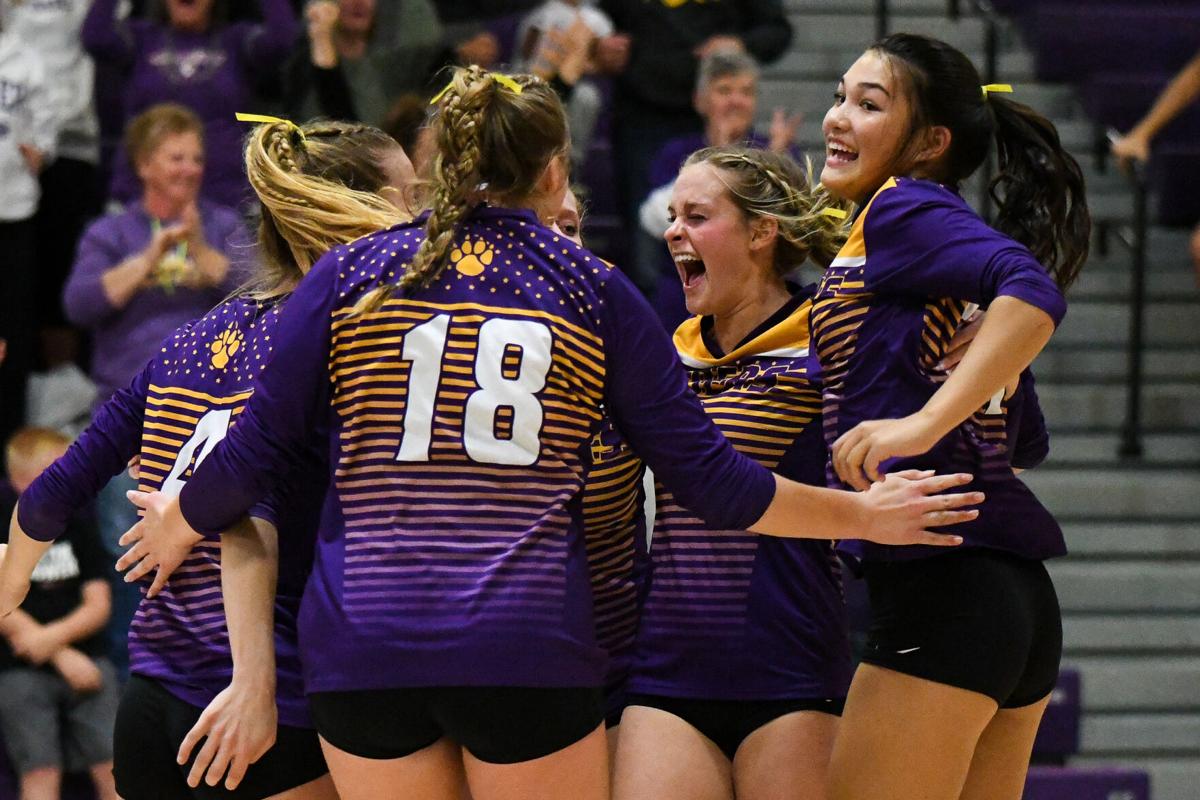 The Central DeWitt varsity team celebrates after clinching a trip to the Class 4A regional final next week with a 4-set win over Solon. 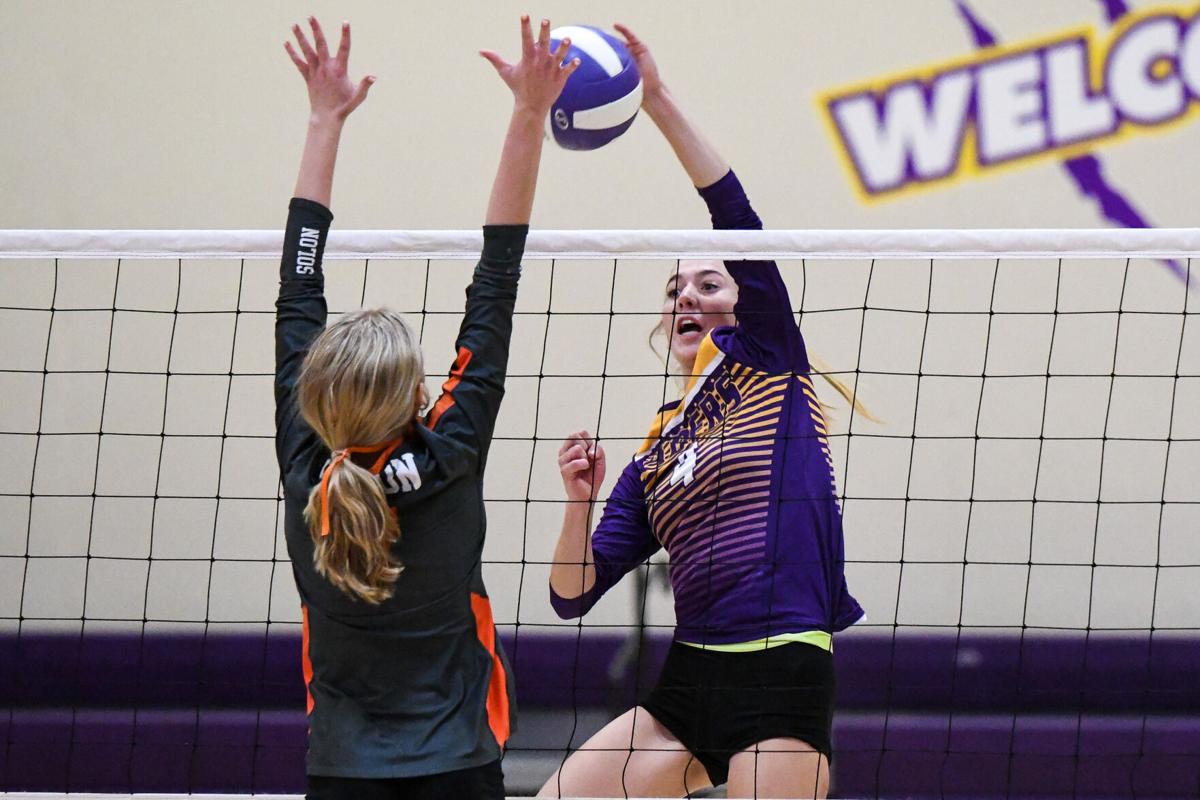 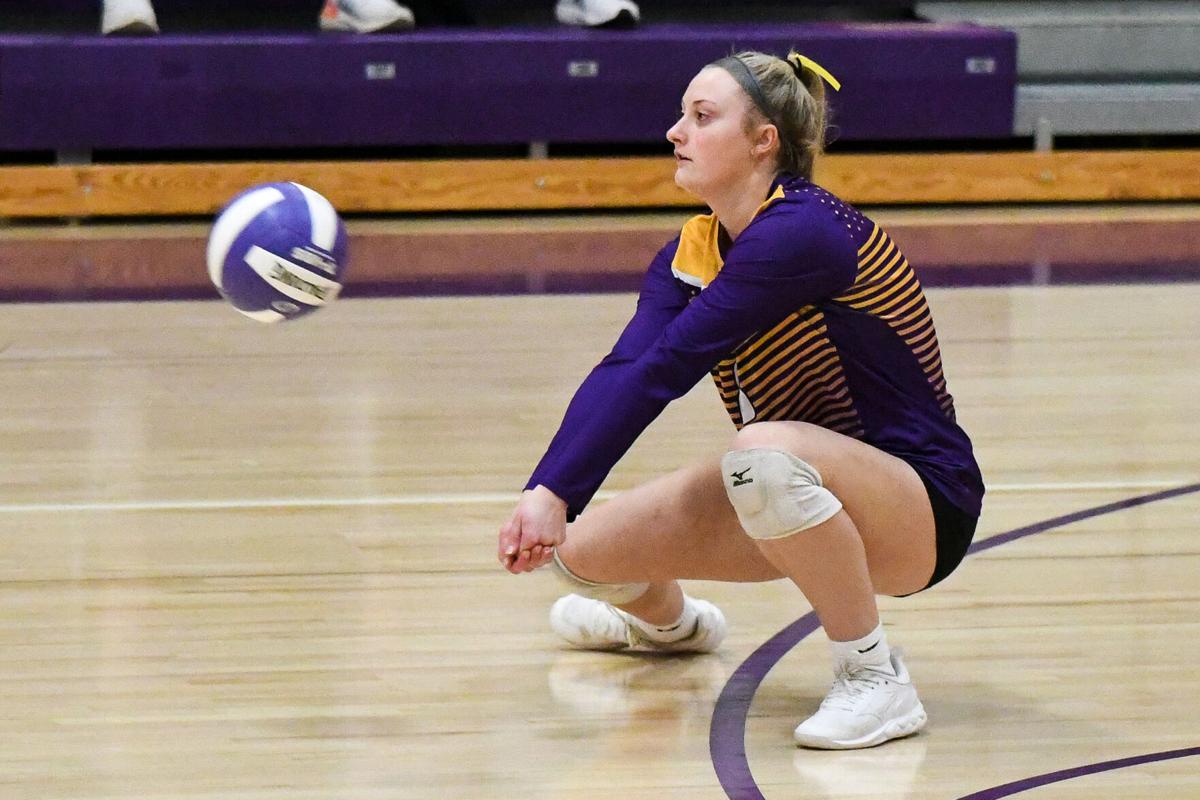 Central DeWitt’s Lexy Cooper digs up a ball during the Sabers’ win over Solon Thursday.

Central DeWitt’s Elaina Schroeder fights for control of a ball at the net during the Sabers’ regional semifinal win over Solon Thursday night in DeWitt. Schroeder led the Sabers with 14 kills on their was to a 3-1 victory.

The Central DeWitt varsity team celebrates after clinching a trip to the Class 4A regional final next week with a 4-set win over Solon.

Central DeWitt’s Lexy Cooper digs up a ball during the Sabers’ win over Solon Thursday.

DEWITT- With one final point, the Central DeWitt volleyball team clung to each other in the center of the court.

“This feels so great,” senior Elaina Schroeder said. “This hasn’t happened in so so long. We all knew we could do it, so the feeling of accomplishing that goal is just so amazing.”

They now move on to the regional final game next week.

“In our four years, we haven’t gotten this experience,” senior Ava Morris said. “Especially with the first round bye. To win and go on to the third round is just amazing.”

The Sabers were down by three points coming into the tail end of Set 4. A couple of Solon errors while the Sabers played solid defense catapulted them to within just one points.

A tip over the block fell to give the Spartans back a 21-19 lead, but then Elaina Schroeder put one away off the Solon block. Schroeder ended up leading the team with 14 kills.

“When we went and scouted we noticed the height advantage against the other middles,” Schroeder said. “We knew that we just had to swing high and aim corner, and it would be open.”

The two exchanged points. Down by one, senior Ava Morris positioned a big block in the middle and kept the Solon attack on the Spartan side. The solo block tied the game 22-22.

“I think we were just tired of losing,” Morris said.

“We played too hard with four matches tonight,” Schroeder said. “We just needed to get the job done.”

Schroeder came right back out and served an ace. The Spartans got a point, but the Sabers finished it out with two straight to take the fourth set.

Central DeWitt rolled the first two sets. They played some of their cleanest volleyball come out of the gates, also sporting high energy throughout the game.

“We’ve been practicing where we needed to be on the court,” Morris said about the defense. Morris had 18 digs on the night.

Allie Meadows had a team-high 20 digs, but six Sabers had double-digit digs in a solid defensive effort. Morris contributed her 18 and Elaina Schroeder and Isabelle Pierce had 14 a piece. Schroeder also had five blocks.

They jumped out to a 6-1 lead, then by the time Solon called a timeout they had the 16-6 double digit lead.

“We were just ready to go,” Schroeder said. “We had that mentality. We’re going out there, we’re winning, we’re making that Saber history that we haven’t had in a really long time.”

DeWitt didn’t miss a single serve in the entire first set. They ended up with nine aces, including four from Schroeder.

“Especially if there’s a big rally going and we miss a serve, it just gets us down,” Morris said. “We need to get our serves in every single time. It just helps us and our mental state.”

In Set 2, they did the same. DeWitt started the set with three straight kills from Schroeder swings and then an ace from Allie Meadows. They garnered an 11-1 lead before Solon got the side out.

Set 3 was the only set they gave up on Thursday night. The Sabers were behind most of the set as the Spartans started digging up more balls and getting into their own offensive groove.

As that happened, the energy dwindled a bit on the DeWitt side and mistakes started happening.

“When we make a mistake, everyone’s heads just go down,” Schroeder said.

Down by five, DeWitt almost made the comeback in the third set. Big swings from Schroeder and Morris and scrappy play from the back row put them within reach, but the Spartans put down a kill to finish it off.

In the regional final, the Sabers (17-12) will take on No. 2 ranked North Scott at The Pit in Eldridge.

And Schroeder: “We just have to know – we haven’t been to state in 20 years – and we have to want it. We have the ability.”

EPWORTH – The Clinton volleyball team couldn’t clinch a trip to the regional final, falling in semifinal play on Thursday night to No. 1 Western Dubuque.

Makayla Howard led the offense with 11 kills on the night. Payton Luett had four and Amelia Tubbs had three.

Tubbs and Howard both had two blocks a piece.

Trinity Smith had a team-high 11 digs for the back row. Ashtyn Dohrn had seven and Howard dug up six.