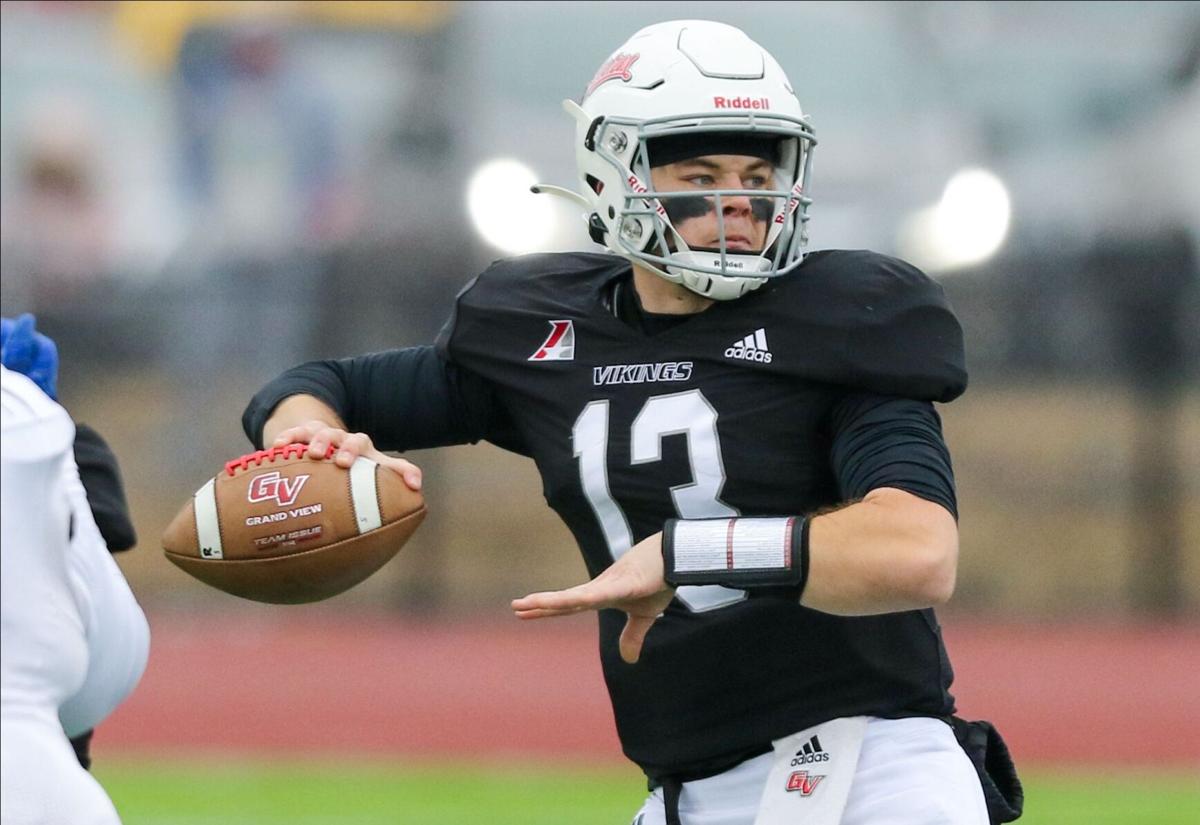 Former Clinton and current Grand View University starting quarterback, Johnny Sullivan, is a team captain for the Vikings and led the team to an undefeated season this year. 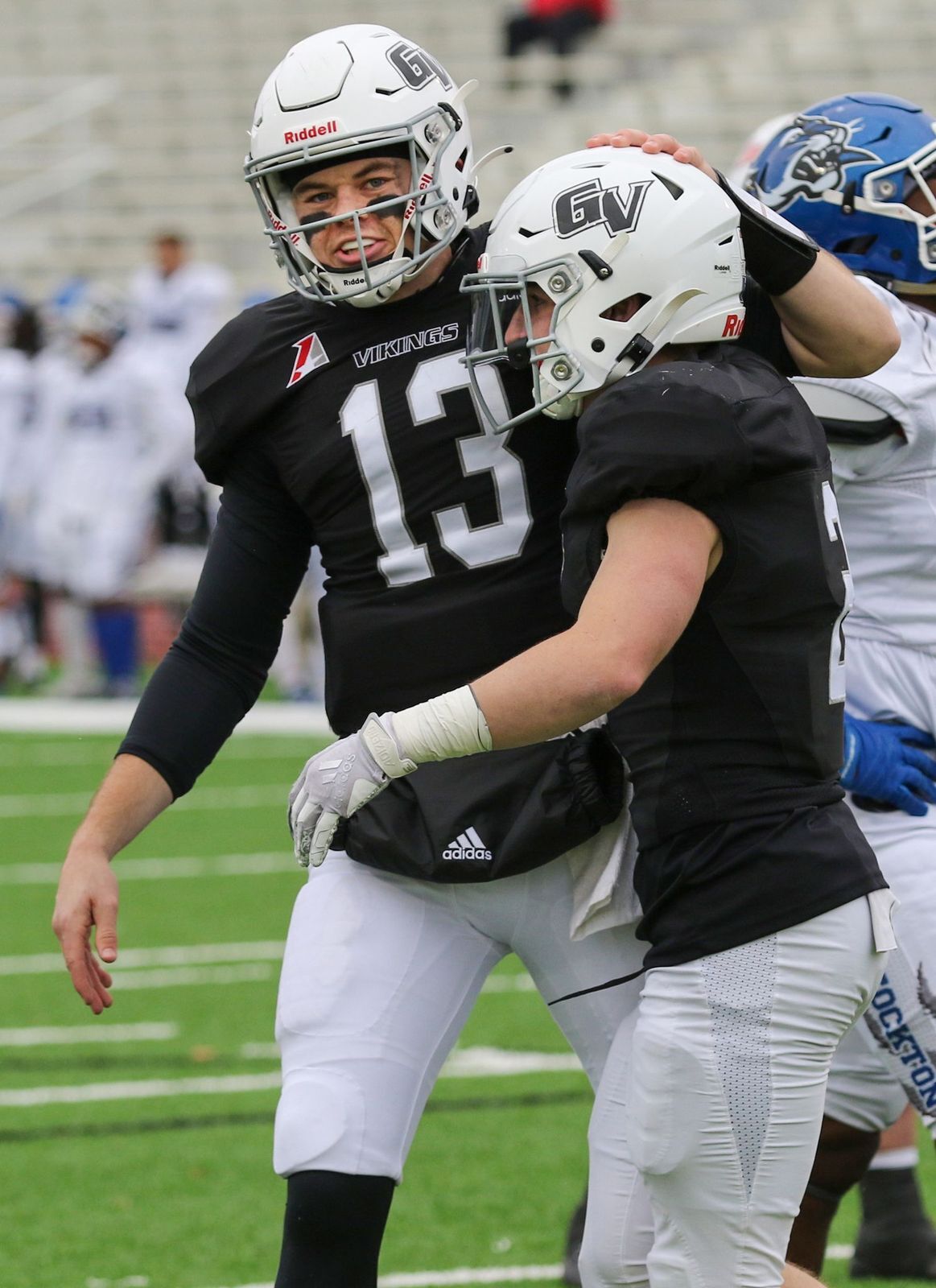 Grand View quarterback Johnny Sullivan (left) celebrates with a teammate during a game earlier this year.

Former Clinton and current Grand View University starting quarterback, Johnny Sullivan, is a team captain for the Vikings and led the team to an undefeated season this year.

Grand View quarterback Johnny Sullivan (left) celebrates with a teammate during a game earlier this year.

Grand View Vikings football offensive coordinator Derek Fulton said junior quarterback Johnny Sullivan is one of the best leaders to ever come through the program.

So even after a 6-0 regular season and putting up some of the top offensive numbers in the country, Sullivan is still looking for ways to improve.

That’s no surprise to Fulton.

“He was voted team captain by his teammates and it was a no-brainer,” Fulton said. “Just one of the best leaders that we’ve had.”

Sullivan led the Vikings to a 6-0 regular season after completing 86-of-130 passes for 1,183 yards with 21 touchdowns and four interceptions. The Vikings will have to wait until April 17 to begin the postseason, as it was delayed due to COVID-19.

“It definitely felt good to get all the pieces together,” Sullivan said. “We had all the talent in the world on the team this year. Before the season, I just wanted to make sure everyone was clicking, firing on all cylinders and bringing everything together. I think we did that.

“I do think we’ve got a lot of improvements to make. We definitely weren’t perfect. We have a lot of room to improve and that’s what I’m excited about.”

Last season, Sullivan led the Vikings to the playoffs after they also led the nation in many statistical categories, but he was injured in the first round and did not get to play in the team’s playoff semifinal game.

“None of the guys on the team had ever won a national championship here, so we got a little taste of it in the semifinals,” Sullivan said. “I unfortunately couldn’t play that game because I got hurt in the first round that year. I think how close we were, it motivated everybody for this season.”

The Vikings’ motivation was apparent all season long — they won all of their games by two possessions or more and won three games by 50 points or more.

Fulton credited Sullivan with much of the team’s success.

“He’s a heck of a player,” Fulton said. “Our offense runs through Johnny. He makes everything go for us offensively. This is one of the most successful seasons we’ve had. He’s making good decisions with the football — he knows when it’s the right time to take a shot downfield and when it’s a good time to check it down. One of the best practice players I’ve ever been around. He brings a good attitude everyday.”

The team persevered through several postponements and schedule changes due to COVID-19.

“Our team’s mantra this year was, ‘Next,’” Sullivan said. “We had a couple games canceled, so we had to focus on the next week and as far as preparation and on-field play, I don’t think it was any different because right when the game starts, it’s still football, it’s still the same game. No one’s going to make an excuse for you because of COVID, if you lose.”

Sullivan transferred to Grand View, which competes in the NAIA, last year after initially beginning his career at the University of Northern Iowa. After graduating from Clinton in 2017, Sullivan had an offer from Grand View but chose to be a preferred walk-on at UNI. He spent three semesters and two football seasons with the Panthers, but decided to transfer after things didn’t work out in Cedar Falls.

“I came here and I’ve loved it ever since,” Sullivan said. “Grand View’s awesome. It’s in Des Moines, it’s in the big city. The campus is awesome. Everybody gets along, it’s a great team environment and we usually win on the weekends. It’s probably one of the most tight-knit teams I’ve been a part of.”

Sullivan was not immediately the starter upon arriving at Grand View, but worked his way up the depth chart.

“It’s not easy coming to a new school,” Fulton said. “You’re trying to balance fitting into a new place and just simply learning the campus. It’s a different weight room, different strength program and on top of that, Johnny’s so competitive that he wanted to be the starting quarterback. He wanted to make sure he was doing everything the right way.

“He’s a perfectionist, so he wants to be perfect in all that he does.”

The Grand View coaches will only be allowed limited contact with the players over the next few months, but the players are free to workout and keep in shape on their own. Fulton said Sullivan’s leadership skills will be needed over the long winter.

“Johnny’s leadership is going to be pretty important here in the next couple months, just with him grabbing guys and running through the offense just to keep that timing and chemistry down with those guys,” Fulton said. “It’s going to be different, but part of it is they need to get away for a little bit. They need a little mental break. It was a long season even though we only played six games. They need to get away and rest their bodies a little bit, but it’s going to be important for them to get back after this Thanksgiving break and start getting back into it.”

Once the postseason begins, Sullivan’s goal is straightforward.

“Just to win every game,” Sullivan said. “Whatever it takes.”