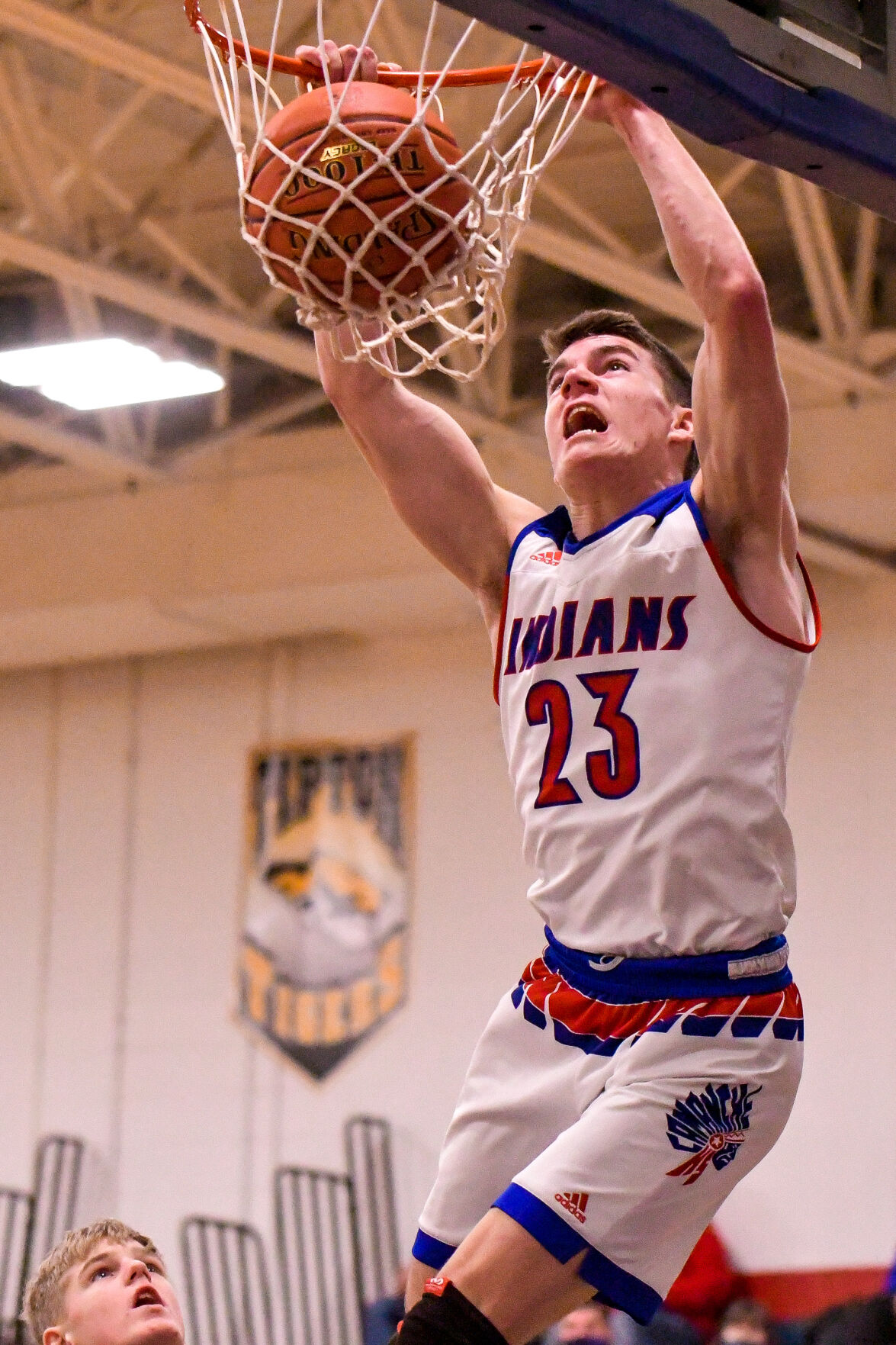 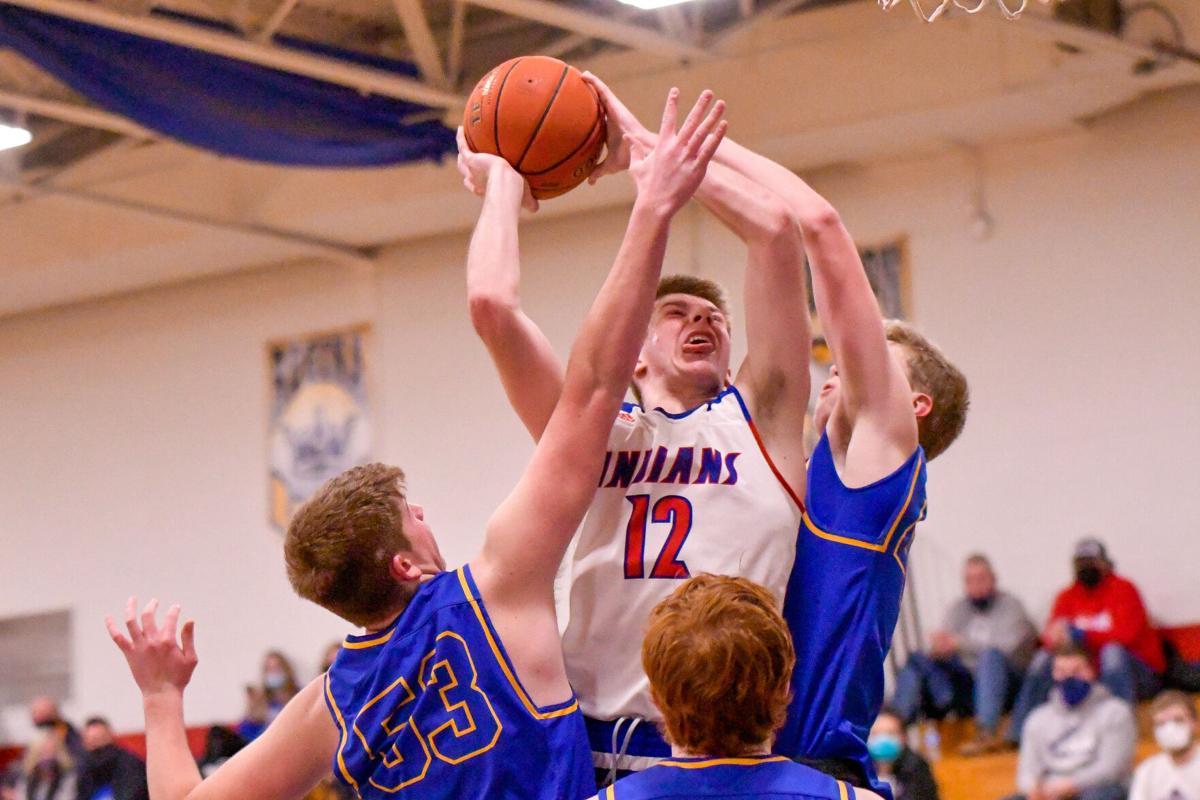 Camanche’s Zach Erwin (No. 12) fights through Wilton defenders during the Indians postseason win Feb. 18 at Camanche. 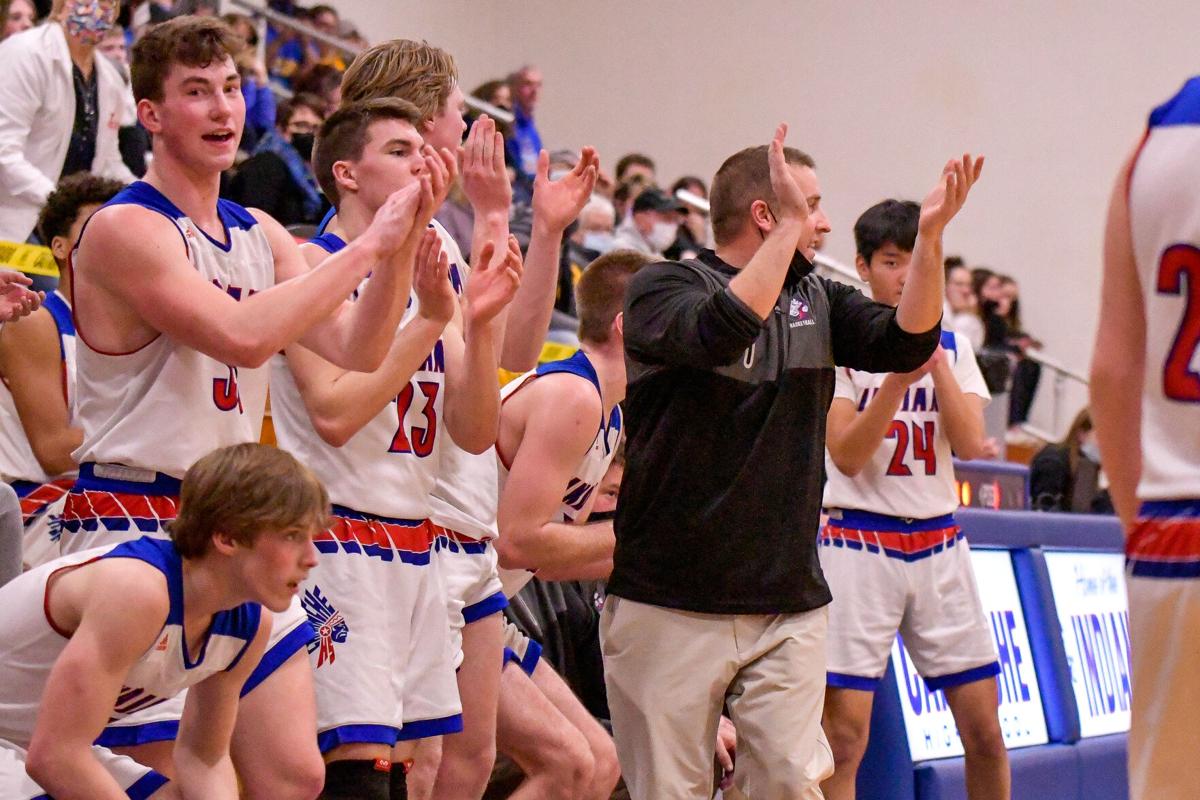 The Camanche bench celebrates during the win over Wilton Feb. 18 at Camanche.

Camanche’s Zach Erwin (No. 12) fights through Wilton defenders during the Indians postseason win Feb. 18 at Camanche.

The Camanche bench celebrates during the win over Wilton Feb. 18 at Camanche.

CAMANCHE – With a fan reaction that sent the walls of the Camanche High School gym rattling, senior Zayne Feller came down from a two-handed slam with a yell. After a quiet three quarters, it was just the momentum the Indians needed early in the fourth.

“I was struggling the whole game and couldn’t get shots to fall,” Feller said. “When I finally got that dunk, it was exciting and I was happy to actually get something going.

“A dunk is just a huge momentum swing for the team. After that, they called a timeout and we came out and kept getting steals and scoring.”

After the dunk, three more dunks off the hands of Zane Witt and Jordan Lawrence followed in a flurry of points that sent the Indians rolling to a 67-51 victory over Wilton in the postseason opener. Camanche outscored Wilton 20-10 in the final quarter.

It didn’t start out that way, though. The Indians came out of the gates tight. They struggled to get the calls and the points they wanted in the lane as a physically aggressive Beaver lineup collapsed on their drive attempts.

After one particularly rough string of shots, Feller came down with a frustrated yell as he fell back for defense.

“We just needed to get our buckets,” head coach Josh Davis said. “I think we were looking for contact a little too much, not looking to finish. Sometimes when you’re missing those point blank shots it gets in your head a bit, but you just have to stay the course and play your game, we finally wore them down.”

The Indians gave up 10 offensive rebounds, most coming in the first half of the game.

“They [Wilton] were just hustling to get those balls,” Feller said. “We just have to work harder, box out, and get to the loose balls like they were. We need to work.”

Even with shots not falling inside, the Indians managed to stay with the Beavers. Mike Delzell drained three 3-point shots in the first ten minutes of the game to help keep the points even, while bench players Tucker Dickherber and Logan Shaw made big defensive moves.

“Our balance is just so good,” Davis said. “A little bit out of everybody tonight.”

It led to a tied contest at halftime, the score knotted at 29-29.

The third quarter started with a Wilton point, but Camanche junior Zach Erwin took the lead. He started finding the holes in the lane and using his length to get over the Beaver defense. By the end of the third he had 19 points on his way to a game-high 26, and helped push the Indians to a six-point lead.

“I think I just had to be more aggressive,” Erwin said. “In the first, I wasn’t really looking for it and my shot was off. I just had to keep going.”

Erwin kicked off the fourth with a three and it was followed immediately by Feller’s dunk. After that, the Indians loosened up and things started happening.

“In the beginning, we were nervous,” Erwin said. “In the second half we started to relax and started to get more aggressive. The dunks really opened everything up. It gets the crowd going, gets us going and is just a cool play that happens.”

Zane Witt found the rim from his spot on the block, then senior Jordan Lawrence got two consecutive passes for huge slams that sent the crowd into a frenzy. Lawrence ended up with 12 points, and junior Mike Delzell pitched in another 11.

“We have to come out more aggressive,” Erwin said. “We have to work harder in the beginning of the game and not let our nerves get to us.”