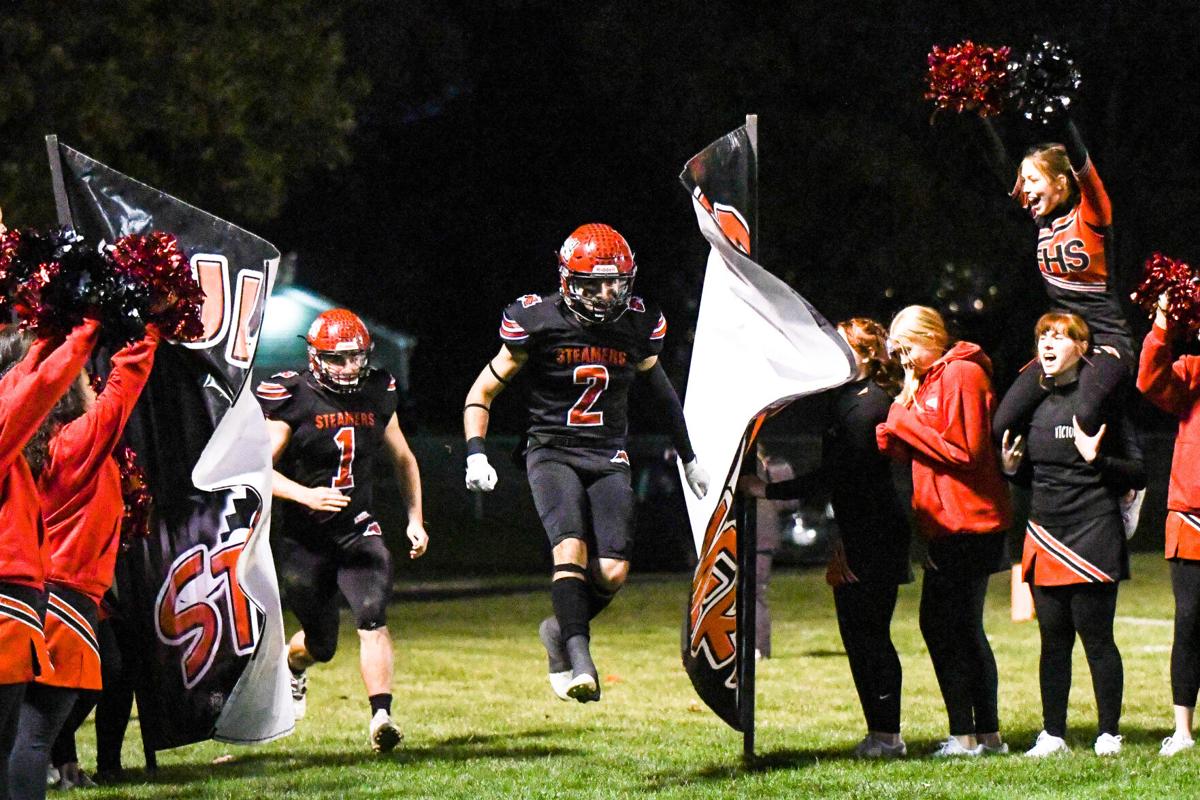 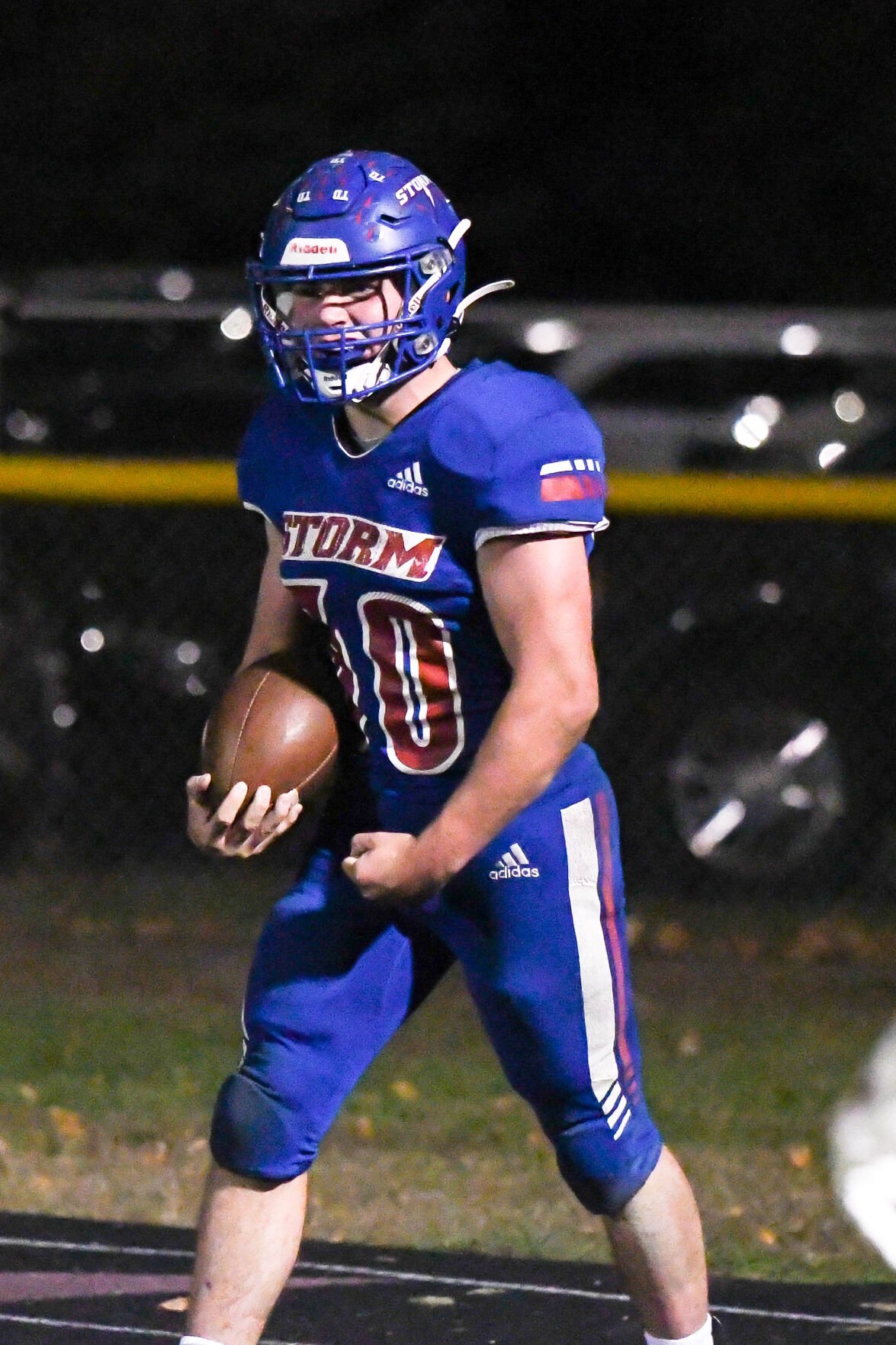 Camanche’s Eric Kinkaid reacts after scoring a touchdown during the Storm’s win over Wahlert Catholic in round one last week.

Camanche’s Eric Kinkaid reacts after scoring a touchdown during the Storm’s win over Wahlert Catholic in round one last week.

We’re in Week 10 of the 2021 football season. All regular seasons have wrapped up and there are still three local teams competing in their respective postseason tournament.

Two have advanced into the Iowa state quarterfinals – a win this week would send them to the semifinal round at the UNI-Dome in Cedar Falls.

Illinois kicks off their first round this week, and we’re looking at a Saturday matinee in the Class 1A matchups.

Here’s where our teams are headed:

The Storm rallied from an early deficit to take down Wahlert Catholic in the first round 35-20. They’ll go on the road from here on out, and face their toughest opponent this year in No. 2 ranked Waukon.

The Indians come in with a powerful runningback in senior Pat Hennessy. Hennessy comes in with 141 rushing attempts and 1429 yards for 21 touchdowns. The Storm have runningback Eric Kinkaid with 854 yards.

Waukon has 136 passing attempts compared to their 262 rushing attempts.

The Storm have 1701 yards in the air from quarterback Michael Delzell, Tucker Dickherber

Eric Kinkaid also leads the Storm in tackles with 75. The leading tackle for Waukon is Hennessy with 60.5.

The Indians have the Storm on tackles for a loss, with six more on the year. They both have similar numbers in interceptions and in sacks.

The No. 3 River Hawks still don’t have a loss on their record, blowing by first-round opponent Dunkerton 69-8 in the first round.

They welcome the Bears from English Valleys this week to Preston.

They’ll be looking to stop the Bears on the ground, where English Valleys does most of it’s damage. Bears runningback Beau Flanders has 1520 yards on the ground coming in. The Bears rush three times more than they pass and have 2055 team yards.

The River Hawks have their threats in the air, too. Quarterback Conor Gruver has completed 115 passes for 2029 yards and 36 touchdowns so far this year, compared to just two touchdowns in the air for the Bears. Hayden Felkey has pulled down 29 catches for the River Hawks for 771 yards and 16 of those 36 scores.

The River Hawks have double the tackles for a loss as a team, knocking back 114 plays. They have four more interceptions and five more sacks as well.

Andin Farrell is leading the orange and gray in tackles with 85 tackles, three sacks and 24 tackles for a loss. The leading tackle for the Bears is Kaden Hall with 63.

CLASS 1A FIRST ROUND

Fulton ended their regular season in Week 9 the best way they could. They shut out visiting Dakota 41-0 and head into the postseason with a state ranking. They welcome Chicago Raby on Saturday afternoon to their home turf.

Fulton is coming in with just two losses. They have 1041 yards through the air and 1628 on the ground.

Their quarterback, Patrick Lower, has 547 of those yards (missing games due to injury). Brock Mason has been the favorite target on the year with 24 catches an 414 receiving yards (6 touchdowns). Jacob Jones had 272 and Baylan Damhoff had 169.

Keegan VanKampen is the leading rusher. VanKampen has 856 yards through the first nine games, scoring 15 touchdowns for the Steamers. Jacob Jones had another 530 yards and Ryan Eads also has triple digits.