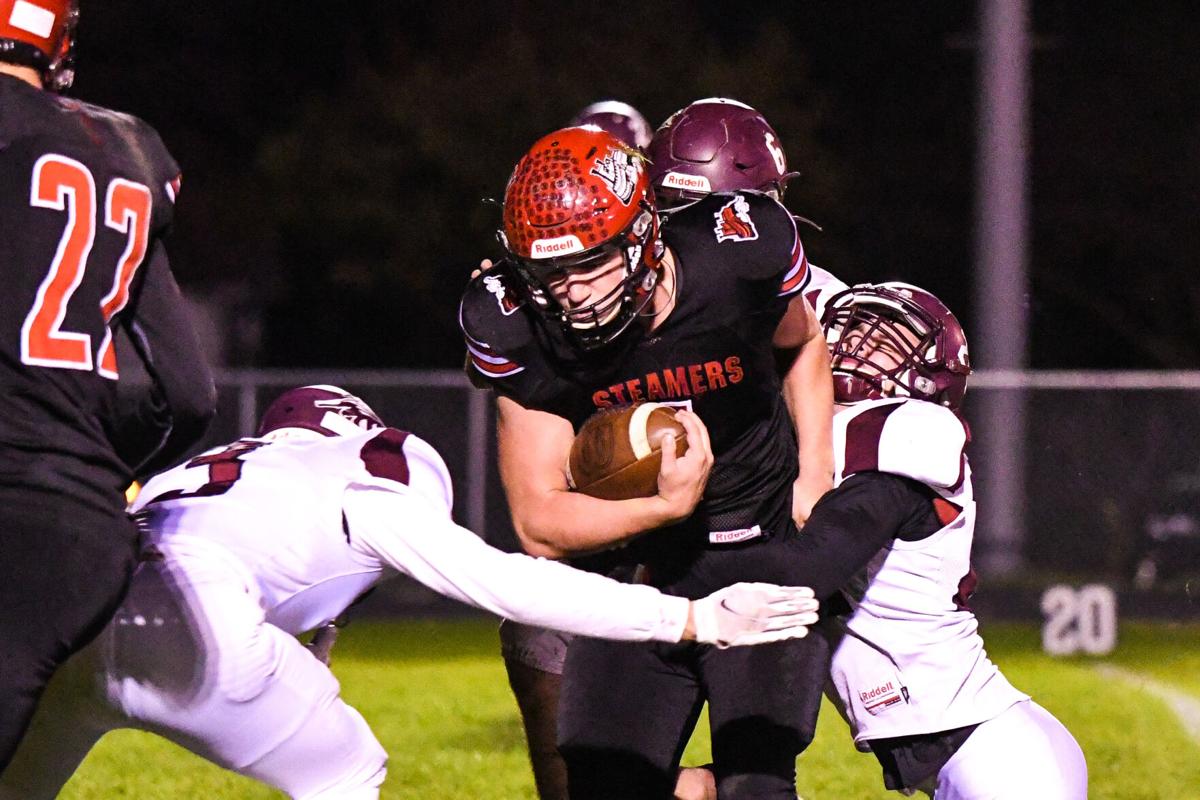 Fulton senior Keegan VanKampen runs with the ball during the Steamers’ 41-0 win over Dakota in the final week of the regular season. 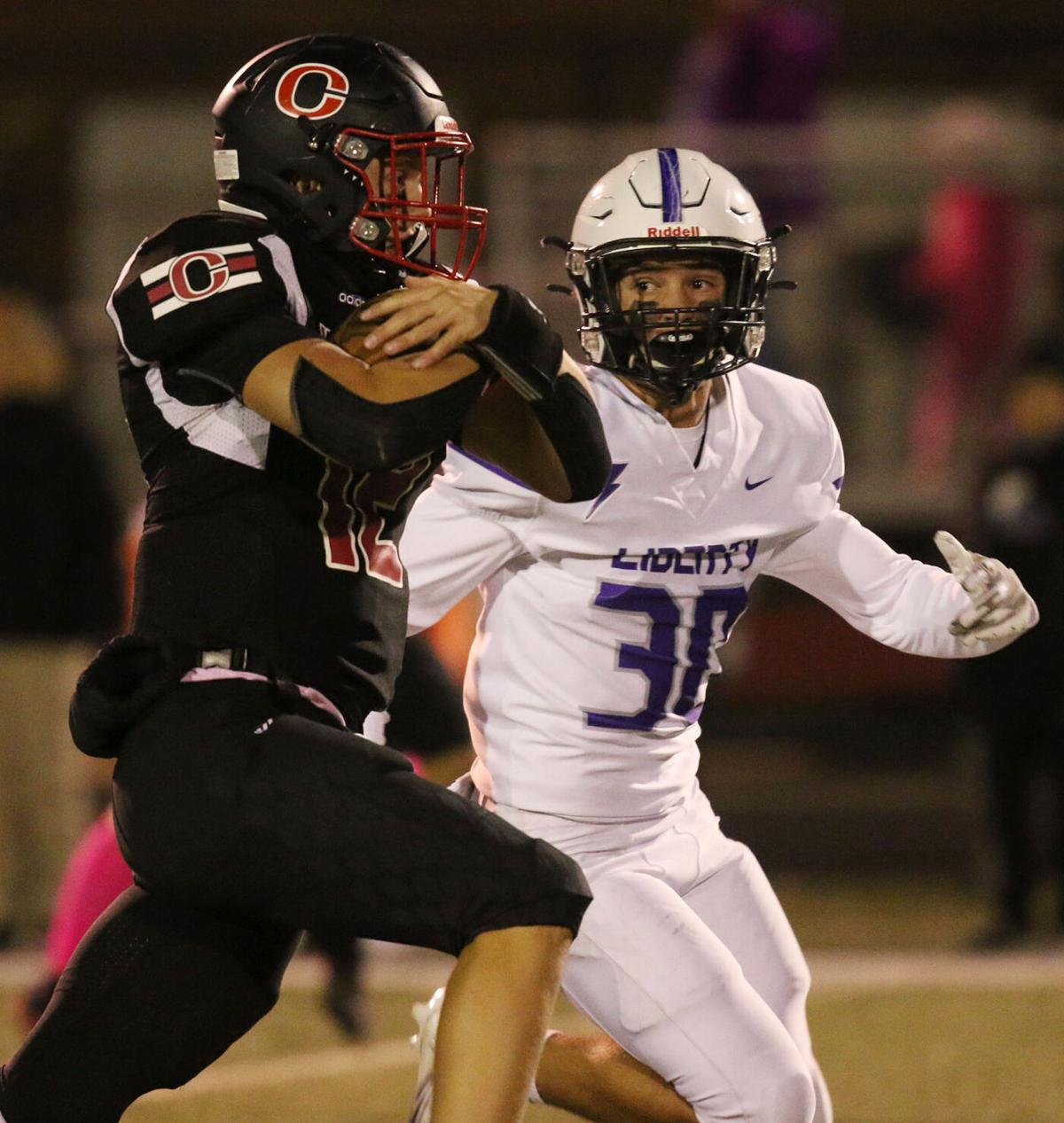 Fulton senior Keegan VanKampen runs with the ball during the Steamers’ 41-0 win over Dakota in the final week of the regular season.

FULTON, Ill. – The Fulton Steamers finished their regular season with a dominant 41-0 shutout win over Dakota on Friday night, keeping momentum heading into the Illinois Class 1 A postseason.

The Steamers clinched their trip to the postseason last week with a win over EPC.

The Steamers struck early on. Senior Brock Mason started with a big return to the Indians’ 36 yard line. Two straight runs by Keegan VanKampen put the Steamers at the 11.

A pass play to Ryan Eads had them at the four but Fulton couldn’t find an opening. They settled for a field goal on their first drive, taking a 3-0 lead at 8:05 – a lead they would never relinquish.

The Indians made a big run and a couple consecutive plays to have the ball on the 20, but Steamer defense stepped up. A couple of tackles for a loss and then Dakota was looking at a fourth down. Ryan Eads had coverage on the pass attempt and the Steamers took over the ball again.

A 21-yard pass play to Brock Mason kept the drive moving, and it ended in a 10-yard run by Keegan VanKampen to score the first touchdown of the game just seconds into the second quarter.

The Steamers would go on to score two more touchdowns and one more field goal before halftime. VanKampen scored another on a 25-yard run, and then Jacob Jones pulled down a 20-yard pass from Patrick Lower for another. Endi Quanaj kicked the field goal.

The Steamers ended with 208 rushing yards and 112 passing yards on 10 completed passes from Lower.

The Steamers improve to 7-2 and now are waiting to hear their playoff pairing to see what their first round fate will be.

WELLMAN – Despite a huge comeback effort, the Northeast Rebels exited the 2021 postseason Friday night after a 35-28 loss to Mid-Prairie on the road.

The Rebels trailed by 35-14 in the third quarter and mounted a comeback effort. They didn’t have enough time to get their final touchdown on the board.

The Rebels end their season 4-5, making their first playoff appearance since 2009.

No. 3 River Hawks fly through first round

PRESTON – A still-perfect record pushed the No. 3 ranked Easton Valley football team easily through the first round of the 8-man playoffs, beating Dunkerton 69-8 in Preston Friday.

It’s the third straight season the River Hawks find themselves in the state quarterfinals.

Charlie Simpson rushed for 182 yards on the night, good for four touchdowns. Carson Fuegen ran in one and Kyler Wilson ran in another.

Quarterback Conor Gruver was good for 295 yard through the air on Friday, completing 12 of his 15 pass attempts for four touchdowns.

Carson Fuegen had two interceptions and Dylan Dyson had a fumble recovery for the River Hawks. The two also led the defensive effort with 7.5 tackles a piece while Hayden Felkey had 7.

The River Hawks (9-0) will await their state quarterfinal opponent.

CLINTON – The Clinton River Kings ended their season on Friday night in front of their home crowd, falling 45-13 to Iowa City Liberty.

The two had just one possession each in the first quarter. The Lightning struck first, but the River Kings had an answer. An 8-yard pass to Devan Gallant from quarterback Jai Jensen with less than a second remaining in the half gave the Kings a touchdown. The kick was no good, but Clinton closed the gap to 7-6.

Late in the second quarter, a 20-yard touchdown extended the Liberty lead.

The final score came late in the final quarter with the game clock running continuous. A big 55-yard run from Jensen put the Kings in striking distance at the 15, and Tavian Bailey finished out the play with an 8-yard touchdown run.

Jensen was 11-for-18 for 164 yards on the night. Jensen ended his career with nearly 3,500 passing yards in his career – a program record. His 89 rushing yards gave him nearly 2,000 total yards this season.

The River Kings end their season 2-7.

Benton struck first, but the Sabers managed to score their own touchdown to only trail 12-7 halfway through the second quarter. The Bobcats put one more touchdown on the board before the half.

The Sabers were trailing 26-7 after three quarters and scored earlier in the foruth to cut the lead. They never got closer than 11 in the final quarter of play.

The Sabers end their season 5-4.