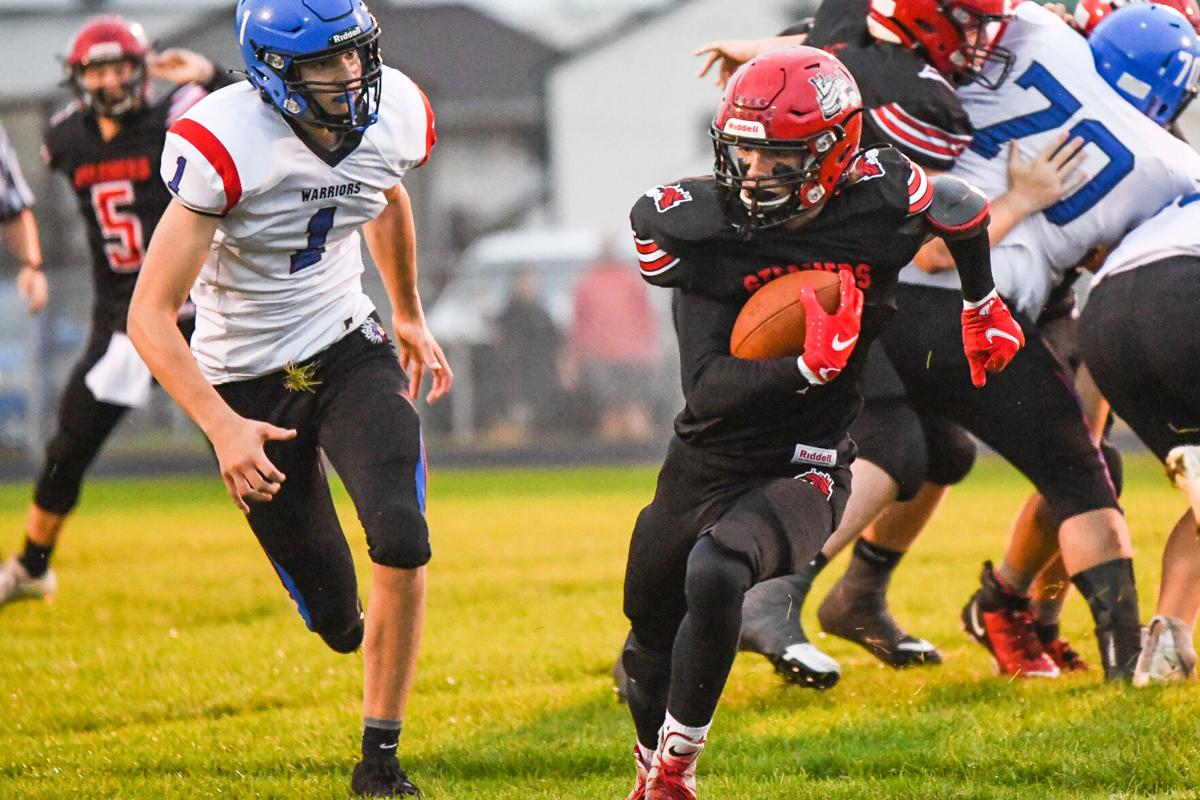 In this file photo, Fulton’s Jacob Jones runs with the ball during a Fulton home game. The Steamers beat Forreston at home on Friday night in an upset win 24-14. 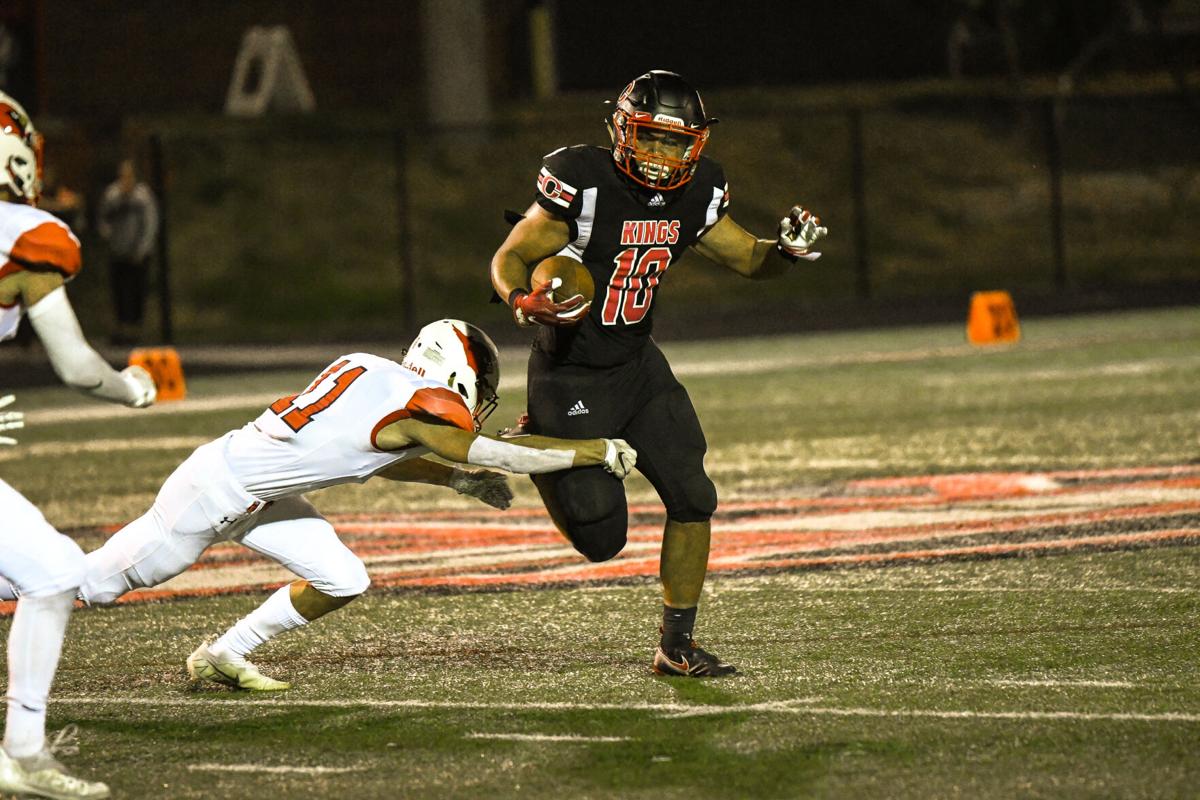 In this file photo, Tavian Bailey of Clinton avoids a tackle on a run during a Clinton home game. The River Kings lost 41-7 to North Scott at home on Friday.

In this file photo, Fulton’s Jacob Jones runs with the ball during a Fulton home game. The Steamers beat Forreston at home on Friday night in an upset win 24-14.

In this file photo, Tavian Bailey of Clinton avoids a tackle on a run during a Clinton home game. The River Kings lost 41-7 to North Scott at home on Friday.

FULTON, Ill. – The Fulton Steamers stayed in the playoff race with a big upset win over No. 5 ranked Forreston 24-14 at home on Friday night.

“That was a fantastic football game,” Fulton head coach Patrick Lower told KCLN Radio after the win on Friday. “I’m just so proud of our kids. Coaching can only take these kids so far, they still have to go out there and perform on a Friday night and these kids performed their butts off. They played four quarters of physical football.”

The Steamers solidified their win with a huge offensive play from runningback Jacob Jones. Jones got the ball and made a 30 yard pass play to give Fulton their 24-14 lead.

“I wanted to go to that play earlier, but we ended up running in this way,” Lower said. “All you’re hoping there is that their safeties bite, and they did.

“It’s one of those things where you just lull them to sleep … we can call it, but they have to execute it and they did. What a nice way to end that game.”

Fulton struck fast. Jacob Jones found the endzone with 5:31 left in the first quarter to put the Steamers on the board. A field goal gave them a 10-0 lead.

“We gave a lot of rushing yards against some teams this year when they came in here,” Lower told KCLN. “We did a really nice job tonight. They earned everything they got.

“Our kids were flying around, talking and executing. Just a really good night for Fulton.”

Forreston responded before the end of the half, but Fulton made sure they had a bigger lead going into the half. Brayden Dykstra made a pass play to Keegan VanKampen to put the Steamers up 17-8.

“[Dykstra] did a really nice job and we knew he would,” Lower said about Dykstra. Just because we’re using our back up quarterback doesn’t mean we’re going to do the game different. We’re very confident in Brayden Dykstra. He’s a confident player.”

The Cardinals cut the lead again, but Fulton had the 17-14 lead heading into the locker room.

The Steamers (5-2) go on the road next week, taking on EPC in Lanark. EPC hasn’t had a win yet this season. Fulton returns home against Dakota to end their season in two weeks.

“We’ll get focused on them on Monday,” Lower said. “We’ve got a good, smart group of football players. They know what the task at hand is, and the task is to get that sixth win and close that playoff spot.”

CLINTON – The Clinton football team fell to a ranked North Scott 41-7 on Friday night at home.

North Scott, who hasn’t lost this season and holds the No. 1 ranking in Class 3A, scored 24 unanswered points

The River Kings didn’t score until early in the fourth quarter. A pass play put them on the board, still trailing 24-7.

Clinton falls to 1-7 on the year. Next week, the River Kings go on the road to take on Mount Pleasant. They’ll return home before the end of the season, welcoming Iowa City Liberty to Coan Field on Oct. 22.

PRESTON – The Easton Valley football team is heading into Week 8 of the football season with a perfect record, defeating Edgewood-Colesburg 60-14 in Preston.

After the first quarter of play, the River Hawks held a 26-14 lead – one of their smallest leads of the season after 12 minutes of play. The defense shut Ed-Co out from there, scoring 24 unanswered points in the remaining three quarters.

Conor Gruver threw for 185 yards and one touchdown on the night, Hayden Felkey pulling down that scoring pass. Felkey ended with 83 receiving yards.

Charlie Simpson ran for 150 yards and finished with six touchowns on the night. Andin Farrell also ran in a score.

Andin Farrell led the team with 12 tackles, five for a loss. Dillon Beck had seven and three for a loss, and Carson Fuegen finished with five.

The River Hawks (7-0) have their biggest test of the season next week, heading on the road to face Kee.

VINTON – The Central DeWitt Sabers held on for a one-touchdown win on Friday night, taking down Vinton-Shellsburg 14-7 on the road.

It was a low-scoring and defensive affair. The Sabers scored on their first drive, but took seven minutes off the clock to do it.

By halftime, that 7-0 lead was still the only points on the board.

After an interception in the third quarter, the Sabers made a short pass play to take the two-score lead.

Vinton-Shellsburg cut that lead in half, but the Central DeWitt defense held back the advances until the final buzzer.

The Sabers (5-2) come back home in Week 8, hosting Benton Community in DeWitt.