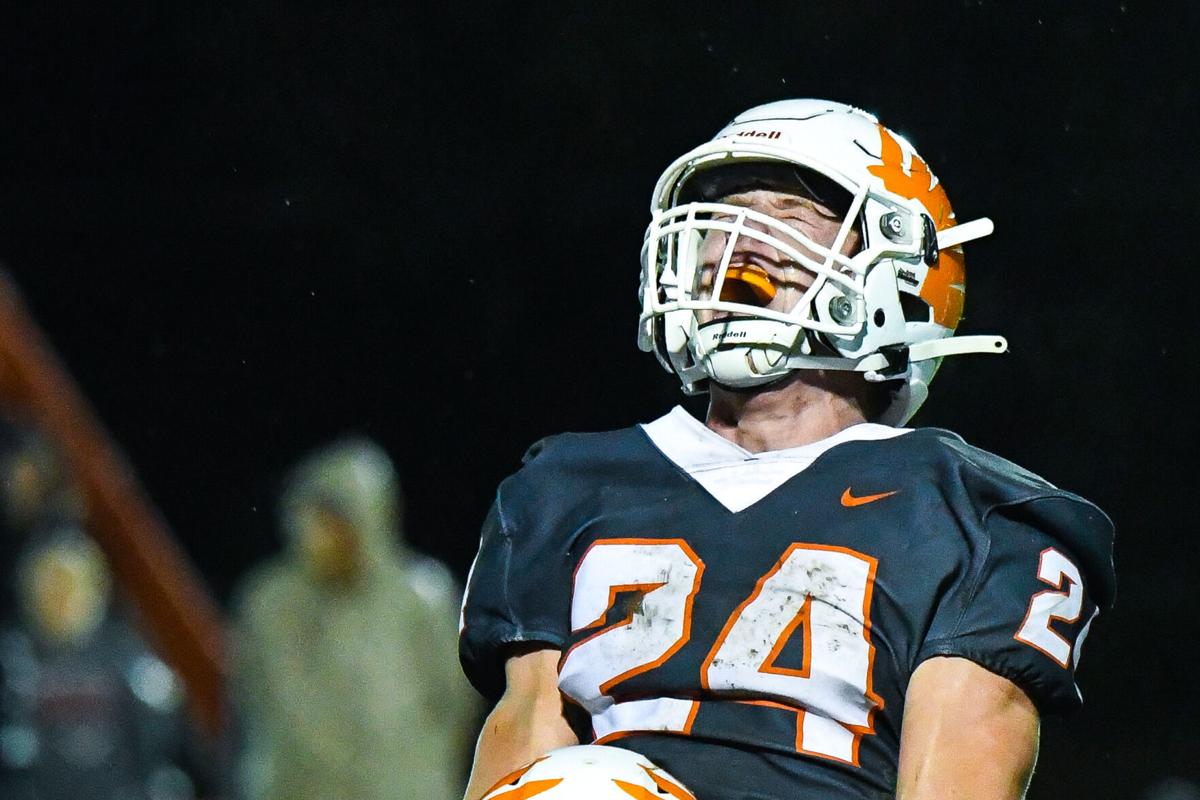 In this file photo, Easton Valley’s Hayden Felkey celebrates after a River Hawk stop against Central City. The River Hawks stayed perfect on the year with a 73-0 win over Calamus-Wheatland on Friday night. 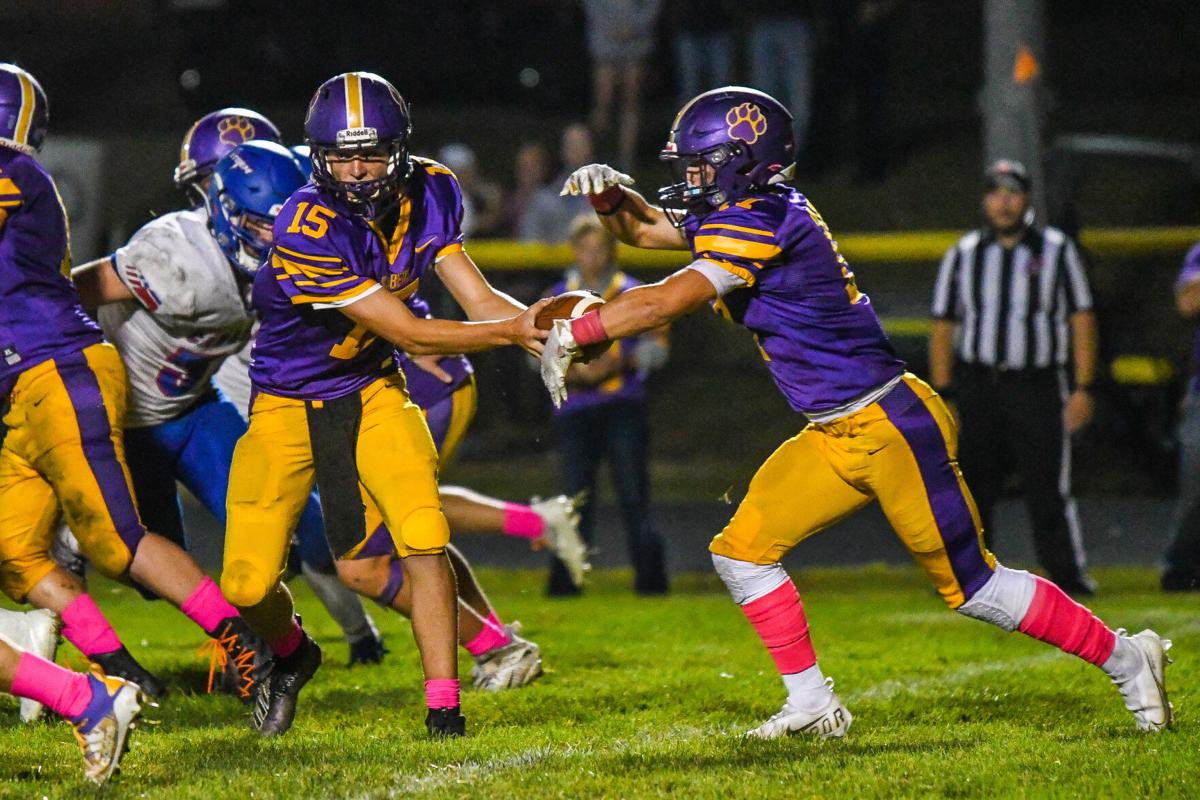 In this file photo, Central DeWitt’s Tyler Herrington gets a handoff from quarterback Paul Kuehn during a previous game. Central DeWitt beat Maquoketa 26-10 on Friday night.

In this file photo, Easton Valley’s Hayden Felkey celebrates after a River Hawk stop against Central City. The River Hawks stayed perfect on the year with a 73-0 win over Calamus-Wheatland on Friday night.

In this file photo, Central DeWitt’s Tyler Herrington gets a handoff from quarterback Paul Kuehn during a previous game. Central DeWitt beat Maquoketa 26-10 on Friday night.

WYOMING – The No. 3 Easton Valley football team didn’t disappoint on the road on Friday night, taking down Calamus-Wheatland 73-0 in dominant fashion to keep perfect on the year.

The River Hawks started 2020 5-0 as well, but fell in Week 6 to Don Bosco. They’re currently at 6-0 for the second time in the last three years.

Quarterback Conor Gruver connected on nine of his 12 pass attempts for 195 yards and five of the team’s touchdowns. Gruver moved the passing around, with four different receivers pulling in touchdown passes. Carson Fuegen had two touchdowns in his three receptions. Brig Borman finished with 80 yards and a score. Both Ethan Farrell and Hayden Felkey scored once with 40 reception yards too.

Four different athletes scored rushing touchdowns for the River Hawks – Charlie Simpson, Hayden Felkey, Carson Lee, and Dillon Beck. Simpson finished with two of those, leading all rushers with 102 yards. Ayden Huling had 55 and Felkey another 40.

The River Hawks (6-0) will try to stay undefeated through Week 7 with a home game next week, welcoming Edgewood-Colesburg to Preston. Ed-Co is currently 4-1. The River Hawks wrap up their regular season with a game against undefeated Kee on the road.

WEST LIBERTY – The Northeast football team extended their winning streak to four games and stayed perfect in Class 2A District 5 play with a 20-17 win over West Liberty on the road on Friday night.

It came down to the wire once again for the Rebels. With just over four minutes remaining in the game West Liberty connected on a 58-yard pass and added the two-point conversion to cut the lead to three.

When the Comets got the ball back, the Rebels were able to hold their offense to just a field goal attempt.

Northeast made a couple of huge defensive stops besides the final field goal. One came at the very beginning of the fourth quarter. Leading by 13, the Comets had the ball on the Northeast 3-yard line. The Rebels pushed them back on two consecutive plays to take over the ball on downs.

The Comets were the ones to push the first points across the board.

The Rebels had answers. They scored twice before the half, including a run with just 26.3 seconds left in the half to take the 14-7 lead into the locker room.

The Rebels (4-2) come back home next week, welcoming local and district rival Camanche. The Rebels are currently undefeated in district play, while the Storm lost to Monticello in Week 6.

FORT MADISON – The Clinton River Kings had Fort Madison on the run, but couldn’t sustain it in the second half a fell 58-14 on the road.

After the first quarter, the two were knotted 7-7.

Even by halftime the Kings had kept in the game. Jai Jensen pushed in a second touchdown right before the half to cut the Fort Madison lead to 24-14.

The Bloodhounds came out with a 75-yard drive to open the second half and continued to score 34 unanswered points to end the game.

DEWITT – The Central DeWitt football team picked up another win Friday night, taking down Maquoketa 26-10 at home on homecoming night.

Central DeWitt went 3-and-out on their first drive, and Maquoketa took the opportunity. Although the Sabers kept them out of the endzone, the Cardinals finished the drive with the field goal to take a 3-0 lead.

The Sabers didn’t put numbers up until three minutes into the second quarter. Quarterback Paul Kuehn found Joshua Lippens for a three-yard touchdown pass after a 76-yard drive. The Sabers took the 7-3 lead and never looked back.

The Sabers put another score on the board before halftime, this one a 7-yard touchdown run by Ben Pace. Pace ended up with two touchdowns and over 200 rushing yards on the night. His final score was a 46-yard scoring run with just under nine minutes to pay to solidify the final score.

The Sabers (4-2) travel for Week 7 competition, heading to Vinton-Shellsburg next week.

Fulton moves back to win column

STOCKTON, Ill. – The Fulton Steamers rebounded from a big loss to the No. 1 team in the state with a dominant win Friday night on the road, taking down Stockton 42-13.

“We came out ready to play tonight and it was a really good game for us,” head coach Patrick Lower said. “For the second time this year, we started with a kickoff return for a touchdown.”

The Steamers started the game with a kickoff return for a touchdown, a fast start that helped kick off the night.

The Blackhawks scored immediately after that, the Steamers breaking down on defense. That was the only point the two were tied in the contest.

“We had them really well scouted,” Lower said. “We were worried about a couple of things. They caught us off guard a little when they had another quarterback in there, they hadn’t shown that and it was really smart on their part. All and all, our kids stayed focused

By halftime, the Steamers had a two touchdown lead. They went to the break up 21-7.

Brayden Dykstra was filling in for quarterback Patrick Lower, who was still out with injury Friday night.

“He did a great job filling in at quarterback for Patrick tonight,” Coach Lower said. “I told him on Monday, if Patrick can’t play you’re in there, and we’re not changing anything we do because we know you can do it. He had a fantastic night tonight.”

Keegan VanKampen finished the night with four touchdowns for the Steamers.

“He had a great second half carrying the ball and carrying the load,” Lower said. “They kept giving that play to us and we just kept taking it.”

The Steamers (4-2) come back home next week, welcoming Forreston to their home turf. The Steamers sit at 3-2 in the conference and are still in the playoff conversation with their win.