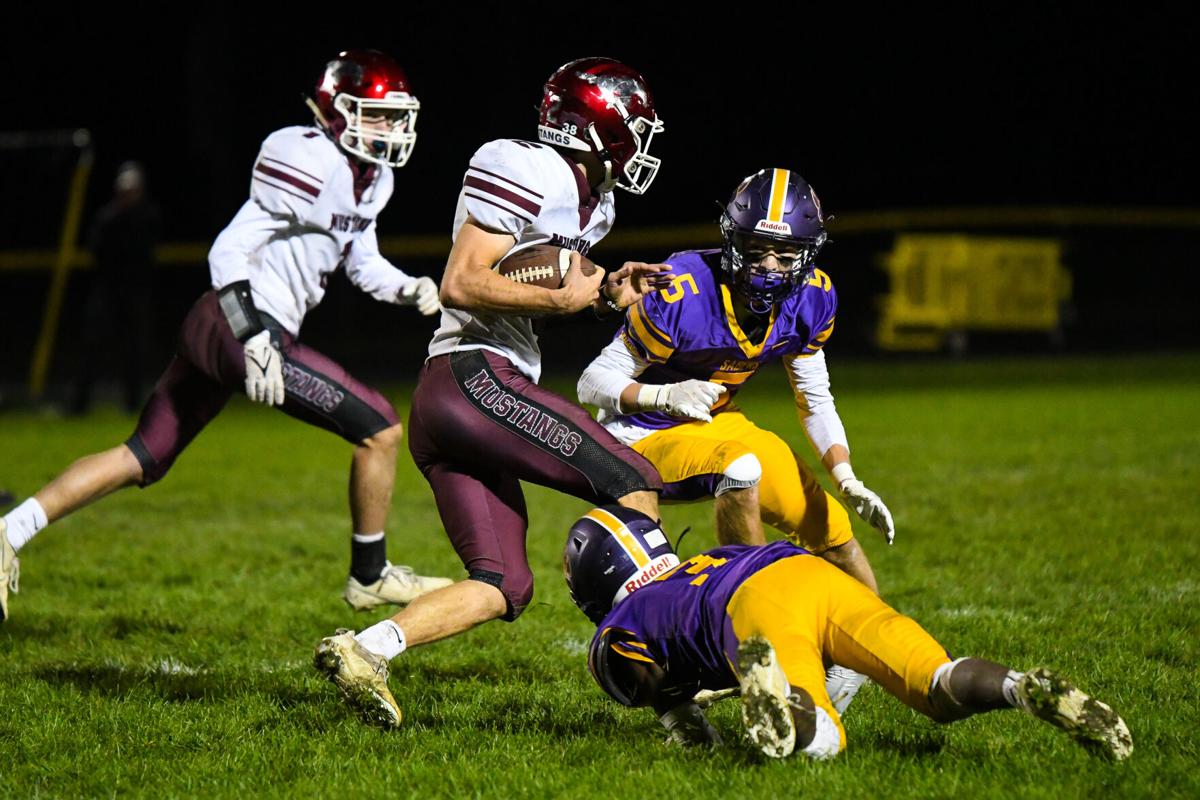 David Harper and Gibson McEwan try to make a tackle on Friday night during the Sabers’ loss to Mount Vernon. 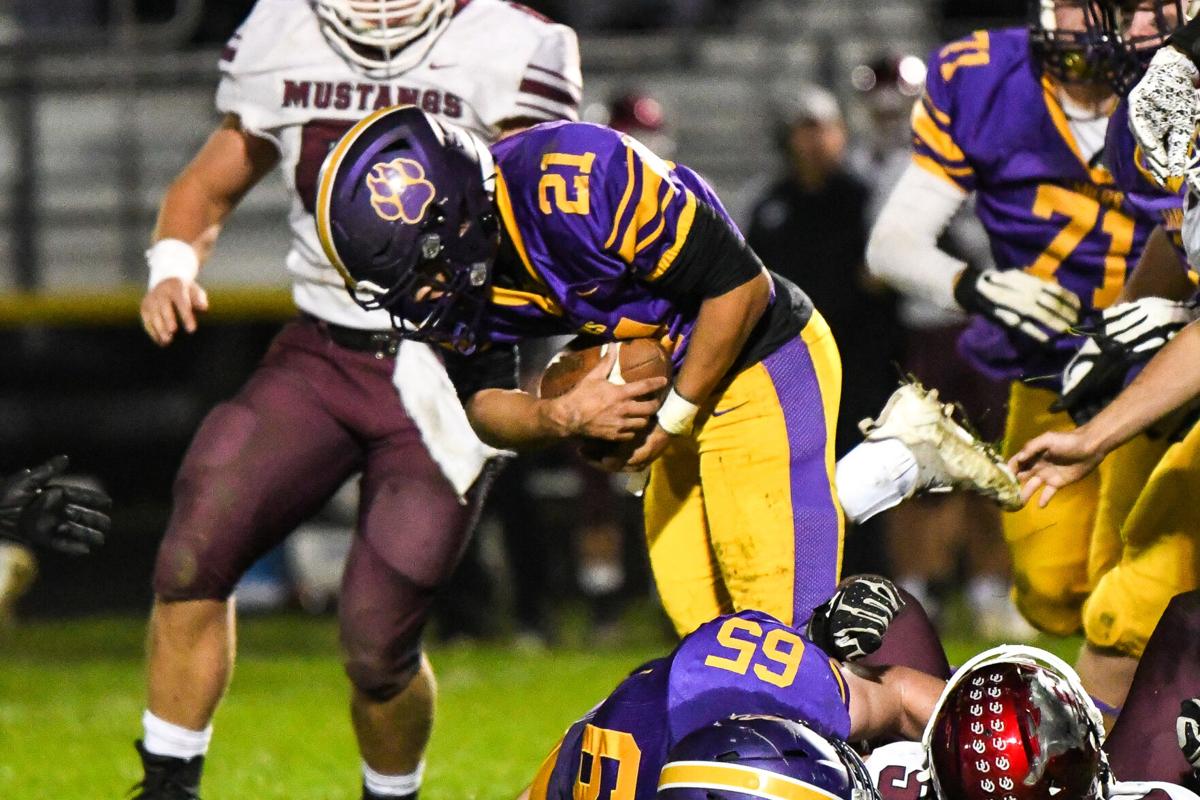 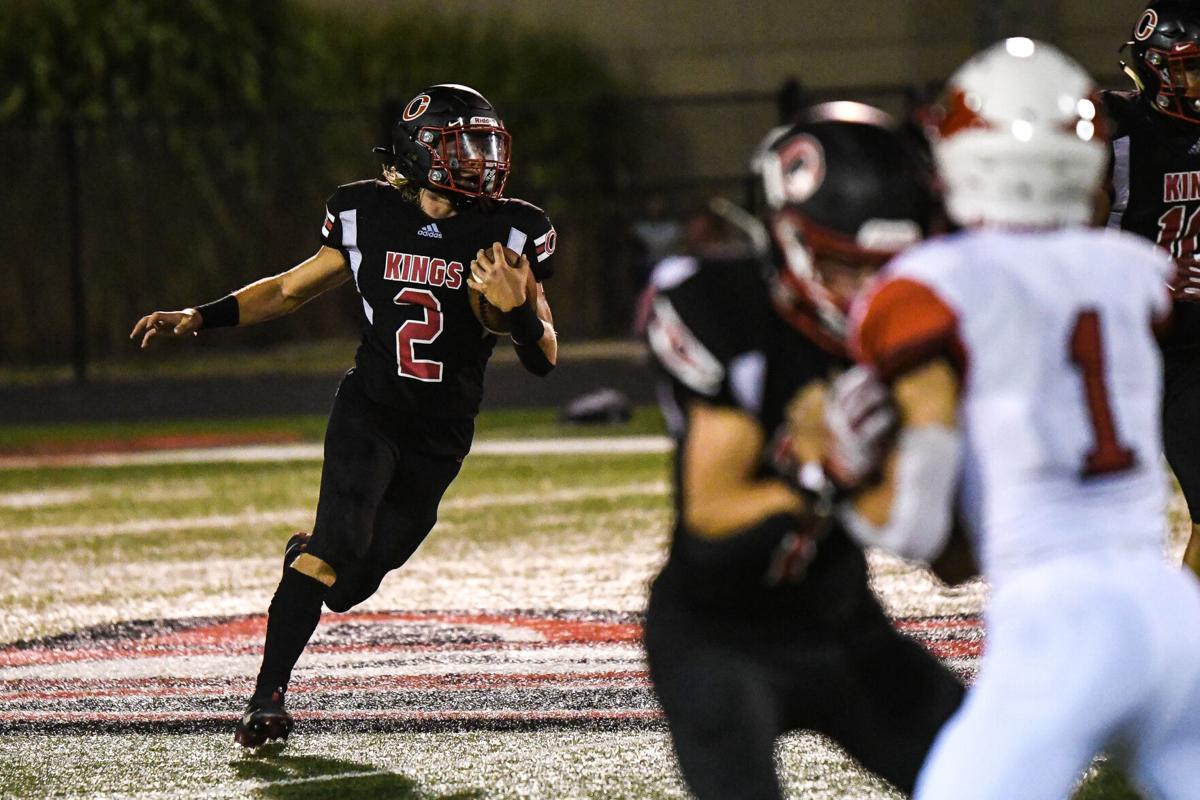 David Harper and Gibson McEwan try to make a tackle on Friday night during the Sabers’ loss to Mount Vernon.

DEWITT – The Central DeWitt football team had Mount Vernon on the ropes, but third quarter turnovers made their night end in a 34-14 loss at home Friday night.

The two were tied coming out of the locker room at halftime, and were through the first half of the third quarter. With five and a half minutes left in that third period, Mount Vernon made a 23-yard pass play to put in a touchdown and the Mustangs first lead of the game.

Just over five minutes later with seconds ticking down in the third quarter, the Mustangs had moved down field to just two yards out once again. With 5.5 remaining, they muscled their way through the DeWitt line to take the 28-14 lead.

The Sabers looked like they were in striking distance to cut that early in the fourth, but a pass attempt ended in Mount Vernon hands and they ran it in uncontested.

It was one of two interceptions in the second half.

“It was turnovers,” Streets said. “Turnovers are the biggest thing.”

“We could not tackle [Pitlik],” Streets said.

The Sabers struck early, with quarterback Paul Kuehn finding the hands of Lucas Burmeister on a long pass just over two minutes into the game.

The pass option worked multiple times for the Sabers throughout the game, and seemed to be open more times than not.

“We have to throw it quicker,” Streets said. “We held the ball a little bit too long at time tonight. He’s got to take three steps, throw it out there and let the guy run underneath it.”

After the Mustangs evened the score in the first quarter, the Sabers took it back. This touchdown came off a one-yard rush from Ben Pace.

The Mustangs scored on a fourth down in the last seconds of the half to set up their comeback in the third.

“That score right at the end hurt us,” Streets said. “But overall we played pretty well in the first half.”

Central DeWitt (5-3) has one more week of play, traveling to a district-leading Benton Community in Week 9.

LANSING – The Easton Valley football team rallied on the road on Friday night to take down Kee 51-46 and end their regular season with a perfect record.

The River Hawks have only lost two games in their last 24, including their 8-0 streak this year. Kee had also come into the Friday night contest undefeated.

It was Kee who started things off scoring-wise, and it was Kee who led most of the first half. The River Hawks kept pace, never trailing by more than two scores.

Charlie Simpson rushed for five touchdowns for the River Hawks, finishing with 186 yards on the night on 35 carries.

This is the first perfect regular season record for the Easton Valley 8-man program.

Easton Valley (8-0) will wait for their 8-man playoff matchup. The pairings are set to be released Saturday morning.

Camanche ends season with a win

CAMANCHE – The Camanche Storm ended their season with a home win heading into the playoffs, downing Tipton 34-14 on Friday night.

It’s the second straight win for Camanche and their fifth in the last six games.

The Storm (5-3) await their Class 2A playoff bracket. Playoff pairings are set to be released on Saturday.

MOUNT PLEASANT – The Clinton River Kings added a win to their record Friday night, dominating Mount Pleasant 49-7 on the road.

The two district opponents started the game neck-and-neck, with the score tired at a score a piece. Clinton continued on from there to score 42 unanswered throughout the rest of the game.

A lot of offensive production came in the air for Clinton. Quarterback Jai Jensen had over 200 passing yards before the half was up.

LANARK, Ill. – The Fulton Steamers won their second straight and picked up their sixth win of the year with a dominant 63-14 win over Eastland-Pearl City in Lanark on Friday night.

The Steamers were dominant from the get-go, with scores coming from multiple players throughout the contest.

The No. 5 Fulton football team was coming off of an upset win over Forreston.

Fulton (6-2) returns home to round out their regular season, welcoming Dakota to their turf.