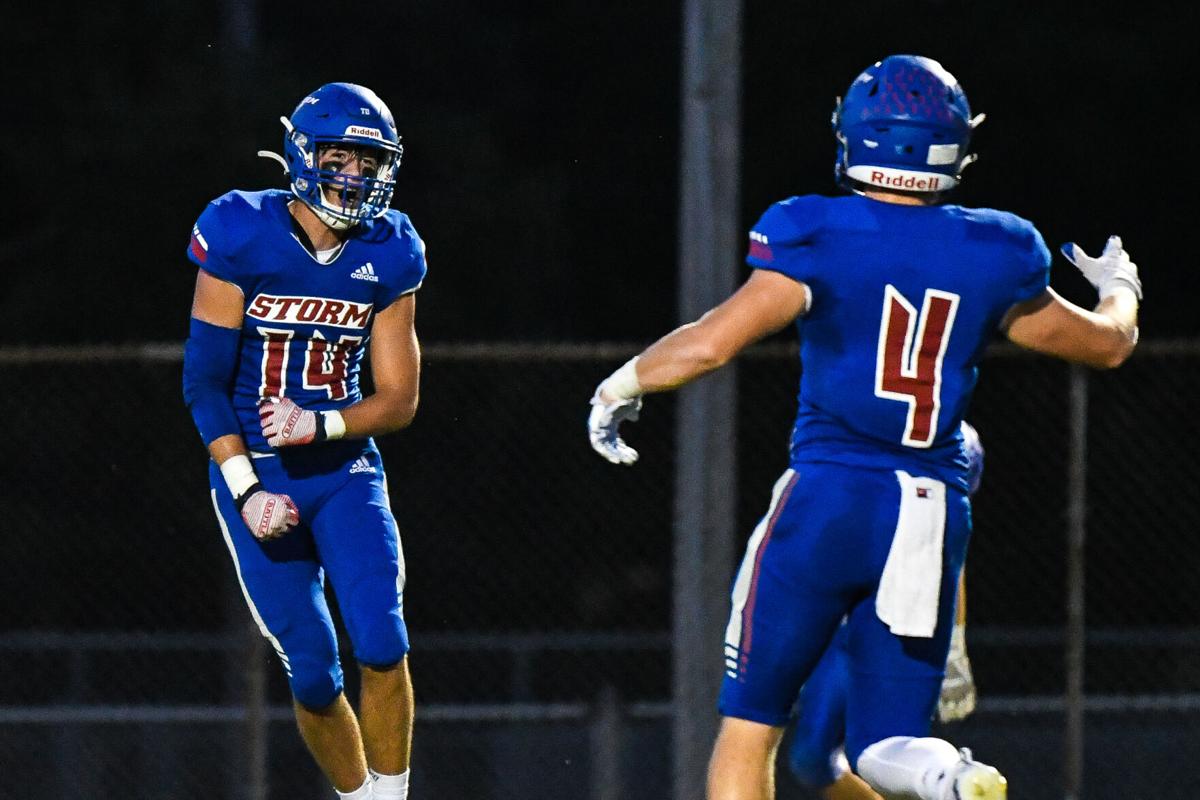 Camanche’s Garrett Schultz (14) celebrates after running an interception in for a touchdown to take a 14-0 lead over West Liberty in the first quarter Friday night. The Storm would go on to beat the Comets 44-36. 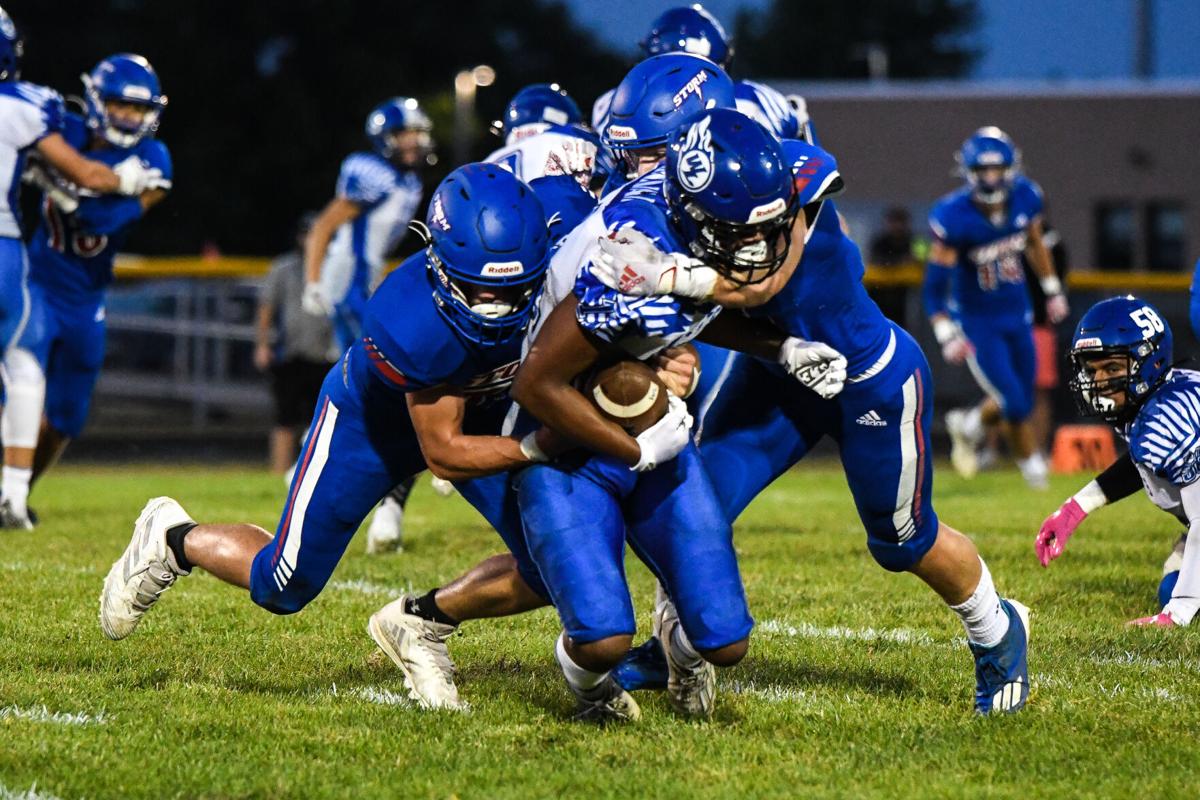 Camanche defense collapses on West Liberty running back Jahsiah Galvan during the Storm’s 44-26 win over the Comets on Friday. 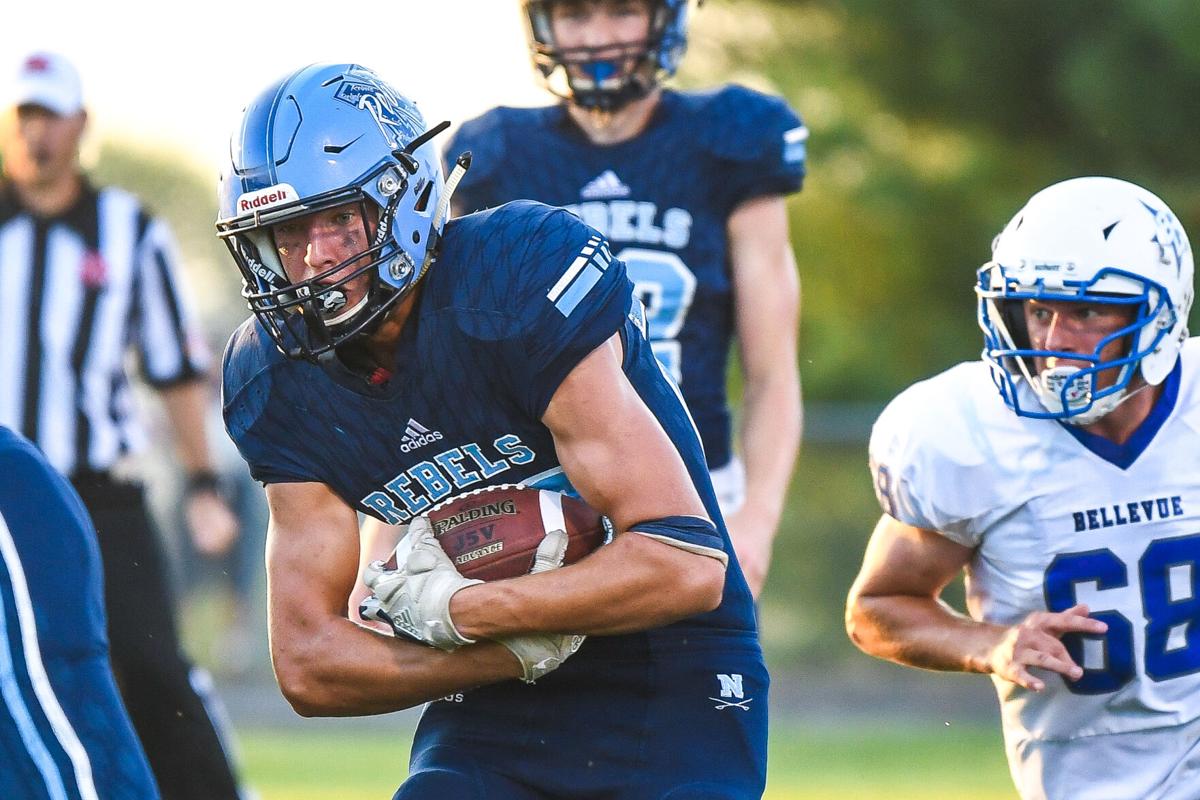 In this Herald file photo. Northeast’s Caleb Gruhn carries the ball on a rush attempt during the Rebels’ Week 1 game against Bellevue. The Rebels pulled out a 42-41 overtime win on homecoming night Friday over Anamosa.

Camanche’s Garrett Schultz (14) celebrates after running an interception in for a touchdown to take a 14-0 lead over West Liberty in the first quarter Friday night. The Storm would go on to beat the Comets 44-36.

Camanche defense collapses on West Liberty running back Jahsiah Galvan during the Storm’s 44-26 win over the Comets on Friday.

In this Herald file photo. Northeast’s Caleb Gruhn carries the ball on a rush attempt during the Rebels’ Week 1 game against Bellevue. The Rebels pulled out a 42-41 overtime win on homecoming night Friday over Anamosa.

CAMANCHE – A slew of interceptions helped the Camanche football team pick up their second straight with a 44-26 win over West Liberty at home on Friday night.

The Storm started off the game hot. A few big third down plays kept their first drive moving and it ended with a score. Under pressure, quarterback Michael Delzell launched a 14-yard pass into the corner of the endzone where it was pulled down by Garrett Schultz.

Four minutes later, Schultz once again was the difference maker. Schultz picked off a West Liberty pass attempt near the 30 yard line and took it all the way in to extend the Camanche lead. A good conversion this time, Delzell to Eric Kinkaid, gave them the 14-0 lead.

The Comets were the ones to score 14 unanswered points after that. The defense struggled to get their hands on West Liberty running back Jahsiah Galvan and he kept the play moving. A pass play scored their first touchdown.

The Storm managed to grab the lead back before halftime hit. Under a minute to go, the Comets went for a fourth down and the pass attempt was intercepted by Ethan Schultz on the West Liberty 44-yard line.

After a big pass to Adam Dunlap put Camanche on the 17, Delzell found Ethan Schultz again in the middle of the field and Schultz pushed through traffic and across the goal line.

Another pass to Schultz completed the 2-point conversion and gave the Storm the 22-14 lead at half.

West Liberty came out of the gates and scored almost immediately in the third quarter, but the Storm answered with a big kickoff return. It took just two plays for them to find the endzone, and another two point conversion put them ahead 30-20.

With two and a half minutes left in the third quarter, Galvan made a few more huge plays for the Comets and they managed to tie the game up 30-30.

The two exchanged scored again in the final 12 minutes and ended up tied at 36-36 with nine minutes remaining. The score would remain there until a pick six by Camanche with 3:26 left to play put the Storm ahead 44-36, where it would remain through the end of regulation.

The Storm (2-2) travel next week, heading to Anamosa for Week 5.

GOOSE LAKE – The Northeast homecoming game ended in thrilling fashion on Friday night with the Rebels pulling out the 42-41 overtime win over Anamosa in Goose Lake.

The two went into overtime tied 34-34. The Raiders scored first, but the Rebels found the endzone and came through with the conversion to give them the one point advantage.

That was after a comeback effort by Northeast during regulation. The Rebels trailed 20-10 at the half and 27-19 after three quarters of play. They tied the game to force extra minutes.

The Rebels (2-2) take to the road next Friday, traveling to Tipton.

MARION – The Central DeWitt football team lost their first of the year, dropping a game 20-7 to Marion on the road.

The Sabers led Marion at the half after 24 minutes of defensive battle. Central DeWitt took the 7-6 lead into the locker room.

Marion scored 14 unanswered points in the second half – one touchdown in each quarter – to take the win.

The Sabers (3-1) will play a Thursday game next week, traveling to Davenport Assumption for their next district matchup.

SPRINGVILLE – Another dominant performance kept the Easton Valley football team with a perfect record after a win over Springville on the road Friday night.

It’s the third season in a row the River Hawks have started with a 4-0 record.

In less than five minutes of play, the River Hawks went up 21-0 over the Orioles. They scored 28 unanswered points, not allowing Springville to put points on the board until the end of the first quarter.

Two long passes for touchdowns started the second quarter for the River Hawks. By halftime, it was 54-12.

The No. 4 River Hawks (4-0) head back to Preston for Week 5, hosting their 2021 homecoming game against Central City next Friday.

It was the first win of the season for Hall.

The Red Devils had scored 12 points before the Mustangs struck. By halftime Hall had taken the 31-6 lead.

The Mustangs (0-4) keep to the road for Week 5, taking the bus to Sherrard High School next Friday.